Effect of Acupressure on Postoperative Nausea and Vomiting in Laparoscopic Cholecystectomy

Objective:To ealuate the effectiveness of acupressure applied at meridian P6 point for prevention of nausea and vomiting in patients undergoing laparoscopic cholecystectomy.
Methodology:A randomized double blind study was performed in 50 ASA I and II patients scheduled for laparoscopic cholecystectomy. Patients were divided into two groups; control and placebo. In the control group acupressure was applied at P6 point half an hour before surgery while in the placebo group the acupressure band was tied on meridian P6 point but the plastic bead was placed on the dosum of right forearm away from meridian P6point. Patients were assessed for nausea and vomiting for six hours after surgery. Anaesthetic technique and postoperative analgesia were standardized for all patients.
Results:Results showed that the incidence of postoperative nausea and vomiting was 36% in the treatment group and 40% in placebo group, which is statistically insignificant.
Conclusion:Application of acupressure at P6 point half an hour before induction of anaesthesia does not significantly alter the incidence of postoperative nausea and/or vomiting within 6 hours after surgery (JPMA 53:68;2003).

This was a prospective, randomized, double blind study. After approval from ethical review committee of the Aga Khan University Hospital and informed consent of patients, we enrolled 50 ASA I and II physical status male and female patients between the ages of 18 and 60 years undergoing laparoscopic cholecystectomy. Obese patients (weight more than 80 kg), diabetics, patients with history of postoperative nausea and vomiting, patient receiving antiemetics and patient receiving histamine H2 antagonist were Figurc 3. Application of acupressure band and bead to bhc wrist in treatment group.-excluded from the study. Patients were randomly assigned by random table number to either group-i (control group) or group-TI (placebo group). Wristbands (Acupressure band) and plastic beads were used for the application of acupressure (Figure 1). 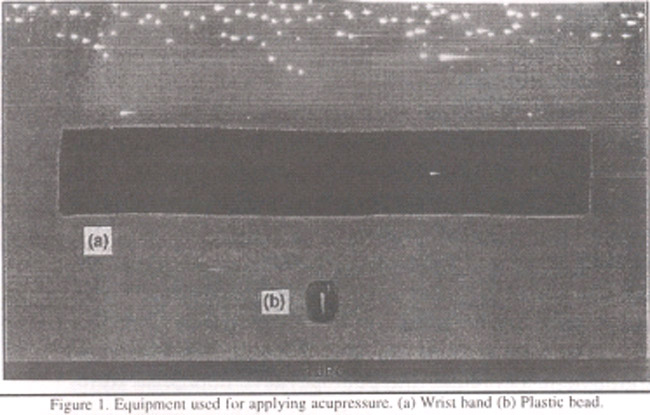 Meridian P6 point which is located on the anterior surface of forearm, 2 inches proximal to distal wrist crease between tendons of flexor carpi radialis and palmaris longus (Figure 2) 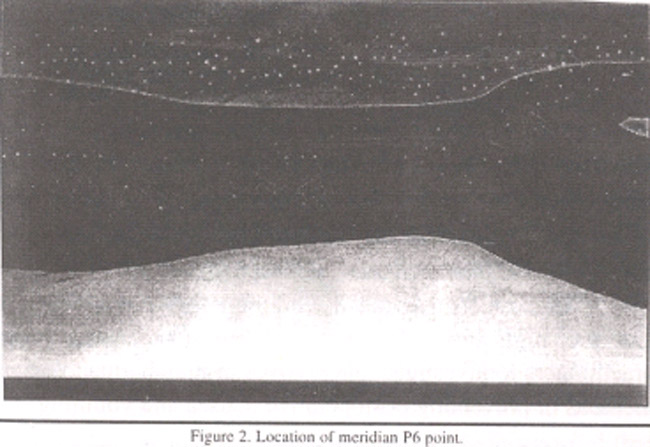 was used as the treatment point. In group I pressure with plastic bead was applied to meridian P6 point with acupressure band on right hand by one of the investigators
Figure 4. Application of acupressure band and bead to the wrist in placebo group.
(who was not involved in the anaesthetic and recovery room management of the patient) half an hour before induction of anesthesia (Figure 3), 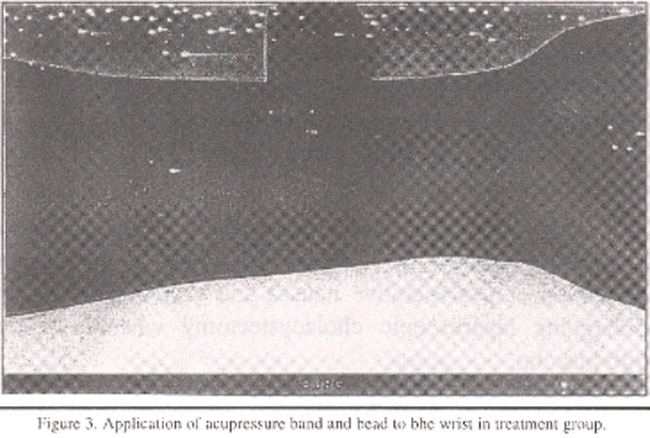 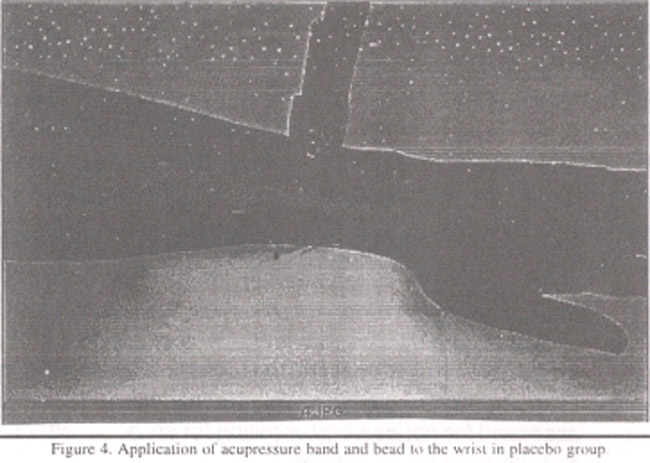 Anaesthetic technique was standardized for all patients. Patients received tablet midazolam 7.5mg premedication 1 hour before operation. Pethidine 0.8-1 mg/kg was administered intravenously as pen-operative analgesic. Anesthesia was induced with thiopentone 5mg/kg of body weight. Neuromuscular block for Endotracheal intubation was provided with vecuronium 0.1mg/kg. Anesthesia was maintained with enflurane 0.6-1%. Circle system was used with low flow anesthesia 3 liters/minutes with oxygen nitrousoxide ratio of 33:66. All patients were ventilated with controlled mode of ventilation with respiratory rate of 12-14/ minutes and tidal volume of 8-10 mI/kg, to keep end tidal carbondioxide between 30-35 mmHg. Routine monitoring was done with Datex Monitor observing ECU lead II, Oxygen saturation, non-invasive blood pressure monitoring, and end tidal carbondioxide. At the end of the surgical procedure. wound was infiltrated with 8-10 ml of 0.25% bupvicaine. Patients were extubated in the operating room after reversing with neostigmine 2.5 mg and atropine 1mg. A blinded observer in the recovery room (one of the investigator not involved in applying acupressure band) evaluated the patients for presence of nausea and vomiting for 1-2 hours in the recovery room and for 4-5 hours in the wards. During observation patients complaining of nausea or vomiting, metaclopramide 10 mg was given intravenously and the observation was abandoned. Pethidine 10 mg was given intravenously to those patient who complained of pain and observation was continued.
Statistical Analysis
Data was analyzed using the SPSS statistical package. Repeated measures ANOVA was applied to see the difference in the two groups as well as the effect of time in each. The physical characteristics of the two groups were assessed using
the unpaired t- test. Groups were compared separately tör nausea and vomiting after surgery. Pearson’s chi-square test was used to investigate the association between nausea and vomiting in control group and placebo group. P<0.05 was considered statistically significant.

Twenty-five patients were included in each group, the control group (group I) and placebo group (group II) undergoing laparoscopic cholecystectomy. There was no statistically significant difference with respect to age, sex, weight and duration of surgery between the two groups (Table 1). 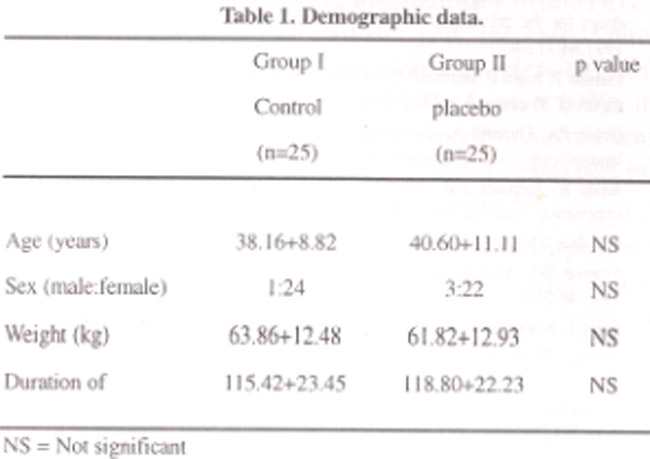 The incidence of postoperative nausea was recorded hourly for six hours (Table 2). 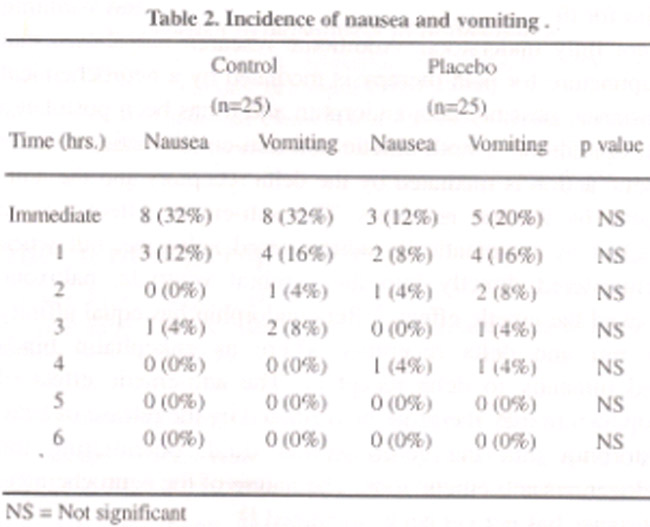 The incidence of nausea immediately after surgery was 32% and 12%, in first hour 12% and 8%, in second hour 0% and 4%, in third hour 4%,and 0%, in fourth hour 0% and 4% in control group and placebo group respectively, which is statistically insignificant when both groups are compared. Similarly, in fifth and sixth hour, none of the patient had nausea in either group.
The incidence of postoperative vomiting was recorded hourly from immediate to six hours (Table 3). 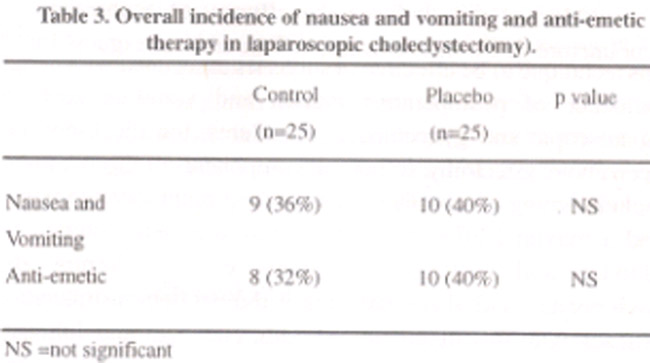 The incidence of vomiting was 32% and 20% immediately after surgery, 16% and 16% in first hour, 4% and 8% in second hour, 8% and 4% in third hour, 0% and 4% in fourth hour in control group and placebo group respectively, which is statistically insignificant when both groups are compared. Similarly, in fifth and sixth hour, none of the patient had vomiting in either group.
The overall incidence of nausea and/or vomiting was 36% in control (Acupressure) group and 40% in placebo group in laparoscopic cholecystectomy (Table 3). All patients received an antiemetic who complained of nausea and/or had vomiting immediately after first episode in either group (Table 3).

Laparoscopic cholecystectomy was first described in the literature by Perissat et al.9 Laparoscopic cholecystectomy combines the benefit of completely removing the gall bladder with the advantages of shorter hospital stay, more rapid return to normal activities, less pain associated with the small incisions and less postoperative ileus as compared the traditional open cholecystectomy.4 It has become an accepted procedure for symptomatic cholelithiasis. However, in current surgical practice high incidences of postoperative nausea and vomiting upto 53%-72% has also been reported10 with the procedure.
The etiology of nausea and vomiting after laparoscopic cholecystectomy is not fully understood. Risk factors such as a long period of carbondioxide insufflation, gall bladder surgery, intraoperative use of inhalation agents, female sex and postoperative use of patient controlled analgesia may contribute to these episodes.
Acupuncture is an ancient Chinese art and Asian medical treatment that has been practiced for more than three thousand years and has been used in various settings including travel and motion sickness and postoperative emesis.11 The mechanism of acupressure or acupuncture at the P.6 meridian
point for the prevention of postoperative nausea and vomiting is not fully understood. Additional research has shown that acupuncture for pain therapy is mediated by a neurochemical substance, possibly beta-endorphin and it has been postulated that opioids have both emetic and anti-emetic actions.12 The emetic action is mediated by the delta receptors and the anti-emetic by the mu receptors. The anti-emetic effect can be blocked by systematically administered naloxone, but when administered directly into the cerebral ventricle, naloxone blocked the emetic effect.12 Beta-endorphin has equal affinity for mu and delta receptors where as enkephalin binds predominantly to delta receptors. The anti-emetic effect of acupuncture may therefore be mediated by the release of beta­endorphin into the cerebrospinal fluid, potentiating the endogenous anti-emetic tone. The nature of the neurochemical substance has not yet been elucidated.12
Most studies indicate the efficacy of acupressure or acupuncture at P6 meridian point. Fan and colleagues8 found this technique to be effective in surgeries associated with a high incidence of postoperative nausea and vomiting such as laparoscopic and gynecologic procedures, tonsillectomy and open cholecystectomy. Important components of this treatment include timing of stimulation and correct point location which had a maximal effect in first hour as was demonstrated by Dundee and colleagues.13 Lewis et al14, Yentis and Bissonnette15 and Shenkman et al.16 did not demonstrate good efficacy with this treatment. Al-Sadi, Newman and Julious12 found this technique effective after induction of anesthesia but before opioid administration. The possible reasons for poor results could be the inaccurate localization of P6 meridian point or wrong timing of the P6 activation. The maximum levels of beta endorphin occurs twenty five minutes after P6 meridian point stimulation, which in turn desensitizes the chemoreceptor trigger zone in the brain and prevents post-operative nausea and vomiting caused by inhalation anesthetics or chemotherapeutic drugs. However once the chemoreceptor trigger zone is sensitized, it is difficult to overcome or desensitize it by the neurochemical substance.12 This may explain why acupressure, in treating nausea and vomiting, must be applied before the emetic stimulus has been initiated. In our study we eliminated this possibility by applying pressure to meridian P6 point in waiting area half an hour before surgery.
A wide variety of factors influence the incidence of postoperative nausea and/or vomiting in laparoscopic cholecystectomy and bias from these must be eliminated from a study for the management of postoperative nausea and/or vomiting to draw valid conclusions. Risk factors such as age and sex of patient, obesity, history of postoperative nausea or vomiting or motion sickness, duration of surgery, use of anaesthetic drugs specially inhalation and opioids may contribute to these episodes. We controlled these risk factors
within the study design. Duration of anesthesia and surgery and anaesthetic drugs used were similar in both groups. Similarly, age, weight and sex distributions were similar in both groups.
Various methods for scoring the severity of nausea and vomiting have been described. The purpose of this study was to establish whether acupressure applied preoperatively has any antiemetic effect postoperatively, therefore severity of nausea and vomiting was not measured. Failure to prevent postoperative nausea and/or vomiting was defined as one spontaneous report of nausea and /or one episode of vomiting postoperatively within six hours.
In our study we applied acupressure on right hand, however in literature both hands for acupressure or acupuncture have been used. There are evidences which showed that best results of acupressure were obtained by the use of dominant hand.13
Most recently Wang et al10 reported 63% incidence of postoperative nausea and vomiting in laparoscopic cholecystectomy in control (saline) group which is higher than we found in our study, 36% in control group and 40% in placebo group. There was almost no difference in incidence of postoperative nausea and vomiting in both groups indicating that acupressure had no effect on postoperative emesis. All patients received an antiemetic who complained of nausea and/or had vomiting immediately after first episode that is 32% in control group and 40% in placebo group. There were no side effects or complications caused by placement of the acupressure band in either group.

In conclusion, our study showed that acupressure for prevention of postoperative nausea and vomiting is ineffective in laparoscopic cholecystectomy even applying before emetic stimulus.

Prevalence of Anxiety and Depression among Medical Students of Private University

Lipoprotein (a) and Glycaemic control in Pakistani Subjects with Diabetes Mellitus