Objective:To grade prostatic carcinomas according to the Gleason’s Grading System and see whether the frequency of incidental carcinoma is significant.
Method:Retrospective study of all consecutive cases of prostatic adenocarcinoma diagnosed at Aga Khan University Hospital (AKUH) between January 1st, 1996 and December 31st, 1999.
Setting:The histopathology section of AKUH, Karachi.
Observation:Prostatic adenocarcinomas comprised 14.2% of all prostate specimens. There were 3 types of specimens i.e. transurethral resection, suprapubic prostatectomies and core bIopsies. The mean age was 72.1 years; 68.1% patients were 65 years or older. The majority of the tumours were moderately differentiated (Gleason’s scores 5,6 or 7). Grading was not possible in most core biopsies. The frequency of Incidental carcinoma was 31.4%.
Conclusion:Majority of tumours were moderate to poorly differentiated, Indicating that prostatic adenocarcinoma Is an aggressive disease. The frequency of incidental carcinoma was also high emphasizing need for more aggressive prostatic evaluation in the vulnerable age group (JPMA 52:54;2002).

World wide, carcinoma of the prostate is the most common cancer and the second leading cause of cancer death in males i.e. 10%1, The age-adjusted incidence is on an increase in most countries. Hormonal factors (androgens) are believed to play a role in the development of prostate cancer2. Various Pakistani studies on spectrum of malignant tumours in males have given varying results on the frequency of prostate cancer in the country3-6. According to first report from Karachi Cancer Registry, prostatic adenocarcinoma ranks at number six among cancers in males in Pakistan7. Most cases of prostate cancer are seen in men above age 50 years. The incidence of latent’prostatic cancer (i.e. when a microscopic focus of cancer is discovered as an incidental finding, either at post mortem examination or in a surgical specimen removed for other reasons e.g. nodular hyperplasia) is even higher8. According to Western data, carcinoma of prostate is more common in USA and other Western countries as compared to Asia where rates are very low9. There is a tendency for the incidence of prostate cancer to increase in populations with low incidence rate when they migrate to a high incidence locale, showing that environmental influences play a role in the development of this disease1. Approximately 70% cancers arise in the peripheral zone of the prostate - whether posteriorly, laterally or anteriorly and tend to spare the periurethral region except in late stages10. The Gleason’s grading system is currently the preferred system, for the grading of these tumours11,12. It has shown a remarkable correlation with mortality rates. Patients with a score of 2 to 4 do not develop aggressive disease whereas most patients with a score of 8 to 10 die of it13. A reasonably good correlation exists between the tumour grade determined by biopsy and that determined by prostatectomy4.
The aim of our study was to determine the grading of prostatic adenocarcinoma in our practice according to Gleason’s grading system and to see whether the frequency of incidental carcinoma was significant.

The study was conducted in the section of Histopathology, Aga Khan University Hospital (AKUH). All cases of prostatic adenocarcinoma diagnosed between January 1st, 1996 and December 31st, 1999 were included in the study. The types of specimen included transurethral resection (T.U.R.) specimens, transabdominal suprapubic resection specimens and core biopsy specimens. These cases included AKUH inpatients and specimens received from all over Pakistan via various AKUH collection points. All specimens were fixed in10% buffered formalin, routinely processed under standardized conditions for paraffin embedding, sectioned and finally stained with Hematoxylin and Eosin using standard procedures. The tumours were graded according to the Gleason’s grading system11. 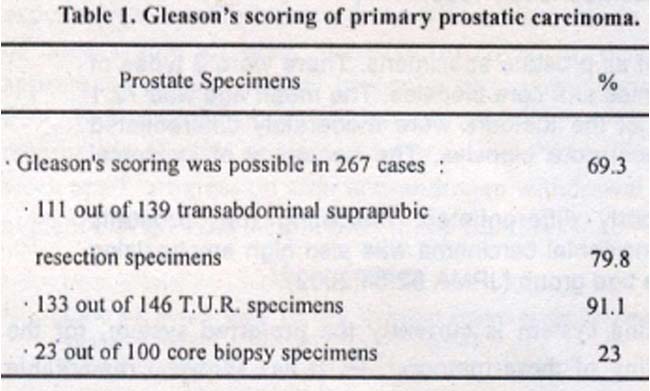 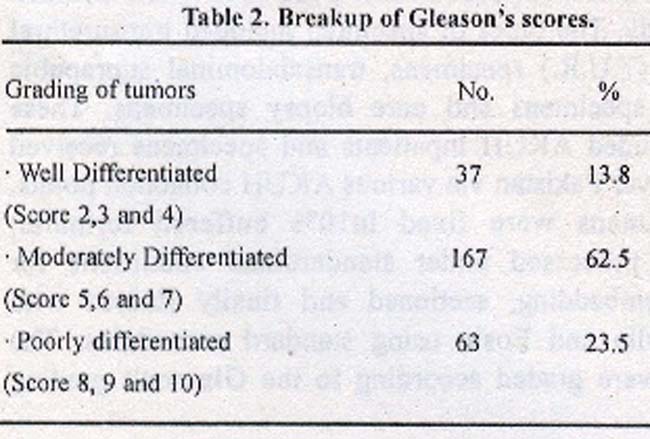 According to Western Studies, adenocarcinoma of the prostate is much less common in Asia as compared to the West9. Results of various Pakistani studies3-6 are inconclusive. According to the initial results from the Karachi Cancer registry7, prostatic adenocarcinoma ranks at number six among malignant tumours in males. In the West, with the widespread use of serum PSA testing, the number of nonpalpable cancers diagnosed by needle biopsy has markedly increased15. In our country also, the use of needle biopsy as a diagnostic modality is increasing. The usual practice is to send six core biopsy specimens in separate containers, i.e., from right apex, right mid, right base and left apex, left mid and left base of the prostate (Sextant biopsies). Thin14  gauge trucut needles are used. The biopsy is performed by the transrectal route with or without ultrasound guidance. However, the largest number of specimens are still T.U.R. and suprapubic resection, which are used as both diagnostic and therapeutic modalities.
The selection of T.U.R. vs suprapubic resection is the surgeon’s prerogative. Curative radical prostatectomy is still very limited. In our study the mean age of patients was 72.1% years and more than 68% patients were 65 years or above. This corresponds to the Western data1.
As shown in Table 1, Gleason’s scoring was possible in 267 out of the total 385 cases (69.3%); in over 90% of T.U.R. specimens and almost 80% of suprapubic resection specimens. But it was possible in 23% of needle biopsy specimens. In another 52 cases (13.5%), Gleason’s grading was not possible but these cases were classified as well, moderately or poorly differentiated. In 64 cases (17.2%), no grading was possible. The reasons for inability to grade lesions included the small size of specimen (in core biopsies) or limited foci of adenocarcinomas (in suprapubic + T.U.R. specimens). In the West also, false negative rate with core biopsies is approximately 25% (from 12 to 28%) due to limited amount of tissue present16,17. As indicated in the results, incidence of latent prostatic cancer was high (3 1.4%). In these cases, surgeon was suspecting benign nodular hyperplasia and carcinoma was instead discovered on biopsy. Tumour may be clinically unsuspected because:
(a) there may be only small amounts of scattered tumour, (b) the tumour may be predominantly centrally or anteriorly located, (c) the tumour may diffusely infiltrate prostate without resulting in induration or a clinically detectable nodule or (d) the tumour may be well defined and peripherally located but still not palpable for reasons unknown18. It is imperative that in any case of carcinoma prostate, digital rectal examination must be supplemented by transrectal ultrasound and serum PSA levels. This may help in significantly reducing the magnitude of incidental carcinoma found later. The large majority of cases in which Gleason’s grading was performed were moderate to poorly differentiated (Table 2). This shows that the large majority of prostatic adenocarcinomas in our country behave aggressively as the Gleason’s grading system shows a remarkable correlation with mortality rates13. As shown in the results, no cases of PIN (Prostatic Intraepithelial Neoplasia) were diagnosed. The main reason is that, as in other organs we see mostly advanced disease in our country. Yet, now that the histologic criteria for PIN are well established19, biopsies should be more critically evaluated so that cases of PIN are not missed.