Objective:To evaluate the results of T4, TSH analysis and pattern of presentation in babies born at our hospital.
Method: We retrospectively reviewed, the data collected from T4, TSH screening on all babies delivered at our Hospital, where the blood was drawn within the first 4 days of life. Period under evaluation was from October 1995 to October 1998. Shifa Reference values were used.
Results:Blood sample were collected from 997 babies within 4 days of birth. Nine hundred and forty nine (95.2%) were evaluated after 24 hours, and 48(4.8%) in less than 24 hours of age. A high TSH was reported on 166 (16.8%) babies and a low T4 was reported on 78 (7.9%) babies. Statistical analysis showed a similar sensitivity for T4 and TSH (100%) but a higher specificity for T4 (93.1%) as compared to TSH (86%). A high TSH with a low T4 was reported in 5 (0.5%) babies out of which 1 case was confirmed as congenital hypothyroidism requiring permanent thyroxin replacement and One case manifested a picture consistent with transient hypothyroidism. A low TSH with a low 14 was seen in 2 cases, however, they were all premature babies on antibiotics.
Conclusion:Congenital hypothyroidism may be more frequent in our population and for the purpose of screening babies T4 values would carry a higher positive predictive value than TSH. Combining T4 TSH assays would however reduce the call back rate quite significantly but may prove to be a bit more expensive (JPMA 52:58,2002).

Cretinism (congenital hypothyroidism) and the benefits of its treatment have ‘been known since as early as 1897, however it was not until the 1970’s that a systematic neonatal screening program was first implemented, a practice which is now prevalent in many countries of the world1. Arguments exist both for and against these programs however the protagonists of the program give strong arguments in terms of its long-term financial and medical benefits. In Pakistan due to financial implications and may be other factors as well, there is no national neonatal screening program for congenital hypothyroidism. However a few hospitals have implemented such programs in their set-ups.
In the absence of a national thyroid screening program any data pertaining to the thyroid profiles of our population will be useful in ascertaining the extent of the problem. At Shifa International Hospital we have established an up and running screening program for congenital hypothyroidism since October 1995 (where all neonates delivered in the hospital have T4 TSH assays performed prior to discharge as part of the overall neonatal package). Like all such programs the world over, we too are in a learning curve and present our experience over the past 3 years.

We reviewed the 14 TSH profiles of all babies born at Shifa International Hospital between the period October 1995-October 1998, where the blood samples were collected before the 4th day of life. This service is offered to all mothers delivered at the hospital as part of routine neonatal care. The venous samples were analyzed using a chemiluminescent enzyme immunoassay technique (Immulitte) on a weekly basis. Results were conveyed to the parents and necessary steps taken (if so required) at the 7th day OPD review of the baby. Analysis was done at Shifa Laboratories under strict quality control. Shifa Reference values were used for the evaluation (14 = 11.74 - 25.3 mcg/dl, TSH 1.19 - 15.73 mcg lU/mi).

During the three-year period 1240 babies were delivered at the hospital. Based on our inclusion/exclusion criteria we reviewed 997 records, 243 patients were excluded from the study for various reasons related to our exclusion criteria and in some cases due to parental refusal to have the test done.
Our results showed the following : Nine hundred and forty nine (95.2%) of tests were done after the first 24 hours of life with the majority being done on the second or’ third day i.e. before discharge (Table 1). 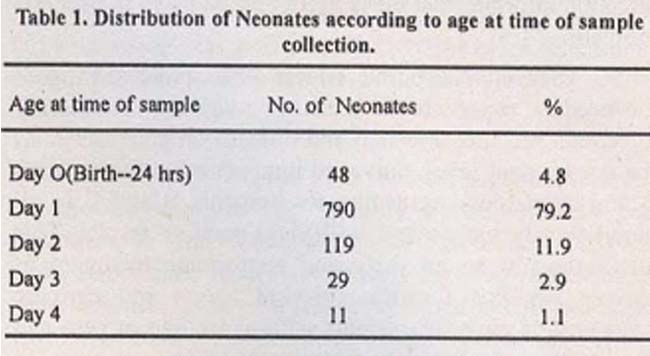 High TSH was recorded in 166 (16.8%) and low 14 in 78 (7.9%) babies.
Using High TSH and low T4 as gold standard and a standard 2 by 2 table, T4 estimation had a higher specificity (93.1%) and efficiency rating (93.1%) than TSH suggesting that the positive predictive value of T4 estimation (6.4%) was higher than that of TSH in our series. Because of the absence of any false negative values we could not comment on the difference of sensitivity rating between the two tests (Table 2). 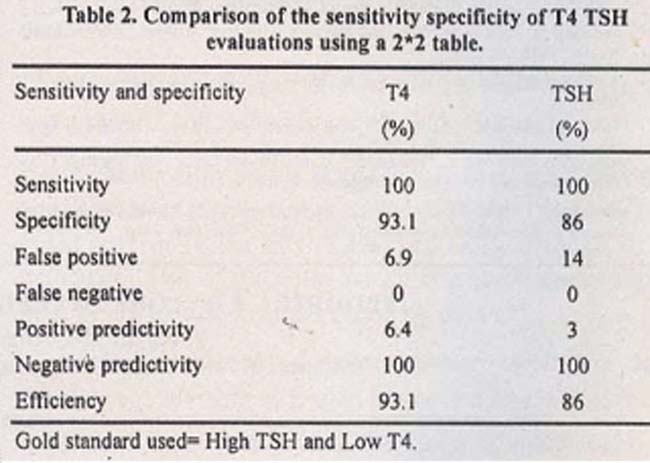 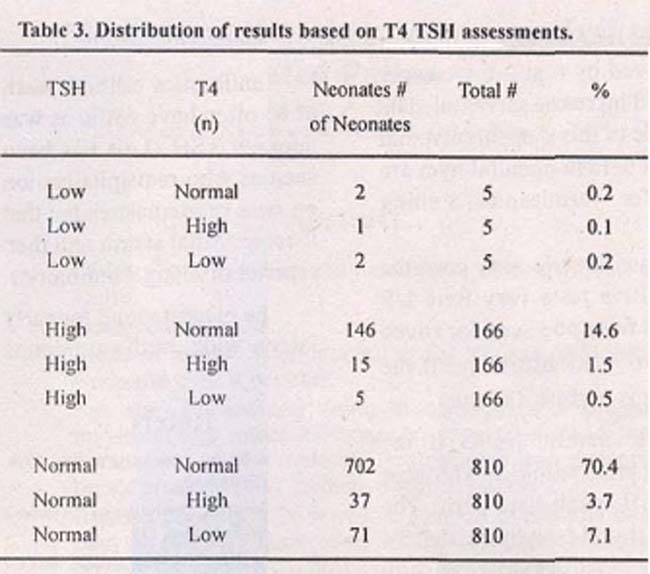 On secondary screening one was confirmed as a case of Congenital Hypothyroidism and given thyroxin replacement therapy. One baby showed a picture resembling transient hypothyroidism where the mother was on neomercazole therapy and the T4 TSH reverted to normal at 2 months age. Three cases were lost to follow up and could not be rescreened. The low TSH, low T4 situation was observed in two cases both cases were on antibiotics and hospitalized at the time of blood sampling .One case was suspected of Trisomy but further evaluation was refused by parents (Table 4). 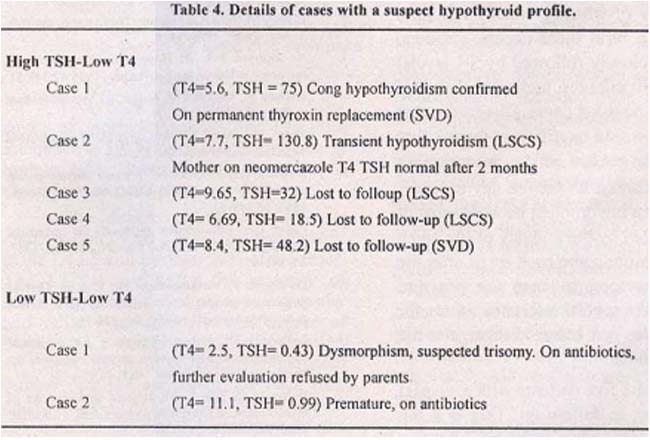 The reported incidence of congenital hypothyroidism is between1 per 3000-4000 births2,3. However there is a considerable geographical variation in the distribution of this problem. The incidence in the Middle East is I :20004,5 and in Karachi 1:1000 births6. Our own data also is suggestive of figures somewhat similar to the Karachi experience6. This fact in itself is quite alarming because the nature of the disease requires an early diagnosis. It is most tragic that in a study quoted by INMOL Lahore where out of 74 children clinically suspected of hypothyroidism only five cases were referred at a stage where replacement therapy could be of some help7.
Neonatal thyroid screening is being done in several countries throughout the world since 1970s. However there has always been a controversy as regards to the modalities of the program so as to keep it an efficient and cost effective screening tool. In this regard the North American approach has been the T4-Supplemental TSH strategy, the Europeans have been following the TSH-supplemental T4 approach. Of course the proficiency of the screening program is ideally represented by combining T4 and TSH analysis, which however would increase the cost of the program. A review of the literature shows that whether one uses the European or the North American approach the false positives and false negative ratios remain almost the same8.
The alarming aspect of this problem is that less than 5% cases of Congenital Hypothyroidism can be detected on clinical grounds alone at an age where effective steps can be taken to- prevent long term sequelae2. Regardless of whichever approach is used 3-14% cases of delayed changes also get missed9,10. The sensitivity of the tests can be improved by repeating them at 2-6 weeks age, however this would increase the cost of the screening program11. The magnitude of this problem is also apparent from the fact that in the US 6-12% of cases of congenital hypothyroidism are missed for various reasons despite a good screening program12.
The screening process is also confounded by the false positive results, which are very frequent. In the US about 4-8 false positive cases are seen for every one proven case9, The incidence of false positive results is high if the screening is performed within 24-48 hours of life13.
The main problem that seems to confound the screening program is the physiological variations that occur in the TSI-I levels in the immediate perinatal period. The neonatal thyroid tissue begins synthesizing TSH and T4 hormones independent of the maternal axis from the 20th week of gestation, the levels of which gradually rise upto term. Immediately following birth there occurs a sudden sharp surge of TSH levels (closely followed by T4 levels) reaching a peak in the first 30 minutes, thereafter followed by a gradual decline over the next 3-4 days. This means that the normal reference values would be different for the first few days and this is also the reason why most screening programs prefer to draw samples after the 4th day of life13. In our set-up this would pose a big problem because most of our babies would be discharged by the 2nd day of life and a large number of mothers may not come back on or after the 4th day for screening. Therefore, to keep the program effective we decided to use the special reference values for T4 TSH and draw the samples just before discharge at the time of the neonatal vaccination.
In this study three of the five patients with a suspect hypothyroid profile were lost to follow up. This is a big problem in most screening programs requiring effective follow up arrangements and parental awareness of the importance of the thyroid screening program.
Babies on antibiotics or in stressful conditions such as an illness quite often have a false positive profile as was apparent in the Low TSH -Low T4 group. This has been seen often in babies who require prolonged hospitalizalion on account of illness or prematurity. It is recommended that these babies have an initial screening done at birth and then repeated 4 days after discharge or on coming off antibiotics.
To assess the magnitude of the problem and for early intervention nation wide, multi-centre screening programs are essential.