Objective: In 1998, road traffic injuries were estimated to be the 9th leading cause of loss of healthy life globally and are projected to become the 3rd leading cause by 2020, The majority of this burden can be located in the developing world where most of the projected Increase will occur. Yet health systems are least prepared to meet this challenge In these countries. At the same time, there are effective Interventions for road traffic Injuries being implemented in the developed world, An extensive review of the literature reveals more than 16 dIfferent interventions in four categories that have been Implemented. Renewed testing of these and new interventions will take both time and funds - resources that are scarce in developing countiles, As a result, it is imperative to study the effectiveness of those Interventions already tested and attempt to evaluate their potential implementation In developing countries.
Method: Literature review to Identify effective interventions end the magnitude of the effects.
Results: Four broad classes of interventions can be identified from the literature; health education/awareness, legislation, product design and environmental modifications.
Concluslon:The issues for the developing countries are affordable, infrastructure and sociocultural in implementation of these strategies. The road traffic injuries are also underreported and hence under represented at the priority setting stage, Road safety should be high on the agenda as it can save a lot of lives and disability. Public health professionals should assess and advocate road safety in developing countries (JPMA 52:69,2002).

The World Health Organization estimates that by the year 2020, the years of healthy life lost worldwide will be equal for Infectious diseases and for injuries. It is projected that motor vehicle crashes will become number 3 in rank order of disease burden (measured in DALYs) in year 2020 as compared to their present ranking at number 91. Despite such statistics, little attention has been paid to the prevention of road traffic injuries in the developing world, This situation is further hampered by limitations of knowledge, absence of reliable estimates of the current level injuries and traditionally restrictive views on health and disease. This Situation also exists because research, for the reduction of traffic injuries is funded at a disproportionately lower level than all other health issues. In addition, governments have not viewed the problem of road traffic injuries aS a public health problem, but as a transport and police issue. The absence of good economic and effectiveness data in developing countries remains an important further hurdle in formulation of evidence-based public policy in the field of injury prevention.
There are interventions for road traffic injury prevention which are being practiced in developed countries and which have been found to be effective2-6. Considerable time and funds would be required to test each of these interventions in developing countries. As a result, many developing nations may wish to identify and adopt those interventions that have been deemed effective in the developed world. In this setting the question of how effective technologies can be transferred from developed to developing countries becomes very relevant.
The objectives of this paper are to review the available literature to identify effective road traffic injury control interventions, in the developed world and collect similar evidence from the developing world (if available). The intent is to explore which interventions are effective, and potentially practical for implementation in the developing world.

A systematic review of electronic data base searches was conducted for the period 1979-1999 for road traffic injury. Search terms were used to cover each intervention suspected of having been tested for effectiveness that has an impact on road traffic injuries. A search for the three main developing regions of Asia, Africa and Latin America, and a few specific countries (2 from each region) for a cross check.
Any paper that pertained to an intervention with the potential of preventing or controlling road traffic injuries was accepted for review. Each paper was reviewed by a research assistant followed by a faculty member, for pertinent effectiveness information. A database was compiled and analyzed on spreadsheets and related database software. The studies used different measures of effectiveness, different methods and often took place in different countries with variable badkground conditions: all of these details were tracked. In addition, since the exact effectiveness percentage varied, the highest measured effectiveness level has been quoted below as the maximum potential for that intervention (reduction up to x%).

Sixteen interventions were selected for review and each intervention was found to be evaluated by a number of different investigators. Analysis of these interventions shows that they can be grouped into 4 types - based on the primary change they bring - which have been tested and implemented in different developed countries (Table 1). 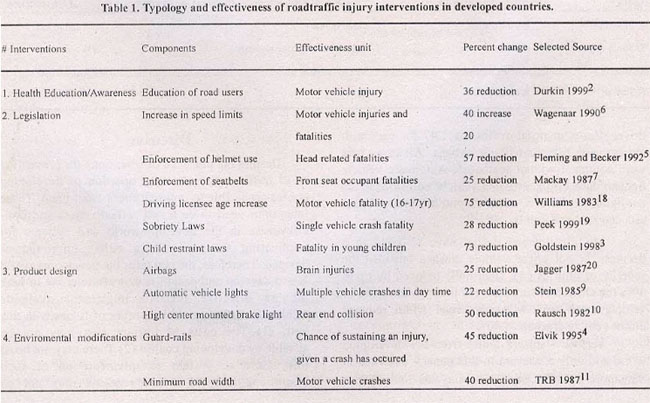 Health education, an intervention in itself and also a crucial component of many other injury and public health interventions, has been shown to be effective for increasing awareness on injury control. Education of children below the age of seventeen years resulted in 36% reduction in traffic injuries compared to pre-intervention period2.
Legislation has played a very significant role in the reduction of not only motor vehicle crashes and injuries but also the severity ol’ injuries (Table 1). The most effective legislation has been mandating seatbelts, child restraints and helmets. Front-seat car occupant casualties declined by 25% due to seatbelts in comparison to the year before the enforcement of law to the year after the enforcement of law7. Child restraint laws reduced fatalities in young children (0-4 years age) up to 73% (from 8.1 per 100,000 to 2.2 per 100,000 after the enactment of law)3. Helmet use reduced fatal head injuries from motorbikes by up to 55% (fatalities per 1000 registered motorcycles)5.
Improved motor vehicle design has also played a crucial role in reducing motor vehicle crash injuries. Airbags have been shown to reduce automobile fatalities in the front-seat especially brain and thoracic injuries. It has been shown that ratio of driver deaths in frontal crashes to driver deaths in non-frontal crashes is 1.47 for cars with airbags and 2,03 for cars without airbags. All these cars were equipped with manual seatbelts8. Automatic vehicle lights reduced frontal and crossing vehicle’ collisions in the daylight by 22%9. High center-mounted brake lights reduced rear end collisions by 50%10.
Modifications in road design have also led to a decrease in not only motor vehicle crashes but also the severity of injuries (Table 1). Guardrails reduced by up to 40% the chance of sustaining a severe injury when a motor vehicle crash occurred4. Minimum road width reduced motor vehicle crashes by up to 40%11.
Very few studies were found from the developing world and only 5 were relevant to this paper - one each in Singapore’, Taiwan, Hungary, Indonesia, and South Africa
(Table 2).

In Hungary the study showed a 13% reduction in the number of frontal and crossing vehicle collisions in the daylight, during the period while there was a partial obligation for using daytime running lights12. In Yogyakarta, Indonesia, the study revealed 32% head injuries in helmet users, compared to 52% in non-helmet users. The relative risk of injury among those who were not wearing helmets was 1.713. In Johannesburg, South Africa there was a significant decrease in the number of motor vehicle crash patients after one year, who were admitted to a city hospital after speed limit enforcement. It dropped from 48 in 1972 to 20 in 1973 (34.4 -61.5 at 95% C!)14. In the Singapore study, there was a 52% reduction in serious injuries and 66% in minor injuries over a nine years period (1980-89) attributed to road safety education programs for school children. The rates in 1980 were 95 per 100,000 child pedestrians (slightly injured) and 18 per 100,000 (seriously injured) respectively. In 1989 the corresponding values were 45 and 6 per 100,000.15 And finally in Taiwan, it was observed that there were 6,240 Quality Adjusted Life Years (QALYs) gained due to enforcement of helmet laws because of reduction in head injuries due to motor cycle crashes16 (Table 2).

Despite the presence of interventions for prevention of road traffic injuries, a large proportion of developing countries are unable to optimally benefit from them. These interventions need to be tested for effectiveness and cost-effectiveness in the developing world and systems for implementing them need to be either improved or developed. Therefore, the real task for the developing world is not to develop and design new interventions but to look for more effective means to implement available technologies. There would be a number of issues with this option; (1) The costs of implementation may not be affordable by developing countries; (2) There may not be an infrastructure or system for implementation of such interventions and (3) The interventions may not be perceived as beneficial by society due to a wide variety of socio-cultural and other constraints, such as firm belief that the injuries are act of God and nothing can be done. All of these issues will require study as part of the implementation process in a developing country setting.
Available motor vehicle crash data from developing regions is usually limited and has not been traditionally used by health professionals to promote action to ensure safety. Decision makers in these countries can be misled into underestimating the problem, and an analysis of the processes of motor vehicle crash causation in each country is necessary for the selection and design of counter measures and initiation of new approaches for accident prevention. As a result decision-makers in general and especially in the health sector often give low priority to road safety. l)ata of good quality, proper analysis, and a coherent assessment of the social and economic costs of motor vehicle crashes are essential for the promotion of road safety at all levels of decision making17.
Enforcement of traffic rules and regulations in many developing countries has remained a limitation to existing road trallic safety laws. Shortages of personnel in the traffic police forces, lack of adequate training, lack of the necessary required equipment (such as vehicles and radios) and poor performance of traffic courts are some of the reasons for inefficient enforcement17(Personal Communication, DIG, Punjab 1997). In addition, informal and unrecorded transfers of money at the site of traffic violations are unmeasured phenomena that further decrease the effectiveness of any enforcement (Personal Communication, 1999).
Motor vehicle crashes disproportionately affect the most productive age groups in most societies, and yet there are few active groups of citizens who are concerned with road safety and who are trying to promote the issue in developing countries as a whole. There are even fewer road safety lobbies with the power to influence politicians or decision-makers such as vehicle manufactures and car owners.
From an operational perspective it may be easier to think of a set of interventions rather than each singular intervention. If the interventions shown in Tables 3a and 3b,

were to be implemented successfully in a developing country, they may be able to reduce motor vehicle crash injuries by 50-83%, depending on the specific causes in that country18. As a result, governments, donors, as well as civil society organizations should take the challenge of controlling road traffic injuries by successfully implementing available technology.
However, we would like to emphasize that we are recommending this package only, because nothing indigenous is avai!able at present, in the developing countries. This makes more of a reason to allocate more ftinds for control of injury and road safety in developing countries. In North America and other developing world majority who are affected by motor vehicle crashes are drivers of cars19. So seatbelts and airbags are good protective gears. In contrast in developing countries majority who are affected are vehicle occupants and that also of commercial vehicles. The other main group affected is pedestrians; so obviously, developing countries need interventions, which are effective in their own conditions. But as public health professionals it is our duty to act withA whatever is available and affordable, till we find an appropriate technology, which is equally effective in developing country settings.