A one year and seven month old child presented with complaints of abdominal pain, vomiting and bloody stools (current jelly) for 15 hours. On examination he was irritable and screaming intermittently and pulling his. legs up followed by being pale and limp. A firm, mobile mass was palpable in mid abdomen. On rectal examination there was blood and mucous on the glove. The laboratory investigations were normal. Plain x-ray of the abdomen showed multiple dilated loops of bowel with air fluids levels on erect film suggesting an obstructive pattern; however no mass was seen. A single contrast barium enema was performed which showed a typical “claw hand” filling defect in the middle of transverse colon suggesting intussusception (Figure). 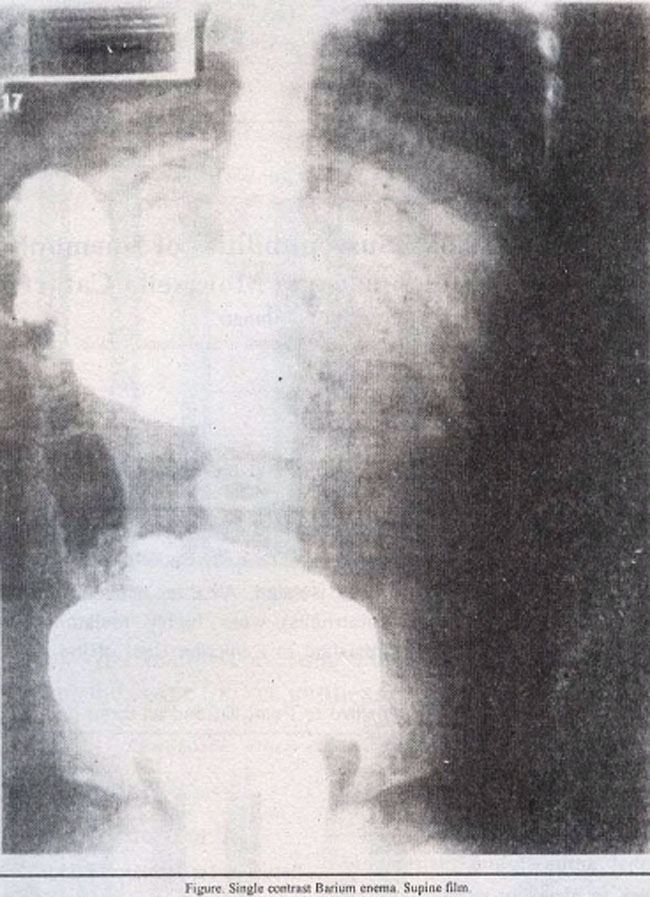 This was successfully reduced by applying pressure with barium column with free flow of contrast into the terminal ileum.
Diagnosis:Mid-colic Intussusception

Intussusception is defined as the invagination of one bowel segment into another (telescoping into a distal segment)1. This leads to obstruction of venous and lymphatic flow. If the obstruction is not reduced, there will be mesenteric artery obstruction.
Intussusception commonly presents between 5-9 months of age. It is twice as frequent in males than females; 90% cases are idiopathic, 10% involve a discrete lead point. Common lead points include Meckels diverticulum, intestinal polyps, appendicitis, neoplastic lesions and foreign bodies. Lymphoid hyperplasia is found in idiopathic cases. Eighty percent of intussusceptions are iliocolic. Commonest mode of presentation is intermittent abdominal pain manifested in an infant by drawing knees to chest with crying followed by pain free periods. Vomiting, stools mixed with blood and mucous (current jelly stool), shock and fever are associated features.
Plain film, of abdomen may show a mass anywhere in the abdomen with an obstructive pattern, or it may be normal. Ultrasound of the abdomen is often the first test of choice2. Sensitivity is almost 100%1. A positive test will demonstrate a doughnut or onionskin pattern. Barium enema has both diagnostic as well as therapeutic potentials2. Diagnosis is made on finding typical claw hand or spring coiled appearance in the head of barium column. Reduction of Intussusception is perfbrmed by applying pressure with barium column, which is effective in 80% of cases in hands of experienced radiologists3. There is 10% recurrence rate. Parents are explained of symptoms to watch for and if there is recurrence, barium enema may be tried again. After multiple recurrences, surgery may be done to find a specific lead point or resect some portion of bowel. Operative reduction is needed if barium reduction fails or there is contraindication to barium enema. Contraindications include perforation of bowel, peritonitis and prolonged obstruction. Complications include perforation with infection.