Objective:To determine the prevalence of HIV, Hepatitis B (HBV) and Hepatitis C (HCV) amongst the health workers of Civil Hospital Karachi (CHK).
Material and Methods:Prospective study. A precoded Proforma was filled out which included questions regarding the knowledge, attitude and practices (KAP) of HIV, HBV and HCV.
Setting:Departments of a tertiary health care facility at CHK. Antibodies to HIV, HCV and Hepatitis B surface antigen (HBsAg) were done using enzymes linked immunabsorbant assay [ELISA].
Results: Uptake of screening was 98% to those offered. The prevalence was 5-6% for antibodies to HCV, 2.4% for HBsAg, while none of those studied had antibodies to HIV.
Conclusion:Our results show the prevalence of antibodies to HCV in health workers are 20 folds higher than health workers in the developed countries, Similarly, the prevalence of HBV although not as high as HCV is significant. Seroprevalence of HIV does not exist in this group. We need to ensure better training; regulations regarding preventive and safety measures also need to be enforced (JPMA 52:92; 2002).

Globally about 13,000 new infections of HIV occur each day1. HIV is lethal and at present is an incurable disease having remarkable social repercussions2. HBV and HCV are also major health problems in developing countries3. Previous studies in general population of Pakistan have shown a seroprevalence of HIV to be 0.23%4. Seroprevalence of HCV is 14%5. A study done in health care workers found the seroprevalence of HBV to be 3.7%6 while prevalence of HCV is 4%7. Data regarding prevalence of HIV in Pakistan for health care workers is not available. In developing countries due to limited health care and absence of an effective vaccine (for HIV, HCV), there is unhindered spread of all viruses. All the modes of transmission, viz., homosexuals, heterosexual contact, blood transfusion, intravenous drug user, from mother to child are all prevalent in Pakistan. In view of all this, such a study was required to get an exact prevalence in a certain group, exposed to infection as a part of their normal routine work. Health care personnel of Civil Hospital Karachi (CHK)IDow Medical College was a group that fulfilled the criteria and was easily accessible.

The study design was cross sectional, conducted in the setting of CHK in collaboration with Sindh Services Hospital, Karachi. The subjects included were health care workers in close contact with patients for at least 3 years. Also included were hospital workers not in direct contact with patients, but had handled objects that had been in contact with patients. Whereas those who were working as a clerk or chowkidar and those with a history of multiple sex partners and illicit drug users including intravenous drug abusers, were excluded from the study.
After biostatical analysis a sample size of 250 was calculated from the total population of heath workers in Civil Hospital Karachi. Blood samples from the subjects were taken after written consent. These blood samples were sent to the Sindh Services Hospital laboratory within half to one hour. Samples were centrifuged and serum was processed at -20°C, followed by analysis. The HIV Antibody tests were performed in Enzygnost.
Anti HIV V2 plus (by Behrung Morbcrg Cmb H, Germany, on ELSA multiscan reader) was done according to WHO testing criteria. The HBsAg tests were performed on Hbs Ag EJA Las System, Finland on Multiscan ELISA reader. The HCV antibody tests were performed using 3rd generation ELISA technique.
Also, in this study the knowledge attitude and practice (KAP) of the subjects were assessed. They were asked about risks of transmission of HBV, HCV, HIV during hospital job, possible modes of transmission, their exposure to needle stick injury during hospital employment and whether or not they were tested after needle stick injury. The KAP for disease prevention were also assessed of whether or not vaccinated for HBV and number of shots taken by them.
Ethical Approval
This was taken from the head of the Institute (Principal Dow Medical College, Medical Superintendent CHK and Head of each department such as surgery, medicine, anesthesia, pediatrics etc.) Also written consent was taken from the health workers before sampling. All investigations done and information obtained from the health workers in the KAP proforma was strictly confidential. 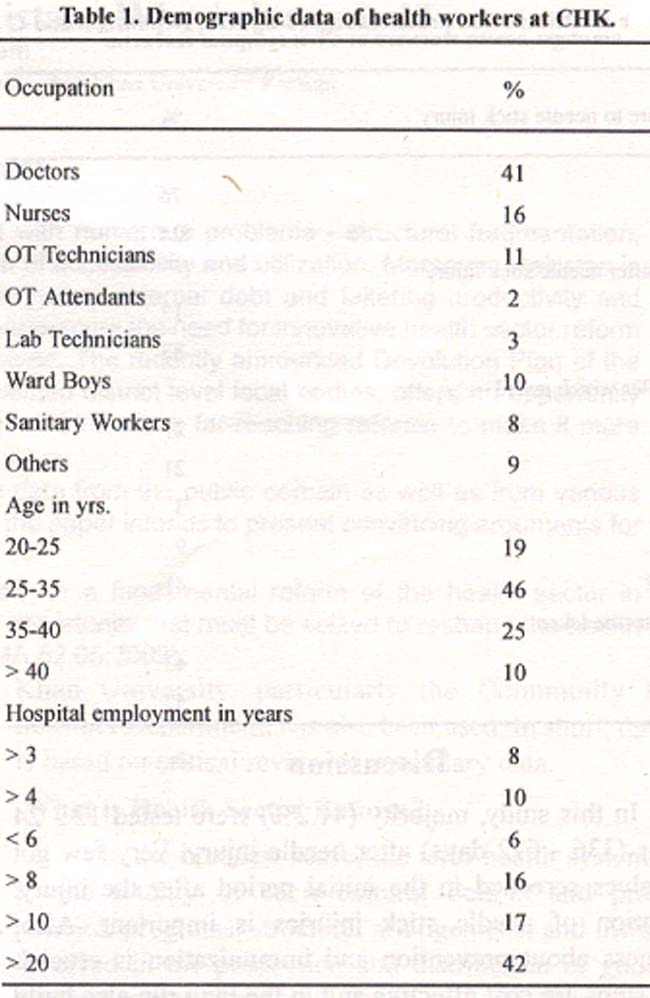 Regarding KAP most of them had enough knowledge of possible risks and modes of disease transmission. However KAP of disease prevention was lacking (Table 2). 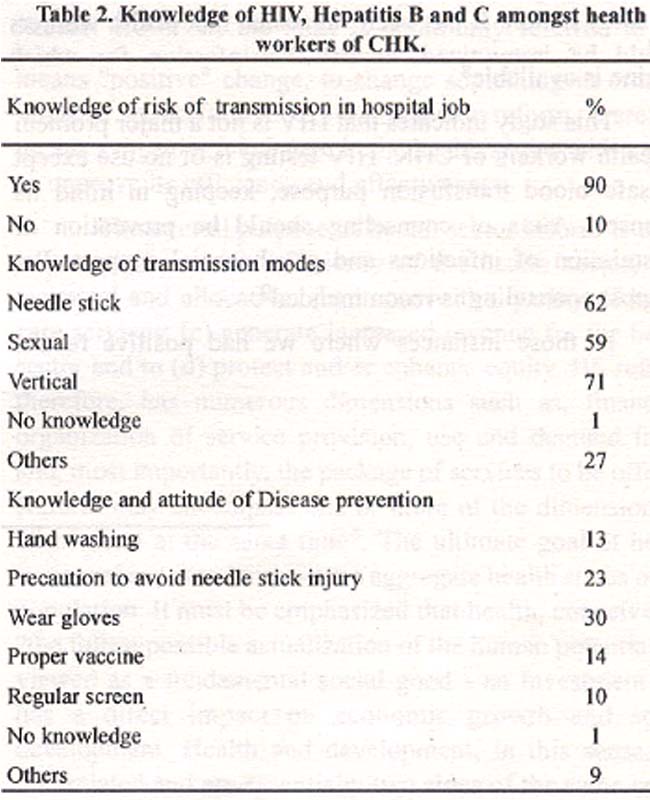 About quarter of them had needle stick injury during hospital job but few were tested against it. Less than half of them were previously vaccinated for HBV but majority of them knew about the risk of transmission of HBV, HCV and I-IIV during hospital job (Table 3). 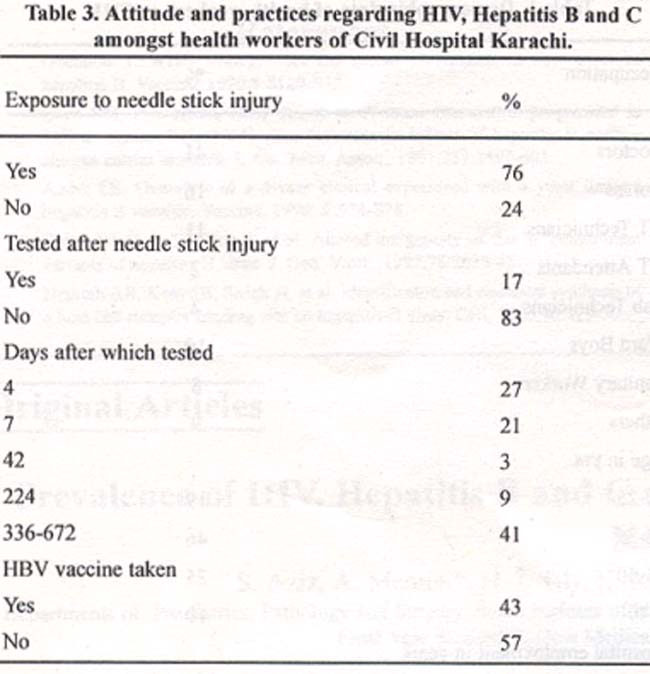 Of the 2.4% positive for HBsAg, all were not vaccinated, for HBV except one who had the first dose of the vaccine and not the remaining two as recommended.

In this study, majority (41.2%) were tested 12 - 24 months (336 - 672 days) after needle injury. Very few got themselves screened in the initial period after the injury. Prevention of needle stick injuries is important. Also, awareness about prevention and immunization is crucial. These steps are cost effective and in the long run also build a healthy nation. It has been suggested that health workers should be immunized against the infection for which vaccine is available8.
This study indicates that HIV is not a major problem in health workers of CHK. HIV testing is of no use except for safe blood transfusion purpose, keeping in mind its expenses. Aims of counseling should be prevention of transmission of infections and psychosocial support. Pre and post counseling is recommended9.
In those instances where we had positive results strict confidentiality was maintained and they were further referred for management and psychosocial support. Even those who were found to be negative were informed about causative factors and risk behavior.
In our total study population (250) 5.6% were positive for HCV, 2.4% for HBV and none for HIV. None of the health workers were found to be positive for both HCV and HBV. It is concluded that HBV and HCV seroprevalence in health care workers is similar to those documented in previous studies whereas HIV is not a major problem. The KAP of health care workers need to be changed by education and proper training.

We thank the head of each department for their co­operation. We are grateful to the health staff who participated in this study. We thank the principal Prof. Illahi Buksh Soomro, Medical Superintendent of Civil Hospital Karachi, for allowing us to conduct this study after approval of the ethical committee of the Institute. We are obliged to Dr. Ahmer for helping us in the collection of the samples.