Objective:To obtain information about presenting features of women with breast cancer in Pakistan, to compare these data with information on patients with breast cancer in the United States and to highlight the differences.
Methods:Patients referred to the National Cancer Institute, Karachi, Pakistan between January 1, 1994 and February 28, 1999 who had been recently diagnosed with breast cancer were prospectively evaluated. A printed questionnaire was used as an interview guide. Information was obtained about demographic features/ clinical characteristics, stage of the disease and previous therapy.
Results:Five-hundred sixty-six patients were evaluated. Mean age was 47.7 ± 11.8 years. Risk factors for breast cancer were observed in a minority. Mean number of pregnancies was 4.4. Eighteen percent had positive family history mostly in first-degree (64%) relatives. The vast majority (93%) discovered the lump accidentally. Average size was 5.7±2.3 cm. Over half had used unconventional therapies before receiving standard medical care. Most patients had undergone modified radical mastectomy and only 5% had conservative surgery done. Almost one third had locally-advanced disease. Seventeen percent had metastases at the time of diagnosis.
Conclusion:Despite significant advances made in cancer care in the United States, patients in Pakistan still present at an advanced stage. Antecedent use of unconventional therapies before seeking any medical advice is widespread. There is a great need for public education to enhance awareness about cancer and other health habits (JPMA 52:100;2002).

Considerable progress has been made in the fight against cancer. Prevention, early detection and better therapeutic management have resulted in a decline in the incidence of cancer and its related mortality1,2. This is attributable to the tremendous efforts made by the governmental agencies, non-governmental organizations and societies, general public and health professionals, particularly in the technologically advanced countries.
Cancer, however, is a worldwide problem. More than half of all cancer patients live in developing countries where resources to combat this disease are meager3. Budgetary restrictions, general illiteracy, poverty, poor hygienic conditions, environmental pollution, lack of awareness about etiology and pathogenesis of cancer, scarcity of well-equipped oncology institutions, trained health professionals and lack of sustained efforts by the government, general public and societies, have created an extremely dreadful situation. If not already, this problem will reach epidemic proportions. Its impact on global health care resources will be enormous.
Breast cancer is an excellent example of the contrast between the progress made in the developed countries and difficulties associated with cancer care in the developing countries. It is the most common cancer in women worldwide3. Breast cancer is a model for successful strategies that can be employed to fight against cancer, Public education and increased awareness have resulted in early detection of this disease in the United States4, Furthermore, significant therapeutic advances have been made with considerable improvement in disease-free and overall survival4. More recently, prevention of this disease has become a reality5. Mortality rates are declining. Against this very optimistic background, a clinico-pathological study of breast cancer cases observed in Pakistan is presented.

All patients referred to oncology service at the National Cancer Institute, Karachi, Pakistan between January 1,1994 and February 28, 1999 for the management of breast cancer were subjects of this study. Eligibility criteria included histologically confirmed diagnosis of carcinoma of breast made within the last 6 months. Patients were also required to have an ability to understand the study objectives and willingness to provide the required information. Verbal consent was obtained in all cases. Males were excluded. A printed questionnaire was used as a guide and patients were interviewed for an average of 30 minutes. Study objectives were explained to the patients. They were promised complete confidentiality with absolutely no consequences on subsequent medical care.
This institution provides oncology services primarily to middle and upper socio-economic groups. A governeyta1 institute in the city handles most of the indigent patients. Socio-demographic features were assessed on the basis of information obtained from the patient which, when possible, were corroborated with factual information such as monthly salary, etc. Clinico-pathological features and stage of disease were, however, objectively assessed from patients’ medical records.
Epi Info statistical package (Center for Disease Control, Atlanta, Georgia) was used for data analysis.

Five hundred and sixty-six patients were accrued. All were analyzed. Demographic features, menstrual history and reproductive findings are presented in Table 1. 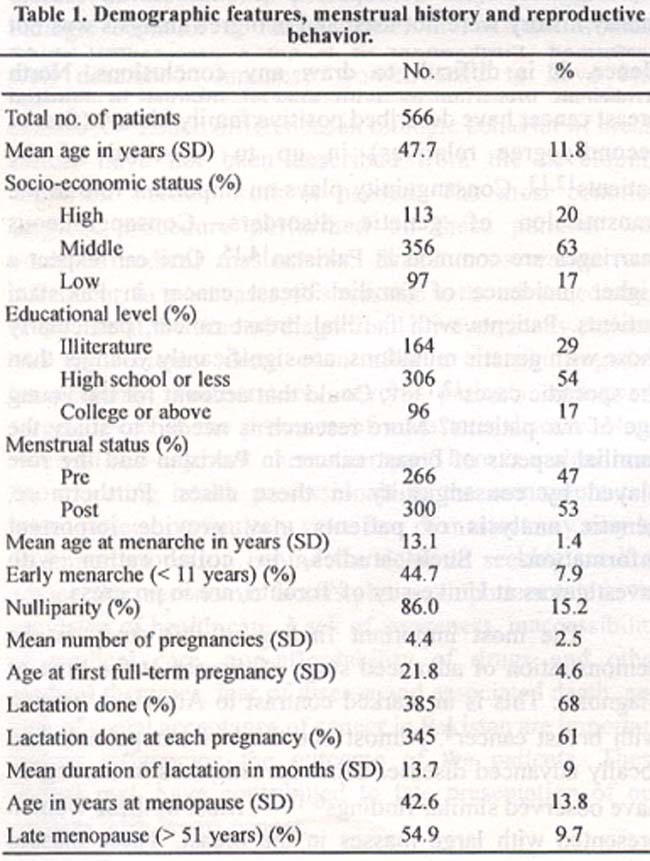 Mean age pf the patients was 47.7 years. Ethnic distribution was Mohajirs 54%, Gujrati Memon 16%, Punjabi 11%, Aga Khani 8%, Sindhi 6%, Pathan 4% and Parsi 1%. Most (94%) were married and belonged to the middle class. Due to the referral bias, there were fewer patients in the lower socio-economic group. Eighty-four percent were homemakers and only 16% were gainfully employed. Twelve percent had history of previous breast disease. Very few (3.7%) were smokers and hardly any (0.7%) consumed alcohol. Eighty patients (14%) had received exogenous steroids- mostly oral contraceptives. Family history was positive in 18% of the patients (Table 2). 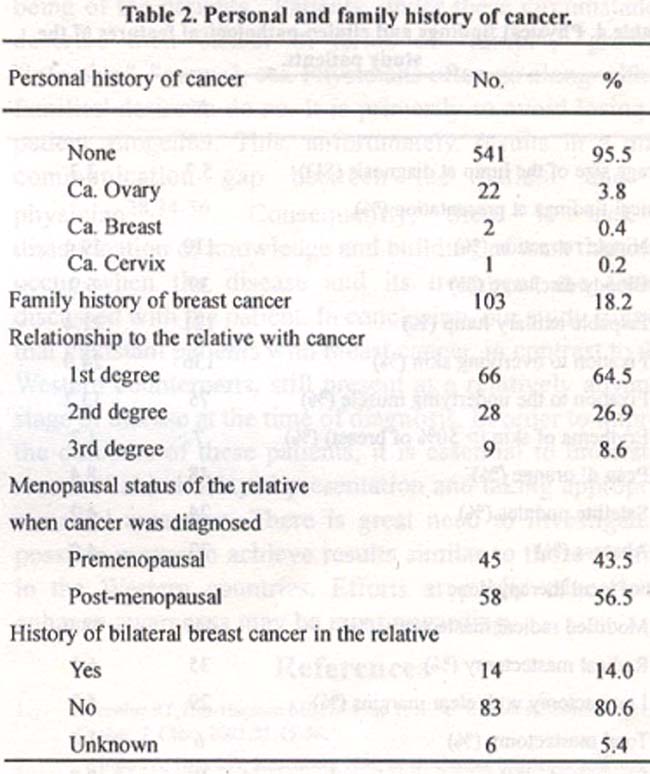 Most of them were first degree relatives. The breast lump was discovered accidentally in the majority of the cases and it was not part of a routine self-examination or use of mammographic screening. More than half used un-conventional therapies before visiting a physician (Table 3). 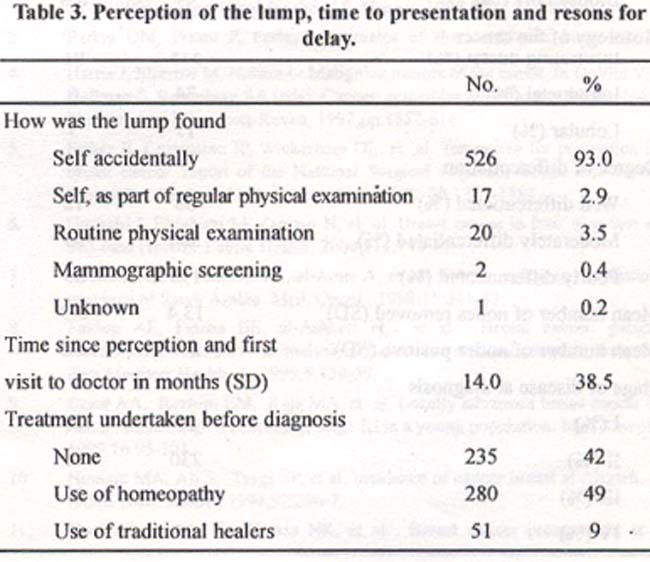 The most common surgical procedure was modified radical mastectomy, which was even done in some cases with documented metastatic disease (7%). In many cases, mastectomy followed a previous lumpectomy with clear margins (11%). Pathological features are provided in Table 4. 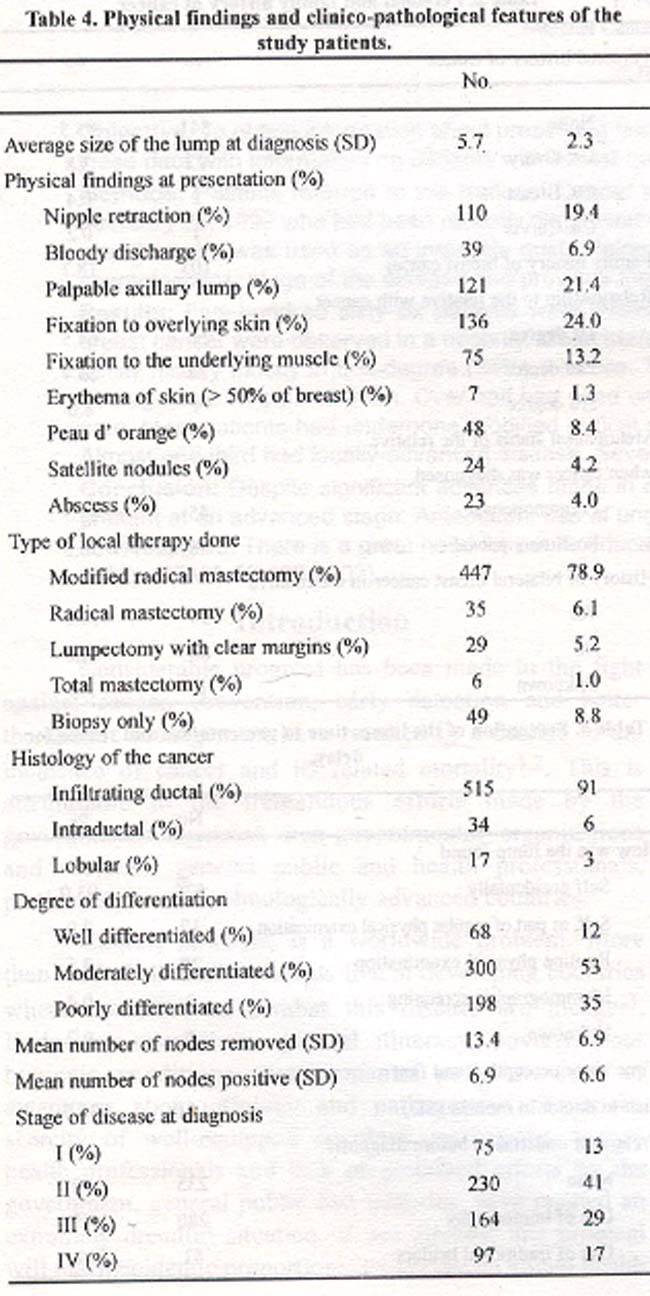 Most were infiltrating ductal carcinomas. Vascular invasion was observed in 41% and lymphatic invasion in 59% cases.
Estrogen receptor status was done on 55% of cases. one percent were ER negative. Very few patients presented with stage I disease. Most had stage II disease. Seventeen percent had metastatic disease time of diagnosis.