Objective:To assess the independent and interdependent prognostic value of epidermal growth factor receptor (EGFR) in carcinoma of breast in female population. The Type I family of growth factor receptors includes epidermal growth factor receptor (EGFR also known as EGFRI).
Methods:The expression of EGFR protein was analysed immunohistochemically on 315 tumour specimens of infiltrating ductal carcinoma of breast. These patients also had axillary lymph nodes sampling.
Results:Overexpression and/or amplification of EGFR was observed in 70 (22.00%) tumours. Eleven (16%) were grade I, 43 (61%) grade II and 16 (23%) grade Ill tumours. Axillary lymph node metastasis had significant correlation with intensified positivity of EGFR (p< 0.05). Significant number of EGFR positive patients developed local recurrence and distant metastases to brain, liver and bone (p< 0.05). EGFR positivity showed significant correlation with the disease free and overall survival (p< 0.05). At a median follow-up of48 (4 years) months in EGFR positive patients, the overall survival was 3.39 years and disease free survival was 2.86 years. EGFR negative tumour patients showed a better survival. In this group the overall survival was 4.62 years and the disease free survival was 4 years.
Conclusion:EGFR analysis can be a useful indicator for the selection of patients who are at the high risk, for hormonal therapy decisions and can be useful as a target for new treatment modalities (JPMA 52:104; 2002).

In an attempt to reliably predict biological behaviour of various malignant tumors including breast cancer, several novel prognostic markers were conceived and rigorously tested in the last two decades. Epidermal growth factor receptor (EGFR) was among the first in this plethora of new prognostic markers.
EGF is a growth-promoting agent found in human milk and high plasma and tissue levels are found at the times of breast development and maturation. EGF stimulates cell proliferation by high affinity binding to a specific EGF receptor. The EGFR is a 170-kDa-membrane protein1 comprising an external domain, a transmembrane domain, and a cytoplasmic domain2. One of the actions of EGFR is to stimulate auto-phosphorylation of the membrane receptor, an action similar to that of the oncogenic viral-coded proteins such as pp6O.
EGFR antibody reacts with the squamous cell carcinoma arising from the squamous epithelium of skin of the cervix and metaplastic squamous areas like lung cancer3-5. EGFR has also been identified in both breast cancer cell lines and primary breast cancer specimens3,6-9. EGFR status has been shown to be an important risk factor for recurrence of breast carcinoma and predictor of both relapse free and overall survival9.
Over-expression of the EGFR is a hallmark of numerous solid tumours, thus providing means of selectively targeting therapeutic agents. The type 1 receptor family comprises the prototype EGFR (also known as EGFR 1) and proteins encoded by C-erbB-2, C-erbB-3, and C-erbB-4 genes. Overexpression of EGFR I and C-erbB-2 proteins has been described in various human carcinomas and generally reported as an adverse prognostic marker10.
This study was done to assess the independent and interdependent prognostic value of EGFR in carcinoma of breast.

A sample of 315 patients with histologically proven diagnosis of invasive ductal carcinomas (IDC) of breast with lymph nodes sampling from January 1992 to December 1997 were included in this study. Based on available information we assumed a difference of 1.5 years in survival time with EGFR positive and EGFR negative patients. The sample size of 315 was expected to detect this difference with a power of at least 90% at 5% level of significance.
Morphological variables like age, grade, carcinoma type, vascular / lymphatic invasion, lymph node status and tumour size were recorded. Other variables like age menopausal status, parity, distant metastasis; treatment protocol and survival details were retrieved from their medical records. Fixation and processing was done by routine method. After processing, the tissues were embedded in paraffin using the Histocenter 2 from Shandon. 5U thick sectioning was done by Microtome AS 325 from Shandon. The same breast tumour paraffin blocks were used to make further sections for immunohistochemistry. The sections were cut and picked on poly-L-Lysine coated slides. Expression of EGFR
protein was evaluated using mouse Anti-Human EGFR protein monoclonal antibody EGFR (DAKO, Denmark) diluted at 1/25, following pre-treatment of sections in a microwave oven (5x3 min. at 630 W) using PAP technique. A breast carcinoma section expressing EGFR was used as a positive control. Same case omitting the primary antibody was used as a negative control with each staining procedure.
The percentage of EGFR positive tumour cells was estimated semi-quantitatively and they were graded on a scale of 0-3 (0%, <10%, 10-50% and >50%) and the intensity of reaction (-, +, ++, +++ or ++++)12. To minimise the subjectivity, slides were scored on a double-headed microscope (Olympus BX5O) separately by two senior histopathologists. Immunostaining was repeated on equivocal cases and consensus was achieved between the two pathologists in all cases.
Statistical analysis
Our main interest was to estimate the survival time for breast cancer patients and look into the relationship between survival time and their prognostic variables.
The Kaplan Meier estimator is an important tool for analysing censored data. The Survival curves, the mean (Standard error for mean), median Survival time (Standard error for median) along with the 25th and 75th percentiles were estimated for each prognostic variable using this method.
Univariate analysis was done to examine the relationship of each prognostic factor with the survival time using the Cox proportional hazard model or Log rank test. For qualitative variables, if more than two categories existed, then dummy variables were introduced. Hazard ratios along with 95% CI were used to describe the relationship between each prognostic variable and the outcome variable.
Multivariate analysis was done to identify a subset of prognostic variables that relate significantly to the hazard, and consequently the survival of the patient. The model fitting was aimed to fit the most parsimonious model, which was biologically able to explain the. data. The multivariate analysis also helped us to control for the confounding and study effect modification. An adjusted hazard ratio along with 95% CI was used to describe the relationship between the set of prognostic variables and the outcome variable.

Table 1 provides the descriptive statistics about the sample. Analysis was done on a total number of 315 observations, with 36.2% survivals till the end of this study, i.e. May 1999. 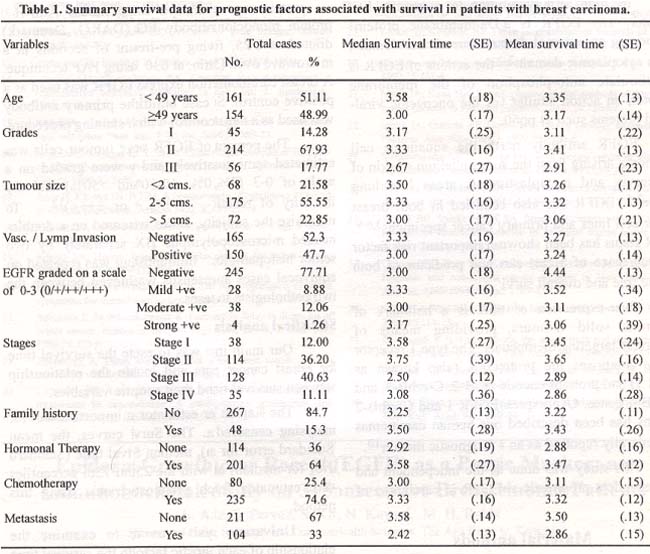 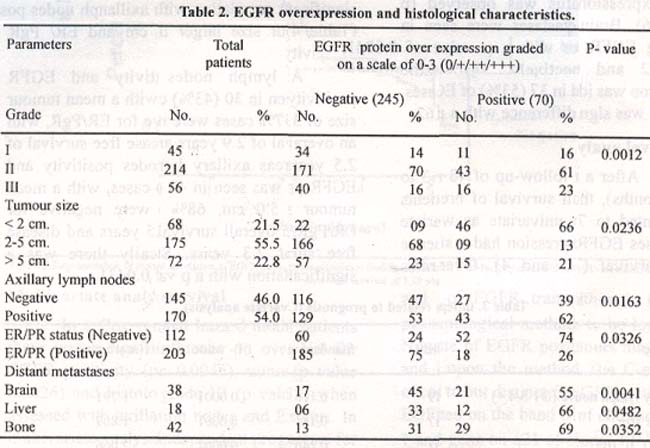 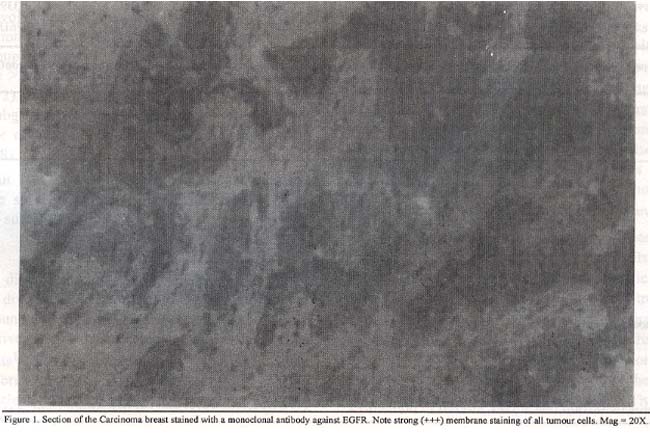 The difference in EGFR expression between patients aged <49 years and >49 years was not statistically significant (p= value 0.4368).
By univareate analysis EGFR overexpression was significantly correlated with histological differentiation, (p 0.0012), tumour size (p 0.0236), and axillary lymph nodes metastases (p 0.0163). Out of 70 EGFR positive only 18 (26%) cases showed ER or ER/PR positivity, therefore a significant but inverse relationship between EGFR overexpression and hormonal status was observed (p 0.0326). Brain, liver and bone metastases were seen in strong EGFR positive cases with a p value of 0.0041, 0.0482 and 0.0352 respectively. Vascular/lymphatic invasion was identified in 37 (53%) of EGFR positive cases. There was significant difference with a p value of 0.0162.
Survival analysis
After a median follow-up of 48 months (range 3 to 73 months), the overall survival of breast cancer patients amounted to 75%. In univariate as well as multivariate analyses EGFR overexpression had a significant influence on survival (Tables 3 and 4). 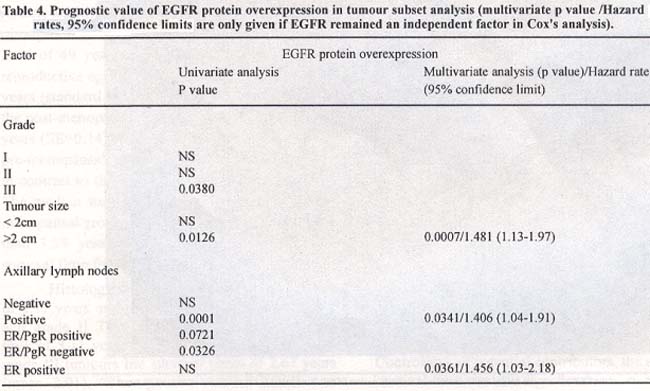 Overall survival rates amounted to 78% and 43% in patients with negative and positive EGFR protein overexpression in tumours (Figure 2). 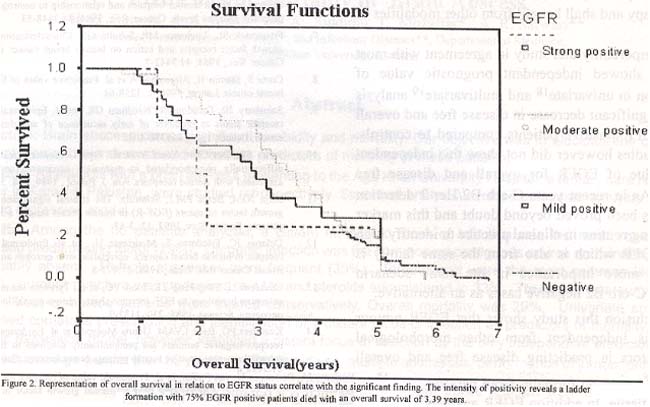 The distribution of EGFR (EGFR 1) in breast cancers has diversely been reported in the literature. In our study we found that 22% (n=70/3 15) of the tumours were EGFR positive. Based on 40 separate studies comprising 5232 patients11, the mean percentage of EGFR positivity reported in breast cancer is 45% (range 14-91%). Overall, there is no clear difference in results between radioligand binding assays, immunological methods, autoradiography, and measurement of EGFR transcripts although EGFR positivity by immunological methods tends to be lower12. Nonetheless, the rate of EGFR positive tumours may vary and likely depend upon the method used. The C-erbB-2 oncogene is related to but distinct from the EGFR gene. The EGFR gene is located on the band p1 i-p 13 of chromosome 7 and the C-erbB-2 gene on q21 of chromosome 1713.
In our study significant correlation was found with histological grade III and EGFR positivity. Several other reports also showed significant correlation with grade I and III14. No relationship was found between the tumour EGFR immuno-reactivity and the patient’s age, in agreement with a previous report15. We did observe like others,16 significant correlation between the tumour EGFR immuno-reactivity and the tumour size. In our study there was also a significant correlation between positive lymph nodes and positive EGFR (Table 2), this is in consensus with most studies but in contrast to some other studies reported previously17.
Estrogens are involved in the release of growth factors and may mediate the tumour cells response to growth factors such as EGF. A significantly higher proportion of EGFR positive tumours are estrogen receptor negative and fails to respond to endocrine therapy as evident by the significant poor overall and disease free survival. In this study we did find significant correlation with EGFR positivity and hormonal negativity, most of the other studies have demonstrated the same6,11,14. Therefore, the evaluation of tumour EGFR and hormonal status enables us to identify groups of patients who may not respond to hormonal therapy and shall benefit from other modalities of treatment.
Most importantly this study in agreement with most other studies showed independent prognostic value of EGFR detection in univariate18 and multivariat19 analysis as there was significant decrease in disease free and overall survival in EGFR positive patients compared to controls. Some other studies however did not show this independent prognostic value of EGFR for overall and disease free survival20,21. As in recent years C-erb B2/Her 2 detection importance has been proved beyond doubt and this marker is now becoming routine in clinical practice to identify high risk group, EGFR which is also from the same family is gaining even more importance in the same scenario particularly in C-erb B2 negative cases as an altemative.
In conclusion this study shows that EGFR tumour cell content is independent from other morphological prognostic factors in predicting disease free and overall survival, can easily be detected by immunohistochemistry which is a reliable method even on formalin fixed paraffin embedded breast tumour tissue. In addition EGFR analysis can be a useful indicator for the selection of patients for hormonal therapy and can be useful as a target for new treatment modalities particularly in C-erb B2 negative patients.