Low grade B-cell lymphomas of mucosa associated lymphoid tissue (MALT) is a recently recognized distinct morphological and clinical subtype of low grade B-cell lymphoma. Initially studied extensively in the gastrointestinal tract, now it is increasingly being recognized in many non-mucosal locations such as thyroid, salivary glands, thymus, breast, prostate and kidney. Although normal thyroid tissue is devoid of lymphocytic tissue but maltomas may arise as a result of a chronic inflammatory or an autoimmune process. Here we present a case of Maltoma of thyroid which has not been previously reported in Pakistan.

A 55 years old lady presented in the outpatient clinic with one year history of rapidly growing swelling in front the neck. She also complained of fatigue, low-grade fever and body aches. No history of pressure symptoms or weight loss was present. There was no significant family history. Clinical examination revealed a diffuse smooth swelling involving whole of the right lobe of the thyroid. It was tirm in consistency. There was no reterostemal extension. No cervical lymphadenopathy was noted. No signs of hypo. or hyperthyroidism were present.
Laboratory investigations revealed an ESR of 75 mm/hr. Thyroid hormonal assay was normal. Thyroid scintigraphy showed a cold nodule in the right lobe of thyroid. On fine needle aspiration cytology, predominantly lymphoid cells showing different stages of maturation along with imniunoblasts were seen. Also no thyroid tissue was identified, the impression was that of a reactive lymph nature of the swelling a right thyroid lobectomy with is themusectomy was carried out. The patient had an uneventful post-operative recovery and was discharged from hospital.
Gross examination of the resected right lobe revealed a greyish brown nodular mass measuring 8x3x3 cms which was partially encapsulated. On sectioning, the cut surface was greyish and homogenous throughout. Histopathological examination showed effaced architecture of the thyroid and its replacement by sheets of neoplastic cells. The tumor cells were composed of small lymphoid cells with round to reniform nuclei. Many of the cells exhibited plasmacytoid differentiation. Interspersed thyroid follicles of variable sizes and shapes were seen lined by flattened to cuboidal epithelium and filled with colloid in the lumen. The tumor cells were invading the follicular cells giving an appearance of a lymphoepithelial lesion (Figure). 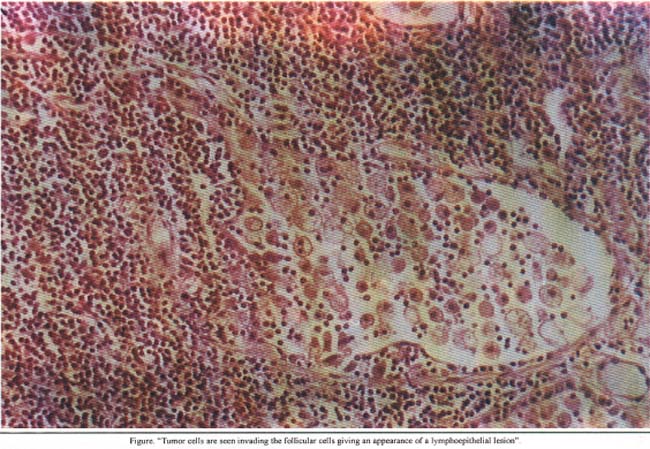 Mucosa associated lymphoid tissue is designed to protect the sites of potential antigen penetration like gut mucosa and respiratory epithelium. It is responsible for eliciting localized immune response because systemic immune response is associated with highly inflammatory reactions that would be deleterious to the fragile mucosa of the gut or the respiratory epithelium. Another important aspect of this system is that the immune response generated at one site can be extended to other mucosal surfaces. Sensitized T and B-lymphocytes are transported through the efferent lymphatics to all the mucosal surfaces of the body.
Non-Hodgkins lymphoma (NHL) may involve the thyroid gland as part of systemic lymphoma or may arise primarily in the thyroid. The most common histological sub type is diffuse large cell lymphoma. About 3% ofNHLs are thyroid lymphomas. The incidence of malignant lymphoma in thyroid is 4%1 Women are affected more often than men. The ratio of female:male ranges between 4-8:12. The peak incidence is usually in 7th decade. Patients usually present with fast growing mass in the thyroid area of the neck. In approximately 30% of the patients there is history of pressure symptoms, which was absent in our patient.
Primary malignant lymphomas of the thyroid usually arise in an immunologically abnormal gland, usually one affected by 1-lashimotos thyroiditis, however, rarely it may arise in a normal gland. In our patient the lymphoma was localized and a CT scan of head and neck, chest, abdomen and pelvis revealed no lymphadenopathy. Thyroid antibodies against microsomes and ‘thyroglobulin were not present ruling out Hashimotos thyroiditis. An association between Hepatitis C and the development of extra nodal maltoma has been observed3 and in hepatitis C positive patients interferon can give a dramatic response. Our patient was hepatitis C antibody negative. The Incidence of second neoplasm in patients with maltoma has been studied and there is no significant increased in the rate of cancers4.
Histologically Maltomas arise from the marginal zone of the lymphoid follicles. There is dense, uniform infiltrate of small centrocyte like lymphocytes. These cells focally invade and destroy the glandular epithelium forming lymphoepithelial lesions5. The lymphoepithelial lesions are characteristic but not pathognomic for Maltomas. In our patient the histology was consistent with that of Maltoma.
Maltomas are slow growing lymphomas. Most patients remain asymptomatic because the disease remains localized for a long period of time. Usually the diagnosis is confirmed only after histopathology and immunohistochemistry. Surgery is usually undertaken for pressure symptoms or when the diagnosis is in doubt as was the case in our patient where fine needle aspiration cytologty was not conclusive. The usual treatment is radiotherapy for localized disease and chemotherapy for disseminated disease and recurrence can be treated with either radiotherapy or a combination of radiotherapy and chemotherapy.
Maltomas can recur at any other mucosal surface and a case of conjunctival maltoma has been reported to recur in psoas muscle6. Hence long term follow up of such patients is necessary.