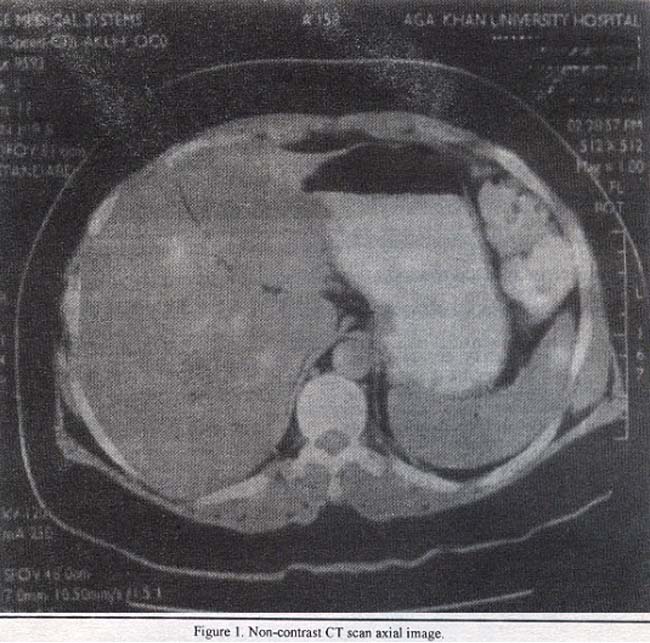 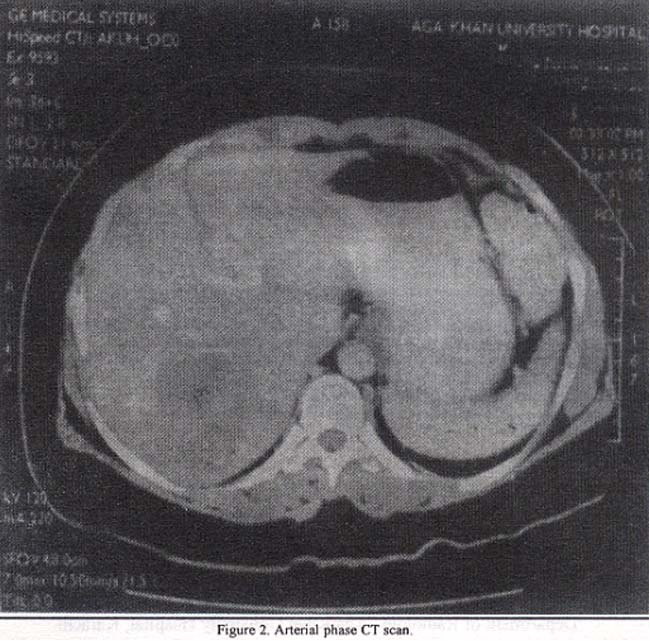 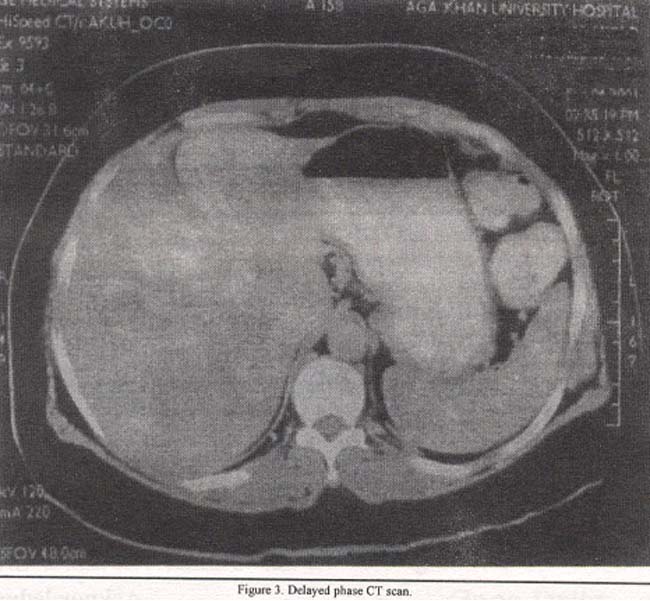 The lesion was heterogeneous with areas that were hypo, iso and hyper dense to the normal liver parenchyma.
Diagnosis:Hepatic hemangioma

Hemangiomas are most common benign tumors of liver, noted in up to 7% of patients on autopsy series1. Upto 20% are multiple. Histology demonstrates over growth of enlarged endothelial lined vascular spaces. While almost always asymptomatic, these tumors can be associated with abdominal pain, fullness and belching. Complications are rare and include bleeding, infarction, necrosis and thrombocytopenia. The clinical importance of these incidentally discovered tumors lies in distinguishing them from primary hepatic malignancies. The classic finding of hemangiomas on U/S is that of a well-defined, echogenic mass. This is seen in approximately 50-60% of hemangiomas2. However this appearance can also be seen in adenomas, hepatocel lular carcinomas and metastatic disease. Unchanged finding on serial ultrasound examinations appear to suggest that the lesion is benign. On un-enhanced computed tomography, hemangiornas appear as a round, low attenuation lesion with slight lobulations on the non-contrast images. Following contrast injection, peripheral puddling of contrast (of an attenuation matching aorta) is seen. The classic findings are demonstrated in only 55%3, Classic finding of hemangioma on Tc-99m labeled RBC SPECT is a lesion that is undetectable or demonstrates decreased intensity compared to liver on the flow images and increased intensity to the liver on the 30-60 minutes images. These finding are 100% specific for hemangiomas1. In literature, there have been only 8 reported false positive cases of hemangiomas3. On Magnetic Resonance Imaging hemangioma appears as homogeneous, well-defined lesion with slight lobulations with low and high signal relative to liver on TI and T2 weighted images respectively. It demonstrates peripheral puddling of contrast on the contrast enhanced images. The differential diagnosis includes metastasis, sarcomas, endocrine tumors and cystadenocarcinomas. One useful distinguishing feature between hemangiomas and malignancies both of which show increase signal on conventional T2 weighted images, is the more increase in the signal intensity of hemangiorna as the time to echo (TE) is increased which glows like a bulb. Signal intensity for malignancy tends to decrease with increase in TE.