Objective: To introduce a simple, self-retentive and cost effective presurgical infant orthopaedic plate with anterior ring to retract and align the grossly protruded and deviated pre-maxilla and to perform the nasoalveolar moulding in order to facilitate initial lip repair.
Method: The study was conducted in the orthodontic department of dental section of CH & ICH Lahore. The nonprobable purposive sample consisted of 35 subjects (27 males, 8 females) with a median age of 7 days (1-13 days). Nonsyndromic patients with bilateral complete cleft lip and palate were included in the study, patients were treated with custom made orthopaedic plate with an acrylic ring around the protruded premaxilla for around 3 months. Anthropometric readings and cast impressions were used to calculate the pre and post treatment differences, the data was tabulated and analysed using SPSS v 12.
Results: The results showed highly significant (<.005) difference between the pre and post treatment records of variables except the intercanine distance where the results are significant i.e. (< 0.05).
Conclusion: The orthopaedic plate causes significant retraction of the premaxillary segment without applying extra oral forces. It produces columellar elongation and increase in prolabium length facilitating the primary cheiloplasty and rhinoplasty to be precise and without additional scarring (JPMA 60:527; 2010).

Orofacial clefts comprise a range of congenital facial deformities. The prevalence of orofacial cleft is reported as one in every 500 to 1000 births.1 Golalipour et al,2 referenced oral cleft prevalence as 1.34 per 1000 in whites, 0.41 per 1000 in African Americans, 0.34 per 1000 in Africans and 2.13 per 1000 in Japanese. Calzolari et al3 reported that the cleft lip and palate is a common congenital anomaly with significant variation depending upon geographical location, racial and ethnic background and socio economic status. These Clefts may vary from minor notching of lip or bifid uvula to complete unilateral or bilateral cleft of the lip and palate.
Exact cause of BCLP is unknown. Watanabe A et al4 found that a missense mutation, 1355G>A, and one rare single nucleotide polymorphisms haplotype may play a role in the development of cleft lip and/or palate in the Vietnamese, and cleft lip and/or palate and cleft palate only in the Japanese.
Morand and Raphel5 described bilateral cleft lip and palate as the most serious anomaly because of the inherent disturbance of maxillary structures and because of the grave disturbances they inflict on the development of the middle third of the face. Mulliken et al6 reported that infants with complete bilateral cleft lip/palate appear different because they have nasolabiomaxillary hypoplasia and hypoplastic septum, small alar cartilages, deficient basilar columella, underdeveloped contralateral philtral ridge, ill-defined Cupid\'s bow, thin vermilion-mucosa on both sides of the cleft, a more severely hypoplastic nasal tip, tiny prolabium and small/mobile premaxilla which is displaced anteriorly and suspends from the tip of the nasal septum whereas the nasal alae are stretching over the cleft. Because of the displacement, bilateral cleft anomaly is difficult to correct and camouflage.
The protruded segment renders the surgical repair and alignment of the pre-maxillary segment very difficult and is a challenge for reconstructive team. The determinant of difficulty for cheiloplasty in infants with bilateral cleft lip and palate (BCLP) is the extent to which premaxilla is protruded7 and is the most troublesome malalignments of the alveolar arch in such patients. Cheiloplasty with markedly protruded and deviated segment may not end up in good results.
The rationale behind "Maxillary Orthopaedics" as described by McNeil, Burstone and Rosenstein is that early segment alignment will allow the maxillary halves to develop normally even though a normal union is not present.8
Since then a number of active and passive appliances have been reported in the literature. The appliances used to align the protruding premaxilla include intraoral appliances9-11 and combination of intraoral and extraoral appliances.7,12-15 Santiago et al14 demonstrated that the use of pre-surgical infant orthopaedic plate prior to initial lip repair helps in achieving alignment of premaxillary segment and elongation of the columella attributing to increased nasolabial mucosal lining surface area. Grayson and Cutting16 described that the pre-surgical nasoalveolar molding and pre-maxillary alignment are known to facilitate initial surgical repair and reduce post surgical scarring. During the initial 2 to 3 months of life the plasticity of cartilage and mouldability of the alveolar bone segments especially the premaxilla is high that helps in achieving premaxillary retraction, derotation and approximation of the cleft alveolar segments. This high plasticity is due to the high levels of hyaluronic acid, a component of the proteoglycan intercellular matrix17 and maternal oestrogen circulating in the neonates. 16
In recent years devices of various designs have been used as nasoalveolar molding appliances for active alignment of the cleft alveolar segments prior to initial lip repair. Such appliances are usually consisting of an intra-oral palatal plate that obturates the oronasal defect and extra-oral attachments which mainly consist of combinations of straps, tapes and springs.18 With the introduction of soft acrylic the Pre-Surgical Infant Orthopaedic Plate (PSIOP) was designed which is self retentive and does not require any extra-oral means of retention. A custom made self retentive orthopaedic plate with anterior ring was designed for nasoalveolar molding of the neonates born with bilateral cleft of the lip and palate.19 Idea behind this innovative device with anterior acrylic ring that surrounds pre-maxilla was to retract and align the protruded and rotated pre-maxillary segment without combination of extra oral attachment.

The present study is a Quasi experimental, intervention type and was conducted in the orthodontic department of dental section of CH & ICH Lahore with the permission of hospital ethical board. The non probable purposive sample consisted of 35 subjects. Out of this sample size, 27 subjects were males and 8 were females. Median age of the patient used in this study was 7 days (1 Day - 13 Days).
Patients with complete bilateral cleft lip and palate were included in the study, while patients with incomplete bilateral cleft lip and palate and syndromic patients were excluded.
Consent was taken from the parents and a detailed history proforma was prepared for each patient, comprising relevant information and a demographic data was obtained. The chair side clinical pre treatment records were obtained in the form of extra oral/intra oral photographs (Figure-1a,b and c), 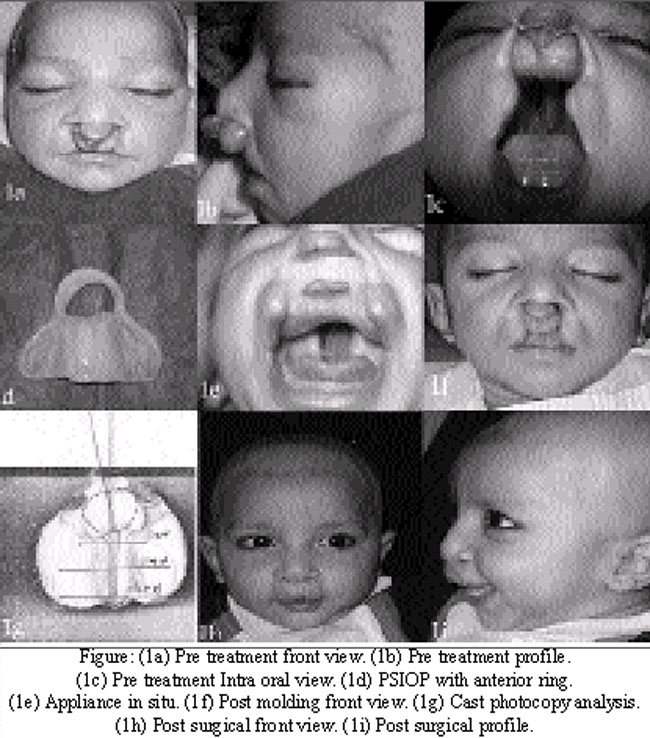 anthropometric measurements of the columella and prolabium with finally an initial impression with rubber based impression material (Elite H-D+, Putty Soft Normal Setting, Vinylpolysiloxane Impression Material, Z hermack) was taken and cast prepared in stone plaster.
Patients were treated for a period of almost 3 months, with custom made orthopaedic plate incorporating a self-cure acrylic ring around the protruding premaxilla (Figure-1d). The plate was made self retentive by the addition of soft acrylic (GC Corporation Tokyo, Japan) on its palatal surface, filling the cleft area (Figure-1d,e). This innovative self retentive plate was made up of acrylic which comprised of two parts; the palatal plate covered the palatal defect and served as a passive obturator and the anterior part of the plate extended as a ring around the protruded and deviated premaxilla (Figure-1d,e). This ring acted as an active part to align and retract the malposed premaxillary segment. Taking care of the air passage, palatal cleft gap was filled with soft acrylic to attain retention. Later on weekly activation of the ring by 1mm addition of hard self cure acrylic along the inner surface and removal from the outer surface was undertaken to maintain uniform thickness of the ring. For correction of pre-maxillary rotation, more than 1 mm acrylic was further added against the area to be depressed. The protruding premaxillary segment was aligned and retracted to desired position (Figure-1f ) where surgical repair of the lip would be more feasible, leaving fewer scars (Figure-1h,i). Anterior edge of the palatal plate within the margins of acrylic ring was trimmed slightly more than the addition of acrylic ring on each activation. This was done to facilitate retraction of the premaxillary segment. The palatal plate was adjusted every two weeks by adding self cure ortho acrylic on the palatal surface, followed by insertion and adaptation of the plate. On curing, the same amount of acrylic was removed along its outer and oral surface.
Photocopies were taken for both pre and post molding casts for recording linear and angular measurements (Figure-1g). In this study, a total of 8 variables were used comprising 6 linear measurements and 2 angular measurements (Table).
Results were based on the measurements from pre and post moulding records. Results were tabulated and analyzed by using SPSS 12.
The linear and angular measurements from the cast photocopies are: Retraction of premaxilla, Rotation of premaxilla, Septum deviation, Intercanine width, Inter molar width.
The linear measurement from the cast: Downward movement of premaxilla (with the help of soft vinyl scale)
Anthropometric measurements: (Directly from the skin with the help of soft vinyl scale) included Columellar length and Prolabium length.

The average age of mothers of the studied patients was 26 years (19-33). Percentage of the mothers who had taken some form of medication (pain killer, antibiotics and herbal medicine) during their first trimester of pregnancy was 29% while those subjected to accidental radiation exposure was 1%. However, most of the mothers belonged to the socio economically compromised class. The percentage of consanguineous marriages was remarkably high being 75%. Three of the affected neonates presented with positive family history of cleft deformity, where one father, one sister and two first cousins were reported to have oral clefts.
The results of variables for intervention were retraction of pre-maxillary segment to be 3.80 ± 1.3 mm. Derotation of the pre-maxilla was recorded as 5.41 ± 7.4 degrees, whereas septum deviation was 1.67 ± 1.48 degree. The increase in columellar as well as prolabium length recorded was 2.24 mm and 1.85 mm respectively. Intercanine width was increased by 0.78mm after molding. The inter-molar width however showed an increase of 1.02mm .The downward movement of premaxilla measured from the cast was 2.92 ± 2.3 mm (Table). 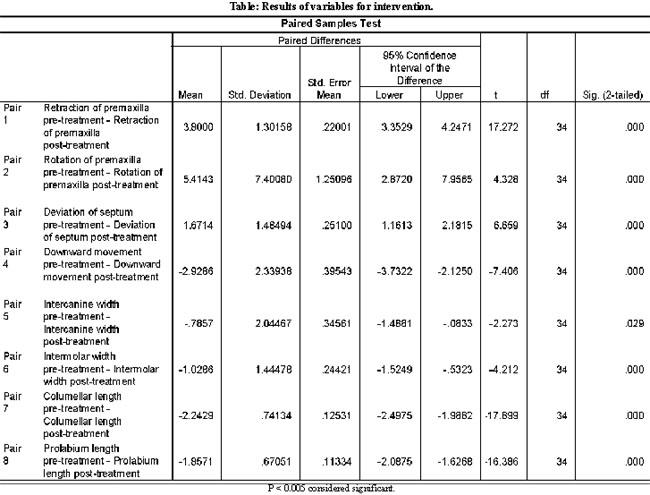 The study proved that the orthopaedic self retentive ring plate is comfortable to wear and simple to use and cost effective. Maxillary growth is facilitated with this device and thus functional activity. It causes significant retraction of the premaxillary segment without applying extra oral forces, produces columellar elongation and increase in prolabium length without additional scarring.
The primary cheiloplasty and rhinoplasty becomes more precise with this appliance by making the lip tension free and maintaining the symmetry of nares.

We acknowledge contributions from our Post-Graduate students, Para-medical / Dental staff and our computer operators during this study. The services rendered by the Plastic surgeons and the Paediatric surgeons are highly appreciated.