Craniocerebral Aspergillosis: A review of advances in diagnosis and management

Craniocerebral aspergillosis is a rare but dangerous central nervous system infection. The infection has a spectrum of presenting features, mostly affecting immunocompromised individuals. The incidence appears to be on the rise that has been especially observed in the immunocompetent population. A high index of suspicion, a comprehensive understanding of the infectious process and advanced laboratory and radiological diagnostic techniques, allow early diagnosis. Surgery, followed by systemic anti-fungal medications, remains the cornerstone of management. Early administration of empirical anti-fungal agents along with immunomodulators may further improve prognosis. Immunocompetent patients tend to have better outcomes as compared to those who are immunocompromised. Patients with intradural disease carry the worst prognosis. 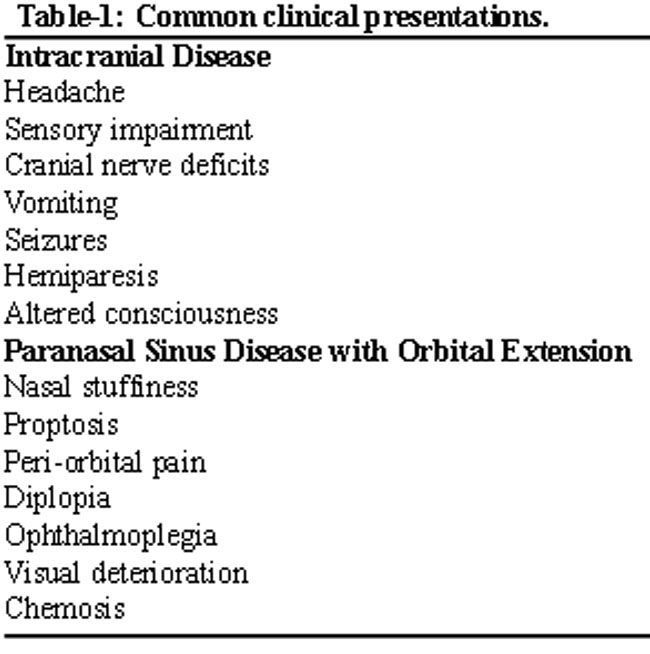 Outcome of craniocerebral aspergillosis is different in immunosuppressed and apparently immunocompetent hosts.32 In immunocompromised hosts mortality is reported to reach more than 95%, and even 100 % in patients with underlying malignancies.33 In apparently immunocompetent hosts reported mortality varies from centre to centre, but ranges from 40 to 80%.2 Patients harbouring mainly sinonasal disease with only orbital and/or cranial base bony invasion/destruction, carry a very good prognosis (mortality < 20%).4 Outcome in extradural aspergillosis is much better than in patients with intracerebral involvement and outcome is worse in patients with intraparenchymal disease especially with vascular invasion.2> 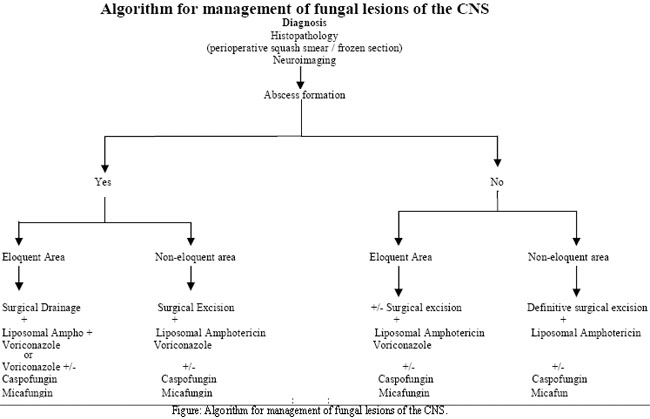 Our centre deals with a large volume of patients with isolated sinonasal aspergillosis, mainly catered by the otorhinolaryngologists.34 As mentioned previously, these patients do extremely well with local clearance and antifungal medications, with the main concern being local recurrence. We also deal with a significant number of patients with intracranial disease, both extradural and intradural. Fortunately such patients are not so common.2 Newer reports are strongly suggesting improved outcome with pre-medication prior to surgery have also emerged.35
Patients with extradural disease also do reasonably well with local debridement (whenever feasible) along with antifungal medications, the main risk being vascular invasion and dural breach, both of which greatly affect outcome. These patients are managed by the otorhinolaryngologists and neurosurgeons together, at times both operating at the same time. The most challenging group of patients remain the very few who harbour intracranial intradural disease. These patients are managed mainly by the neurosurgery team with assistance from otorhinolaryngologists. The input of ther specialties such as infectious disease experts, endocrinologists, microbiologists and intensivists is also of paramount importance. > 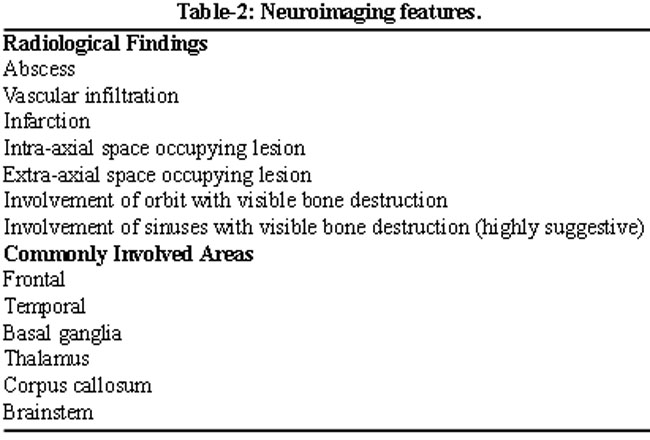 Our institute is a tertiary care facility catering to an estimated population of 20 million. Over the past eight years, we have operated upon 17 patients with intracranial intradural aspergillosis. Of these 14 were males and 3 were females; the mean age of these patients was 37 ± 17 years (2-74 years) and the mean duration of symptoms was 3 ± 2 months (range 2 weeks to 6 months). All but three of these patients were immunocompetent, two patients suffering from haematological malignancies and one patient being a diabetic. The disease mainly involved temporal lobes in majority of patients (9 of 17). Pre-operative diagnosis of aspergillosis was suspected in 14 of these patients, based on clinical and radiological features, of which 13 received pre-operative antifungal medications. In five patients either the patient's condition or the extent of disease precluded radical resection and these patients underwent minimally invasive biopsies (3 patients), external ventriculostomy (one patient) or burr hole aspiration of abscess (one patient). All the rest of 12 patients underwent radical surgeries aimed at removing entire disease load. All patients were started on high dose antifungal medications post-operatively. At mean follow up of 5 months, all patients managed with minimally invasive biopsy and chemotherapy and half of patients managed with radical surgery along with chemotherapy expired. However, 6 of the 12 patients managed with radical surgery were still alive, all with good outcomes, four having a Glasgow Outcome Score (GOS) of 5 and two having a GOS of 4. Pre-operative neurological status was the single most significant indicator of poor outcome although none of the other factors such as age of patient, duration of symptoms, extent of disease or pre-operative administration of antifungal medications could be shown to affect the outcome, perhaps due to the small sample size.

Aspergillus infection of the CNS is an uncommon clinical entity, affecting mainly the immunocompromised. The disease presents in a number of unusual ways and although a multitude of clinical, biochemical and radiological features have been described, the diagnosis remains elusive. The problem is further compounded when the host is apparently immunocompetent, which lowers the clinical suspicion. Radical surgery followed by systemic antifungal medications offers the best hope for survival. Despite better understanding of the offending organism, pathophysiology, clinical course, and development of more effective antifungal medications, the prognosis remains poor. High index of suspicion, early diagnosis and aggressive surgical management, followed by medical therapy, by an inter-disciplinary team, may help to improve outcomes.