An unusual foreign body: A pendant

Madam, a 12-year-old female presented to the emergency room with a complaint of swallowing a pendant two hours ago. She had vomiting, nausea, hypersalivation and dysphagia since then. During anamnesis, she had swallowed her pendant while talking and joking with friends. There was no history of psychiatric disease. On admission her vital signs were normal. Subcutaneous amphizem was not observed during physical examination of the neck. The oropharynx and lungs were normal. A swallowed radiolucent object (pendant) was visible in the upper esophagus (Figure-1). 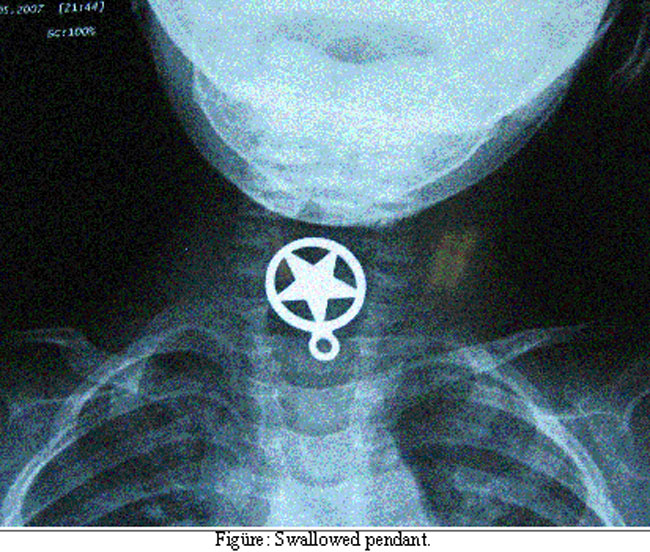 The pendant in esophagus of the patient was removed endoscopically and the patient was discharged 2 days later.
Foreign body ingestion occurs commonly in children and in specific high-risk groups of adults.1 Foreign bodies in the upper GI tract are usually swallowed, purposefully or accidentally. Literature scanning demonstrates that coin, battery, needle, bottle, glass etc. foreign bodies are frequently encountered in the gastrointestinal system.2 However, no pendant aspiration was encountered so far. Possibly this is the first case in literature. This report presents a patient with an unusual foreign body in the esophagus. Foreign bodies in the gastrointestinal tract can result in serious complications depending on the size and shape of the ingested object.3 Foreign bodies are detected on plain X-ray.4,5 Treatment depends on the swallowed object. While sharp objects and batteries are surgically removed, blunt objects like coins are expected to be discarded with defecation.5 Young children often put any object they find into their mouths and may accidentally swallow them. It is advisable not to put any article in the mouth specially while talking.