Objectives: To explore the preferences of women; once at the time of delivery and then three months later, in using contraceptive methods during post partum period.
Methods: A sample of 575 women who gave birth during July 2007 and February 2008 in Vali-Asre teaching hospital of Zanjan, were recruited and interviewed once after delivery and then three month later. The interview questions included demographic characteristic and questions assessing the tendency of mothers to use the contraceptives they preferred at time of delivery and three months later.
Results: According to 537 (93.4%) of interviewed mothers, they intended using at least one contraceptive after getting discharged from the hospital. This figure dropped to 438 (76.1%) three months after delivery. Women who expressed the desire to use minipill after delivery were 169 (29.3%). However this value rose to 187 (32.2%) three months later. The difference was not statistically significant. There was significant relationship between type of contraceptives used and women\'s age, number of children, place of residence and level of education three months following delivery.
Conclusion: Results suggest that health care must focus extensively on giving necessary information and consultation to pregnant women also their partners to help to improve selection of most favourite and safe method of contraception (JPMA 60:714; 2010).

Selecting appropriate contraceptive is a major concern in postpartum period. Pregnancy and child bearing may change a woman\'s sex behaviour and use of preferred contraceptive method.
Physicians and midwives pay little attention to preferences and attitudes of women in post partum period. Postpartum period is very cruicial as it is marked by psychological changes and stabilization of hormones. Therefore, it is risky both for the mothers and their partners to use unfavourable contraceptives. Thus, providing effective, high quality prenatal and postpartum contraceptive counseling can reduce unintended pregnancies, decrease maternal and foetal morbidity and mortality, and prevent abortions.1 In postpartum period choosing a contraceptive depends on many factors including cultural issues, literacy, time of resuming sexual activity after delivery, the infant feeding choice and using a temporary versus a permanent method.2,3 Unintended pregnancy can bring about unfavorable health consequences for the newborn. For instance, delays in obtaining early prenatal care (sometimes associates with delays in pregnancy recognition). Also women suffering unintended pregnancy are less likely to take vitamins and consequently have an increased risk of a neural tube defect in their foetus. Infants born by women who are not prepared for pregnancy are more likely to be of low birth weight, premature and/or small for gestational age. Finally, an unintended pregnancy can have long-term negative health implications for the infant. In this sense the risk of unintended pregnancy can be minimized by the regular and appropriate use of contraception.4
While the suppressive effect of lactation on ovarian function is well established and it can provide contraceptive effect, this effect is altering and not reliable for every woman.5 Women are aware of the diminished risk of pregnancy during the period of postpartum amenorrhea. This perception, plus believing that modern methods of contraception are "strong" and potentially damaging to health, can result in women being reluctant to adopt family planning methods soon after birth, despite a desire to avoid closely spaced pregnancies.1
Family planning may be improved if clinicians are aware of woman\'s knowledge, needs and expectations.2 Majority of women especially in urban areas do not refer to public health centers after delivery so data about postpartum contraception use is limited. Therefore the aim of this study was to determine the most widely preferred contraception methods at the time of delivery and after 3 months.

This was a descriptive study in which 575 postpartum women who had delivered healthy babies were selected using a convenient sampling method between July 2007 and February 2008 at Vali-Asre teaching hospital of Zanjan, Iran. Vali-Asre Hospital is the main referral center for delivery in Zanjan province and includes about 50% of all cases of the province. Selected women were interviewed after delivery and also three month later. Of the total, 25 women were excluded from the study because we could not access them 3 months after delivery. Prior to interview a voluntary written consent form was signed by each of the interviewees. The interview questions included demographic characteristics such as age, number of children, place of residence (urban/rural), educational status (illiterate, primary school, high school and higher education degree) and their preferred contraceptive at the time of delivery and three months later. The significance differences were calculated using Chi-square and Fisher exact test. P-Values less than 0.05 considered significant. All analyses were performed using SPSS 11.5. 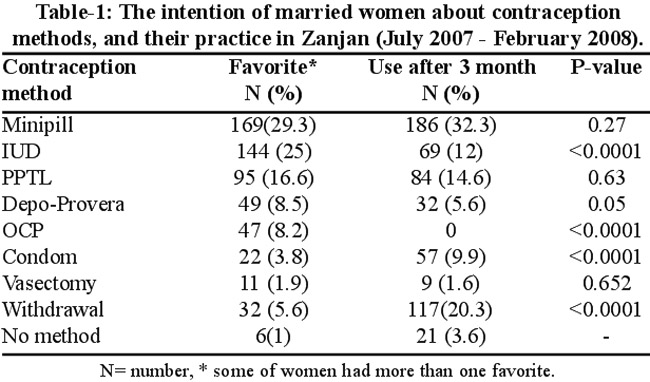 All mothers continued regular breast-feeding after three months. The results showed significant relationship between the type of contraceptives used and women\'s age, number of children, place of residence and educational status.
Overall, minipill was the most commonly used contraceptive by the mothers. There was significant relationship between mothers\' age with the use of minipill and Tubal Ligation (TL) (P<0.0001). Use of minipill was more common in mothers with less than 30 years of age whereas postpartum TL was more common amongst women who were 30 years of age or older (Table-2).

According to the findings, a higher level of education determined an increased use of condoms (P=0.003) and the decreased preference of TL (P<0.0001).
Using minipill (P<0.0001), condom (P = 0.014), withdrawal (P=0.031), Depo-Provera and IUD (0.022) were decreased indirectly by number of children.
Minipill intake was significantly common among rural interviewed women as compared to use of condom in urban populace (P<0.0001).
Findings indicated that twenty six (34.7%) of 75 women with four children and more did not intend to postpartum TL and their reasons for this were being afraid of TL complications (10 women), not having their husband\'s permission (9 women), intending to have a son or daughter which they did not have (4 women), age less than 30 years (2 women) and intention for having more children (1 women).

The differences between the preferred contraception methods and their use three months following delivery indicates women\'s lack of knowledge about postpartum contraception methods. Relying on breastfeeding as a safe measure to prevent pregnancy may lead to unintended childbearing without spacing. It is therefore suggested that health care providers should focus more on giving necessary information and consultation to pregnant women and their partners to improve their choice of preferable and safe contraceptives.

The authors thank Zanjan University of Medical Sciences for their financial support.

Pattern of presentation and management of Ca breast in developing countries. There is a lot to do