Frequency, clinical characteristics and outcome of diabetic ketoacidosis in children with type-1 diabetes at a tertiary care hospital

Objective: To observe the frequency, demographic data and outcome of diabetic ketoacidosis (DKA) in children with established type 1 diabetes and newly diagnosed diabetes at a tertiary care hospital.
Methods: The case record review was done of children admitted with the diagnosis of DKA at The National Institute of Child Health, Karachi from 1st June 2008 till 31st May 2009. All records with the diagnosis of DKA were reviewed and those children with only hyperglycaemia, or who did not fulfill the criteria of DKA were excluded. The demographic data and laboratory investigations which included blood sugar monitoring, arterial blood gases, urine analysis especially for ketones, serum electrolytes, complete blood count and blood culture were reviewed. The previous numbers of admissions in children with established DKA were also noted with reasons. The duration of symptoms and fluids required, time of recovery, complications, and outcome were noted and compared between those with established diabetes and children with newly diagnosed diabetes. Data was entered and analyzed on SPSS version 15.
Results: Out of 124 case records, 117 were included which fulfilled the criteria of DKA. A large number, 65 (55.5%) children were in the > 10 years age group with a female predominance. Out of 117 children 50 (42.7%) had established Type 1 diabetes and 67 (57.2 %) children had newly diagnosed diabetes. The commonest presenting complaints in both groups were respiratory distress (87.1%) and vomiting (77.7%). The symptoms of  polyuria, polydipsia and nocturia were more among the newly diagnosed children as compared to those with established diabetes with a significant p value <0.001. The comparison of clinical features and laboratory investigations of the two groups showed no difference except that those children with established diabetes improved earlier, required lesser duration of intravenous fluids and their insulin was changed to subcutaneous in less time compared with newly diagnosed children. (p<0.001). The commonest complication in both groups was hypoglycaemia followed by hyponatraemia, more in newly diagnosed diabetic children.
Conclusion: These soaring numbers are just from one center, highlighting the issue of this much neglected disease in our country. More studies on a larger scale are needed to assess the prevalence/incidence in our children and also more emphasis with educational programmes on prevention of recurrent attacks of DKA (JPMA 60:725; 2010).

Diabetic ketoacidosis (DKA) is an acute life threatening metabolic emergency, frequently requiring hospitalization in children with type 1 diabetes and still remains their major cause of mortality.1,2 There is a wide variation in the range of children presenting with DKA as the initial manifestation of diabetes depending on the study population. In children with established diabetes the incidence is more homogenous.3,4 International studies have shown that between 15 and 67% of children, newly diagnosed type 1 diabetes mellitus presents in DKA. The estimated risk of DKA in children /adolescents with established type 1 diabetes is 1-10 per 100 person/year.5,6
DKA still remains a significant complication of type 1 diabetes associated with a variety of significant adverse events.6 Studies indicate that further efforts to reduce the occurrence of DKA must be focused upon early diagnosis and intervention in newly diagnosed children. The physicians1 aim is to reduce the incidence of DKA through awareness and sensitization of the disorder, and in children with established diabetes through focused management and education.  Hence, prevention of DKA, especially after initial diagnosis, is still a primary challenging target for physicians.7 This desirable goal is achievable through self management programmes and has been amply documented internationally but no data on this aspect is available locally.8
DKA is one of the major neglected health issues in Pakistan; although we are managing a large number of children with Type 1 diabetes and believe that its incidence is also on the rise in our country but unfortunately local data about the exact incidence / prevalence is not documented.9
National Institute of Child Health, Karachi is a tertiary health care hospital treating children from Sindh, Punjab and even more remote villages all over Pakistan. The institute has been treating diabetic patients since many years and has an average of 8-10 DKA children per month. Majority of these children present with DKA due to late diagnosis and referral, some have been taking oral hypoglycaemic agents or were being managed for acute abdomen. We therefore reviewed our data to observe the various ages, frequency, clinical presentations and outcome of DKA in children with established type 1 diabetes and newly diagnosed diabetes.

The case record review was done of children admitted with the diagnosis of DKA at National Institute of Child Health, Karachi from 1st June 2008 till 31st May 2009. All records with the diagnosis of DKA were reviewed and DKA was diagnosed if hyperglycaemia (blood glucose > 200mg/dl), venous pH < 7.3 or bicarbonate < 15 mmol/L and ketonuria were present.5 Those children with only hyperglycaemia, or who did not fulfill the criteria of DKA were excluded.
The children were divided into two groups, those with newly diagnosed type 1 diabetes (first episode) and those with established diabetes and on treatment with insulin. In children with established diabetes relapse of DKA is common, which occurs due to sudden cessation of subcutaneous insulin or lack of monitoring.5 In children with established diabetes , those having one episode of DKA/year were non relapsers and those with at least two episodes of DKA per year were relapsers.6
In all children the duration of signs and symptoms and in children with established diabetes the duration of diabetes; number of DKA admissions with reasons, dose and type of insulin regime and compliance with treatment were reviewed. The laboratory investigations which included random blood sugar (done 2 hourly), arterial blood gases (4 hourly), detailed urine report especially for ketones, serum electrolytes, complete blood count and blood culture between the two groups were observed. The management in the Paediatric Intensive Care Unit, regarding duration of intravenous fluids and insulin infusion, administered according to the standard DKA protocol of ISPAD (International Society of Pediatric and Adolescent Diabetes) were noted.10
Random blood sugar or casual plasma glucose concentration is defined as done at any time of the day without regard to last meal( greater than 200mg/dl with symptoms requires investigation). Hypoglycaemia was defined as blood sugar less than 60 mg/dl, Hypokalaemia: serum potassium less than 3 mEq/L, Hyperkalaemia: serum potassium more than 6 mEq/L, Hyponatraemia: serum sodium less than 135mEq/L after calculating corrected sodium, Hypernatraemia: serum sodium more than 160mEq/L.6,10,11 Cerebral oedema was defined as having occurred if the child developed irritability, decreased conscious level, rising blood pressure, decreased heart rate and the patient was treated with intravenous mannitol, with or without radiologic (CT) confirmation.10,12
Time for resolution of DKA was recorded in all children and the criteria for resolution included a normal sensorium and vitals, no emesis, resolution of acidosis (normal pH, serum bicarbonate of > 18mEq/L and normal anion gap).10 After resolution of DKA, newly diagnosed children were shifted to ward to counsel about disease, insulin technique and storage and also nutritional advise. Blood sugar was considered to be in normal range if fasting was less than 100mg/dl and 2 hours post meal was < 140mg/dl. Outcome of DKA was defined in terms of death or survival of the child.
Data was entered and analyzed on SPSS version 15.
Statistical Analysis:
The qualitative data (Table-1) 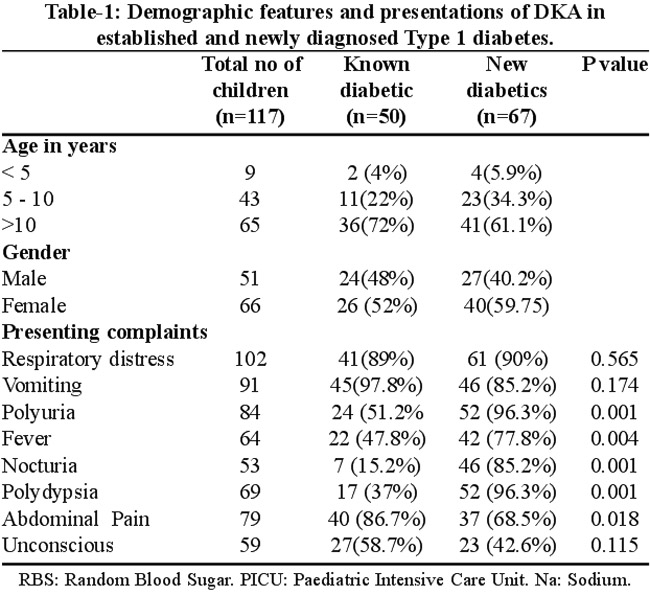 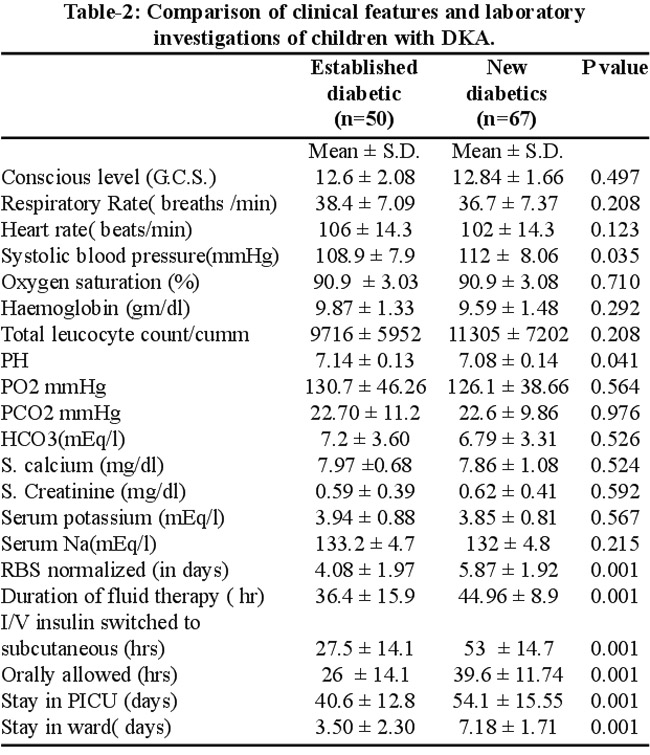 student un-paired t-test was used and mean and standard deviations were obtained.
In all statistical analysis only p-value <0.05 was considered statistically significant.

The charts of 117 children fulfilled the criteria of DKA; 50 (42.7%) had established Type 1 diabetes and 67 (57.2 %) children were newly diagnosed Type 1 diabetes. A large number 65(55.5%) of children were > 10 years of age with a female predominance in both groups. The commonest presenting complaints in both groups were respiratory distress (87.1%) and vomiting (77.7%) (Table-1).
In children with established diabetes, majority of children 36 (72%) were in > 10 years age group and the main identified cause of DKA was omission of insulin dose. Out of the 50 children with established diabetes, 34(68%) children were non relapsers and 16 (32%) were relapsers. The promoting factors for DKA included insulin omission in 19 (38%) children (9 did it because the child was vomiting, 4 because the child had decreased appetite and 6 due to financial reasons), urinary tract infection in 10 (20%), enteric fever in 6 (12%) and in 15 (30%) children the cause was unknown.
Majority of children having the first episode of DKA as the presentation of type 1 diabetes belonged to the >10 years age group. Sixteen (23.8%) children had urinary tract infection at the time of diagnosis and in the remaining 51 (76.1%) no cause could be identified. Thirty eight (56.7%) children presented with weight loss. The symptoms of polyuria, polydipsia and nocturia were more among the newly diagnosed children as compared to those with established diabetes (p <0.001).
The comparison of laboratory investigations of the two groups showed no significant differences except that children with established diabetes improved earlier, required less duration of intravenous fluids and their insulin was changed to subcutaneous in less time compared with newly diagnosed children (p<0.001).
All children were acidotic and had urinary ketones 3+ at presentation. There were no significant differences between the two groups regarding acidosis or hyperglycaemia at the time of admission. Out of 117 children 3 ( 2.5%) received injection sodium bicarbonate, as after rehydration and insulin infusion their acidosis did not improve and their pH was less than 6.7 with cardio respiratory compromise. The stay in PICU and ward of children with established DKA was less as compared to newly diagnosed children (p<0.001) . The children who were newly diagnosed had a longer stay in ward because they had to learn the technique of insulin administration and nutritional counseling.

Table-3 shows the various complications encountered during management of DKA. The commonest complication was hypoglycaemia followed by hyponatraemia in both groups, more in the newly diagnosed children (19% and 4.4%). Fortunately there was no mortality and none of the children developed cerebral oedema or renal failure during the treatment.

This study highlights a large number of newly diagnosed children presenting with DKA; these figures are from one center only and definitely more studies at a national level will help us to determine the incidence of DKA in our country. The study also shows the long term need for counseling and educational programmes for children and their families with established diabetes, to prevent complications especially DKA.