Inducible clindamycin resistance due to expression of erm genes in Staphylococcus aureus: Report from a Tertiary Care Hospital Karachi, Pakistan

Objective: To assess the frequency of phenotypic expression of inducible resistance of clindamycin due to expression of erm genes, in clinical isolates of Staphylococcus aureus (S. aureus), by double disk diffusion test (D-test).
Method: This was a cross sectional study conducted in the clinical laboratory of Aga Khan University Hospital, Karachi. A total of 2432, non duplicate clinical isolates of S. aureus, consisting of 1562 methicillin sensitive S. aureus (MSSA) and 870 methicillin resistant S. aureus (MRSA), were selected from February 2007 to January 2008. One hundred and thirty eight isolates of S. aureus were selected based on discordant resistance pattern (erythromycin resistant and clindamycin sensitive) on Kirby Bauer Disk Diffusion test and phenotypic expression of inducible resistance was assessed using D-test.
Result: Analysis of 2432 isolates showed that 64% (n=1553) were susceptible to both clindamycin and erythromycin by disc diffusion method, while 30% (n=741) showed constitutive resistance (in vitro resistance to both drugs). 6% (n=138) isolates showed clindamycin-erythromycin discordance on disc diffusion (in vitro sensitive to clindamycin and resistant to erythromycin). Among the discordant isolates 72% (n=99) had inducible resistance phenotype detected by D-test and of these 85 isolates (62%) were MRSA.
Conclusion: Inducible resistance is common in our clinical isolates; D-test (a simple phenotypic test) should be performed on all S. aureus isolates showing clindamycin-erythromycin discordance on disc diffusion, to avoid erroneous reporting resulting in treatment failure (JPMA 60:750; 2010).

Staphylococcus aureus (S. aureus) is a common cause of both community and nosocomial acquired infections. Infections range from minor skin infections to life threatening conditions such as endocarditis, pneumonia and septicaemia. Increasing antimicrobial drug resistance in S. aureus is one of the major concerns.1 Rate of methicillin resistant S. aureus (MRSA) has dramatically increased in recent years.1,2 In Pakistan exact prevalence of MRSA is not known, however it is a common hospital acquired pathogen and different hospitals have reported its prevalence to be around 22-39%.3-5 Traditionally MRSA has been considered a nosocomial pathogen and vancomycin considered as drug of choice. However vancomycin usage is associated with considerable side effects and cost. Moreover overuse of vancomycin has led to the emergence of staphylococcal strains with reduced susceptibility to it.6 Also in the past decade MRSA has emerged as pathogen for community acquired infections (CA-MRSA) Unlike hospital acquired MRSA, the CA-MRSA are known to be sensitive to drugs other then vancomycin, such as, ciprofloxacin, trimethoprim-sulphamethoxazole and clindamycin (CL).7
CL is a good substitute to treat soft tissue infections by both MRSA and MSSA infections. Its low cost, fewer severe side effects, availability of oral and parenteral forms, lack of need for renal adjustments, good tissue penetration and ability to directly inhibit toxin production are its advantages. CL, further more, is a useful choice in cases of penicillin allergy.8 Again development of resistance especially inducible resistance is a major barrier in its usage.
CL belongs to the macrolide, lincosamide and streptogramin (MLS) family that act through inhibition of protein synthesis. Bacterial resistance to this group may be expressed through different mechanisms including target site modification, macrolide efflux pump and enzymatic antibiotic inactivation.9 Modification of the ribosomal target is encoded by the erm genes that cause production of methylase enzymes which reduce binding of the drug to the rRNA target. This resistance can be either constitutive or inducible. If the erm genes are consistently expressed, isolates show in vitro resistance to erythromycin (ER), CL, and to other members of MLS, known as constitutive resistance phenotype. In case of inducible resistance, the erm genes require an inducing agent to express resistance to CL. ER can act as a strong inducer of methylase synthesis. These isolates known as inducible resistance phenotype show in vitro resistance to ER and susceptibility to CL. CL therapy in this phenotype can lead to clinical failure.10-13 S. aureus can also develop isolated macrolide resistance based on presence of an efflux pump, encoded by the msrA gene which leads to resistance to macrolides and type B streptogramins but not to lincosamides. These isolates known as MS phenotype also show in vitro resistance to ER and susceptibility to CL same as in inducible resistance phenotype, but CL therapy can be safely given in infections with this phenotype and there is no risk of clinical failure. Therefore, it is important to differentiate these two mechanisms of resistance.
Phenotypic detection of inducible resistance can be done by double disk diffusion test (D-test). D-test is simple, reliable, inexpensive and easy to interpret with high sensitivity and specificity.14 Molecular markers for the erm genes are available, but they are costly and inconvenient for everyday use. In a developing country like Pakistan with high burden of MRSA, where health associated finances is borne by the patient, alternatives to vancomycin are in need. Clindamycin is a good option but prevalence of inducible resistance should be known, as it varies by geographical location and bacterial species. So the aim of this study was to assess the frequency of phenotypic expression of inducible erm gene expression in clinical isolates of S. aureus by D-test.

This was a cross sectional study conducted in the clinical laboratory of Aga Khan University Hospital, Karachi from February 2007 to January 2008. 2432 consecutive isolates of S. aureus were collected from clinical samples, by convenient sampling. These comprised of 1562 MSSA and 870 MRSA isolates. Duplicate isolates were excluded.  Sources were wound, pus, tissue, respiratory secretions, bone, joint fluid, ascitic fluid, pleural fluid and blood.  S. aureus was identified using conventional methodology (colony morphology, gram staining, catalase, coagulase test and DNase test). Oxacillin resistance was detected by taking cefoxitin as a surrogate marker.
Susceptibility testing of CL (2 µg), ER (15µg) and cefoxitin (30µg) were performed by Kirby Bauer disk diffusion method and interpreted according to Clinical Laboratory Standard Institute (CLSI) break points.15
Interpretation of the diameters of zones of inhibition was as follows:
ER-S > 23 mm; ER intermediate 14-22 mm; ER- R < 13 mm CL-S > 21 mm; CL intermediate 15-20 mm; CL-R < 14 mm Cefoxitin-S > 22 mm; Cefoxitin-R < 21 mm 138 isolates of S. aureus were selected based on discordant resistance pattern for ER and CL (E-R or I and CL-S) on Kirby Bauer Disk Diffusion test. These isolates were then tested for detection of phenotypic expression of inducible erm genes, by double disk diffusion test (D-test).
Detection of inducible resistance erm gene expression:
Phenotypic expression of erm gene activation was detected by performing D-test using CLSI guideline.15 A 0.5 McFarland equivalent suspension of organisms was inoculated onto a Mueller - Hinton agar (MHA) plate, the ER (15µg) disk was placed 15-26 mm (edge to edge) apart from CL (2 µg) disk on MHA. Plates were analyzed after 18 hours of incubation at 35°C.
Principles of D-test:
When tested in close proximity, ER (inducing agent) diffuses into the media and induces the erm gene expression. This effect extends up to the sensitivity zone on one side of the CL disk leading to a D-shaped zone of inhibition (Figure).
Interpretation of the D-test:
Isolates showing circular zones of inhibition with diameter of < 13 mm for ER and > 21 mm for CL were interpreted as negative for inducible resistance (D-test negative). Isolates with same inhibitory diameters as above but a D-shaped zone around the CL, were interpreted as positive for inducible resistance (D-test positive) (Figure). 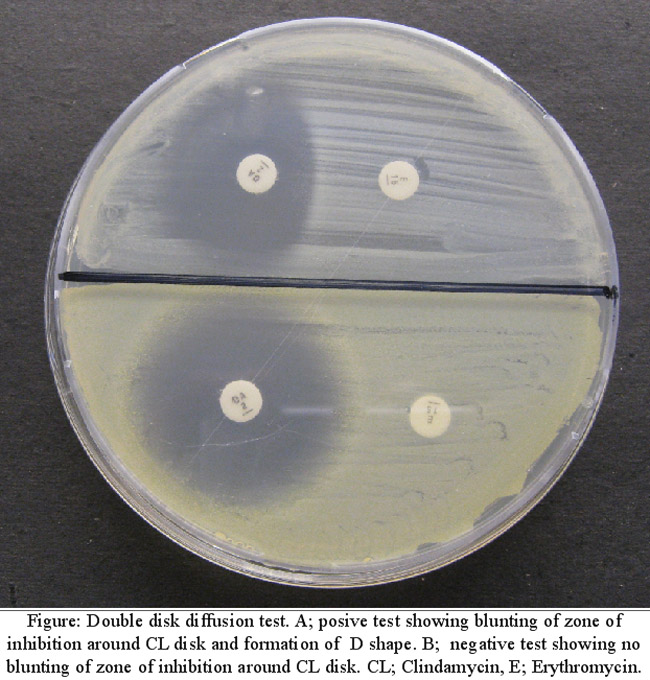 A total of 2432 S. aureus isolates were analyzed during the study period, 1562 (64%) were MSSA and 870 (36 %) were MRSA. Of total isolates 1553 (64%) were susceptible to both clindamycin and erythromycin (CL-S, ER-S). 741 (30%) strains showed constitutive resistance; in vitro resistance to both drugs (CL-R, ER-R). The remaining 138 (6%) isolates expressed clindamycin-erythromycin discordant (CL-S, ER-R) result.
Among the discordant S. aureus isolates, 99 (72%) had inducible resistance phenotype and of these 85 (62%) isolates were MRSA. Frequency of inducible resistance phenotypes in ER-CL discordant S. aureus, MRSA and MSSA is shown in Table.

Our results show that the frequency of inducible resistance amongst MRSA and MSSA was similar.
Overall 99 (4%) out of 2432 isolates of S. aureus included in this study were reported as being resistant to clindamycin based on D-test finding. Such resistance would otherwise have been missed on routine Kirby-Bauer disc diffusion method.

High inducible resistance due to erm genes expression was detectable by D-test in discordant S. aureus isolates. In view of therapeutic implication, D-test was found to be a simple effective test that should be performed on all S. aureus isolates showing clindamycin-erythromycin discordance on disc diffusion.