Objective: To report the results of tension-free repair of incisional and ventral hernias by stoppa\'s sublay technique.
Methods: This study included 200 Patients, undergoing sublay mesh repair for incisional and ventral hernias (Para-unbilical, epigastric, right sub costal and lumbar hernias) at Ghulam Muhammad Mahar Medical College and Hira Medical Center Sukkur, during a period of four years from January 2005 to December 2008.
Results: Wound infection was found in 6.5% and seroma formation in 2.5%. Mortality was 0.5%. No recurrence was seen during the follow-up period of 2 years. No septic mesh was removed in the series.
Conclusion: The tension-free repair of incisional and ventral hernias with stoppa\'s sublay mesh repair technique is safe, effective and an easy procedure with acceptable morbidity and no recurrence (JPMA 60:798; 2010).

Incisional or ventral hernias may occur in the area of any prior surgical incision and can vary from very small to very large and simple to complex. They may develop as the result of disruption along or one adjacent to the area of abdominal wall suturing, often subsequent tension placed on the tissue or other inhibition to adequate healing (Infection, poor nutrition, obesity or metabolic diseases). Virtually any abdominal operation can subsequently develop incisional hernia at the scar area including those from large abdominal procedures (intestinal surgery, Vascular surgery , Gynaecological surgery) to small incisions (appendicectony or laparoscopy-port site hernia).1,2
The reported frequency of incisional hernia after primary surgery varies from 1 to 15% and upto 23% in those who develop post-operative wound infection.1,2 The use of continuous, long term absorbable or non-absorbable sutures can decrease the incidence of incisional hernias when applied in a 4:1 of suture length to wound length.3 However, even with the best technique an incidence of at least 10% must be accepted as the long term result.4,5 Effective repair of incisional hernias must include a tension free approach using mesh. Many such hernias were effectively repaired using tension free method-STOPPA\'S sublay mesh repair. The mesh may damage the intra-abdominal viscera if the peritoneum or greater omentum is not interposed between it and the organs.6,7 The results of this repair are more effective with a lower recurrence rate and early and uneventful convalescence. The use of synthetic meshes for repair of incisional hernias had led to significant reduction in the recurrence between 0 to 10%.8,9

This was a descriptive study and included 200 patients, who underwent sublay mesh repair for incisional and ventral hernias (Para-unbilical, epigastric, right sub costal and lumbar hernias) at Ghulam Muhammad Mahar Medical College and Hira Medical Center Sukkur during a period of four years from January 2005 to December 2008.
All patients with incisional and ventral hernias, who attended the surgical out-patient department of the institution, were registered and included in the study. They were diagnosed clinically as palpable fascial or muscular defect at the site of previous surgery. Patients with recurrent inguinal hernias were not included in the study. The patients willing for surgery were admitted a day before surgery and their routine investigations and ultrasound abdomen were carried out. A detailed proforma was filled along with clinical data, operative findings, and postoperative complications.
Operative Technique: Procedure began with excision of the old scar except in 08 cases in which dermoliposectomy was carried out and a transverse suprapubic incision was made. The hernial sac was dissected to expose the circumference of the abdominal wall defect. Here mesh was placed broadly under the defect in the retromuscular layer of the abdominal wall. The mesh extended well beyond the under edges of the hole or defect (about 3-4 cms) and was not merely sewn to the hernia edges. Organs within the abdomen are protected from injury by the mesh by a naturally occurring membrane called "Peritoneum". Adhesions to intestine are there by avoided. Redivec suction drains, one or two, depending upon the size of hernia were placed for initial 3-5 days.
All operations were carried out under general or regional anaesthesia with antibiotic prophylaxis of 3rd generation Cephalosporin, 2 grams daily for initial 2-3 days. The rationale for using 3rd generation Cephalosporin was to provide the prophylactic coverage for both gram positive and gram negative organisms especially in cases of obstructed or strangulated incisional or ventral hernias with obstructed intestine and more chances of gram negative infection. Included were 20 cases with chronic liver disease (CLD); of whom 50% presented with obstructed intestine and chances of gram negative septicemia. Good results were achieved without infection of mesh with antibiotic prophylaxis.
The patients were followed-up initially at 03 months and then at 06 months intervals. The data were compiled on SPSS and results drawn and compared with national and international literature.

Out of 200 patients, 150 (75%) were females and 50 (25%) were males. Age ranged from 23 to 65 years with mean age 43.7 years and median age 45 years. Eighty patients had primary incisional hernia, 15 had first recurrence and 11 patients were already operated twice (second recurrence).
The original operation in cases of incisional hernias was bowel related in 30 cases, Gynaecological in 40, cholecystectomy in 08, appendectomy in 04, renal surgery 05 and others. In majority of cases, postoperative wound infection was the most common cause of hernia formation after primary surgery. Thirty three patients had hernia defect more than 10 cm in diameter, 123 patients had defects between 5-10 cm in diameter whereas remaining had defects less than 5cm. 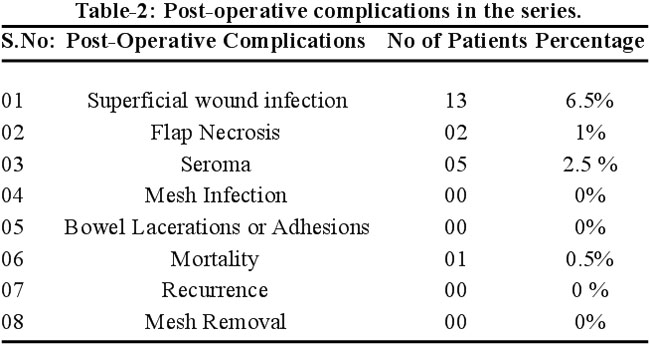 Seroma formation was less (2.5%) because redivec suction drains were used in every case and kept till seroma settled (usually up to 3-5 days). Wound infection (6.5%) was of mild type which healed by simple dressing. Partial necrosis of flap was found in 2 patients in which dermoliposectomy was also done along with mesh repair. Necrotic flap was managed by debridement of necrotic tissue, antibiotics and simple dressings. One patient, known cirrhotic, was operated for obstructed hernia, died on 12th post-operative day due to hepatic failure. No septic mesh was removed in the series.
Post-operative hospital stay in this series ranged from 2-4 days except in 2 patients with wound infection and flap necrosis who stayed in hospital for two weeks. Usually the patient was discharged on 2nd post-operative day. Out of 200 patients, 146 came for follow-up that ranged from 06 months to 02 years. The mean follow up period was 15 ± 5.47 months. No case of recurrence was found during this period. Remaining 54 patients did not report for follow-up after removal of stitches. About 73% of patients were followed-up and 27 % were lost.

Stoppa\'s sublay (retromuscular) mesh repair is the gold standard for incisional and ventral hernias. It is associated with less chances of infection and seroma formation and almost no recurrence and bowel lacerations or adhesions. It is superior and beneficial to primary repair with non-absorbable sutures and other techniques of mesh repair like onlay and inlay techniques, which are associated with more complications and recurrence.
In this study, 200 patients were operated by this technique successfully with minimal complications. Out of 200 patients, about 20 patients were operated with chronic liver disease and ascites, having para-umbilical or umbilical hernias, already under treatment of physician. Some of them developed obstruction or stramgulation and pressure necrosis of overlying skin, and few had a burst hernial sac with oozing of ascitic fluid. Pre- operatively and post-operatively these patients were managed by physician for CLD and ascites. Pre-operatively physician managed their coagulopathy, ascites and portal hypertension , so that they became stable for surgery. Post-operatively physician also managed them for ascites and hepatic function accordingly. The presence of fluid collection anterior to mesh was a frequent finding in the immediate post-operative period.10 These collections, usually haematomas or seromas, should not be mistaken for recurrence of the hernia which may often present similarly.11 The fluid collection resulted from both the porous property of the mesh and the serous discharge in the potential space created during surgical manipulation. Generally none of these patients required drainage since such collections usually disappear spontaneously. In this study, the incidence of seroma was 2.5% compared with 2.7% in local series and 5% to 7.6% in another study.2,12 We used suction drains and compression bandages for the prevention of seroma formation.
Septic complications of the prosthesis (Mesh) have been reported in 0.2 to 0.8%.11 Two types of infections must be distinguished in patients with mesh repair: superficial subcutaneous infection and infection around the mesh. The first usually has no clinical significance. In the second case, vigorous treatment is always necessary. In these cases, a part from antibiotic therapy, puncture and drainage of these infected collections under ultrasound control have been described although in most cases prosthesis removal is inevitable. The superficial infection rate in our series was 6.5% which is comparable with the international figure of 3-8%.13,14 In this study , the deep infection around the mesh has not been found.
Bowel related complications such as laceration of large or small bowel or bowel adhesions to the mesh are infrequent findings with incidences between 0.06% and 0.2%.11 It is known that all prosthesis form adhesions within the peritoneal cavity. In inlay mesh technique, the chances of bowel complications are more, where as in sublay technique the peritoneal cavity contents are separated from mesh by a layer of peritoneum and posterior rectus sheath. The mesh is placed just above the peritoneum layer and in retro-muscular space, so the bowel is not in contact with the mesh. In our study, no complication of bowel was recorded.
Hernia recurrence remains the most frequent complication in patients with an incidence between 10% and 20% for ventral hernias.15 The recurrence rate of primary closure of the fascia is un acceptably high.16-18 Simple repair with non-absorbale sutures (Prolene) is associated with high recurrence rate of up to 55%.19 Poor surgical technique and post-operative wound infection are two most important factors in the development of incisional hernia and its recurrence.17,20 The technique of mesh is very important. If the mesh is sutured to the hernial margins, there is poor incorporation of mesh material and a recurrence rate of 4-11% has been observed.21 The mesh should overlap 3-4cm around the defect.2 In our series, no recurrence was seen. This is comparable with local studies,22 whereas others reported 0-10% recurrence after polypropylene mesh repair.12,18

Tension-free repair of incisional and ventral hernias with stoppa\'s sublay mesh repair is safe, effective and easy procedure with excellent results. It is a gold standard procedure due to its low complication rate and no recurrence.

Safety warnings and first aid instructions on consumer and pharmaceutical products in Nigeria: has there been an improvement?