Nostril stenosis is an uncommon deformity with a variable aetiology. It may be either congenital or acquired. The causes of the acquired form includes trauma, infection and iatrogenic injury to the vestibular skin. Previous surgery including septoplasty and rhinoplasty, overzealous use of chemicals, laser, electrocauterization and traumatic placement of nasal packing to control epistaxis contribute significantly to the development of vestibular stenosis.
Electrocauterization for inferior concha hypertrophy is a simple procedure and is frequently used in otolaryngeology-head and neck surgery. If enough attention is not paid during the operation, it may cause severe nasal obstruction and an aesthetic deformity which cannot be repaired easily. Various techniques have been described for repair of this stenotic segment but correction is difficult due to tendency of wound-contracture and recurrence.
We present a case of a 58-year-old male patient complaining of nasal obstruction and an aesthetic deformity who had sought treatment for stenosis of the left nostril of 6 months duration. Previously, the patient had undergone septoplasty and electrocauterization for inferior turbinate hypertrophy.

Nostril stenosis is a rare deformity that can occur due to various aetiologies. The classical descriptions with its classification such as congenital or acquired hypertrophy are accepted world wide. The causes of acquired hypertrophy are mainly infections, trauma or iatrogenic while congenital causes are rare.1,2 Iatrogenic trauma includes injury due to intubation, trauma during nasal examination, management of epistaxis or surgery of the nose.3 Stenosis of the nostrils due to excessive use of electric cauterization have been reported in the literature.4,5 Moreover, there has been a local study regarding nasal vestibular stenosis and synechia due to electric cauterization.2,6 We present a case of nostril-stenosis due to excessive use of electric-cauterization.

A 58-year-old male patient presented in the outpatient clinic complaining of bilateral nasal obstruction and an aesthetic deformity. The patient had sought treatment for stenosis of left nostril for 6 months. Previously, the patient had undergone septoplasty and electrocauterization for inferior concha hypertrophy. The patient reported overt bleeding from the nose during surgery, which had been controlled by tamponade, external pressure and cauterization with difficulty. The bleeding from the wounds inside the nose recovered after 10 days. The cause of bleeding could not be determined. According to the patient's medical history, he did not use any medication which can cause prolonged bleeding such as acetylsalicylic acid or coumadin. We assumed that the bleeding in the first operation was due to the increase in blood tension because of the pain from the inefficient local anaesthesia. On examination, a moderate degree of stenosis of the left nostril was noted, involving both the alar rim and the left nostril. The right nostril and septum were normal (Figure). 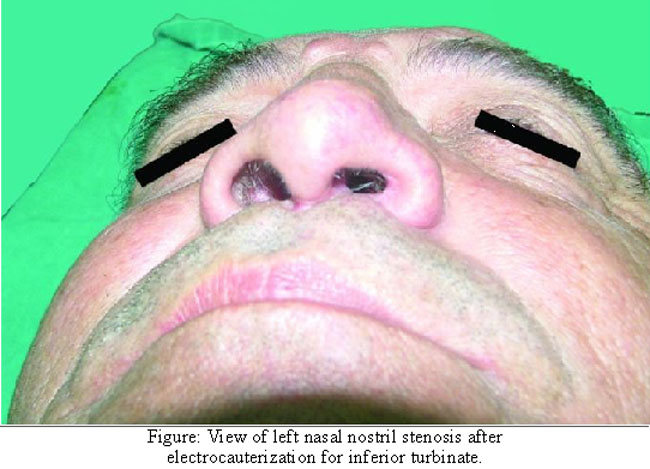 A surgical correction of the nasal stenosis under local anaesthesia was carried out. The scar tissue was excised and a 0.8 × 0.5 cm composite chondro cutaneous graft from the level of helix of the right ear was taken. The donor site in the ear was closed primarily and the left nostril was enlarged and the stenosis was repaired with this graft. Despite a satisfactory outcome being noted after the surgery, cosmetic appearance of the nose was not perfect. However, the patient was pleased with his present situation as compared with previous stage of the surgery.

Unilateral complete nasal stenosis is an uncommon condition and is usually acquired. Previous surgery including septoplasty and rhinoplasty, overzealous use of chemical, laser and electrocauterization, a traumatic placement of nasal packing to control epistaxis may lead to to the development of nostril stenosis.7,8
Nostril stenosis is a very difficult condition to resolve and usually requires specific attention. At presentation patients usually have both nasal obstruction and an aesthetic deformity. To prevent this difficult problem, the surgeon must be very carefully during the surgery so that scar contracture and loss of vestibular lining, the two factors which are mostly responsible for development of nasal vestibular stenosis can be prevented.7 Partial stenosis accompanied by limited tissue loss may be reconstructed with vestibular Z- and/or W- plasties,9 split and full thickness skin grafts,1 a composite chondro cutaneous grafts.10 However, these interventions may not be curative, if a severe stenosis is present. Mavili et al. reported a unilateral acquired nostril stenosis that was successfully repaired with the use of an upper lip flap.11
Karen et al. achieved excellent results in sixteen adult patients using an auricular composite graft.10 The cartilage stiffens the repair and stenting is not needed. The donor site is easily repaired with relaxing incisions. Minimal cosmetic sequelae are seen. Similarly, a composite chondro cutaneous graft from the level of helix of the right ear of our patient was taken and the left nostril stenosis was repaired with this graft. We recommend that it may be an effective option for the treatment of moderate degree of nostril stenosis.
In conclusion, electrocauterization for inferior concha hypertrophy is a simple and frequently used operation. If enough attention is not paid during the operation it may cause very serious nasal obstruction and an aesthetic deformity which cannot be repaired easily. As in this case also it should be emphasized that the bleeding from the nose should be controlled by tamponade, external pressure and bipolar cautery, but not by monopolar cautery and undue power application of electric cauterization.