Magnetic Resonance Imaging appearances are described in three cases of Ankylosing Spondylitis (AS). The different appearances of AS on magnetic resonance imaging are described and their significance in relation to the pathology of this condition is discussed. MRI is increasingly used to detect changes in the spine of patients with AS. Spinal changes associated with spondyloarthritis are florid anterior spondylitis (Romanus lesion), florid discitis (Andersson lesion), ankylosis, insufficiency fractures of the ankylosed spine, syndesmophytes, arthritis of the apophyseal and costovertebral joints and enthesitis of the interspinal ligaments.

Seronegative spondyloarthritis is a general term. Five subgroups of spondyloarthritis are distinguished: ankylosing spondylitis, reactive arthritis (Reiter syndrome), Psoriatic arthritis, Arthritis associated with inflammatory bowel disease (e.g. Crohn\'s disease or ulcerative colitis), and undifferentiated spondyloarthritis. Extra-axial involvement such as uveitis, calcaneal enthesitis, or peripheral arthritis occurs in all five subgroups. The prevalence of whole group of spondyloarthritis has been estimated to be between 0.5% and 1.9%.1 Ankylosing Spondylitis is a common chronic inflammatory disease that affects young male and female patients. The usual age of onset is 26 years. The leading clinical symptom is inflammatory back pain. The disease starts in the sacro-iliac joints and spreads to the spine in the majority of patients.2 The exact etiology of ankylosing spondylitis remains unknown.3 Individuals with the HLA-B27 antigen have a 20 fold greater risk of developing spondyloarthritis.1 The male to female ratio of ankylosing spondylitis is 3:1.3 The axial skeletal manifestations of AS include sacro-ilitis, spondylitis, spondylodiscitis, and spondyloarthritis. Another major characteristic and pathognomonic sign of AS is new bone formation. Osteoproliferative processes occur often at previously inflamed areas and are detected by imaging techniques as syndesmophytes, calcification and ankylosis of spinal joints, enthesis and ligaments.2

Case 1:
A 27 year old male patient was referred for MRI of the lumbar spine after complaints of low back pain with numbness in both legs and feet for three years. There was no known history of trauma. On examination he was tender at lower back and S.I joints. His laboratory investigations showed raised ESR which was 76mm. HLA-B27 was not done.
Radiograph of lumbar spine showed height reduction of intervertebral disc space, sclerosis of the end plates at L3-L4, erosion of the superior end plate of L4 and a syndesmophyte at L3.
An MRI lumbar spine was done which showed abnormal signal intensity along the end plates of L3 and L4 vertebra with desiccation of intervening disc. Signal intensity was hypointense on T1-and hyperintense on T2 and fat saturation sequences. After administration of intravenous Gadolinium, these showed enhancement, as seen in Figure-1. 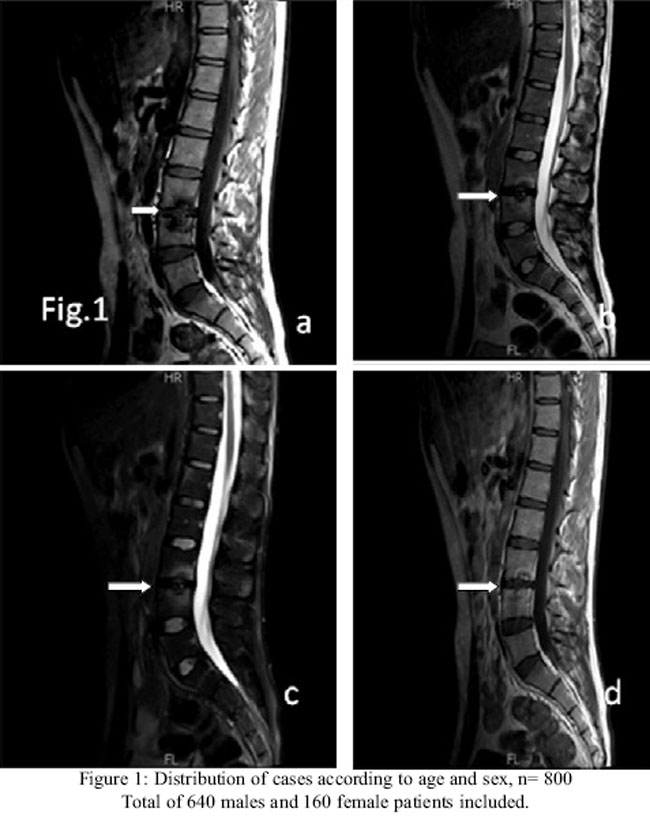 There was no evidence of epidural, prevertebral and paravertebral component. Based on these findings the diagnosis of Ankylosing Spondylitis (Andersson lesion) was suggested.
Case 2:
A 42 years old male patient presented with insidious onset of low backache. On laboratory investigation his ESR was 62 mm 1st hour. HLA-B27 was not done. A radiograph of the dorso-lumbar spine showed syndesmophytes from D10 through L5.
He underwent MRI lumbar spine, which showed thickening of anterior longitudinal ligament. Healed Romanus lesion (Corner Sign) was seen at D10, D11, L4 and L5 vertebra as shown in Figure-2 a,b. 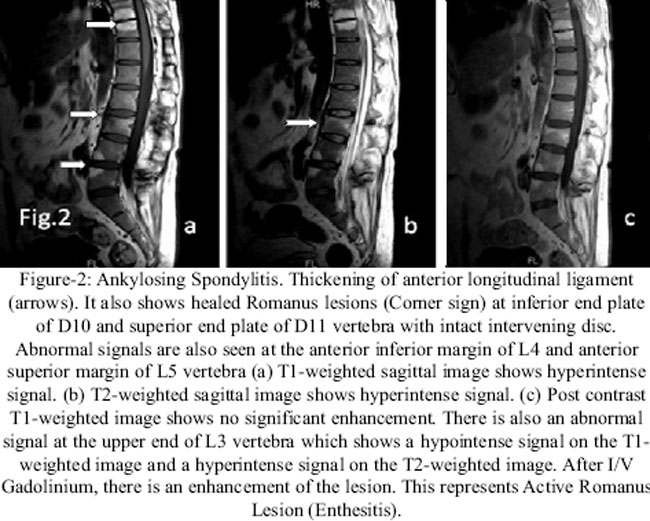 Active Romanus lesion (enthesitis) at L3 vertebra. There was also contrast enhancement at this lesion as seen in Figure-2 a,b,c. Based on these findings, a most probable diagnosis of Spondyloarthropathy most likely Ankylosing Spondylitis was suggested.
Case 3:
A 68 years old male patient known case of carcinoma of prostate gland presented with pain in sacral spine radiating into the thighs posteriorly. Subsequently, he developed progressive stiffness of back and neck. He complained of totally stiff lumbar spine and severe pain with restricted movements of neck. He also complained of occasional pain in the left scapular region and thoracic spine. His laboratory investigation showed ESR of 91 one sentence. Once again HLA-B27 was not done.
Radiograph of the dorso-lumbar spine showed squaring of vertebral bodies, loss of intervertebral disc spaces, syndesmophyte formation and complete fusion with bamboo spine. Complete fusion of sacro-iliac joints was also seen.
He underwent MRI lumbar spine which showed loss of intervening disc spaces in the dorso-lumbar spine with squaring of vertebral bodies as seen in Figure-3. 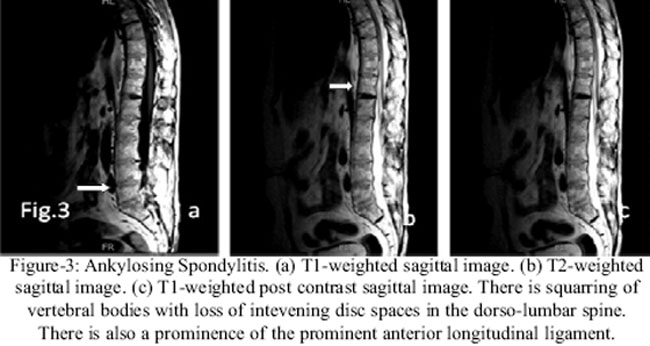 There was also a prominence in the prominent anterior longitudinal ligament. These findings are suggestive of Ankylosing Spondylitis.

MR imaging protocol useful for evaluating the spinal column comprises of a sagittal T1-weighted turbo spin-echo sequence and a sagittal short inversion time and recovery (STIR) sequence. When a contrast medium is given, images should be acquired with a fat-suppressed, T1 -weighted turbo spin-echo sequence.1
Focal destructive areas along the anterior margin of the disco-vertebral junction at the superior and inferior portion of a vertebral body are early and significant features of AS and have been termed "Romanus lesions."4 This was seen in our case 2. MR imaging allows for the detection of Romanus lesions in both early and late spondyloarthritis. In active disease, these lesions are depicted as a reduction in signal intensity of the rim of the end plate on T1-weighted MR images and as an increase in signal intensity on STIR images and represents bone marrow oedema or osteitis.5 MRI of thoraco-lumbar spine has been proven to be superior to radiography for depicting Romanus lesions.4
In a study done by Na Ra Kim in 2008, MR corner lesions were significantly more common in Ankylosing Spondylitis. The sensitivity, specificity, and positive and negative predictive values of the MR corner sign were 44%, 96%, 92% and 63%, respectively.4
Inflammatory involvement of the intervertebral discs by spondyloarthritis is known as spondylodiscitis or Andersson lesion. Such lesions were seen in our case-1. Rheumatic spondylodiscitis is a non-infectious condition that occurs in about 8% of patients with ankylosing spondylitis as detected on radiography.6 The radiological features of all types of Andersson lesion including disc space narrowing, destruction of vertebral end plate and sclerosis of adjacent bone. The significance of Andersson lesion is that it occurs frequently in AS of longer duration and mimics infection.7 On MR imaging, these lesions are depicted as disc related signal intensity abnormalities of one or both vertebral halves of disco-vertebral unit; they appear hyperintense on STIR images and hypointense on T1-weighted images, where they are often hemispherically shaped.1 The non-inflammatory lesion corresponds to an insufficiency fracture in an ankylosed spine.8 Insufficiency fracture occurs at the level of the disc (transdiscal) or at the level of the vertebral body (transvertebral). Older insufficiency fractures appear hyperintense on T1-weighted images, whereas fresh fractures have a low signal intensity.
Another case study done by William Davenport, stated that in patients with chronic AS with long standing back pain, infection must also be included in the differential diagnosis. MRI can be useful in distinguishing pseudoarthrosis from infection. In infection, MR imaging shows contrast enhancement in the adjacent discs and soft tissues, while pseudoarthrosis does not demonstrate an increase in enhancement of the involved discs.9
The radiographic features of disc space narrowing, destruction of the vertebral end plate and sclerosis of adjacent bone mimic infective spondylitis, particularly that due to tuberculosis (Hicklin, 1986). CT and MRI help to distinguish Andersson lesions from infective spondylitis by demonstrating the absence of soft tissue swelling, paravertebral mass or displacement and loss of fat planes (De Ross et al, 1968).
The changes in spondyloarthritis of the vertebral column as seen on MRI images are summarized in Table.
Arthritis of the zygapophyseal joints (facet joints), costo-vertebral joints and costo-transverse joints is characterized by joint effusion, synovitis, erosions and bone marrow edema.1
Involvement of ligaments in spondyloarthritis is most prominently seen when the interspinal ligaments and the supraspinal ligaments are affected. Ligamentous involvement is characterized by increased signal intensity on either STIR images or contrast enhanced T1-weighted fat saturated images.1
The syndesmophytes typically associated with AS are seen as bony outgrowths of the anterior vertebral edges. MR imaging has its role in depicting florid anterior spondylitis, which is the stage preceding the development of syndesmophytes.1
Ankylosis involves the vertebral edges or centre with bony extension through the disc. Vertebral ankylosis is clearly depicted by both conventional radiography and MR imaging.
Hence MRI shows different imaging features of AS depending upon the location and extent of the disease process. Familiarity with these features helps in diagnosing Ankylosing Spondylitis and in reaching the correct diagnosis as seen in our case series.
The clinical criteria used to make the final diagnosis was Modified NewYork criteria. According to this criteria, definite AS is present if the radiologic criterion is present in addition to atleast one clinical criterion. In our cases, two patients had low back pain for more than 3 months which improved by exercise but was not relieved by rest. In one patient there was limitation of lumbar spine motion.
Complications of AS are spinal fractures, cranio-cervical instability, pseudoarthrosis and cauda equina syndrome. Treatment options available are non-steroidal anti-inflammatory drugs to ameliorate spinal pain10 and intensive physical therapy plays a major role in maintaining spinal mobility.