Gender difference in age at onset of Schizophrenia: a cross sectional study from Pakistan

Schizophrenia is a severe psychiatric disorder associated with a chronic disabling course and high social and financial burden. Differences in clinical characteristics and outcome of schizophrenia in the developing world have been robustly demonstrated from those in the developed world. A follow up at 5 years of patients initially recruited for the World Health Organization (WHO) International Pilot Study for Schizophrenia found that clinical and social outcomes were significantly better in the developing countries.1 It may be speculated that this actually reflects a difference in etiology of the disease.
An earlier onset of schizophrenia in men has been widely reported. The ABC Schizophrenia Study, a large scale epidemiology project, reported a 3-4 years higher age at onset in women.2 However, reports from South Asia have failed to replicate this finding. Murthy et al. studied a sample of 200 schizophrenics and found no difference in age at onset between males and females.3 In another study in the Indian population, a higher age at onset in males was reported.4 An earlier prospective study in the Pakistani population carried out among hospitalized patients, found no significant difference in age at onset across gender.5 However a point estimate, alone, cannot refute this established finding, described since the inception of disease entity. Findings from earlier study could have been an artifact of small sample of patients, compromising the results of the study. This could also be a bias of early help seeking. This warrants a detailed and unbiased inquiry in to the age at onset of schizophrenia. It is important to note that age at onset of disease has been defined variably across studies. Earlier studies used first contact with healthcare and index hospitalization as an indicator of onset of disease while recent studies have used onset of gross psychotic symptoms.2,4 In both the situations age and gender are ideal design variables. They are simple and easy to obtain, are not influenced by any external factors, and should they be causally associated with schizophrenia, the association would be unidirectional because, unlike many psychosocial variables, age and gender cannot be consequences of disease.
This study was designed to validate previous reports on the effect of gender on age at onset of schizophrenia in the Pakistani population.

For this retrospective study, medical records of 252 patients who attended inpatient and/or outpatient services at a tertiary care hospital in Karachi, Pakistan between 2002 and 2008 were reviewed. Diagnosis was based on an interview by consultant psychiatrists. At the time of initial intake, every patient was interviewed in detail by a consultant psychiatrist. Collateral information is collected from the attendants. Documentary evidence of past contact with health care providers, prescriptions and case notes were reviewed when they were available. Diagnosis was based on International classification of Disease version 10 (ICD-10).6 Information was recorded in a seven digit confidential file. Medical record indexing warrants that every patient, receiving treatment, should have a diagnosis. In cases where clear diagnosis could not be established, individual case was presented in a clinical care meeting. This was attended by all the consultant psychiatrists, within the department of Psychiatry. Initially information related to the case was presented, which was followed by a patient interview. This helped in arriving at a conclusive diagnosis.
Patients with schizoaffective disorder, substance-induced psychotic disorder, organic brain syndrome and acute psychotic disorder were excluded from the study.
A self designed questionnaire was used in order to review the clinical records. Key elements included socio-demographic details including age at presentation, gender, marital status, level of education and occupation. Age at onset was defined operationally as age at onset of psychotic symptoms, age at first contact with a health care provider and age at first hospitalization. Age at first psychotic symptoms was defined as the age when the patient\'s relatives or those in his or her environment first noted psychotic symptoms. For this definition, gross psychotic symptoms included hallucinations, delusions, gross over-activity, marked psychomotor retardation or catatonic behaviour. Age at first contact with a health care provider was defined as the age of the patient when a health care provider was first contacted to seek treatment for psychiatric or behavioural complaints. The type of health care provider first contacted was also recorded. Age at index hospitalization was defined as the age of the patient when he or she was first admitted in a psychiatric care ward.
Socio-demographic data and type of first psychiatric care providers were reported using descriptive statistics. Measures of age at onset of illness were compared across gender using t test. Data was entered and analyzed in the SPSS version 15.0. 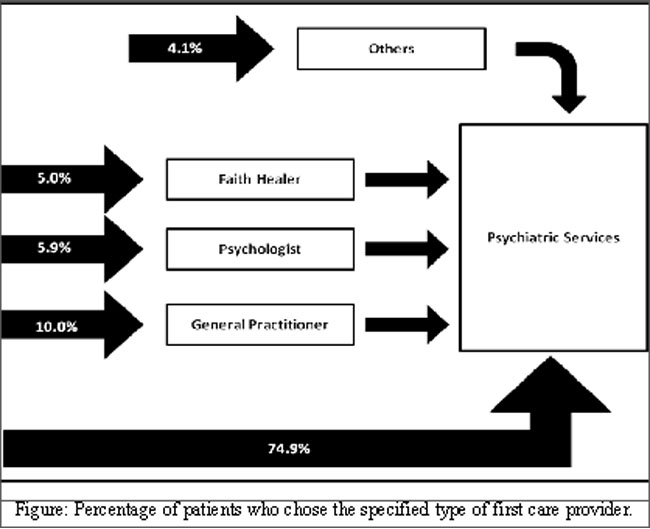 Table-2 summarizes the differences between ages at onset.
Most patients (74.9%) contacted a psychiatrist first after the onset of their symptoms, 10.0% went to a General Practitioner, 9.2% consulted other specialist doctors while 5.8% went to other caregivers including faith healers and alternative practitioners.

The main results of this study showed no significant difference in age at onset of schizophrenia among men and women. An earlier overall onset of schizophrenia in men than in women has been widely reported.2 However, the universality of this view was challenged by some reports from the South Asian population. Two hospital based studies covering an Indian population found no gender effect on age at onset of schizophrenia.3,4 Recently, a community based study was performed in South India emphasizing no significant difference in age at onset across gender.7 Similarly, an earlier study from Pakistan including 60 hospitalized patients reported no significant effect of gender on age at onset. 5
The results of this study demonstrate that the difference in age of onset across gender in the South Asian population is consistent with some of the previous studies conducted in the region. It has been suggested that estrogen plays a protective role in the pathophysiology of schizophrenia by its effect on neurodevelopment and neurotransmission and hence, pre-menopausal women have a delayed onset of the illness.8 However, in the developing countries the near equal sex ratio is approached differently and has been suggested to be attributable to lower illicit drug and oral contraceptive pill use in the region.9
There are certain limitations to this study. Considering its retrospective nature, it would be relevant to highlight the lack of reliability in information given regarding age at onset of symptoms of patients by household members. Also, the population served by this tertiary care hospital caters mostly to the upper, middle and lower-middle socio-economic strata and may not be representative of the Pakistani population at large.
Our findings agree with published reports that patients married at the time of presentation have a later onset of psychosis than those who are single.10
A majority of patients in our dataset approached a psychiatrist as the first point of contact for care while only 10% reported first to a general practitioner. This is in agreement with an earlier report on pathway to psychiatric care in the Pakistani population and reflects an understanding of the inadequacy of basic health care in dealing with mental illnesses.11

Knowledge about breastfeeding in accordance with the national policy among doctors, paramedics and mothers in baby-friendly hospitals