Objective: To determine the prevalence of smoking and awareness of tobacco related diseases among medical students.
Methodology: A survey of all medical students of Ziauddin Medicat University in the year 2000. The data was collected by a self-administered questionnaire.
Results: A total of 264 (92%) out of 288 students responded to the survey. Smoking was more prevalent among males (26%) as compared to female students (1.7%). The knowledge about tobacco related diseases regarding lung cancer and stroke was significantly higher among females, while knowledge about small for date babies was significantly higher in males.
Conclusion: Smoking prevalence was higher among male students of Ziauddin Medical University, a trend similar to other medical colleges. Further studies regarding risk factors of smoking will help us to better understand the complex etiology of smoking related disorders (JPMA 52:389, 2002).

The worldwide mortality from tobacco related diseases reached up to 4 million per year in 1998 and is expected to become 10 million per year in 2030. This is more than the total present deaths from tuberculosis, malaria, maternal and major childhood conditions combined1. Trends of smoking are changing in developed and developing countries. Although smoking is static or declining in most of the developed countries due to intense public health measures, it is increasing in the developing countries due to massive promotional activities of cigarette companies2,3. According to WHO, there were 800 million smokers in the developing countries in 1997 as compared to 300 million in the developed world4. These figures may not correctly reflect the actual proportion of smokers in developing and developed countries, due to different population sizes.
The prevalence of smoking is high in Pakistan, a trend similar to other developing countries4-6. It is estimated that 36% of men and 9% of women use some form of tobacco on a regular basis. The average age of onset for cigarette smoking in Pakistan is 18 years for males and 24 years for females7. Inspite of more knowledge about its harmful effects cigarette smoking is widespread among the medical students around the world8-12.
The aim of this study is to determine the prevalence of smoking as well as knowledge about tobacco related diseases among the students of Ziauddin Medical University Karachi.

There are a total of 288 students from first to final year of Ziauddin Medical University, of these 102 (3 5%) are male and 186 (65%) female. All of the medical students were targeted for the survey. A structured questionnaire consisting of three parts was developed for this purpose. The first part was about self-reported smoking status; those students who had smoked at least one cigarette daily during the last one month were classified as current smokers, those who smoked at least one cigarette per month but not daily were classified as occasional smokers. Those who stopped smoking but previously smoked at least one cigarette a day were classified as ex-smokers and those who never reported smoking were classified as non-smokers. The second part was related to age at start of smoking and number of cigarettes smoked per day. The third part was regarding knowledge of students about tobacco related diseases.
The questionnaire was self-administered, the students were not required to give any identification and were asked to deposit the completed forms in a ‘box’ placed in the room. This was done to ensure confidentiality and valid responses from the students.
The data was entered and analyzed by using Epi Info version 6. Chi-Square test was used to evaluate the difference regarding knowledge about tobacco related diseases at the significance level of a=05. 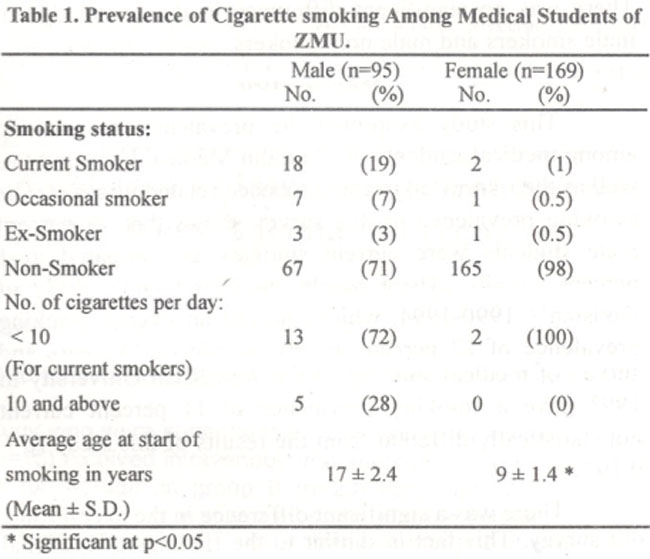 There was a significant difference in the average age of starting smoking between males (17 ± 2.4 years) and females (19 ± 1.4 years).
The knowledge of students regarding tobacco related diseases was found to be less than satisfactory (<75% correct response) for cancers of the throat and larynx, peptic ulcer, cerebrovascular diseases, stroke, preterm babies and male infertility (Table 2). 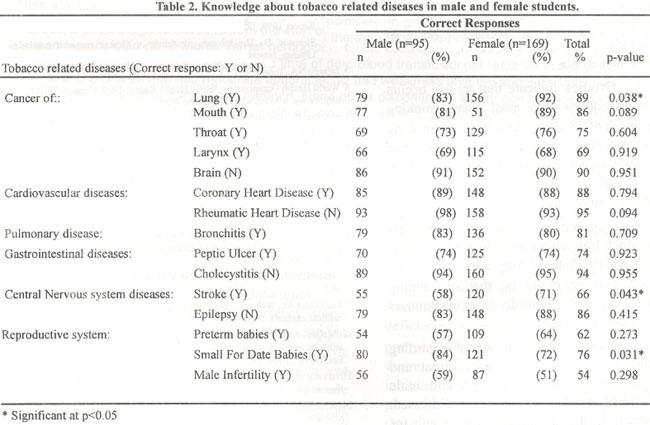 This study examined the prevalence of smoking among medical students of Ziauddin Medical University as well as their knowledge about tobacco related diseases. The smoking prevalence in this survey shows that 19 percent male students were current smokers as compared to 1 percent females. These results are significantly different (p<0.00l) from the findings of National Health Survey of Pakistan13 1990-1994, which showed an overall smoking prevalence of 22 percent among people of 15 years and above (36 percent of males and 9 percent of females). A survey of medical students of the Aga Khan University in 1993 gave a smoking prevalence of 11 percent current smokers (17% males and 4% females)8. These results are not statistically different from the results of this study (p=0.197).
There was a significant difference in the average age for starting of smoking among male and female smokers in our survey. This fact is similar to the findings of National Health Survey of Pakistan 1990-1994, in which average age of onset of smoking for males (18 years) is less than that of females (24 years)13. Only 3 female students reported as smokers in this survey, so the average age of onset of smoking among females may not be correctly estimated from such a small number.
Other studies also indicate that tobacco use occurs primarily in adolescence and most users start smoking before the age of 18 years14-17. Similar studies of smoking prevalence among Tnedical students of Karachi and college students of Peshawar have shown a prevalence rate of about 22 percent18,19. All these studies indicate trends of smoking similar to our survey findings.
Smoking prevalence surveys of medical students and doctors in Iran and China also show very low female smoking rates (0-1%), a trend very similar to our survey results20,21. The reason could be that smoking among females is not socially and culturally acceptable in countries like Pakistan, Iran and China.
The students’ deficiency in knowledge regarding tobacco related diseases such as cancers of throat and larynx, peptic ulcer, stroke, preterm babies and male infertility are important issues that must be addressed. There is need to increase awareness among the youth for other serious consequences of tobacco related diseases along with lung cancer and heart disease.
The smoking status is based on self-reporting by the students. This can result in under-reporting of smoking status, even though no identification was required. The majority of students in this study were females (64%) and almost all of them were non-smokers. So the comparison between smokers and non-smokers was restricted to the male students (n=95). The reported ‘no difference’ in knowledge between smokers and non-smokers in this study may be due to the relatively smaller sample size of 95 males.
The students of 1st and 2nd year will be followed up in their final year of studies at Ziauddin Medical University to record their smoking status. This will give an indication to whether there is some influence in medical colleges, which encourages or discourages smoking. This study extends previous knowledge about prevalence of smoking among medical students but more studies00 regarding risk factors of smoking will help us to better understand the complex etiology of smoking in medical students.

We would like to acknowledge the guidance of Professor N.A. Jafarey, Vice Chancellor, Ziauddin Medical University, during this research project and also to Professor S.N. Bazmi Inam for editing the manuscript.

Transitional Cell Carcinomas of the Urinary Bladder. A Histopathological Study

Seroprevalence of Hepatitis B, C and HIV in Blood Donors in Northern Pakistan