Leiomyosarcomas:Analysis of Clinical Presentations in 6 patients

Objective: To identify characteristic features of leiomyosarcomas in an attempt to diagnose them preoperatively.
Study Design:The 3 years experience with 6 patients with uterine leiomyosarcomas at Hayatabad Medical Complex, Peshawar was retrospectively reviewed.
Results: The mean age of occurrence was 50 years with abnormal uterine bleeding the commonest symptom. Leiomyosarcomas had no preferential uterine location and were of variable sizes. Only 1 case was diagnosed preoperatively.
Conclusion: We have observed that physical examination and imaging techniques are rarely helpful in establishing the diagnosis preoperatively. We recommend larger prospective studies to evaluate the efficacy of preoperative monitoring of enlarged uteri (JPMA 52:41 2; 2002).

Uterine leiomyosarcoma is an uncommon malignancy. The generally quoted incidence is 0.67 per 100,000 women aged >20 years1-3. It represents 1-1.3% of all uterine malignancies1,2,4-7 and about 5% of uterine sarcomas1,5,8. The incidence ratio between benign and malignant leiomyomas has been estimated to be 800:11,4,9. Because of the paucity of larger sized studies, these figures are neither well defined nor comparable.
The clinical presentations in uterine leiomyosarcomas resemble those of benign leiomyomas1,10 and mot commonly include uterine bleeding, pelvic pain and/or pelvic mass1,4,7,11. It is very difficult in most of the cases to diagnose a leiomyosarcoma preoperatively. This is true even if diagnostic imaging and endometrial sample have been performed preoperatively. Also frozen section is not always decisive intraoperatively1,10.
Thus the gynecologist is often presented with the initial evaluation and treatment of patients with uterine enlargements. This poses problem in two subsets of patients, younger women who wish to preserve fertility, perimenopausal women wishing to postpone definitive therapy thus - awaiting uterine shrinkage after menopause and some patients who do not wish to have a hysterectomy. This also includes patients who are treated preoperatively with gonadotrophin releasing harmone agonists for various reasons (to shrink myoma or to improve hemoglobin). Because of these uncertainties involving the preoperative diagnosis, appropriate surgical therapy may be delayed. And when a laparotomy is performed surgical staging and adequate treatment may be missed.
It was for these reasons that this study was undertaken. The main objective was to evaluate the clinical, radiological, pathological and surgical characteristics of leiomyosarcomas in an attempt to better understand their features and interpret the findings preoperatively.

A retrospective study was conducted at Gynae Department of Hayatabad Medical Complex, Peshawar. All the patients who had leiomyosarcomas or who were diagnosed retrospectively after histopathology of hysterectomy specimens in the last 3 years (October 1998 to July 2000) were reviewed.
All the diagnosis were reviewed in consultation with the Department of Pathology. Special attention was given to the number of mitosis per 10 high power fields, the degree of cellular atypia, the character of tumor margins presence of areas of hemorrhage and necrosis. The histological criteria used for diagnosis was similar to other studies, i.e. >10  mitosis per 10 high power fields1,3,10,12. Data was expressed in terms of mean. The range was also reported.

Six patients were identified to have leiomyosarcoma in the three years of study. All of these were included in the study. One of them had a hysterectomy 8 years back.
Mean age at diagnosis was 50 with a range of 35-70 years. Five of 6 patients were multiparas; one was unmarried. Presentation symptoms included vaginal bleeding (5 patients) of which 2 were post menopausal, pelvic mass (2 patients), pelvic pain (1 patient), 4 patients had two or more symptoms. Duration of symptoms ranged from 1 month to 1 year with a mean of 5.6 months. Uterine size at initial examination varied between 6 and 24 weeks. Pre-operative Assessment Ultrasonography was performed on all the patients. Three patients had normal sized uterus and no significant pathology in the adnexa. In one patient who had clinically enlarged uterus, ultrasound imaging reported multiple well cletineci mixed density masses ot variable sizes with evidence of necrosis/degeneration giving the impression of leiomyoma. In the second patient with an enlarged uterus ultrasound gave the findings of a 13cm multiloculated mass in right adnexa with appearances suggestive of ovarian neoplasm and an additional finding of free fluid in the pelvis. Leiomyoarcoma was diagnosed preoperatively only in one patient on the basis of diagnostic curettage.
Operative Findings
In one patient who was diagnosed preoperatively, total abdominal hysterectomy with bilateral salpingoopherectomy was done. Hysterectomy specimen showed the presence of an ulcerated polypoidal submucosal growth arising from the fundal area. There was no local or distant spread. Among the 5 patients in whom leiomyosarcoma was not diagnosed preoperatively, 2 had absolutely normal looking uteri and adnexa, cut sections also were inconclusive. In one patient who was potmenopausal the uterus was 20 weeks size and a growth was extending into the broad ligament. Endometrial malignancy was suspected intraoperatively.
In the other patient with the clinically enlarged uterus, operative findings revealed the presence of a friable mass at fundus of uterus with two suspected intramural leiomyomas of 6x8 cm size. One of the above patients underwent transabdominal hysterectomy and bilaeral salpingo-oophorectomy (TAH+BSO) and the other study. TAH+right salpingo-oophorectomy. The last patient in this study had hysterectomy 8 years back for irregular vaginal bleeding. Now she presented with the mass m the abdomen. Ultrasound revealed the presence of an ovarian parenchymal mass. Laparotomy showed a huge highly vascular irregular mass arising from the pelvis and extending upto the diaphram. Liver metastases were also present. Biopsy was taken from the mass which later showed leiomyosarcoma.
Pathological Finding
All except one patient were diagnosed to have leiomyosarcoma on the basis of histopathological fmdings. Leiomyosarcomas were actually noted to be located at various sites throughout the uteri, serosal (n=1), intramural (n=3), sub-mucosal (n=1). A mitotic count of 5-10 per 10 high power field was taken as diagnostic criteria.

The result of this study were comparable with those of pr vious studies describing patients with leiom) Osarcomas (Table)1,2,5,13,14 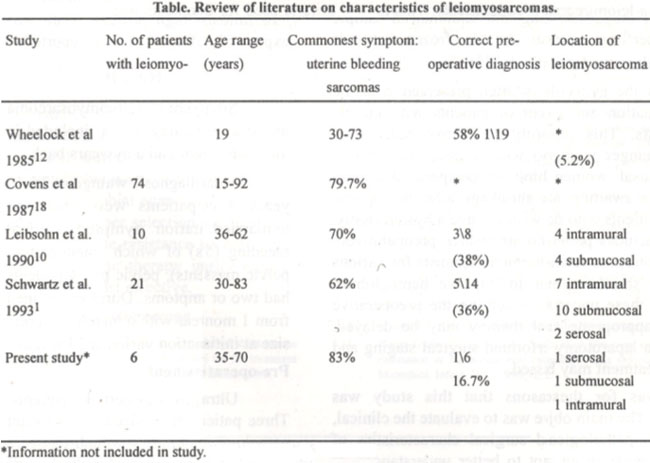 with regard to mean age of occurrence, common presenting complaint and preoperative diagnosis. The mean age was 50 years with abnormal vaginal bleeding being the commonest symptoms. The leiomyosarcoma was found to be located at virtually any uterine site1,9.
The preoperative diagnosis of leiomyosarcoma is only 1 (16.66%) in consistent with most other reports1,2,10,12,15 except Arrastia et al. who were able to diagnose 75% patients preoperatively16. Only one patient in this series was diagnosed preoperatively who had submucosal leiomyosarcoma. Although not all of our patients underwent diagnostic curettage or endometrial sampling before definitive surgery, but the literature supports the fact that this is not a highly reliable diagnostic test for this entity1,9. Schwartz et al.1 had 26 of 49 submucosal leiomyosarcomas, but in only 33% cases did endometrial sampling correctly diagnose this malignancy. Similarly preoperative physical examination did not give any clue to the diagnosis, seen in the presence of large sized uteri.
Although in one of our postmenopausal patients we had suspected the presence of endometrial carcinoma but not leiomyosarcoma. This may be because of the rarity of this clinical entity. Also the experience in this study suggests as others have noted that abdominal ultrasonography is not a helpful preoperative test for the diagnosis of leiomyosarcoma. Recently Doppler ultrasonography has been reported to show a characteristic tumor vacularity. Vaginal ultrasonography, with its increased resolution and magnetic resonance imaging are both promising in terms of providing more detailed structural patterns of leiomyosarcoma. These improving imaging modalities should focus on the dominant leiomyoma1,4.
The preoperative diagnosis of leiomyosarcoma is important. It avoids delay that might be involved in the management of patients with presumed leiomyomas. Plan for the proper surgical procedure is also influenced if laparotomy is performed with established diagnoses. Uterine adnexae may be involved sub-clinically and this observation may alter the plan for adnexal conservation in pre-menopausal women undergoing hysterectomy for presumed leiomyomas. Routine lymph node biopsy or lymphadenectomy is not recommended in cases of leiomyosarcoma, but if a preoperative diagnosis is at hand, careful retroperitoneal lymph node palpation and biopsy of suspect lymph nodes would seem worthwhile8,10,17. It also enables the clinician to search for the metastasis and to avoid more conservative procedures. as sub-total hysterectomy, myomectomy or preservation of adnexae.
In 67% of our patients the diagnosis of leiomyosarcoma was not made during surgery. One 35 year old patient had one of her adnexae conserved. To date 2 of our cases had recurrence of disease. In view of these observations one should be careful while conservatively managing a patient with enlarged uterus. The most common type of patients who are considered for conservative procedures are young women interested in retaining her fertility and women in their forties with symptomatic leiomyomas. In the later group of patients hysteroscopic endometrial ablation and gonadotrophin releasing harmone agonist therapy have been used for control of symptoms. It is perhaps for these clinical situations that our observation of misdiagnosis of leiomyosarcoma clinically and radiologically is most important10.
In conclusion, our report provides data on the clinical presentation of leiomyosarcomas. In spite of small number of cases in this study we have observed that physical examination and imaging techniques are rarely helpful in establishing the diagnosis preoperatively.

Transitional Cell Carcinomas of the Urinary Bladder. A Histopathological Study