A 40 year old housewife presented with shortness of breath and pain in both legs on walking short distance. This all started nine years ago after the birth of her fourth child, which was a normal vaginal delivery, like the three previous ones. Post delivery she developed swelling of the right leg which was treated conservatively with heparin and elevation. The pain on walking varied in intensity but got worse over the last one year before presentation, in addition to breathlessness. She also noticed engorged veins in both groins, mons pubis and both legs. The legs ached at rest and got edematous by the evening. With these symptoms she presented to a general practitioner who referred her to hospital where a CT scan of the abdomen was performed and a diagnosis of absent IVC was made. For further management she was referred to the vascular unit.
On examination all pulses were normally present. Abdominal examination revealed stretch marks on the lower abdomen with engorged veins and reversed flow on anterior abdominal wall; liver was enlarged but non-tender. There were prominent veins on the mons pubis and both groins. Both legs were edematous with minimal varicosities. There was no incompetence of sapheno­femoral and sapheno-popliteal junction both clinically and on hand held Doppler. A venous duplex scan of both legs did not reveal deep venous thrombosis, deep or superficial venous incompetence. Venocavography revealed complete absence of IVC with azygous and hemiazygous continuation and collateral circulation between vertebral venous plexus and azygous system.

Normally the IVC is formed by the junction of the common iliac veins anterior to the fifth lumbar vertebral body, a little to its right2. It ascends cephalad to receive blood from the renal and hepatic veins and having passed through the diaphragm to empty into the right atrium. The azygous vein a posterior thoracic structure that lies to the right of the spine and empties into the superior vena cava, normally receives blood from the right ascending lumbar and lower right intercostal veins. Similarly the hemiazygous vein ascends to the left of the spinal column and receive blood from the left lumbar, the left renal and fourth through seventh intercostal veins3. In lower thorax both azygous and hemi-azygous veins course parallel to the descending aorta. At the level of eight thoracic vertebral body the hemi-azygous vein crosses the midline behind the aorta to drain into the azygous vein2.
Absence of the intrahepatic segment of IVC with azygous continuation occurs in 0.6% of patients investigated for congenital heart disease4 and frequently coincides with situs inversus, asplenia, or polysplenism, persistent left superior vena cava and congenital pulmonary venolobar syndrome. More recently, absent IVC has also been recognized as a solitary, incidental finding in patients without symptoms5. In addition to our patient, at least four other reports have been published of absence of the infrarenal IVC along with the suprarenal segment6. It is interesting that none of these patients has had the usual associated congenital anomalies in addition to this finding. It has been suggested that this finding could represent an acquired defect caused by perinatal renal vein thrombosis7 although most researchers believe embryologic dysgenesis is the cause8
Color flow duplex scan of the legs in our patient was neither suggestive of venous obstruction nor of venous incompetence, which reinforces the role of ascending venography in this condition. Absence of the IVC may be diagnosed by chest radiography, which will often show a paraspinous shadow adjoining the right hemidiaphragm but our patient had a normal chest X-ray. The increased recognition of this anomaly corresponds to the prevalent use of computed tomography, which is the single best study to diagnose this anomaly. Our patient was also diagnosed on CT Scanning [Figure 1(a),1(b)] 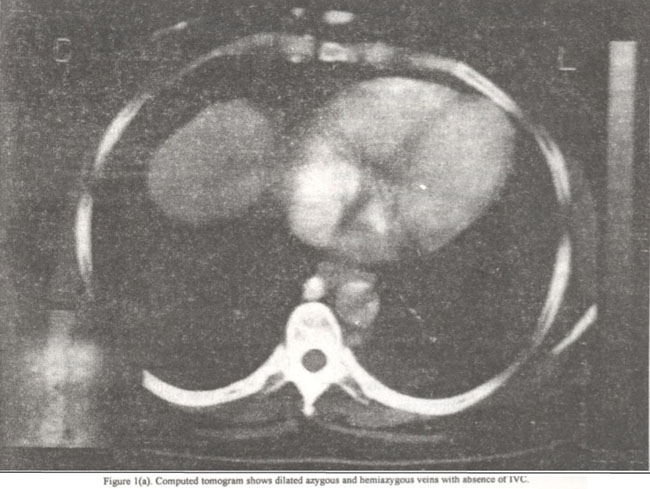 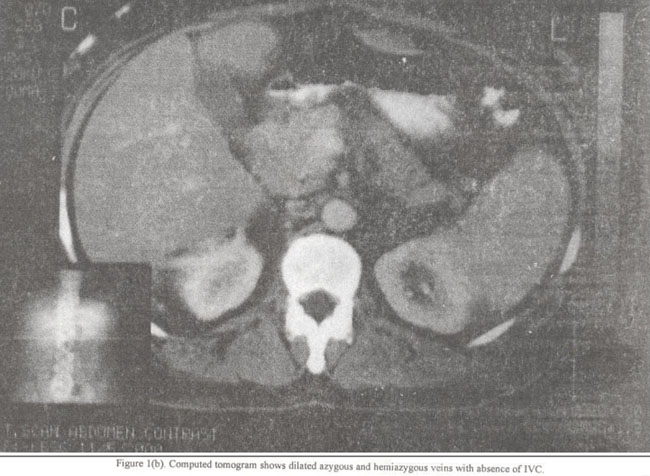 but venocavography showed its complete absence with azygous and hemiazygous continuation and collateral circulation between the vertebral venous plexus and azygous system (Figures 2, 3 and 4). 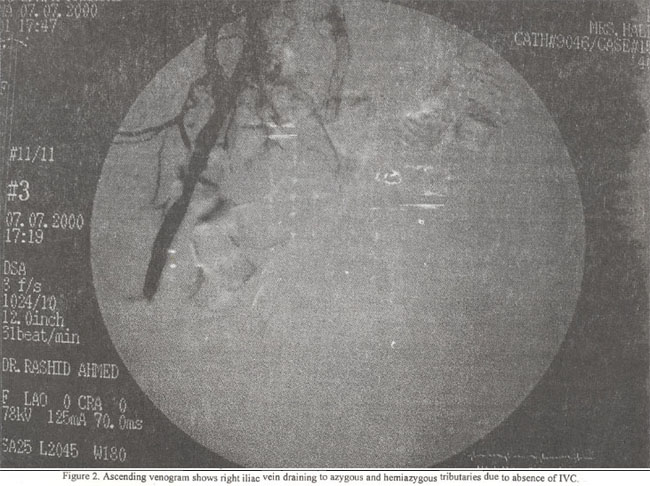 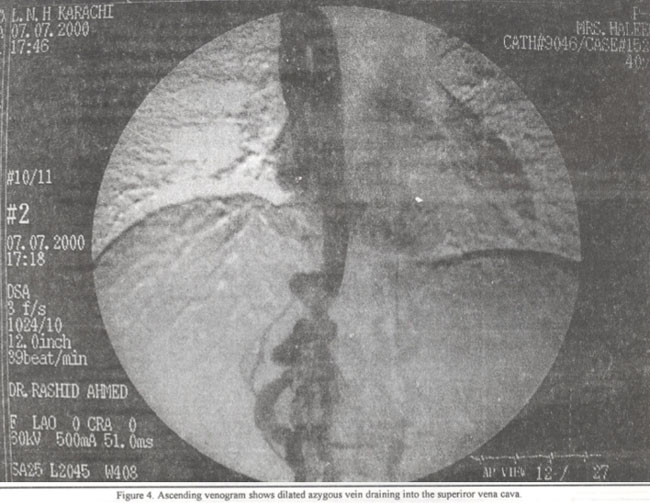 Management of such patients is difficult. The options available are conservative treatment or venous bypass. Extra anatomical venous bypass using a prosthetic graft has been reported in a patient with severe symptoms of venous hypertension of the legs with ulcers of the gaiter area and impending amputations9 but long term results of such a procedure is not known. Our patient had venous hypertension with venous claudication but fortunately did not have any tissue loss. We treated her conservatively with class III graduated compressions stockings and 300mg of Aspirin daily. Had she had tissue loss we would have considered a bypass procedure, as that would have been her only chance to avoid amputation. One year on follow up patient is managing well on conservative treatment.

Histiocytosis X of the Vulva