Objective: Conversion disorder presents differently in various cultures. The commonest symptoms in the Asian subcontinent may be very different from those seen in Western Hemisphere. This causes some difficulty in making a diagnosis while using DSM-lV and lCD-10 0.
Method: This study searched inpatient records for the last 10 years at the Aga Khan University and collected some demographic data as well as assessed the phenomenology of conversion disorder in the patient population.
Results: We found unresponsiveness to be the most common symptom in this sample thus not exactly fitting the DSM-lV/ICD-10 picture.
Conclusion: We observed that current criteria of conversion disorder as stated in two major classification in Pakistan and other parts of subcontinent (JPMA systems are not totally relevant to the clinical pratice 51:143:2001).

Defining “Hysteria’ or “Conversion Disorder” has been a difficult task throughout the last one hundred years. It has been a diagnosis by exclusion and a diagnosis difficult to defend due to its varying presentation01. Back in 1960s psychiatrists were convinced that there is a definite disease entity which mimicked physical illness but had no demonstrable organic cause. One finds the term “Hysteria” or “Conversion H lysteria” used in the above context as well as when an organic cause was present but the disability was out of proportion.1 Also multiple meanings and dimensions have been assigned to this diagnosis which varies from conversion hysteria closest to DSM tV/lCD 10 conversion disorder to dissociative states which no longer belong to the category of Conversion/Hysteria, hysterical personality renamed as histrionic personality: Briquet’ s Syndrome/somatization disorder again no longer classified as conversion or hysteria. Then there were certain other less well defined terms such as anxiety hysteria, mass hysteria and sometimes loosely applied “hysteric” label for patients who are manipulative2. Some authors have attemped to make a distinction between “Conversion reaction”- a syndrome mimicking a neurological condition and hysteria applied exclusively to What we know as somatization disorder3 or Briquet Syndrome. All this creates difficulty in diagnosing “Conversion” by using a set criteria. The presentation of the disease and its phenomenotogy in the West has also gone through a transition with diagnostic criteria becoming more rigid thus resulting in exclusion of several cases and their assigning to “culture bound syndromes”3.
Another observation is that conversion disorder presents differently in different cultures. The commonest symptoms among the patient population in Pakistan may be
extremely rare in Western Hemisphere4-6. It is also noted that current DSM-lV and ICD-10 criteria for conversion have some limitation when one tries to conceptualize the nosology and computerized record search was done. Data included socio­demographics, conversion sysmtoms, concurrent diagnosis, length of stay and follow up. SPSS 8.0 was used to analyze the data. 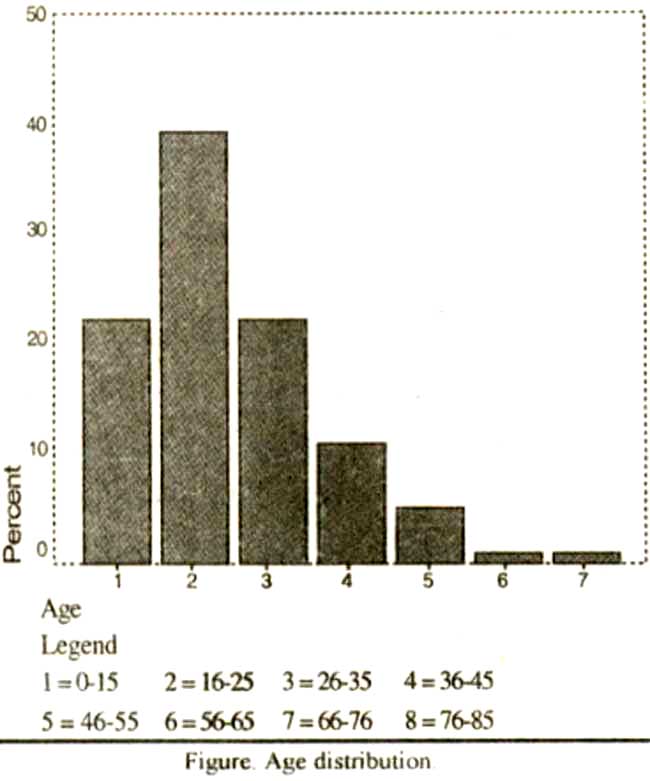 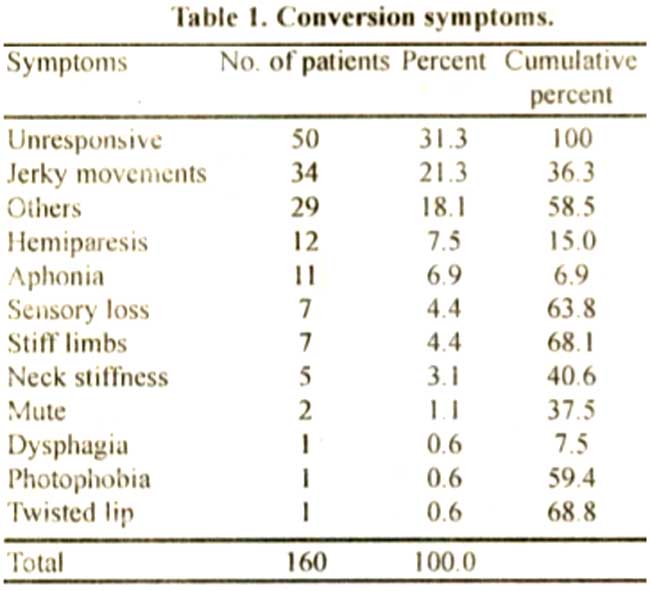 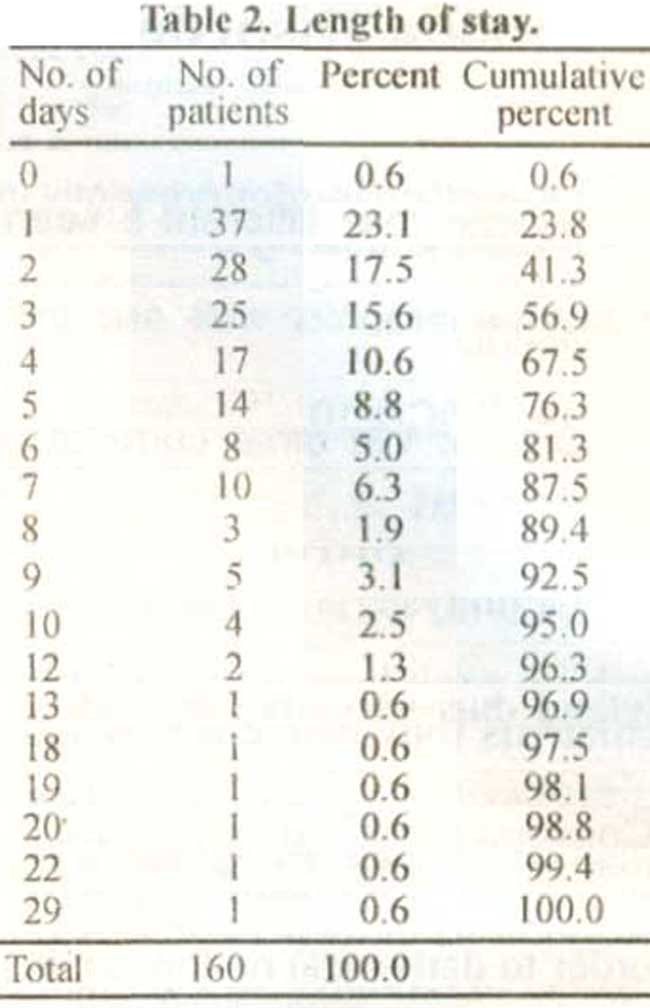 and 53.1% (n=85) carried a concurrent medical diagnosis with no additional psychiatric diagnosis other than conversion disorder (Table 3). 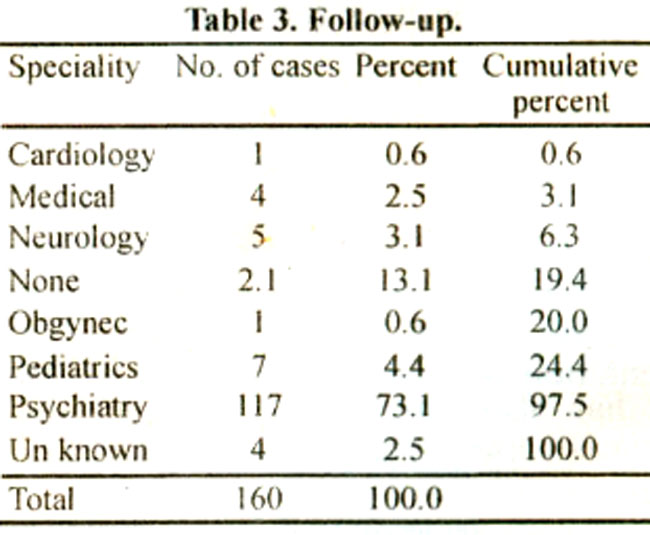 The most frequent psychiatric diagnosis was major depression (10%) in sixteen patients.

After analysis of our results we found that unresponsiveness was the commonest symptom of conversion with jerky body movements (pseudo-seizures) as the next common symptom. When put together the symptoms constitute the majority of our patients (53%). This is supported by earlier studies done in India4,7.
In DSM-lV conversion disorder is categorized under somatoform disorders and it involves unexplained symptoms or deficits affecting voluntary motor or sensory function that suggest a neurological or general medical condition3. Unresponsiveness and loss or alteration of consciousness is only mentioned under culture specific features, indicating the low incidence of these particular symptoms in North America and other developed countries8. This raises the issue that current nosology used in DSM-IV and ICD-10 does not completely cover all aspects of this illness as it presents in our part of the world. Perhaps a separate category within the framework of conversion disorder needs to be introduced otherwise majority of our patients with conversion would remain uncategorized due to atypicality of presentation. In their study Alexander, Joseph and Das4 have suggested, as previously mentioned in this article, a separate category BDS (Brief Dissociative Stupor) which resembles closely our conversion patients with unresponsiveness. They have put the duration to be limited to a few hours. Another term that may apply to our sample is dissociative stupor7 which does not put any time limit to the disorder. We need to re-examine the criteria used in DSM-IV and ICD-10 for their utility in diagnosing conversion disorder in our culture since most of our patients would not fit in any of the sub-categories of conversion. As this study and others4,5,7 have suggested that greatest number of our patients with so called conversion symptoms can actually fit into the Dissociative disorder not otherwise specified category3. This renders the current classification systems inadequate. Perhaps adding a sub-category such as Conversion disorder with unresponsiveness within the rubric of conversion disorder might be more appropriate and would make the classification systems more relevant to our clinical experience.

Pericardial Effusion as a Cause of Morbidity in Patients on Maintenance Hemodialysis: Is it Preventable?

Behind the Counter: Pharmacies and Dispensing Patterns of Pharmacy Attendants in Karachi