Objective: To see in a large series of patients the histological pattern of CNS neoplasms and to provide a comprehensive data about the frequency of CNS neoplasms in Pakistani patients and to give a clearer idea about their prevalence.
Method: Retrospective study of all consecutive cases of CNS neoplasms diagnosed at The Aga Khan University Hospital (AKUH) between 1st January 1994 and 31st December, 1999.
Setting: The section of Histopathology, AKUH, Karachi.
Observation: Our series included a large number of cases i.e., 1110 . There are very few local studies on CNS tumours and none so large . Our data was correlated with published Western and Pakistani data . Glial tumours were the commonest primary CNS neoplasms followed by meningiomas . Among glial tumours , astrocytomas comprised the largest group and the majority were high grade (Ill and IV ) astrocytomas. Percentages of anaplastic oligodendrogliomas and ependymomas were also significant. Male to female ratio was 1.6:1.
However, meningiomas were more common in females. Almost half of the CNS tumours in patients 15 years or younger were in the posterior cranial fossa . Metastatic tumours were much lower as compared to the West.
Conclusion: Except for the high percentages of anaplastic oligodendrogliomas and ependymomas and the low percentage of metastatic tumours, most of our findings roughly correspond with the published data (JPMA: 1 54;2001).

No significant data on the frequency of various types of central nervous system neoplasms in Pakistan is available apart from two studies by Irfan and Qureshi1 and Shah et al2. We have observed in our practice in the Section of Histopathology, AKUH that CNS tumours are quite common in all age groups. A retrospective study was therefore carried out to determine the histological pattern of all CNS neoplasms diagnosed in our section over a six-year period and to correlate our findings with international and Pakistani published data.
The annual incidence of CNS tumours ranges according to published Western data from 10 to 17/100,000 persons for intracranial tumours and I to 2/100,000 persons for intraspinal tumours; about half are primary tumours and the rest are metastatic3,4.Tumours of the CNS account for 20% of all cancers of childhood5. Malignant CNS tumours are the second commonest cause of death from cancer in the under 15 year age group in both males and females6. Seventy Percent of childhood CNS tumours arise in the posterior cranial fossa while a similar percentage of adult CNS turnours arise within the cerebral hemispheres supratentorially7. In general, gliomas account for 40-67% and meningiomas for 9-27% of primary tumours in population based studies8. Approximately 80% of brain metastases are found in the cerebrum and 10-15% in the cerebellum9. With modern neuron imaging techniques like CT and MRI and more careful autopsy studies of cancer patients, it is becoming clearer that brain metastases as a group are actually the most common intracranial tumours and slightly outnumber primary brain turnours in the populatio10.

A retrospective study was conducted in the Section of Histopathology, AKUH to determine the frequency of all CNS neoplasms diagnosed here from 1st January, 1994 to 31st December, 1999. During this six year period, a total of 1110 CNS neoplasms were diagnosed. All specimens were fixed in 10% buffered formalin. routinely processed under standardised conditions for paraffin embedding, sectioned and finally stained with haematoxylin and eosin using standard procedures.
When required, special stains such as PAS, reticulin etc. and immunoh istochem istry by Papan icou Iaeu tech n ique using monoclonal antibodies against GFAP, EMA, Cytokeratins, LCA, Pan B and T etc were performed. The histological characterisation of CNS turnours was done according to the WHO histological typing of tumours of the CNS7. The grading of astrocytic neoplasms was done according to the Kernohan grading systems for astrocytomas11. 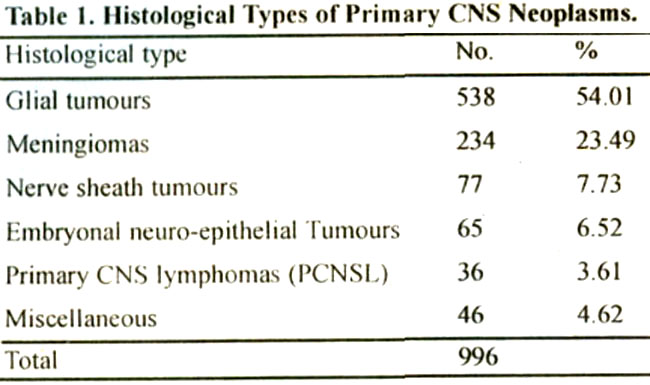 Among the glial tumours, astrocytomas were the commonest comprising of 384 cases or 71.37% of aH glial tunlours (Table 2). 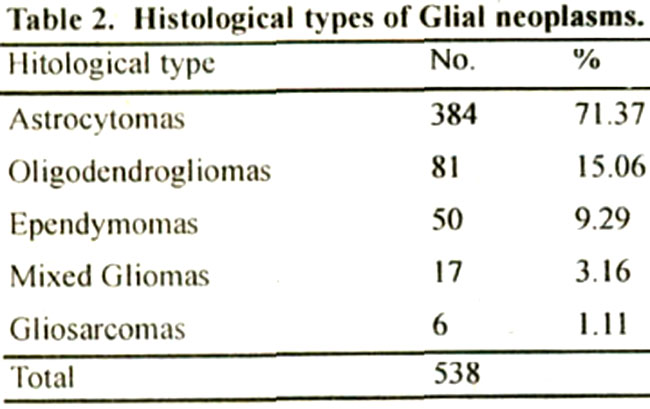 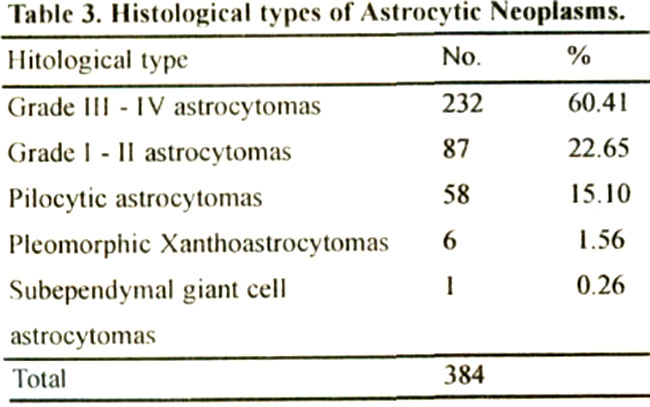 As shown in Table 1, meningiomas were the second largest category of primary CNS neoplasms comprising 234 cases (23.49%). The overwhelming majority of meningiomas were benign. However, there were 5 atypical and 9 malignant meningiomas. Nerve sheath tumours constituted the third largest category of primary CNS tumours with 77 cases (7.73%). Of these, 74(96.10%) were benign schwannomas, while 3 (3.89%) were neurofibromas. Five of the 74 schwannomas were ancient, one case was diagnosed as malignant peripheral nerve sheath tumour (malignant schwannoma). Embryonal neuroepithelial tumours constituted the fourth largest category of primary CNS tumours with 65 cases (6.52%). These 65 cases included 46(70.76%) medulloblastomas, 12 (18.46%) neuroblastomas and 7(10.76%) peripheral neuroectodermal tumours . Two of the 46 medulloblastomas were desmoplastic. CNS lymphomas were the fifth major category with 36 cases (3.6 1% of primary CNS neoplasms). All were diffuse non- Hodgkins Lymphomas (NHLs) of B cell phenotype.
Uncommon tumours were grouped together as miscellaneous and together comprised 46 cases (4.62 of all primary CNS tumours) (Table 4). 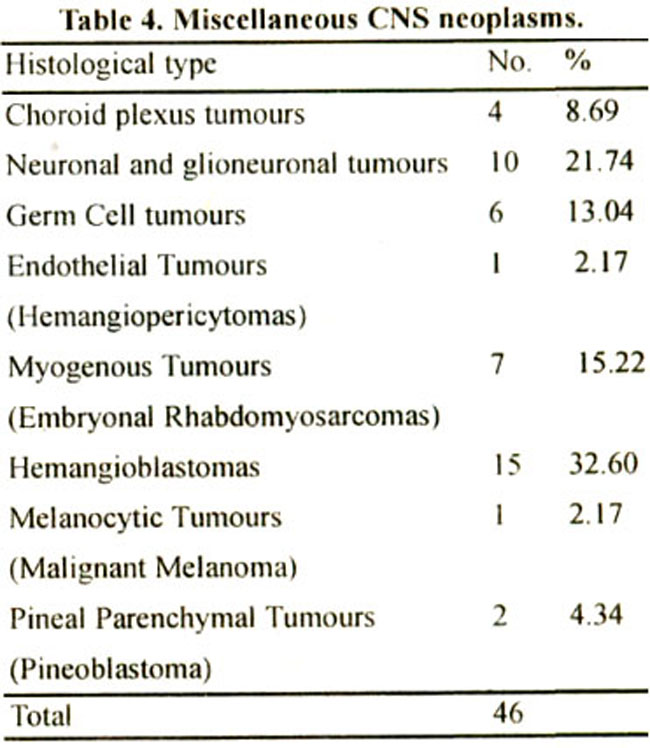 Little significant data regarding the prevalence or incidence of CNS neoplasms in Pakistan is available and there are very few studies on the frequency of various histologic types of CNS neoplasms. According to initial results from the Karachi Cancer Registry12, CNS neoplasms ranked at No. 14 among all malignant tumours in both sexes: while in another local study13, they ranked ninth among all malignant tumours in males. In both these local studies, CNS neoplasms failed to make the top ten malignant neoplasms in females.
The study by Irfan and Qureshi1 was the only significant local data on various histological types of intracranial space occupying lesions. But they included pituitary neoplasms as well as non-neoplastic conditions like tuberculosis. The study by Shah et al2 looked only at paediatric intracranial neoplasms. Our study looked at purely neoplastic CNS lesions in all age groups. However, pituitary neoplasm s like adenomas and cran iopharyngiom as were excluded. We also excluded all non-neoplastic lesions including various types of non-neoplastic cysts, vascular malformations, tuberculous and fungal infections etc.
Glial tumours constituted the commonest neoplasms in our series comprising 54.01% of all primary CNS neoplasms, followed by meningiomas which comprised 23.49% (Table 1). These findings are similar to published Western data according to which gliomas account for 40-67% and meningiomas for 9-27% of primary CNS tumours8. In Irfan and Qureshi’s study1, gliomas accounted for 32.1% and meningiomas for 13.7%. However, as mentioned above, this study included pituitary tumours as well as non-neoplastic conditions. Nerve sheath tumours accounted for 7.73% of all primary CNS neoplasms in our study (Table 1), whereas they comprised 5.4% in the above study. Embryonal neuroepithelial tumours comprised 6.52% of all primary neoplasms in our study (Table 1), whereas they comprised 6.2% in Irfan and Qureshi’s Series1. Among the glial tumours, astrocytomas were the largest group in our study comprising 71 .37% of all glial tumours. There were 301 diffuse fibrillary astrocytomas (grades I-IV) which comprise 30.22% of all primary CNS neoplasms. This makes them the commonest primary CNS neoplasms. Western data supports this14. These were followed by oligodendrogliomas comprising 15.06% and ependymomas 9.29% (Table 2). As mentioned in results, 32.09% oligodendrogliornas and 26% ependymornas were anaplastic. This constitutes a significantly high percentage of anaplastic lesions. Due to this high percentage, each case so diagnosed was reviewed critically by the senior pathologist in the study (S.H. Hasan). The presence of the following criteria was considered essential for a diagnosis of anaplastic oligodendroglioma or ependymoma: dense cellularity, conspicuous mitotic activity, endothelial hyperplasia and foci of coagulative necrosis. According to Irfan and Qureshi’s study1, astrocytomas comprise around 80% and oligodendrogliomas 8.8% of all glial tumours. In our study, high-grade (III and IV) astrocytomas were predominant over low-grade (I and II) astrocytomas comprising 55.73% of the astrocytornas (Table 3). But in Irfan and Qureshi’s study1, low grade astrocytomas (I % II) comprise 63.7% of all glial turnours . while glioblastomas comprise only 16.9% . NHLs comprised 3.61% of all primary CNS neoplasms in our series (Table 1), but there is no mention of lymphomas in Irfan and Qureshi’s study1.
In our study, the male to female ratio was 1.6: 1 (see results). Most U.S. registries report a higher brain tumour rate in males than in females (average ratio 1.4)15. In Irfan and Qureshi’s study’, SR was 2.
Western data also show that the sex ratio (SR) varies considerably by histologic type. Gliomas are higher in males (SR). while meningionlas are higher in females (SR 0.6)16. Our study shows similar findings. The SR was 2.0 for glial tumours, with males comprising 66.72% and females 33.27%: while SR was 0.7% for meningiomas, with males comprising 42.30% and females 57.69%. According to the SEER data for the interval 1973-80, in children less than age 15 years at diagnosis, 23% were medulloblastomas, 25% low grade astrocytomas. 12% cerebellar astrocytomas and 11% supratentorial astrocytornas17. According to a local study2, astrocytomas comprised 39%, followed by medulloblastomas 18.6% and ependymomas 13%. According to this same study, 43.5% of pediatric brain tumours were in the posterior fossa. In our study, 161 patients (14.50%) were 15 years or younger in age and in 49.6% patients 15 years or younger, the tumours were located in the posterior cranial fossa, which is similar to the findings shown in the study by Shah et al2. However, these figures are lower than the figures of 70% quoted in western data7.
The mean ages and age ranges of the major tumour types in our series (Table 5) correspond roughly with the published western data18.
According to Western studies10. metastatic tumours are the most common intracranial turnours and slightly outnumber primary brain tumours in the population. However, in our series, they comprise 10.27% of all CNS tumours. According to lrfan and Qureshi’s study’, they comprise only 3.4% of all CNS lesions. As mentioned above, this study also included pituitary tumours and non­neoplastic lesions. The discrepancy between western and local data concerning metastatic tumours to the CNS may be due to the fact that western data not only takes into account modern imaging techniques and biopsies but also autopsy studies. In our country, however, a large proportion of CNS tumours which are diagnosed as metastatic by imaging techniques are not sent for biopsy.
We hope that this large series which is, to the best of our knowledge the largest study from this country, will provide a comprehensive baseline data about the frequency of CNS neoplasms in Pakistan and give a clearer idea about their prevalence.
According to our study , Glial tumours constitute the commonest CNS neoplasms followed by Meningiomas Among the glial tumours, astrocytomas comprise the largest group, and high grade (III and IV ) astrocytomas are the predominant tumours among astrocytomas . The incidences of anap lastic ol igodendrogl iomas and ependymomas are significant as compared to other local and western studies.
Overall, CNS tumours are more common in males. However, meningiomas are more common in females. Almost half of all CNS tumours in patients 15 years or younger are in the posterior fossa . Metastatic tumours are much lower as compared to the west. However, this may be due to the fact that western data takes into account modern imaging techniques and biopsies as well as autopsy studies.

Pericardial Effusion as a Cause of Morbidity in Patients on Maintenance Hemodialysis: Is it Preventable?