Congenital afibrinogenaemia is a rare autosomal recessive disorder characterized by bleeding that varies from mild to severe and by complete absence or extremely low levels of plasma and platelet fibrinoge1. All screening tests based on end-point conversion of fibrinogen to fibrin are prolonged and all are corrected by the addition of normal plasma to the patients plasma2. The condition has
been reported in about 150 patients worldwide3. We report two families with congenital afibrinogenaemia, one with 5 out of 6 children being affected and the other with I out of 5 children having the disease.

Family 1
Four siblings, residents of rural area in District Jhang. 3 females aged 17, 12 and 10 years and 1 male aged 7 years presented with history of spontaneous mucosal bleeding in the form of repeated epistaxis and gum bleeding, prolonged bleeding after mild trauma and ecchymoses all over the body. The elder female patient complained of intractable menorrhagia. There was no history of joint or muscle bleeding. The parents had consanguineous marriage and were asymptomatic. One female child aged 14 years was unaffected. One female sibling had died of bleeding at the age of 6 years. There was no history of bleeding in the siblings of either parent. Blood counts revealed hypochromic microcytic anaemia with normal platelet count and erythrocyte sedimentation rate approaching zero. Bleeding time (BT) was prolonged beyond 15 minutes. prothrombin time (PT), activated partial thromboplastin time (APTT) and thrombin time (TT) were prolonged infinitely. All were corrected by addition of normal plasma. Fibrinogen was undetectable by functional assay and by turbidimetric method. No fibrinogen band was seen on plasma protein electrophoresis. The cases were diagnosed as cases of congenital afibrinogenaemia. Coagulation profile and fibrinogen values in the parents and unaffected siblings were normal (Table 1). 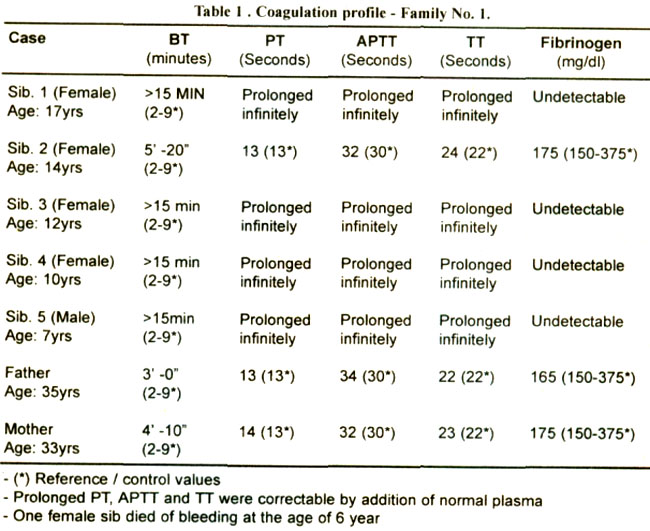 The fibrinogen values however, were in the lower limit of normal in all clinically unaffected members of the family.
Family 2
A 5 year old male child, resident of District Khanewal reported with history of prolonged bleeding after mild trauma, bleeding gums off and on and frequent ecchymotic spots over the body since birth. There was no history of joint or muscle bleed. Parents were first degree relatives. He had 4 sibilings. Two females, aged 14 years and 5 months: two males aged 9 years and 3 years. All others were healthy. There was no family history of any bleeding disorder. Blood counts revealed mild hypochromic microcytic anaemia with normal platelet count and ESR approaching zero. Bleeding time was prolonged beyond 15 minutes. PT, APTT and TT were prolonged infinitely. All were corrected by addition of normal plasma. Fibrinogen band was undetectable by functional assay and by turbidimetric method. No fibrinogen band was seen on plasma protein electrophoresis. The patient was diagnosed as a case of congenital afibrinogenaemia. Coagulation profile and fibrinogen values in the parents and unaffected sibilings were normal (Table 2). 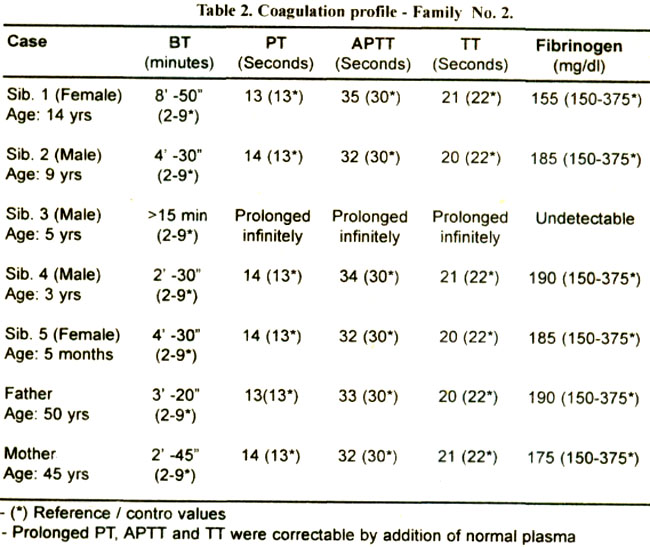 The patients, acute episode of bleeding was controlled by infusion of fresh frozen plasma (FFP), as no cryoprecipitate was available. 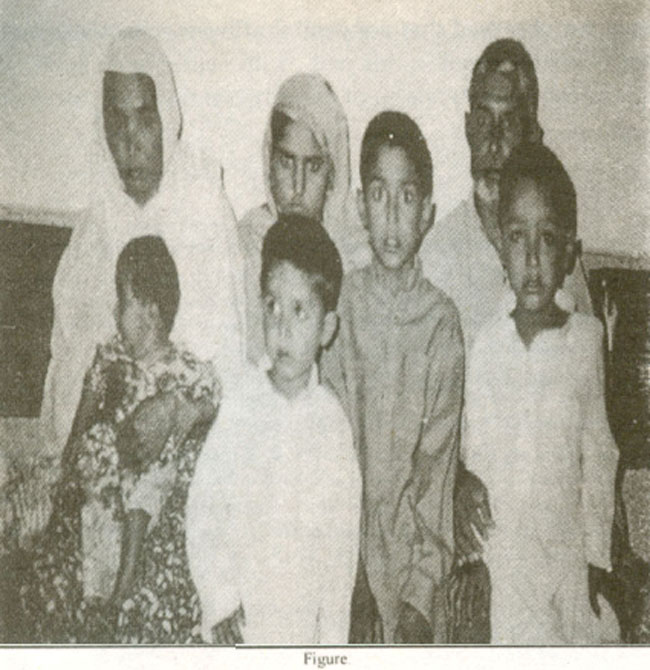 Congenital afibrinogenaemia was first described in 1920 and is a homozygous condition characterized by absent or near absent (less than 20mg/dI) fibrinogen by immunologic, chemical and functional assays2. The condition is transmitted by autosomal recessive trait as in our cases, but an alternate double hereditary pattern has also been described4. Like our cases consanguinity is common in the affected families. Male to Female ratio is 1:1. The condition is due to decreased synthesis of fibrinogen since survival of homologous fibrinogen in patient’s circulation is normal. The genetic defects of afibrinogenaemia are largely unknow except for recently reported3 deletion of 11kb of the fibrinogen alpha chain gene.
Clinical manifestation range from minimal bleeding to catastrophic haemorrhage6. There is increased bleeding tendency after mild trauma. Bleeding may be spontaneous and involve any organ system, but large ecchymoses and sudden gastrointestinal haernorrhage are particularly common2. All of our patients had ecchymoses, gum bleeding and epistaxis. One of the normal sibiling in second family had bleeding time in the upper normal range and fibrinogen levels of 155 mg/dl (normal range 150-375). Compared with hemophilia there is higher frequency of mucosal type bleeding but joint and muscle bleeding is less frequent than haemophilia7. Other symptoms described are sudden splenic rupture8, haemarthrosis, intracerebral haemorrhage2, and bilateral vertebral artery dissection9. Leg ulceration, necrosis of the toe and a life threatening haemorrhage following skin biopsy has been described10.
A rare association of afibrinogenaemia and concomitant deficiency of protein C has been described11,12. Its association with other congenital anomalies like hypobeta-lipoproteinaemia is also mentioned13. Menstrual bleeding is often excessive as was seen in one of our patients. Pregnancy outcome is poor2, however by utilizing replacement therapy successful pregnancies have been reported14.
Coagulation test which depends on clot formation as an endpoint may be infinitely proIonged6. like whole blood clotting time, prothrombin time, activated partial thromboplastin time, thrombin time and reptilase time. Fibrinogen is undetectable by chemical or functional measurements but trace amounts can be detected by sensitive immunoassay2. A prolonged bleeding time unrelated to platelet count is described in about one third of the cases. Interestingly all our patients had prolonged bleeding time which indicates that fibrinogen plays an important role in platelet aggregation and adhesiveness.
The treatment is indicated for acute bleed or to prevent haemorrhage during surgery. Long term prophylaxis is required in pregnancy and early childhood. The materials available are frozen plasma, cryoprecipitate and fibrinogen concentrates. Cryoprecipitate is the most practical source for fibrinogen replacement2, and bleeding episode can be effectively treated with it. Prophylactic cryoprecipitate every 7-10 days has been used successfully to prevent bleeding in early childhood.
Purified virally inactivated fibrinogen concentrate are also available however, thrombotic events leading to pulmonary embolsim have been reported with their use2. Concomitant use of anticoagulants with fibrinogen replacement is an option for such cases2,9.
Fibrinogen levels of 50-100 mg/dl are adequate to maintain normal haemostasis2. To reduce the risk of viral transmission cryoprecipitates collected by .plasmapharesis from selected donors have been tried15. Hence from these
cases we observed that congenital afibrinogenemia though rare, is encountered in this part of the world and should be considered in the work up of cases presenting with bleeding diathesis.

Benign Fibrous Histiocytoma of the Rib