Benign Fibrous Histiocytoma of the Rib

Benign fibrous histiocytoma (BFH) of the bone is a rare tumor which most commonly involves the wing of the ilium. Patients range from 5 to 75 years in age and no sex predilection has been noticed. Until recently BFH was considered to be a variant of metaphyseal fibrous defect (including fibrous cortical defect, non-ossifying fibroma etc.). However, based on radiological and clinical features BFH has now been assigned a separate category with different prognostic implications1,2. Only about 70 cases of BFH have been reported in the literature so far2. We report a BFH of the rib in a 32 year-old female.

A 32 year-old female presented with left-sided chest pain. On investigation (plain X-ray and CT Scan of the chest), she was found to have an expansile bony lesion involving the left fifth rib laterally, with some sclerosis and cortical thinning medially but without any cortical breech or bone destruction. 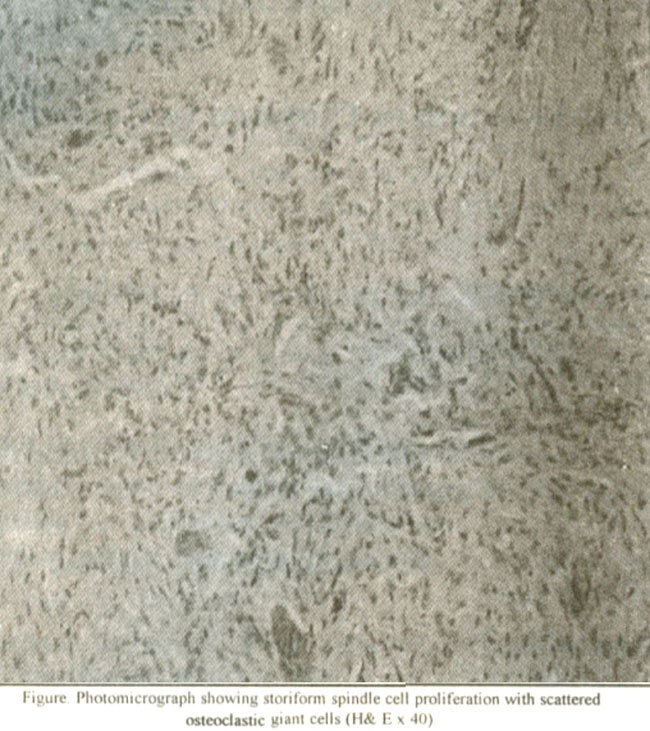 The patient was operated upon and the rib resected. It showed a fusiform swelling 5x3.5x1.3 crns. After fixation in 10% formalin and decalcification in formic acid, haernatoxylin and eosin stained sections were prepared. Van Gieson, Masson’s trichrome and reticulin stains were additionally used to facilitate diagnosis. Microscopically the lesion was found to be composed of proliferated benign spindle cell fibroblastic tissue displaying an interlacing and storiform arrangement with a scattering of osteoclastic giant cells. Focal clusters of foamy histiocytes were also identified. There was no nuclear pleomorphism and the mitotic activity was not enhanced. Reactive bone formation was seen along the periphery. Post-operative recovery was uneventful and the patient has remained symptom-free to date.

Non-ossifying (non-.osteogenic) fibroma and fibrous cortical defect (seen in subjects ranging from 2-20 years in age) are in general clinically silent, predominantly occur in the long bones of the lower limbs and are usually discovered on roentgenograms for incidental reasons1,3,4. They are not true neoplasms but are considered to be developmental defects. Their rarity in children less than 2 years of age is consistent with the belief that muscle pull during weight bearing and walking is important in their prognosis. Their infrequency in adults supports the concept that most lesions heal by being replaced by normal bone4. BFH (fibroxanthoma) on the other hand is considered by most people to be a tumor with different clinical and radiological features1,2. The exact nature of BFH remains controversial, benign variant of malignant fibrous histiocytom a. adult NOF. regressive form of giant cell tumor and solid aneurysmal bone cyst being the possibilities offered by sonic of the authors1. Almost all the reported cases of BFH (only about 70 cases uptil now) have occurred in patients older than 20 years of age and many were accompanied by pain. The most common site involved is the ilium, followed by the femur, vertebrae, tibia and ribs (six cases)2. The importance of differentiating between NOF and BFH lies in the fact that BFH has a tendency to recur after curettage, while NOF does not. Additionally BFH has been known to behave in an aggressive manner with a potential for local spread and distant dissemination2,4. Most histologic features including mitotic rate do not appear to correlate with recurrence2. The use of the terms xanthofibroma, fibroxanthorna and xanthoma etc. is rather ambiguous and confusing, having been used interchangeably with BFH as well as NOF2-4. Radiologically both NOF and BFH show a lytic appearance. however BFH usually also displays sclerosis and may rarely show destruction of cortex and invasion into adjacent soft tissue1,2. Giant cell tumor, giant cell reparative granuloma, eosinophilic granuloma, osteosarcorna etc. are all included in the differential diagnosis. In effect therefore, the diagnosis of BFH is one of exclusion2.

The authors would like to thank Dr. T.N. Vinh, M.D, Assistant Chairperson and Head Department of Orthopaedic Pathology, Armed Force Institute of Pathology, Washington, USA for reviewing the case.