For many vears geneticists and epidemiologists have studied the etiology olcoronary artery disease (CAD) separately rather than in concert. Genetic and environmental factors were opposed to cacti other. Only recently has the debate on genes versus environment been superceded by research into the interaction of genetic and environmental factors in the prediction of CAD. The better one understands the effects of genetic and environmental factors, the more one recognizes the effect that synergic interaction amongst most of these factors have on determining the coronary risk. It is now realized that the most important mode of action of certain genetic factors is through their interaction with environmental factors1. With the recognition of the importance of genetic factors in the etiology of premature coronary artery disease, several studies have come forward in the recent past. highlighting the role of various risk factors and their association with inheritance, for example. Rallidis et al2 and Genest et al3 have reported high prevalence of lipid disorders in offspring and first degree relatives of subjects with premature CAl). Assessing the contribut ion of genetic and environmental factors to the development of early CAD. on behalf of the Europcan Atherosclerosis Research Stud (FARS), which studied the biological expression in young individuals, of a parental history of premature CAD. Rosseneu et al4 report that apo B and triglycerides were the strongest discriminators between offspring of fathers with premature CAD and control subjects. Srinavasan et al5 conclude in their study that serum Lp(a) level may prove valuable in the assessment of CAD risk early in life among white population. They also emphasize the need to evaluate the atherogenic potential of Lp(a) in different racial groups.

The study was conducted at Basic Medical Sciences Institute, Karachi, in collaboration with National Institute of Cardiovascular Diseases, Karachi. Subjects were divided into two groups. Group A and B. Thirty subjects were placed in group A. These subjects were the offspring with the history of paternal myocardial infarction. The subjects included were between the age of 8-25 years. Obese, married or those suffering from any major illness were excluded.
Thirty subjects with no history of faniilial hypercholesterolemia and CAD served as controls. They were age and sex matched with subjects in Group A. Data collection for various groups was standardized through the use of similar methodology protocol and procedures. Data on age, education and smoking habits was obtained using a standard questionnaire. Weight was measured on a balance scale while participants were without shoes and heavy outer garments. Height was measured in the standing position following weight measurement. Blood pressure of the subjects was measured twice in the right arm, after 5 minutes of rest, using a standard mercury sphygmomanometer. The design and intention of the study were thoroughly explained to the subjects or their parents in case the subject was less than 14 years of age. All study subjects were iterated and requested to fill a predefined questionnaire. The subjects were asked to fast for 10-12 h: sixml venous blood was collected from the antecubital vein while the subjects were sitting upright. Sampling was done between 0700 and 0900. Those samples, which showed sign of hemolysis, were discarded.
Handling and Storage of Samples
A strictly predefined protocol was used for specimen preparation. Blood was collected in glass tubes which had been kept in 8 N HNO3 for 24 hours, washed and rinsed with deionized water and dried in oven. The additive free blood tubes were put on ice in the ice-box immediately after collection. Whole blood tubes were kept at room temperature until clotting was completed which were then centrifuged at 3000g for 10 min within 1 h after blood drawing. Serum was separated and stored in aliquots at -20°C in deep freezer until assayed (within one month). Samples were analyzed in one run at the end of the study, to omit between-analytical variation.
Lp(a) was measured on Humalyser 2000 (spectrophotometer), Cat. No.18-3000, manufactured by Human Diagnostics, Germany. using the kit cod: 1107020 supplied by Spinreact, Spain. The method is based on turbidimetry. Serum total cholesterol, HDL-C and triglycerides were analyzed enzymatically, using the kits supplied by Spinreact,, Spain. LDL-C was calculated by a modification6 of the Friedwald formula7.
Statistical Analysis
The results were expressed as mean ± SEM and the differences in lipids and lipoproteins profile were tested by Student’s t-test.

Table 1 compares the characteristics of subjects placed in group A (offspring with paternal history of myocardial infarction) with the subjects placed in Group B (offspring without paternal history of myocardial infarction) serving as control. Offspring in group A had a mean age of 16.86 ± 0.78 years and body mass index of 21.27. The control groups’ mean age was 18.66 ± 0.9 years and body mass index of 19.84. In group A, there were 18 boys and 12 girls and to 19 boys and 11 girls in group B. No significant difference of age, body mass index and sex was observed in both the groups.
The values are expressed as mean ±S.F.M. The number of observation is shown in parenthesis. 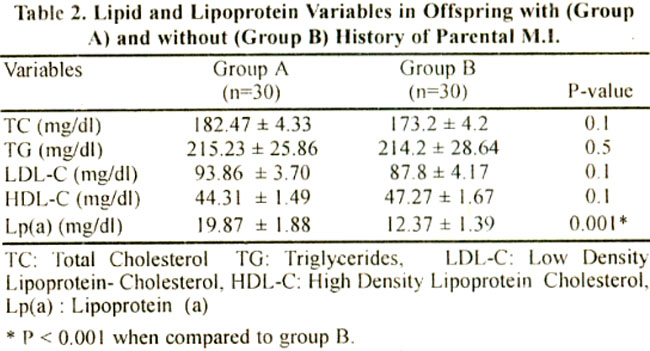 Table 2 compares the values of total cholesterol, triglycerides ,LDL-C, HDL-C and Lp(a) in the two groups. In the group A. the mean value for total cholesterol was 182.47mg/dl, triglycerides 215.23 mg/dI and for LDL-C it was 93.86 mg/dl. The same variables when compared in group B, were total cholesterol 173.93 mg/dl, triglycerides, 214.2 mg/dl and for LDL-C, 87.8 mg/dl. Although one can notice light difference, being on the higher side in group A, yet statistically, the difference in all these three variables turned out to be insignificant.
The mean value for HDL-C in group A was 44.31 mgldl as compared to group B which had 47.27 mg/dl. The difference was insignificant.The mean serum concentration of Lp(a) in group A was 19.87 mg/dl as compared to 12.37 mg/dI in group B. In contrast to all of the above variables, the difference was highly significant (p<0.001), statistically.

The increased frequency of ischernic heart disease in relatives of heart-attack victims compared with relatives of control subjects and a concordance of ischemic heart disease higher among monozygous twins than dizygous twins suggest that hereditary factors play a role in the development of occlusive coronary disease8. Craig and co­workers9 reporting on the meta-analysis of prospective studies have documented that l.p(a) is an independent prospective risk factor for IHD and that its measurement may be useful to guide management of individuals with a family history of IHD or with existing disease . Elevated levels of plasma Lp(a) have been reported in children with familial hypercholesterolemia10.
Measurement of Lp(a) may be useful to guide management of individuals with a family history of IHD or with existing disease. There is however a controversy about the levels which should be placed in high-risk bracket. A recent study conducted11 on the serum Lp(a) profiles in Singaporean population, involving three ethnic groups. demonstrated highly variable mean values among different ethnic groups. The range lies between 8.2 mg/dl to 45.7 mg/dl. Bhopal et al12 have reported similar differing values among various populations living in UK. The difference in various ethnic groups is quite understandable since there is a strong, well recognized genetic basis of inheritance for Lp(a).
It has been reported by Saku et al13 that plasma Lp(a) level is regulated by the apo(a) gene and that it may account for more than 90% of inter-individual ditierences within a pedigree. Thev have also reported that subjects with extremely high Lp(a) levels had small apo(a) isoforms and those with extremely low Lp(a) levels had large apo(a) isoforms, confirming that an inverse relationship exists between apo(a) isoform size and plasma Lp(a) levels. This genetic basis of inheritance is the corner stone of the research to find the association between the serum Lp(a) levels of patients with premature CAD and their offspring .Vella and Jover14 have studied the relation of Lp(a) in adolescents to parental cardiovascular heart disease. They have reported that the olispring with affected parents had a higher mean Lp(a) as compared with offspring whose parents did not report cardiovascular heart disease. They go on to suggest that not only Lp(a) is an important risk factor for cardiovascular heart disease but also that Lp(a) is more strongly related to the risk of cardiovascular heart disease than are HDL-C and LDL-C. Among black children, the levels of the Lp(a) remained similar, irrespective of the status of parental history of myocardial infarction, hence proving race to be an independent variable that contributes appreciably to the variability of Lp(a) in serum, proving vet another time that Lp(a) levels in an individual is a result of genetic rather than environmental factors. In a similar study. Chen et al15 have reported similar results. A significant correlation between serum Lp(a) of offspring to parents Lp(a) and other risk factors has been reported by Bailleul and co-workers16. We report in our study a significantly higher levels of serum Lp(a) in offspring with paternal history of premature CAD as compared to offspring without paternal history of CAD. The results reported here are consistent with the findings reported by previous authors. The Lp(a) levels of offspring showed an insignificant, positive correlation with the Lp(a) levels of their fathers.
We did not examine heritability and common environmental factors in our study because data used here were from population-based sample. Heritability estimates for Lp(a) can be obtained in full sibs by multiplying the intraclass correlation coefficients by two. However, this will overestimate the true heritability if the common environmental factors are shared by siblings, or if dominant gene, influence the trait. Pedigree data are needed to separate the components of dominance and common environment in the total variance.
The present study provides serum iipoprotein(a), TC, TG, HDL-C and LDL-C levels in offspring and examines the relation of Lp(a) levels in offspring to paternal myocardial infarction. The present study also underscores the association of Lp(a) levels with CAD risk early in life. Offspring of fathers who had a myocardial infarction tended to have increased levels of Lp(a) compared with those without the parental history. The results of Lp(a) determinants on the offspring of men with premature myocardial infarction provide a comprehensive picture of the discriminative and predictive value of this variable.
None of the other lipoprotein variables we examined exhibited a significant difference between the two groups of subjects.
in conclusion, the results of this study consistently demonstrate, that the offspring of fathers with early myocardial infarction have higher mean values of Lp(a) than control subjects, suggesting that this lipid variable may strongly predispose to CAD. Although a possible influence of the familial environment may account for part of this result, a genetic predisposition to CAD is also likely to be involved because Lp(a) levels are strongly genetically determined.