Objective: To find the prevalence of psychiatric disorders among the opioids dependents and to assess the severity of their addiction profile.
Method: Sample comprised of fifty patients admitted in drug treatment and rehabilitation center at Psychiatry Department of Lady Reading Hospital, Peshawar, between March to August 1997. DSM-IV diagnostic criteria were applied to diagnose substance dependence and associated psychiatric morbidity, while Hamilton Depression Rating Scale, Hamilton Anxiety Rating Scale and Addiction Severity Index were used to assess severity of anxiety, depression and dependence respectively.
Results: The major co-morbid psychiatric conditions were major depression (30%), personality disorder (6%), generalized anxiety disorder (4%), phobic disorder (4%), panic disorder (2%), dysthymic disorder (2%).
Conclusion: The overall findings in this study lends support to the hypothesis, that there is susbstantial psychiatric co-morbidity amongst the opioid abusers and dependents in our population, as is found in studies from the West (JPMA 51:183;2001).

Substance abuse coexisting with other psychiatric disorders poses complex diagnostic and therapeutic challenges. Although the concept of co-morbidity is controversial1 it provides useful conceptual framework. Co-morbidity is often associated with high rates of continued substance use, greater psychosocial impairment and increased utilization of services2,3. Similarly the intervention for coexisting psychiatric morbidity may improve the outcome for the drug dependents4.
Studies of psychiatric co-morbidity in opioids abusers suggest that up to 80% patients meet the criteria for at least one non-substance use disorders during their life tirne5 while current disorders have been reported in 30%-70% of the patients6,7 Mood disorders particularly depression and antisocial personality disorders are the commonest psychiatric diagnoses reported in patients dependents on opioids followed by dysthymia and anxiety disorders5. The variations in figures of co-existing psychiatric disorders is understandable in view of the widely different diagnostic criteria used, the different populations studied and different settings8. It is therefore very difficult to compare the studies which are carried out in different settings and the results cannot be generalized.
According to the United Nations International Narcotic Control Board report, the illicit cultivation, production and trafficking of the drugs almost always result in abuse amongst the local population where Pakistan’s case has been quoted as the classic example where the number of substance abusers rose to an alarming 500,000 in the space of only 5 years9.
North West Frontier Province (NWFP) in Pakistan is the hub of poppy cultivation and drug trafficking activities. As a result it has gone through an epidemic of drug abuse particularly opioids. According to the national survey carried out in 1993 in Pakistan, there are more than 3.01 million substance abusers in Pakistan10. A thorough literature search on the subject found that there are only a few studies of incidence and prevalence and pattern of substance abuse in this part of the world. Based on retrospective record, coexisting psychiatric morbidity has one study in Pakistan9. Present study is therefore an attempt to find out the prevalence of psychiatric disorders in opioids abusers and its correlates.

This study was carried out in drug treatment and rehabilitation center of psychiatry unit Lady Reading Hospital, Peshawar, Pakistan. The hospital is a teaching facility for Postgradute Medical Institute Peshawar and is a tertiary referral center of the North West Frontier Province. The hospital catchment area extends well beyond North West Frontier Province into Afghanistan across the border.. All the patients admitted between March and August 1997 meeting the D.S.M-IV criteria for substance abuse (opioid type) were included in the study. Diagnoses of psychiatric co-morbidity were made using Diagnostic and Statistical Manual (DSM-IV) diagnostic criteria laid down by American Psvchiatric Association199411. The patients above 65 years and below 15 years of age were excluded. Patients suffering from serious medical illness, having organic brain disease except with drawl delirium and those who could not be assessed due to communication problem i.e., those Afghan speaking Persian and Turkmanistani languages were also excluded.
Mental state of patients was assessed with the help of Present State Examination (PSE)12 two weeks after detoxification in the center. A close relative was also interviewed to gain further information about pattern and frequency of substance abuse. Severity of substance abuse was assessed with the help of Addiction Severity Index (AS!)13. It is an instrument that provides in a semi-structured interview, a multi-dimensional assessment of substance abuse patients. The scale was designed in 1980 by McLellon et al14 which provides assessment of problem severity in seven functional areas, in which substance abusers are commonly impaired and enable assessment of need for treatment. Severity of anxiety and depression was assessed with the help of Hamilton Anxiety Rating Scale (HARS) and Hamilton Depression Rating Scale (HDRS) respectively.

The study was conducted between March and August 1997. During this period seventy patients of opioids abuse were admitted in the center. Thirteen patients were excluded due to concurrent physical disorder (pulmonary tuberculosis and acute bronchitis) while seven patients were out side the age limit defined for the study. Majority of the patients were male (98%), having mean age 27 years and unemployed or working in non-skilled jobs. Details of the demographic features are given in Table 1. 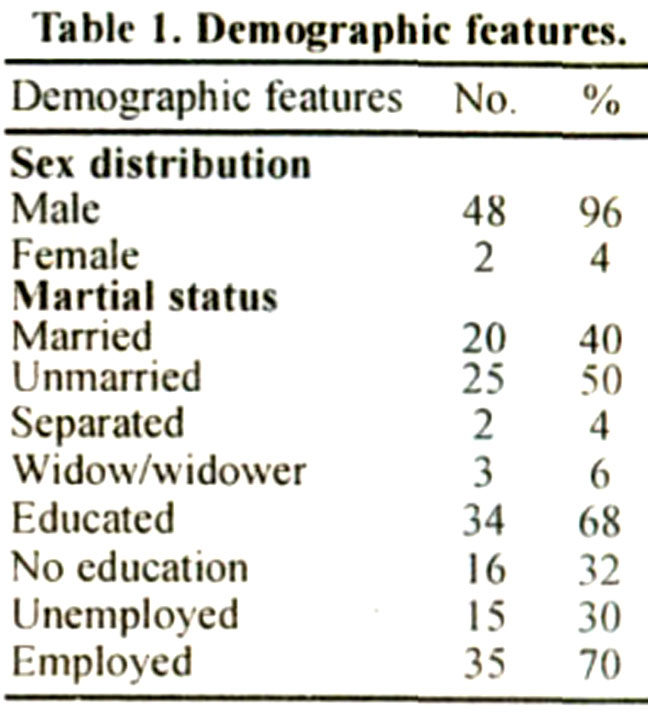 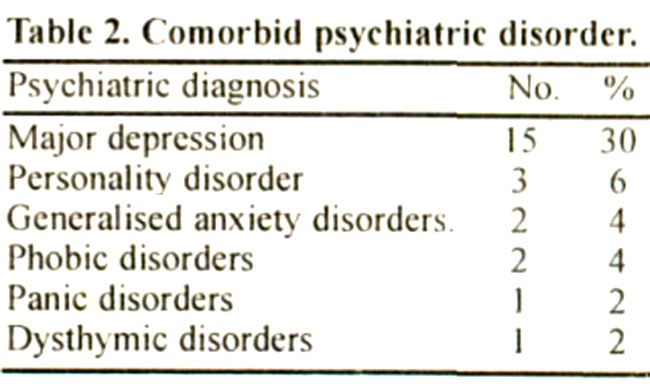 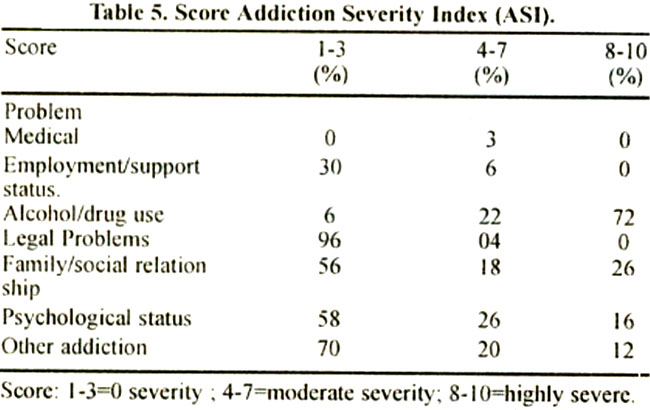 Sixty two percent of the patients were abusing the substance for more than five years, with average intake of approximately 1.5 gram heroin per day. Sniffing was the most common route of administration i.e., 90% followed by oral and intravenous routes.

This study has revealed interesting pattern of psychiatric co-morbidity in patients with opioids It has to be noted that the sample size was small; population of the study from a tertiary care center may not be truly representative of opioids dependent in general and there was no control group to compare the psychiatric co-morbidity. Despite these limitations this study is an attempt to investigate the psychiatric co­morbidity in an area which has experienced virtually an epidemic of opioid dependence.
in the present, study 24 patients (48%) had an additional psychiatric condition. This is in general agreat ent with most of the studies on the subject. For example Brooner et al15,8 reported psychiatric co-morbidity of 37%, 47% respectively. Similar by Rouser et al16 reported that 39% patients had an additional psychiatric diagnosis. However Kessler et al7 reported about 50%, Dake et al17 60% and Limbeek et ale’ reported 85% additional psychiatric co-morbidity in their opioid dependent population. On the contrary Mericangas et al18 and Musharaf and Rehman9 reported less than 10% psychiatric co-morbidity in their samples. As discussed earlier there can be several reasons for these wide variations, including widely different population studied by different authors, use of different diagnostic criteria and the heterogeneous settings in which the studies were conducted. The relatively higher psychiatric morbidity in our sample can be attributed to a number of variables. One of the reasons seem to be, that the duration of drug dependence in this population was quite long, on an average about t’ive years. It appears that psychiatric co-morbidity tends to accumulate with time probably due to the effects of the drugs on central nervous system and the resulting social and psychological complications.
Depression was the most commonly associated co­morbid condition. Slightly less than one third (30%) of the patients had major depression. This is consistent with the findings of Limbeek et al6 and Regier et al19 while Rounsaville et al20 reported a high figure of around 48% with major depression in their samples. Although Musharaf and Rehman9 reported a much lower figure of less than 2% in their study. It has to be noted that this was a retrospective study based on case notes which could have inherent problems. The findings of this study along with those of other studies, indicate that about one third of patients suffering froni opioid dependence have additional depressive illness. These findings seem to lend support to the hypothesis of a relatively high prevalence of psychiatric co-morbidity among opioid dependents seeking treatment6.
In this population a much lower prevalence of anxiety disorders (panic anxiety, phobic disorder O.C.D), psychotic illnesses including mania, schizophrenia and personality disorder were found. Generally, anxiety and the psychotic disorder have been found to be less associated with opioid dependence8,9,19. However comorbidity of schizophrenia and substance abuse has attracted considerable attention in recent years21 as the cornorbidity of the two conditions is rapidly increasing22, Fowler et al23 reported a higher prevalence of about 26% for overall substance abuse in schizophrenia however opioid has been reported in 2-9% only. Similarly Cantwell et al24 showed that )7% of sample of 1st episode psychosis met the diagnosis of substance abuse including 8.4% with substance related psychotic disorder. There is agreement amongst most authors that substance abuse and schizophrenia are associated not only with violence but also with a number of other problems including poor treatment adherence , an increased suicide risk, increased rates of hospital admission and H.I.V infections21.
Similarly personality disorder has been found to be one of the common diagnostic category reported in studies especially from the Western countries. Personality disorder has been an additional diagnosis in excess of 30% in many studies6,15,16,17,19. Dake et al even reported a figure of 60% iii this study17. The low prevalence of personality disorder in our sample i.e., 6% is also in line with another study from our province9.
It appears that the low prevalence in this study is because the patients presented as self referrals to a teaching hospital unit. Mostly patients willing to receive help with some family support have probably been referred to this service. The “hard core” addicts with some personality disorder might not have presented to our services. This is however an interesting finding and needs to be studied further with the help of standardized instruments to diagnose and measure the personality disorder in our population. This study highlights the high prevalence of psychiatric co-morbidity in patients with opioid dependents and its implication. Most common co-morbid psychiatric condition is major depression. This has important implications for prevention and management of substance dependence particularly the opioids. It appears that in clinical practice most of these cases go undetected even in the tertiary care units as was the case in this center. Proper treatment of depression can probably help to decrease the severity, duration and complications of drug dependence. It has been observed that an additional axis II diagnosis makes the outcome of the treatment of drug dependence more difficult15. The lower prevalence of personality disorder in our population is an encouraging indicator in the treatment and rehabilitation of this population.
It is evident that the sample had significant psychiatric cornorbidity. Most common psychiatric disorder is major depression. In clinical practice most of these disorders go undetected even in the tertiary care centers. Detection and treatment of depression has significant primary and secondary preventive role in the management of substance dependence. So there is a need for screening all opioid dependents for psychiatric disorders who come for detoxification.
The high prevalence of psychiatric disorders in this study necessitates the screening of all opioid dependents, seeking treatment for psychiatric disorders and proper training of the staff working in the drug abuse treatment centers and a properly translated instrument to detect psychiatric morbidity.