Objective: To compare the tolerability and efficacy of salbutamol and theophylline in treating wheezy infant.
Design: This was a prospective parallel group study.
Setting and subjects: Wheezy infants admitted in paediatric ward of Khulna Medical College Hospital from January 1998 to March 1999.
Main outcome variables: Palatabity of drugs, clinical efficacy of drugs and adverse events during treatment.
Results: Ninety five patients had undergone this study. Forty eight were was in salbutamol group and 47 in theophylline group. Clinical problem at the beginning was recurrent wheeze (46.3%), wheeze with fever (32.6%) and spasmodic cough (21.1%). Salbutamol was more palatable (P <0.001) than theophylline. However efficacy of both the drugs were nearly equal (P >0.1). Adverse effect was more frequent in theophylline treated children (47.4%) than in salbutamol group (24.4%).
Conclusion: Salbutamol is better tolerated than theophylline whereas both the drugs were equally effective for bronchodilation in infancy (JPMA 51:187;2001).

Asthma or wheezy bronchitis is the leading cause of chronic illness in childhood1. This is a diffuse airway obstructive disease characterized by hvperreactivity of airways and a high degree of reversibility. Asthma complex includes wheezy bronchitis, viral associated wheezing and atopic asthma2.
Wheezing in the infant merits special attention because it is common and presents substantial diagnostic and therapeutic problem3. Thirty percent children are symptomatic by one year of age and 50% under 2 years of age. Two distinct anatomic peculiarities of early life predispose to obstructive airway disease4: (I) a decreased amount of smooth muscle in the peripheral airways and (ii) disproportionately narrow peripheral airways.
The clinical features of asthma and bronchiolitis are quite similar, although the aetiology and management are different5. Repeated attacks of wheeze is the most important differentiating point between the two. A significant proportion of infants with bronchiolitis develop hyperreactive airways which give rise to asthma in late childhood6.
Principles of management of asthma are avoidance of allergen and bronchodilation1,7. Hyposensitization though popularly practised is highly debateable7. Pharmacologic therapy is mainstay of treatment for bronchodilation. Currently used bronchodilators are B2 adrenergics, xanthine derivatives, epinephrine and atropine derivatives8-10. Continuous research in this field is pouring newer drugs in the niarket. Even today, we frequently use salbutamol or theophylline for the wheezy infant and dilemma remains regarding choice of drugs. So far we know, no such comparative study has been done before. Although the ultimate effect of salbutamol and theophyllin is bronchodilation but the mechanism of action are different. Therefore, this study was carried out to compare the tolerability and efficacy of salbutamol and theophylline in treating wheezy infants.

Design: This prospective parallel group study was performed in Khulna Medical College Hospital (KMCH) from January 1998 to March 1999. Written informed consent was obtained from the parent or legal guardian. Those included in the study, were inpatients at KMCH between the ages of 2 and 12 months and of either sex and with wheeze or ronchi. Patients suffering from bronchiolitis and pneumonia were excluded, however wheeze associated with fever and cough were included in the study. Medications as steroids, that could interfere with the observation, were not permitted during the study period.
The demographic data as age, sex, weight, primary diagnosis, number of attacks, treatment received and family history were recorded. The study medication were salbutamol (Ventolin prepared by Glaxo) and theophylline (Jasophyline prepared by Jayson) in syrup form. Randomization was done in alternate patients to allow for equal number in each treatment group. The dose of medication was determined by body weight. Salbutamol (0.5mg/kg/day) and theophyl line (20mg/kg/day) both in three divided doses. Medications was administered for 48 hours in all patients and then it was continued if improved and withdrawn if not improved or intolerable.
Evaluation - Palatability was noted by observation of childs reaction during medication on four point scale (From 0=very unpleasant taste to 3 very pleasant taste), clinical efficacy was recorded by auscultation for ronchi or wheeze at 12 hourly interval and expressed at four point scale (0= No change, 3= Much improvement). Adverse events were documented with respect to nature and severity.
Statistics - The planned sample size was 50 in each group. But 2 in salbutamol and 3 in theophylline group left the hospital on first day. After 48 hrs. drugs were withdrawn from 3 children in Salbutamol and 9 children in theophylline group. All statistical tests performed were two tailed with significance reference to 5% level. The null hypothesis was that salbutamol and theophylline were equivalent. Normal deviate (Z) test was applied to compare between two groups.

Table 2 demonstrates palatability of drugs, and Table 3 the clinical efficaicy.

It was observed that the overall improvement with both drugs was similar and statistically insignificiant.
Drugs were withdrawn from 9 children in the Theophylline group which is three times more than that in Salbutamol group, Among the remaining patients, 11 out of 45 suffered from some degree of adverse reactions in Salbutamol group (24.4%) and 18 of 38 in theophylline group (44.4%) (Table 4). 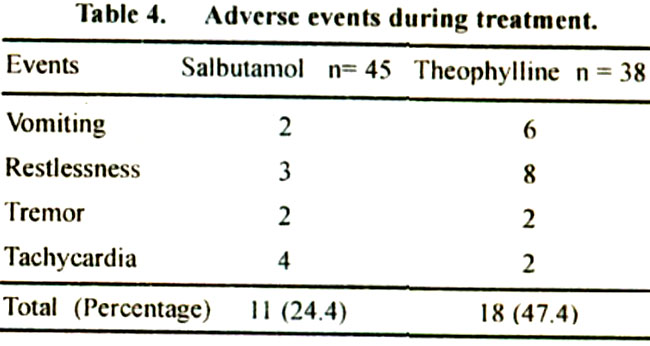 Wheezing occurs when the airflow from the lungs is obstructed due to narrowing of smaller airways. The main causes of wheezing in infants are bronchiolitis, other respiratory infections and asthma1,2. The first episodes of wheezing in infants under one year of age in usually due to bronchiolitis11 Recurrent episode of wheezing suggests asthma and is usually triggered by respiratory infection.
Clinical management of recurrent asthma depends on the severity2,3. Children with central cyanosis and unable to drink, should be treated with rapid acting bronchodilator (nebulized salbutamol) and oxygen. In the absence of above two signs, they can be treated with oral bronchodilators. Some paediatricians do not try bronchodilators in infants less than 6 months age, since only a small number respond Usually antibiotics is not necessary unless there is sign of infection. Radiography can reliably differentiate between wheezing from pneumonia, bronchiolitis and others3.
Excluding the first attack of wheeze and pneumonia, three groups of cases were observed in this study. A large number (44) of cases belonged to Asthma of which majority presented in late infancy (61.3%) whereas wheeze due to URTI mostly occurs in early infancy (67.8%). Nearly one quarter of the total patients presented with cough only.
These finding are consistent with other observations1,3.
Methylxanthines, once dominating, the scene, still have some use in asthma. Theophylline, caffeine and. theobromine share in common several pharmacological actions of therapeutic interest12. They relax smooth muscles, notably bronchial muscles, stimulate central nervous system, and cardiac muscle and act on the kidney as a diuretic13. The mechanism of underlying theophylline induced bronchodilation is still not clear8. Theophylline produces modest decrease in vascular resistance and by means of ionotropic effect increases perfusion of vital organs. Ventilatory function is improved by improvement of diaphragmatic contractility. It increases urinary output by increasing glomerular filtration.
B adrenergic receptor agonist plays a major role in the treatment of bronchoconstriction8,14. Development of selective B2 agonist resulted in adequate oral bioavailability and diminished effect on cardiovascular system. Away from bronchodilatioii it suppresses the releases of leukotriens and histamine from mast cells, enhances mucociliary function and decreases microvascular permeability.
Natural taste of theophylline is bitter and salbutamol is tasteless. This study revealed that theophylline is less palatable in comparison to salbutamol. Although the pharmaceutical companies try to mask the bitterness by adjuvants, theophylline is least acceptable to children and difficult to continue. It has been observed that the efficacy of both drugs is quite good. Given the difference in mechanism of action, both are almost equally effective for clinical improvement. It reminds us why some authors still favour the use of theophylline in infancy15,16 According to recent international guidelines for the treatment of asthma, strategies do not differ substantially for different age groups except use of nebulizer and cromolyn below 5 year3,17. There has been mounting concern that treatment of asthmatic children with theophylline might produce insomnia, restlessness and excitement8-18. Theophylline is gradually losing its prominence because of modest benefit and narrow therapeutic window19.
Systemic B2 agonist has some common adverse effects as skeletal muscle tremor, tachycardia and restlessness8. These adverse effects can be minimized by starting with a low dose or administering by inhalation8,13.
In this series, mild to moderate adverse effect, were far more common in theophylline group and the number of events (18) outweigh those of salbutamol11. Again, drug withdrawal was three times more common in theophylline than salbutamol group, which clearly delineates either ineffectivity or severe adverse effect. On the contrary. theophylline has been the standard modality of treatment for apnea of prematurity. However kinetics of theophylline in neonates is different from that in children and adults20. Further, it has got synergistic effects when combined with B2 agonists and unlike steroids long term use does not suppress growth of children13,21.
In conclusion, both salbutamol and theophylline are equally effective for bronchodilation but tolerability of salbutamol is much better than theophylline. Therefore sulbutamol is a better choice between the two for wheezy infants.