Objective: To study the adolescent student’s knowledge and its sources about AIDS, and its mode of spread in lslamabad.
Setting: One boys and two girls schools in Islamabad.
Methods:  A cross-sectional survey was conducted, using an anonymous, self-administered, brief Urdu questionnaire which was distributed among 100 boys and 182 girls.
Results: The response rate was 100% and the average age of respondents was 14.6 years in boys and 12 years in girls. Most respondents knew about AIDS and reported television as their main source of knowledge. Most respondents also correctly believed that AIDS patient can pass on the disease to others, however, they had erroneous beliefs about its mode of transmission.
Conclusion: This study testifies to the effectiveness of the successful television based health education campaign regarding AIDS in the adolescent boys and girls, in Islamabad (JPMA 51:194;2001).

Official statistics of National AIDS Programme of Pakistan, report screening of a total of 23,40,000 blood samples throughout the country from 1986 to 1999, resulting in a total of 1395 HIV positive and 178 full-blown AIDS cases1. As these numbers are based on statistically non-representative samples; they suffer from selection bias.
Health education inculcates healthy attitudes and behavior and provides the means of preventing AIDS pandemic. In Pakistan, HIV/AIDS education at the secondary school levels has been recommended in the National Education Policy, but not yet implemented2.
Several developing countries have embarked on model programs for imparting HI V/AIDS education at the secondary school level for adolescents3,4. Such efforts have been concluded as “sound investments” in the next generation of socially responsible adults5.
In Pakistan, little information is available on adolescent’s knowledge about AIDS and its sources. This study was undertaken to study adolescent students, both girls and boys, sources and adequacy of knowledge about AIDS in Islamabad.

Using an anonymous, self-administered, brief Urdu questionnaire with close and open-ended questions, a cross-sectional written survey was conducted in one boys and two girls schools in Islamabad. The study was conducted in two phases. The first phase was done in June 1999, during which male students of class nine and ten participated, while in the second phase female students of class seven and eight participated. The second phase was conducted in May 2000. All the students attending the classes on the day of the study, participated. Cumulatively 100 boys and 182 girls participated in the study, with none abstaining. The average age of respondents was 14.6 years (range 14-17) and 12 years (range 11-14), in the boys and girls respectively. Respondents were asked whether and where they have heard about AIDS, its mode of transmission, and existence of cure.
The results are presented in Table 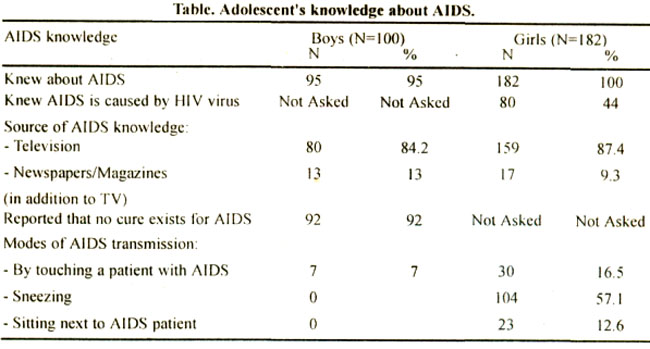 Most respondents knew about AIDS and reported television as their source of knowledge. Most respondents also correctly believed that AIDS patients can pass on the disease to others, however, they had erroneous beliefs about its mode of transmission. The average number of hours of television watched each day, was reported to be 2.4 hours (range 1-5 hours) and 2.3 hours (range 0.5 - 4 hours), by boys and girls respectively.
Comments
There are no population-based representative studies to elucidate the epidemiology of either sexual behavior/practice or the epidmiology of HIV/AIDS, in any gender or age group, in the country. In this study attempts to include questions on sexual knowledge and behavior were sternly denied by the school management.
Adolescents are the most vulnerable age group in the global pandemic of AIDS. Educating adolescents about AIDS as the National Education Policy envisages, would be a step in the right direction. Such education by necessity would need to include education on human sexuality. The success of this public policy would hinge on addressing and allaying, parental concerns, that such preventive health education does not inherently lead to initiation of sexual activity in the adolescents.
Regarding the mode of transmission of AIDS, respondents’ lack of adequate knowledge in this study could be attributed to the sttbtle messages used in the electronic media.
However, the results of this study are remarkably similar for boys and girls, inspite of the fact that there was an year-long time difference between the two phases of the study. In this time period there has been an increase in both, the volume as well as explicittness in the health education messages, of the AIDS education campaign in the print and electronic media.
Nonetheless, this study attests to the continued success and effectiveness of television based HIV/AIDS, health education campaign with reference to both genders in the adolescents, atleast in Islarnabad. But the potential of this medium is limited as a health education tool, as access to television is far from universal in the capital city or for that matter in the country.