Objectives: To evaluate the post-operative complications of intramedullary nailing technique by transpatellar approach compared to medial parapatellar approach.
Methods: Fifty patients with tibial fractures treated by intramedullary nailing through two transpatellar (t-group) and medial parapatellar (p-group) approaches were studied. Knee pain was assessed with visual analogue scale (VAS) for 2 weeks, 1, 3 and 6 months and range of motion (ROM) in 2 weeks and 3 months after surgery.
Results: There were 23 males and 2 females with a mean age of 28.68±5.78 years in t-group and 21 males and 4 females with a mean age of 28.80±5.82 in p-group. There was significant difference in knee pain score after 3 months (p=0.013) and 6 months (p=0.009) between the two study groups (p-group had less pain than t-group). But there was not significant difference between the two study groups in range of motion after 2 weeks and 3 months of surgery.
Conclusion: Our study recommends medial parapatellar tendon approach, although both approaches are safe.
Keywords: Tibial fractures, Knee pain, Intramedullary nailing (JPMA 61:530; 2011).

Tibia fractures are one of the common traumatic fractures especially due to car accidents. In young people, the risk of these fractures increases up to 37.5%.1 Fractures of the tibia are among the most serious long bone fractures, due to their potential for nonunion, malunion, and long-term dysfunction, as well as their propensity for open injury. Intramedullary nailing is the gold standard treatment option for displaced closed or open tibial diaphyseal fractures.1,2 Intramedullary nailing acts as an internal splint and permits early weight bearing along with fracture healing.3 Intramedullary nailing is the treatment of choice for displaced tibial shaft fractures in adults.4,5 Several complications have been described including infection,6,7 compartment syndrome8,9 deep-vein thrombosis, thermal necrosis of the bone with alteration of its endosteal architecture10,11 failure of the metalwork12,13 and malunion and nonunion of the fracture and chronic anterior knee pain.14,15 The evolution of tibial intramedullary nails dates back to the work of Gerhard Kuntscher during World War II. Nail design and instrumentation have advanced greatly since Kuntscher\\\'s nail, yet the surgical technique has changed little. Different surgical techniques are used such as Percutaneous reduction with conventional reduction forceps and unreamed intramedullary nailing, trans patellar and medial parapatellar approach but Tibial intramedullary nails are still largely inserted through a trans patellar tendonsplitting or medial parapatellar tendon approach. This article presents a summary of the evolution of tibial intramedullary techniques and describes the complications of different surgical approaches.

In this randomized, clinical trial, fifty patients (44 male and 6 female) were included. Both open and closed tibial fractures were present, which were randomized into two treatment groups during a 16-month period from July 2009 to September 2010, in Tabriz Shohada Hospital. All the patients were treated by intramedullary nailing through two transpatellar (t-group) and medial parapatellar (p-group) approaches. Inclusion criteria were age between 20 and 40 years, open or closed tibial fractures with indication of intramedullary nailing. Exclusion criteria were immune deficiency, Diabetes Mellitus, malnutrition, trauma of head or abdomen or chest, open fractures without indication of intramedullary nailing and wound on nailing site. Educational level of the patients, (university graduated or no university), and etiology of the tibial fracture (accident or other etiology) were enquired. Type of fracture(open or closed) was also noted. Knee pain according to Visual Analogue Scale (VAS) after 2 weeks, 1, 3 and 6 month and range of motion (ROM) in 2 weeks and 3 months after surgery were assessed. Lengths of skin incision and nail out of anterior tibial cortex was measured. Quantitative data were analyzed using SPSS software of the Paired Samples Test programme. McNemar approach was used for qualitative data significance defined as P-value<0/05. 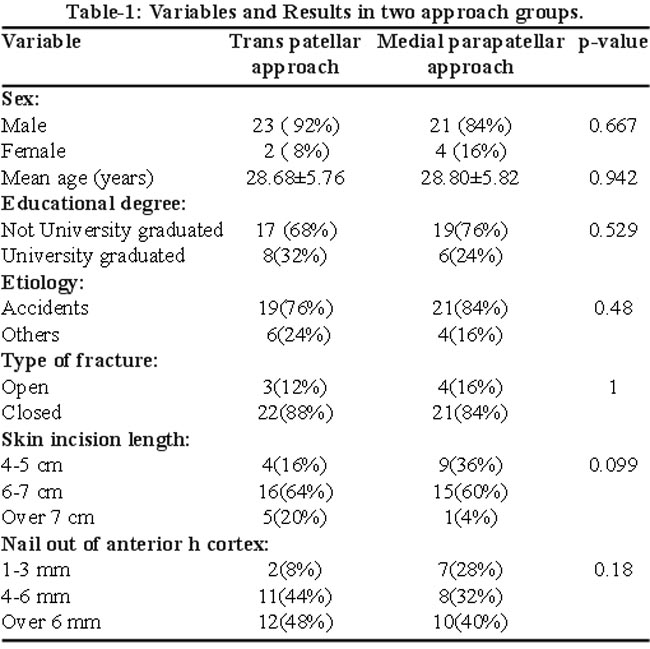 There was no post-operative complication in patients and knee\\\'s ROM was over 90° in flexion after 6 months in all patients.

Intramedullary nailing of tibial fractures has evolved since the 1940s. Advances have been made in metallurgy and nail design, which have expanded the indications for intramedullary stabilization of tibial fractures; however, the approach to nailing a diaphyseal fracture has remained largely unchanged: either a patellar tendon-splitting or medial or lateral parapatellar approach. Tornetta16 and Cole17 have described the use of medial patellar arthrotomies for nailing proximal tibial fractures. These techniques are helpful in reducing the deforming forces, allowing proper reduction of proximal fractures, and preventing a procurvatum deformity. However, they require large incisions for nail insertion. Achieving an accurate approach with less post-operative complications, early mobilization and satisfaction of the patient is an important goal and we based this study on this goal, with a follow up of 6 months after surgery. The mean age of the patients in the study by Babis et al18 was 37.5 which is slightly less than our patients age. Similar to our experience O\\\'Dwyer et al had more males than females showing a higher frequency of tibial fracture in males.19 There was significant difference in pain 3 and 6 months after surgery based on VAS in p-group. The etiology of anterior knee pain after intramedullary femoral or tibial nailing is unclear, although there may be a combination of factors responsible for it. With the numbers available, in their retrospective studies, Keating et al.20 and Orfaly et al.21 found a clear association between a transtendinous surgical approach and chronic anterior knee pain, and they recommended the routine use of a medial paratendinous approach. In contrast, Court-Brown et al. did not find any association between the surgical approach and anterior knee pain.22 Gender and age-related differences have also been given some consideration. Vaisto et al. noted that women were more symptomatic than men and had a longer hospital stay after tibial nailing. The reason is unknown but anthropometric and anatomical differences were suggested as causative factors.23 In contrast to our study Babis et al19 used the 3-4 cm skin incision over the fracture site in 20% patients and in the remaining patients the incision was over 4 cm. In our study, the Trans patellar approach had a 3-4 cm skin incision over the fracture site in 16% and in Medial parapatellar approachit it was in 36% patients. Similar to our study Keating et al24 reported an insignificant difference in the knee range of motion in the two groups (p>0/05).

Our study recommends medial parapatellar tendon approach although both approaches are safe. Protrusion of the nail should be avoided. The implant should be adequately countersunk and the appropriate design chosen regarding its profile and position of the locking screws. More studies to assess the role of other factors in chronic anterior knee pain are warranted.