Objective: To evaluate the process of transport and immediate Emergency Department (ER) management of mass casualties following the recent bomb blasts in Karachi and review in detail the medical response and management of victims undertaken in these two incidents.
Methods: Eyewitness accounts of the victims, medical personnel and newspaper clippings were used to understand and identify difficulties faced during the rescue process. Data regarding presenting injuries and their outcomes was also collected from all victims presenting to the emergency department at Aga Khan University Hospital.
Results: Seventy nine individuals died and over 250 victims were injured in the two incidents. All victims and dead bodies were shifted to the nearest public sector hospital overwhelming the health care facility. Subsequently all victims were evacuated to private sector hospitals creating similar difficulties. Over half of the victims presenting at the emergency department had minor injuries and did not require admission. Most patients requiring admission needed orthopaedic intervention.
Conclusion: A comprehensive disaster plan with a centralized command and control system is required for the city of Karachi, involving all stake holders including charity ambulance services, security agencies, and trauma management facilities. Training courses and exercises for health care personnel should also be made mandatory to achieve professional excellence.
Keywords: Terrorist Bombing, Mass Casualties, Disaster management (JPMA 61:561; 2011).

Globally, terrorism has reached new heights. Pakistan in particular, has suffered tremendously as a front line state in the "war on terror". In the year 2009 alone there were 500 terrorist bombings, 2586 terror related incidents with 3021 deaths and 7334 casualties.1 Despite all out efforts to curb this situation, the number of bomb blasts and resulting fatalities continue to rise exponentially, year after year. The terrorists have been constantly evolving in their techniques and targets, thus causing deadlier results. Consequently, with the given lack of organizational framework to deal with disasters of this frequency and magnitude, problems arising as a result of each one of these events have been unique for the health care and emergency response system of the country.
Karachi, the largest city of Pakistan is also one of the biggest and most densely populated cities of the world. The city is spread over 3,530 square kilometers (1,360 square miles) in area, housing an estimated population exceeding 17.5 million. It is the financial, industrial and trade capital of Pakistan. These facts make the city a lucrative target for terrorist elements.2 This paper describes two incidents with three terror related bombings. The first bombing incident occurred on December 28th 2009, at around 1613 hours when a religious procession was hit by a planted bomb. The tragic incident claimed 45 deaths and over 120 individuals were left injured.3,4 The second incidence on February 5th 2010 had two separate bombs, both planted on motorbikes. The first blast at around 1500 hours targeted a bus carrying civilians to a religious procession. Most of the victims were shifted to a major public sector hospital, which itself became a target of the second bomb blast outside its Emergency Room (ER) at 1645 hours.4 Overall 34 individuals died and 133 were injured in the two incidents.5,6
The purpose of our study was to review the process of transport and immediate ED management of victims, undertaken in these two incidents in relation to the inherent problems of a developing country. Karachi lacks a central command and control center. Pre-hospital care and on the scene triage is non-existent. The city is unique as it does not have a government run ambulance service, while the three largest charity ambulance services in the city work independent of each other and without a central dispatch center.2 The city also lacks a proper central disaster response plan and majority of casualties are directed to either the three major government run tertiary care hospitals or to private medical institutions with mass trauma management facilities.

The study evaluated the process of transport and immediate ER management following these two incidents using interviews of health care personnel, newspaper clippings and review of patients presenting at the Aga Khan University Hospital (AKUH), in Karachi. The Hospital received 49% of the total injured in the two incidents. All injured victims of the incidents, whether secondarily transferred from other hospitals or directly evacuated to AKUH were included in the study. Data obtained from the victims included general demographic variables such as age, gender, mechanism and details of injuries sustained as well as the outcomes of their management. Informal interviews of the victims were also conducted to reconstruct a sequence of events using eyewitness accounts.
AKUH has a working disaster management plan with a capacity to handle 50 simultaneous casualties. The plan has been put into practice on numerous occasions and has been modified based on our experience with such events.7-9

In the first incident (Ashura: December 28th 2009) a bomb blast struck the Ashura procession on M.A. Jinnah Road at around 1615 hours. Initially it was reported as a suicide attack but later investigations concluded that the bomb was planted in a box. According to investigators, the explosives weighed approximately 16 kilograms and also included nuts, bolts and ball bearings to maximize casualties.4,10 Shortly after the incident security officials, scout personnel and ambulance services accompanying the procession immediately started evacuating the dead and injured. Most of the victims were taken to Civil Hospital Karachi, a government operated tertiary health care center. No system of triage was present at the bomb blast site which resulted in a chaotic influx of severely injured intermixed with dead bodies and victims with minor injuries. Reports also suggest that the presence of volunteers and attendants in the emergency room hindered rescue efforts of medical personnel.11 The initial casualties arriving there included 12 dead patients, which led to choking of the casualty, prompting the health minister to announce treatment at government\\\'s expense in private hospitals. This resulted in immediate transfer of almost all patients to AKUH.
The first evacuated patient arrived at AKUH at 1650 hours. According to official reports, 44 people died while 120 were injured in the incident. The total casualties presented to AKUH were 54 out of which 28 were admitted while 26 walking wounded were discharged from the ER after providing necessary treatment. Twenty three victims were brought to AKUH within an hour of the incidence and remaining casualties were transferred to the hospital over the next 12 hours.
Majority of the patients had shrapnel lacerations and multiple fractures. Two patients had associated vascular injuries, which included a posterior tibial artery laceration in one patient and a near total transection of the femoral vein in the other.

Table-1 summaries the various injuries presented by the victims who required admission at AKUH. The mean age of victims who were admitted was 17 years (range 10-40 years) of which only one was female. Two mortalities occurred at our institute; one was an early mortality due to tension pneumothorax and hypovolaemic shock, while the other late mortality was due to septicaemia.
The second incident (Chehlum: February 5th 2010) occurring exactly forty days later, included twin bomb blasts. This incident targeted a health care facility where injured were being treated, thus raising questions about the security of the medical and paramedical staff involved in rescue efforts. The terrorists first targeted a bus at Shahrah-e-Faisal carrying civilians on their way to a religious (Chehlum) procession at 1500 hours. Fourteen individuals were killed while 60 were injured in the blast.12 Charity ambulance services were quick to respond and started evacuating the dead and injured to the nearest public sector hospital and AKUH. At 1635 hours the public sector hospital itself became a victim of terrorism when another blast occurred yards away from the casualty leading to utter chaos and second wave of casualties. Most of the injured were relatives of the first blast victims, with a few paramedical staff and media personnel also involved in the incident. Overall 13 deaths were reported in the second blast while over 50 individuals were injured.13 The presence of a blast in close proximity to the emergency department paralyzed the relief efforts and all victims from the two blasts were shifted to AKUH irrespective of their injury severity.5
Due to a lack of command and control, a sudden and overwhelming influx of patients occurred at AKUH, necessitating temporary closure of the main hospital gate for half an hour, in order to force ambulances to shift patients elsewhere. This diverted further casualties to Liaquat National Hospital.5
As the hospital staff was busy managing the rapid influx of victims, the emergency department became increasingly filled with relatives of the victims and volunteers. 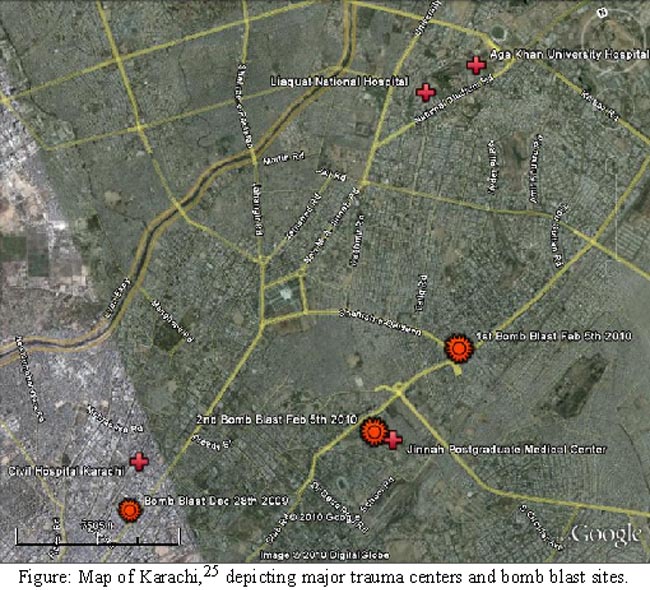 A total of 70 patients presented in the emergency room of AKUH, some came directly after the first blast while others were shifted to AKUH after the relief efforts had halted at the primary managing hospital. Out of those 70 patients, 39 were admitted under various sub specialties of surgery while 31 with minor injuries were managed and discharged. Two deaths on arrival were also noted in the ER. Two mortalities occurred at our institute, the first one was an early mortality secondary to hypovolaemic shock, while the other a late mortality was due to septicaemia and ensuing multi organ failure. Summary of the bomb blasts are shown in Table-2.

It is imperative that a comprehensive disaster plan is made for the city of Karachi, involving all stake holders including charity ambulance services, security agencies, public and private sector hospitals. Training courses for paramedics and doctors should be made mandatory to achieve professional excellence. A central command and control system also needs to be established to efficiently manage any future threats to the city.