Objectives: To determine prevalence of ecstasy use and its predisposing factors among Iranian high school female students in Tehran, capital of Iran.
Methods: In this cross-sectional study, 2350 female students of 36 high schools from Tehran, were selected by multi-stage cluster sampling to determine prevalence of ecstasy use and its predisposing factors. SPSS- version 13 was employed to conduct analysis through chi-square, fisher\\\'s exact test and logistic regression methods.
Results: The prevalence of ecstasy use was 2.3% (95%CI: 1.7-2.9%). Party was the most prevalent place of first use (65%) and access was easy for most users (63%). In multivariate analysis, smoking (P-V=0.005), alcohol use (P-V=003), use of other substances (P-V<0.001), being in relationship with boys (P-V=0.015), families without one or two parents (P-V=0.020), night spending at friends home without parents\\\' permission (P-V=0.001) were associated with ecstasy use.
Conclusion: Due to relation of ecstasy use with other substances, designed programmes should be comprehensive, with different strategies and collaboration of several sectors. The main strategies are to improve students\\\' health literacy, family support, to limit supply and access, and to legislate appropriate regulatory laws.
Keywords: Ecstasy, Women health, Adolescent, Prevalence, Iran (JPMA 61:566; 2011).

Ecstasy, the street name for the hallucinogenic stimulant 3, 4-methylenedioxy-methamphetamine (MDMA), is one of the most used substances in developed and developing countries and related health complications have been documented since last two decades.1 Brain tissue destruction, decreasing emotional capabilities and even death could happen after use of ecstasy. Various abnormalities including psychiatric, vegetative, neuro-endocrine and cognitive disorders could be expected, following MDMA-induced neurotoxin brain damage.2 Functional sequels may persist even after longer periods of abstinence. MDMA users exhibit difficulties in coding information into long-term memory, display impaired verbal learning, are more easily distracted, and are less efficient at focusing attention on complex tasks.3
News about use of this drug by adolescents and students are reported from different parts of the world and Ecstasy initiation seems to play a role in the subsequent initiation of cocaine and heroin.4 Why the youth began to use Ecstasy and which factors contribute, have been studied in different countries. Monetary and opportunity cost, but not income, significantly predicted ecstasy use and among the psychological measures, motivational cues were the strongest predictors of both use and dependence.5 Another study indicated that attitudes were associated most strongly with intention and use.6 The findings of a study suggest a pathway from early deviant behaviour to ecstasy use disorders, possibly mediated through ilicit drug experimentation in early adolescence.6
It seems that change of cultural and social norms, family problems, lack of ability to analyze the situations, lack of self esteem, lack of educational programmes for prevention, lack of scientific and research approach are factors playing an important role in expanding ecstasy abuse.5,7 Another important problem is lack of knowledge about effects and consequences of ecstasy use among college students and general practitioners.8-11
Findings of a study showed that, Ecstasy users were more likely to use marijuana, engage in binge drinking, smoke cigarettes, have multiple sexual partners, consider arts and parties as important, religion as less important, spend more time socializing with friends, and spend less time studying.4,12 Unlike other illicit drug users, ecstasy users were not academic underachievers and their satisfaction with education was not different from that of non-ecstasy users. Another study showed that multiple drug use was more frequent among users than among non-users.4,12-14 Other features that were significantly more accentuated among users than among non-users were the presence of tattoos and piercing, the frequency of attending raves and the preference for electronic music.12
Using ecstasy by Iranian women, girls and students are reported in the Mass Media and newspapers and some studies. Unfortunately, there is not enough research data about this status. According to a study, conducted by Mohtasham and colleagues, the prevalence of Ecstasy use among students was 2.4% in Lahijan, a city in Iran.15 According to Najafii and colleagues, the prevalence of ecstasy use among Iranian high school boys and girl students is 3% and 1.1%, respectively.16 They found that there was significant difference between Alcohol, Opium, Ecstasy, Cannabis and Cigarette use and sex. Higher educational levels and higher ages in boys were related to higher substance use. In addition, there was significant relationship between substance use in students and cigarette use among family members.
Considering available data, cultural context of the Iranian society, lack of data about risk factors especially for girls, this study was implemented and focused on the Ecstasy use of high school girls and its related risk factors, such as; parent\\\'s educational level, parent\\\'s occupation, history of father\\\'s unemployment, relationship with boys, physical, emotional disorders, the route of primary familiarity with ecstasy, type of school, use of other drugs, smoking, drinking alcohol, history of ecstasy use in close family members, family problems, lack of information about ecstasy and if their parents were not living. Certainly, appropriate interventions could be developed to solve ecstasy problem after determination of risk factors.

A cross-sectional method was employed to determine lifetime prevalence of ecstasy use and predisposing factors among female high school students in the city of Tehran, capital of Iran, in 2004. High school education in Iran consists of four stages; first grade; second grade; third grade; and pre-academic state. High school students enter the first grade at 15 and pre-academic state at 18. The number of high school female students in Tehran is approximately 100000, as target population of our study.
The projected sample size was 2334 pupils. The study was designed to meet 1.96, as level of confidence; 5%, as prevalence of ecstasy use based on results of other studies; and 1.25% as margin of error (N= (1.96)2 * (0.05* 0.95/ (0.01252) = 1167). Due to cluster sampling, we assumed design effect as 2 and finally, aimed to recruit 2350 pupils.
Administratively, Tehran consists of 19 educational districts and we selected 3 districts according to the list of distinct numbers, randomly. Three Selected districts; 1, 2, 15, were located to the north, center and south of Tehran with 6100, 6500 and 10200 students, respectively. The sample size of each district was calculated according to proportion of students\\\' population. In each district, 12 schools were selected by random sampling from the alphabetical list of schools. Between fifty to ninety students were selected randomly from each school proportional to the size of school\\\'s student population.
For designing the questionnaire, questions used by other similar researches in Iran, formed the main body of questionnaire. After adding new questions, Content validity was assessed by 10 experts from Ministry of Education, other relevant researchers and Ministry of Health, for appropriateness, necessity and relevance of questions. The initial plan for assessing scale reliability was to conduct a test- retest procedure with 30 participants and reporting Cronbach\\\'s alpha, but we encountered students who refused to fill the forms for the second time (probably due to being worried about revealing their personal data). For this reason, it was impossible for us to assess the reliability.
The final designed questionnaire, contained questions on demographic characteristics of students, use of ecstasy and probable risk factors, was assessed by the ethical review committee of Ministry of Education. The ethical committee approved the questionnaire and study design, however, due to ethical concerns, some information on sexual behaviours were excluded from the questionnaire.
For gathering data, Preliminary meetings were held with the directors of the schools. For each school two trained interviewers explained to the students how to complete the questionnaires. They were acquainted with the objectives of the project and verbal consent was obtained. Then, questionnaires were filled by students in a confidential manner. There was little missing data in this study which did not have any effect on the results.
After gathering the data, the prevalence of ecstasy use and the association between predisposing factors and ecstasy use was examined through univariate and multivariate analysis. Chi square and binary logistic regression were used for univariate and multivariate analysis, respectively.
Statistical package for social sciences (SPSS-version 13) was employed to conduct the analysis. Results were presented as cross-tabulations and adjusted odds ratio (OR) with 95% confidence interval (CI). 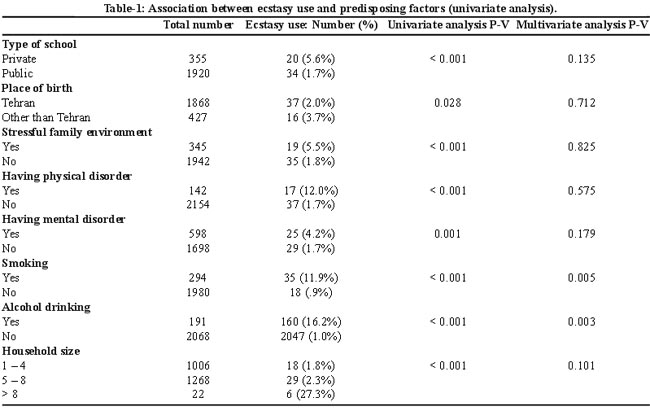 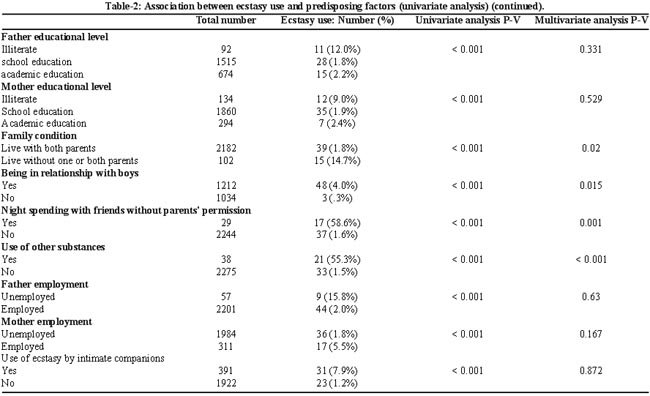 The prevalence of ecstasy abuse was 2.3% for female Iranian students in our study. Among different demographic, behavioural, familial and social factors, their relationship with ecstasy use, have been assessed. The role of behavioural risk factors such as smoking, alcohol use and other substances use is more prominent. The next important factors were familial determinants such as families without one or both parents and lack of familial supervision. Night spending with friends without parents\\\' permission is an indicator of insufficient supervision specially, in Iranian culture.
A few studies have been carried out in Iran to estimate ecstasy use. A study conducted in Lahijan, a small city in Iran, estimated ecstasy use 1.3% for female students and 2.4% for all respondents, in 2006.15 Other studies conducted in Guilan province,17 Ghazvin,18 Astara3 and Kurdistan,19 showed the prevalence of overall ecstasy use among students to be 4.2% (2.2% for females), 1.5%, 5.6%, 2.7% (1.1 % for females) respectively. In a study conducted in Turkey, in 2004, the prevalence was 1.2% for female students and 3.31 for all.20 Another study in Taiwan, from 2004 to 2006, the rate of ecstasy use was less than 1% for 11- 19 years old students.21 Some studies in developed countries point out a figure as 10% use of ecstasy in high schools of United States.4,12,22
The phenomenon of polydrug use; concurrent use of ecstasy with other substances were confirmed in our study like the other studies.1,3,20 There is more smoke, alcohol and other psychoactive drugs use for ecstasy users. Furthermore, in smoke users, tendency to begin ecstasy use in future is much more.22
Among familial and social factors, there is an important role for families without one or both parents and lack of family supervision. In a study conducted in the United States, living with both parents and effective family supervision has been mentioned as protective factors of ecstasy use.22 The relationship of ecstasy use with educational level and occupation of parents have been studied in a few studies. In Lahijan, Astara and our study, there wasn\\\'t any significant relationship between ecstasy use and education level of parents.3,15 It shows high socioeconomic state households aren\\\'t protected against the risk of ecstasy. Relationship with boys, as an inappropriate behaviour in Iranian culture for students, has been associated with ecstasy use in our study. The reason would be higher prevalence of ecstasy use among boys and their motivating role for ecstasy use. In Taiwan study, sexual relationship with boys is a predisposing factor of ecstasy use.21
Considering few conducted studies in Iran, our study with an appropriate sample size, fills an important informational gap of this area. Due to low incidence of ecstasy use among females, conducting researches with both sexes lead to insufficient power of other studies. For this reason, we limited our study to females to improve internal validity of the study. Due to specific cultural characteristics of Iran society, we employed a self-administered questionnaire. This identified the predisposing factors, not revealed in other studies, such as; being in relationship with boys; and spending nights with friends without parents\\\' permission. These factors are indicators of lack of family supervision for Iranians. On the other side, this manner of designing the questionnaire causes low external validity of study and lack of possibility of exact comparison of results with other studies.
The estimated prevalence of ecstasy use for Iranian female students is alarming. Before conducting the study, we expected lower measures. Due to association of ecstasy use with other substances, designed programmes should be comprehensive, with different strategies and collaboration of several sectors. The main strategies are to improve students\\\' health literacy and their family, to limit supply and access, and to legislate appropriate regulatory laws.

The study concluded that stressful family environment, a smaller household size, unemployment of parents, spending nights with friends without the parent\\\'s permission and use of other substances was significantly related to Ecstasy use.