Role of apache score in predicting mortality in chest ICU

Objective: To determine the first 24 hours mean values of APACHE II score for two outcomes (alive or dead) in patients admitted in chest ICUs.
Methods: A prospective study was conducted in the Department of Chest, Jinnah Postgraduate Medical Centre Hospital, Karachi from January 2009 to December 2009.
Patients of all ages and either gender admitted in chest ICU for any cause, were consecutively enrolled. All patients with incomplete records and missing variables including laboratory investigations or who had not been followed up due to any reason were excluded. Patients who were readmitted in the ICU were also excluded. The main outcomes were the first 24 hours mean APACHE II score of the sample and first 24 hours mean APACHE II score of patients who were later discharged or had died.
Results: The mean age of the patients was 53.16±19.29 years. Out of 143 participants 84 (58.7%) were males and 59 (41.3%) females. The main diagnosis included COPD with acute exacerbation 63 (44.05%), post TB fibrosis 17 (11.88%), acute severe asthma 14 (9.79%) and pneumonia 12 (8.39%) patients. The results found that 63 out of 143 patients were alive whereas 80 patients died. The mean APACHE II score on first 24 hours was 20.09 ± 7.49. The mean 24 hours APACHE II score of patients who were discharged and who died was 18.93 ± 7.19 and 22.33 ± 7.80 respectively.
Conclusion: Our preliminary results showed that it is recommended to determine the cut off levels of APACHE II scores in patients admitted with chest ICU.
Keywords: APACHE, Outcomes, Intensive care unit (JPMA 61:589; 2011).

The use of advanced techniques and technologies in the ICU now allows placing patients for prolonged ICU admission. However health care resources suggest that at admission we must identify patients who need more ICU requirement and resources, and particularly distinguish these patients from others.1-4 The high-complexity features of intensive care unit services and the clinical situation of patients themselves render correct prognosis fundamentally important not only for patients, their families and physicians, but also for hospital administrators, fund-providers and controllers.5
Various systems for assessment of severity if illness in ICUs has been established. Almost one in every 10 patients who survive intensive care will be readmitted to the intensive care unit (ICU) during the same hospitalization.6 The association between increasing severity of illness (widely calculated in ICU patients) with risk of readmission to ICU has not been systematically summarized.6
APACHE II scoring system was developed by Knaus and colleagues in 1985.7 APACHE II drives an Acute Physiological Score (APS), reflecting patients physiological status combined with scores for chronic disease state (CHI "Chronic Health Index") and Age score to develop APACHE II. The APACHE II score was primarily designed to predict the mortality of patients in ICUs but attempts have been made to apply this scoring system to patients with severe trauma, abdominal complications, COPD and acute pancreatitis.8-11
It has been found that this score accurately reflects the degree of physiological derangement and correlates with subsequent clinical course and length of ICU stay.12 The APACHE scoring system is widely used in general intensive care units (ICU) for comparative audit, evaluative research, and clinical management of individual patients.13 The number of acute organ failures has been shown to be an important determinant of prognosis in critically ill patients admitted to an ICU.14
Critical illness is a dynamic process and therefore the APACHE scoring system for outcome prediction based on a single time point does not consider changes in patients\\\' clinical status over time and their response to treatment, which limits its accuracy.15 Whether the APACHE II scoring system is still applicable to specialized ICUs is not clear, and very few data exist on predicting outcomes for patients in neurologic intensive care unit (N-ICU).16
The robust literature search reveals very few studies on APACHE II scoring conducted in Pakistan.17-19 Few international studies have shown that APACHE II scores of 35 or higher in ICUs (general/speciality) had a 100% hospital mortality rate.20 Another study conducted in a general ICU in Pakistan has shown that study results of the APACHE II score has reliably predicted an outcome of the least amount of length of stay (LOS) at a score of <10 for first 34 hours.19 However, our robust systematic search found no study conducted in patients admitted in chest ICU in Pakistan to the best of our knowledge. This provides a strong rationale to conduct a preliminary study and determine the first 24 hours mean values of APACHE II score for two outcomes (alive or dead) in patients admitted in chest ICUs, as a study has already been conducted in Pakistan on a general ICU. This would provide the future studies to develop a predictive model or determining diagnostic accuracies for this target group and population, at a specific APACHE II score cut of level.

A prospective study was conducted in Jinnah Hospital Karachi, department of chest medicine from January 2009 to December 2009. Jinnah Hospital Karachi is a government based tertiary care center, with a target population not only restricted to Karachi but majority of patients are from rural areas of Sindh province and adjoining areas of Baluchistan province.
The sample population was all patients of any age and either gender admitted in chest ICU of any cause, were consecutively enrolled. All patients with incomplete records and missing variables including laboratory investigations or who were not followed up due to any reason were excluded. We also excluded patients who were readmitted in the ICU. The sample size of the study was (N=143). The previous studies conducted have successfully used sample of less than 100 patients, therefore our sample size of (N=143) is totally justified in view of previous studies results.17-19
The ethical approval was obtained from the JPMC ethical review board. Similarly informed consent was obtained from the participant attendants before including patients in the current study project.
All the patients were admitted through emergency department of JPMC Karachi. Standard ICU treatment was given to all the patients admitted. The eligible patients were followed by the duty doctors and charts were reviewed on a regular basis from ICU admission till the end point whether death, shifted to ward or discharged. Post-ICU death was defined as death occurring between ICU discharge and hospital discharge. Routine history and physical examination followed by blood investigations including arterial blood gases were done in all patients. The admission APACHE II scores were calculated for all of the patients based on clinical and biological data obtained during the first 24 hours of ICU stay as well as their chronic health status. If a variable was measured more than once during that time, the worse value was used. We also calculated the discharge APACHE II scores for all of the patients based on values obtained during the 24 hours prior to ICU discharge. The decision for discharge from the chest ICU was made by the attending physician subjectively when the patient\\\'s physiologic status became stabilized (successful weaning from ventilator, no need of ionotropic support, conscious level enough to maintain airway, near normal arterial pH) and ICU monitoring and care were no longer necessary. All patients were discharged on schedule and were sent to general wards for further care.
Data collected included basic demographic information, severity of illness, interventions in the MICU, length of stay in the ICU and hospital, and outcome information. The severity of the illness was measured using the APACHE II classification system. The first 24 hours APACHE II score of every patient was calculated by the principal investigator. The main outcomes were the first 24 hours mean APACHE II score of our sample and first 24 hours mean APACHE II score of patients who were later discharged or died.
All the collected data was entered in SPSS software version 15. Descriptive statistics, used to summarize the categorical data, was reported in percentages like gender, post TB COPD, type II respiratory failure and COPD along with type II respiratory failure and continuous variables presented as mean ± S.D for age, APACHE II score. 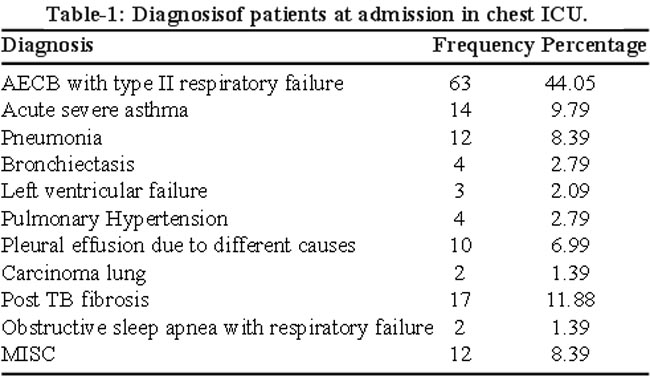 Patients admitted in intensive care unit are critically ill and need prolonged and continuous care. But developing countries like Pakistan with a high patient doctor ratio have to prioritize such patients who need more care. Many measures have been used successfully including APACHE II. But it has not been shown whether these tools would be helpful in every sub specialty ICUs including chest ICU. This is useful for future prognosis of the outcomes and prevention of bad outcomes. Our study provides the mean scores for two outcomes (discharged and alive) that would preliminary provide the researchers to develop exact cut offs of prediction.
A study by Abbott showed 255 (49.9%) admitted patients to have died in the hospital. Their results showed patients with APACHE II scores of 35 or higher to have a 100% hospital mortality.20 Based on another study results, the APACHE II score has reliably predicted an outcome of the least amount of length of stay (LOS) in the ICU a score of <10 for first 34 hours.19 Another study by Chiavone et al showed that patients with a mean age of 50 ± 19 years and an APACHE II score of 16.7 ± 7.3 had a poor prognosis.5 Our study results had similar mean age to this study indicated that mostly old age patients are affected and are usually the cases in most ICUs.
Similarly the mean APACHE II score of our study in first 24 hours was 20.09 ± 7.49 which is more than the above studies. The baseline severity of APACHE II scores clearly shows the critical nature of our admitted patients.
A study by Chen21 found that the post-ICU non-survivors had greater severity of illness at admission with a mean admission APACHE II score of 22.9 ± 5.5, compared to 18.6 ± 6.1 for post-ICU survivors. Moreover, the post-ICU non-survivors had a higher mean discharge APACHE II score (20.4 ± 6.4) than that of post-ICU survivors (13.7 ± 5.8).21 However our study showed that patients who were later discharged had a mean APACHE II score of 18.93 ± 7.19 whereas in patients who later died, the mean APACHE II score was 22.33 ± 7.80. The above differences in APACHE score may be because the patients were in different ICUs. It also shows the need of cut off levels for the region as well as specialties.
Limitation:
The limitations of our study was not using proper diagnostic or predictive tools or using regression techniques. We did not perform any correlation becasue this was a preliminary study and first of its kind conducted in any chest ICU of Pakistan using APACHE II. Therefore no comparision could be made and other sophisticated statistical techniques employed. Our main objective was only to determine the mean value of APACHE II score for the outcomes (discharged and dead). The other limitation which actually formed the basis of rationale for our study; was limited literature addressing this issue in the target population and setting of chest ICUs. Even internationally we were unable to find sufficient data addressing this particular setting.

Our results provide the mean of patients who were successfully discharged from ICU with lower APACHE II scores as compared to patients who expired. In the light of above preliminary findings and contrasting results in different settings and specialties, it is recommended to determine the cut off levels of APACHE II scores in patients admitted in chest ICU.