WHO defines antenatal care as a dichotomous variable, having had one or more visits to a trained person during the pregnancy.1 It includes routine follow up provided to all pregnant women at primary care level from screening to intensive life support during pregnancy and up to delivery.
Lack of antenatal care, especially in rural areas of Pakistan, is a leading cause of maternal and foetal mortality in pregnant women.2,3 The number of women using antenatal care is low in most areas and needs to be improved for the betterment of the people.
Many variables can influence the use of antenatal care facilities including literacy levels, level of awareness regarding the importance of antenatal care, number of facilities in the area, distance from facility, socioeconomic status etc.
The purpose of this study was to determine the frequency of women of reproductive age (15-45years) who avail antenatal care facilities in Nurpur Shahan and identify the various factors that affect this.

A cross sectional survey was carried out by the students of Shifa College of medicine in the rural settlements of Nurpur Shahan in Islamabad in January 2010. A pre-designed questionnaire was used which was originally designed in English but later translated to Urdu. All questions were asked in the local language.
The independent variables in the study were number of pregnancies, abortions, stillbirths, number of children, number of rooms, total family income,occupation of wife, occupation of husband, education of wife, education of husband, number of facilities in the area, type of facility, distance from facility, frequency of visit by LHW, permission to visit the facility, decision maker regarding utilization.
The dependent variable was awareness about antenatal care and its utilization. Awareness was judged by asking if the participants knew what antenatal care was and about its importance. They were also asked if they were aware that women should be checked by a trained health professional atleast once during pregnancy.
Epi info 3.5 was used to calculate sample size for an estimated 35,000 population of women of child bearing age with 56% taken as factor (utilization of antenatal care) at 95% confidence interval. Sample size came to be 374. For contingencies sample size was inflated by 10%. Final sample size was calculated as 390.
Systematic random sampling was used in which the 1st house and then every 4th house (8,12etc) was chosen to be surveyed. Married women of reproductive age (15-45) who were currently pregnant or had been pregnant at least once, were interviewed.
The information and data collected was analyzed using SPSS version 10.0. Frequency tables were used for categorical variables. Cross-tabs and Chi- square tests were used for appropriate variables.
Ethical considerations included taking informed consent of all the participants in written. The confidentiality of the data was ensured and clearance was obtained from Shifa College of Medicine\\\'s ethics review committee.
The response rate for the study was high since previous studies had been carried out in the area and the residents were familiar with the concept of research programmes. Where the occupants were unavailable or did not consent we moved on to the next house in the series until the required sample was attained.
The mean age of the women was 33.3 ± 8.9 years. There were 380(97.4%) housewives, 375 (96.2%) were currently married with the remainder either widowed or divorced. Of the total, 200 (51.3%) women were illiterate, 127 (32.6%). had received formal education below matric, 54 (13.8%) had passed their matriculation while only 8 (2.1%) had received postgraduate education. The mean income for a household was Rs.7756.41 ± 5519.73.
In a sample size of 390 women, 343 (87.4%) were aware of antenatal care and its importance. In accordance the level of utilization was 330 (84.4%). Majority of people named a local dispensary as only facility in the area at an average distance of 10 to 15 min. The second facility was a government hospital over 20 min away.
The lady health worker does not frequent the area.
A total of 178 (53.3%) women went to government hospitals during pregnancy but the number of those delivering here decreased to 154 (40.5%). On the other hand, the number of deliveries at home, in the presence of a dai, sharply increased to 122 (32.1%). 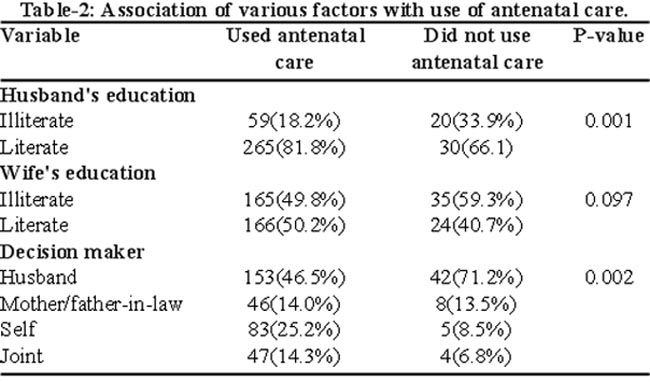 Our study showed that although women visited the hospital during pregnancy many still preferred to have the delivery at home in the presence of an unqualified Dai.
Amongst the women who did not use antenatal care 60% did not have permission and 25% were ignorant about antenatal care facilities or their importance. This may be due to social differences in the areas with Nurpur Shahan being more conservative.
Our study also found a significant relation between the literacy of the husband and utilization of antenatal care. However, amongst those who did not use antenatal care the number of literate husbands was again higher. This may be due to the fact that the awareness level about the importance of antenatal care in Nurpur Shahan was high and even the illiterate knew about it.

Knowledge of first aid and basic life support amongst medical students: a comparison between trained and un-trained students

Stem cells and tissue engineering in dentistry — a Myth or Reality