The prevalence of type 2 diabetes mellitus (T2DM) is on the rise worldwide and Pakistan is projected to be the fifth country with largest number of these patients by the year 2030.1 Sub-clinical chronic inflammation occurs many years before the onset of the disease.2 Systemic inflammation markers are raised in serum such as interleukin-6 (IL-6), which is a pro-inflammatory cytokine.2 Obesity is no more considered as inert condition and is considered to be a state of adiposities in which infiltrated macrophages are the source of most of the IL-6 in adipose tissue.3 Adipocytes contribute 35 per cent of circulating IL-6 which explains the association of high serum IL-6 levels with obesity and raised body mass index (BMI).3,4 IL-6 acts by Janus kinase-signal transducer and activator of transcription (JAK-STAT) pathway and contributes to insulin resistance by inhibiting phosphorylation of insulin receptor as well as causing proteasomal degradation of insulin receptor substrate (IRS) 1 and 2.5 IL-6 itself causes rise in serum insulin levels by augmenting release of Glucagon-like peptide (GLP) from intestinal cells as well as pancreatic alpha cells aggravating the hyperinsulinism in T2DM.6
IL-6 C-174G polymorphism in T2DM was first reported in 2003 among Native Americans and Spanish Caucasians showing that GG phenotype was significantly common in diabetics than non-diabetic subjects.7 Many studies have reported the positive association of IL-6 C-174G with T2DM and with increased serum levels leading to insulin resistance (IR).8,9 These findings have been challenged by other studies.10,11 IL-6 -174 G allele is associated with increased IL-6 gene transcription and augmented IL-6 messenger ribonucleic acid (mRNA) in in vitro animal studies15 as well as in vivo human studies.12,13 Transcription of IL-6 is cell-specific and is strongly influenced by transcription factors such as nuclear factor (NF)-kB, NF-IL6 and cellular retinol-binding protein (CRBP), Fos/Jun and glucocorticoids receptor.14 Polymorphism may directly or indirectly affect this interaction and may result in inter-ethnic variations.
The current study was planned to explore the possible association of IL-6 C-174G single nucleotide polymorphism (SNP) with T2DM in Pakistani population. Such a study has not been reported yet. Correlation of the presence of risk allele with serum IL-6 levels, BMI, lipid profile, blood sugar fasting (BSF), serum insulin and insulin resistance was also determined.

The case-control study was conducted at the Military Hospital, Rawalpindi, the Centre for Research in Experimental and Applied Medicine, Army Medical College, Rawalpindi, and the Institute of Biomedical and Genetic Engineering, Islamabad, Pakistan, from June 2012 to December 2013, and comprised T2DM patients and healthy controls. Approval was obtained from the ethical committee of the relevant institutions and written informed consent was obtained from the participants in accordance with the Declaration of Helsinki. The subjects comprised patients diagnosed with T2DM according to the World Health Organisation\\\'s (WHO) criteria, and healthy controls. All the participants belonged to Pakistani Punjabi Rajput ethnic group.
Plasma glucose was measured by glucose oxidation method, serum total and high-density lipoprotein (HDL) cholesterol and triglyceride (TG) were estimated by enzymatic method (Vitalab Selectra E). Plasma fasting insulin levels were measured by enzyme immunoassay (EIA) method (Life Technologies, Frederick, United States). Insulin resistance (IR) was calculated by \\\'homeostatic model of assessment of insulin resistance\\\' (HOMA-IR). Quantitative measurement of IL-6 was done by enzyme amplified sensitivity immunoassay (EASIA) method (BioSource kit, Nivelles, Belgium). The intra-assay and inter-assay coefficient of variation for IL-6 was 5.6% and 7.5%, respectively, and the minimum detectable concentration was 2 pg/ml. Standard laboratory procedures were followed for all biochemical tests.
Deoxyribonucleic acid (DNA) was extracted from blood cell by standard \\\'phenol and chloroform\\\' method. Genotyping of samples were obtained for IL-6 C-174G (rs 1800795) SNP by polymerase chain reaction-restriction fragment length polymorphism (PCR-RFLP) method and was confirmed on DNA sequencing. Two replicates of positive and one replicate of negative controls were included in each PCR. For PCR-RFLP, allele-specific primers for PCR-RFLP for IL-6-174 polymorphism were designed at link: (primer3.ut.ee). A 564-bp fragment of IL-6 gene was amplified. The forward (F) and reverse (R) primer sequences were IL-6-174F:
5\\\'-CTGCGATGGAGTCAGAGGA-3\\\' and IL-6-174R: 5\\\'- AGTTCATAGCTGGGCTCCTG-3\\\' respectively. The reaction was done in a final volume of 20µl containing 2µl of 10X PCR buffer without magnesium chloride (MgCl2) (Fermentas, Lithuania), 1µl of 25mM MgCl2 (Fermentas, Lithuania), 1µl 2mM deoxynucleotides (dNTPs) (Fermentas, Lithuania), 0.1µl of 5U Taq DNA polymerase enzyme (Fermentas, Lithuania), 1µl of 20µM of forward and reverse primers, 2µl of 40ng/ µl human genomic DNA and volume of the reaction was made up to 20µl with autoclaved deionised water. DNA was denatured for 5 minutes at 95°C and then subjected to 35 amplification cycles. Each PCR cycle comprised of denaturation at 95°C for 45 seconds, annealing at 60°C for 45 seconds and extension at 72°C for 45 seconds followed by a final extension at 72°C for 10 minutes. Products were held at 4°C.
In the next step, 10 µl of 564-bp PCR products, one µl of restriction enzyme N1AIII (Fermentas), 3 µl of 10 X buffer and 16 µl of deionised water was mixed to make a total volume of 30µl reaction mixtures. The reaction mix was incubated at 37°C for 16 hours on a shaking water bath and was then analysed using 2.5% agarose gel. GG homozygotes were resolved as 4 bands at 233, 173, 129 and 29bp fragments; CC minor alleles were resolved as 173, 129, 122, 111 and 29bp fragments and CG heterozygotes were revealed as 233, 173, 129, 122, 111 and 29bp fragments. Validation of genotypes by PCR-RFLP were confirmed by DNA sequencing (Applied Biosystems®3130 Genetic Analyser by Life Technologies; US) done on samples selected randomly.
The distribution of data was estimated by applying test of normality; Kolmogorov-Smirnov test. Continuous variables with Gaussian distribution of both groups were compared using independent Student\\\'s t-test. Bivariate and stepwise multivariate linear regression analyses were performed to estimate the correlation between various variables. Variables with non-Gaussian distribution were compared using Mann-Whitney U test and their median and inter-quartile range (IQR) were calculated. Genotypes and allele frequencies were estimated and odd ratios (OR) were calculated and compared on Fisher\\\'s exact test for risk estimate between study and control groups. The distribution of genotypic frequencies of IL-6 within the Hardy-Weinberg equilibrium was determined using Pearson\\\'s chi-square test. The results were graphically illustrated by drawing triangular ternary plot through "De-Finetti" diagram. Association between gene polymorphism with serum level, BMI, lipid profile, BSF, serum insulin levels and insulin resistance were assessed by analysis of variance (ANOVA) and post-hoc Tukey\\\'s test. Values were considered statistically significant if p<0.05. Data was analysed using SPSS 16. 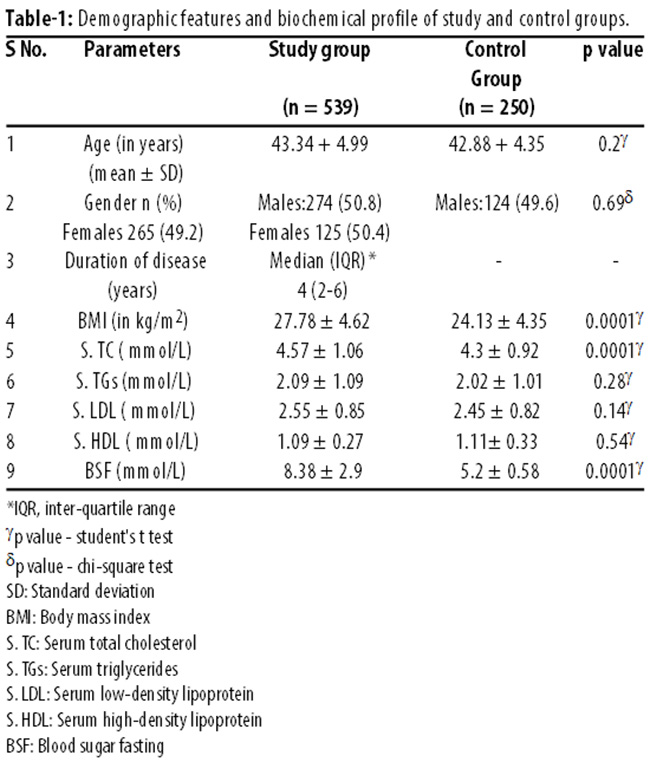 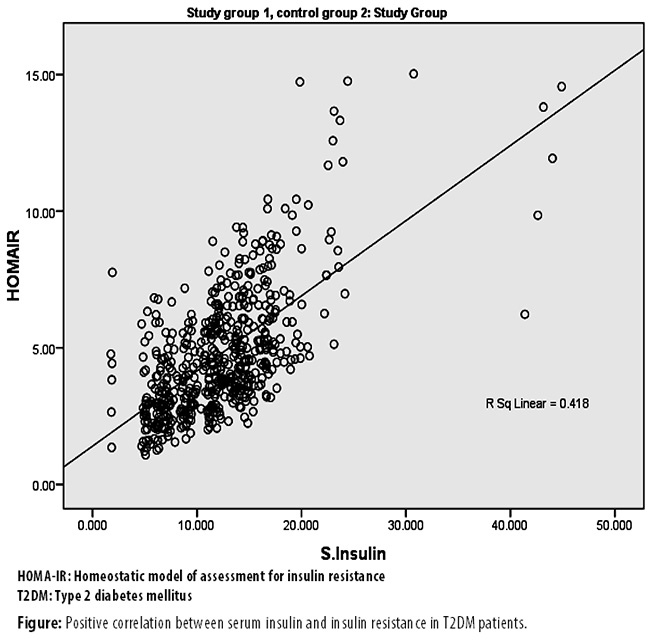 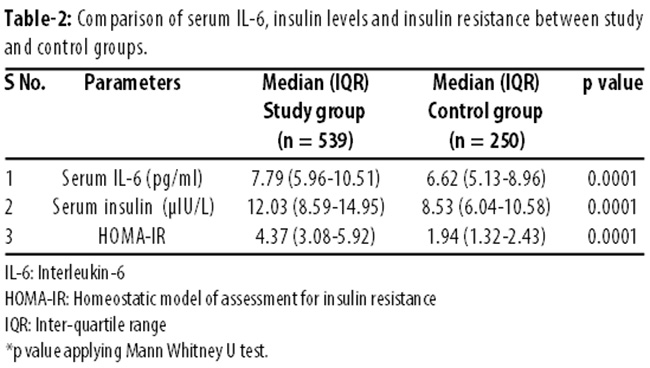 There is increasing evidence of role of low-grade inflammation in insulin resistance in T2DM. Various studies indicate that IL-6 C-174G SNP is associated with increased serum levels, dyslipidaemia, low BMI, BSF, serum insulin and insulin resistance. These findings are challenged by other studies. There are inter-ethnic variations in these associations. No study so far has reported these associations in Pakistani population.
The present data shows 93.1% frequency of risk allele in Pakistani population. The presence of G allele variant in IL-6 gene at -174 position in promoter regions rendered the risk of T2DM 3.22 times more in our population. The positive association was also reported in other ethnic groups.3,4 Very limited studies are reported from South Asian countries; only a few studies in Indian population revealed this SNP to be significantly associated with T2DM.9 Although sufficient data indicates the positive results, this association with T2DM has been challenged by many studies.4,15 Some studies reported even contrary results in which major allele C was found to be associated with T2DM.16,17
The cause of inter-ethnic variations in association of IL-6 -174 SNP with T2DM is not known. There is gene-gene and gene-environment interaction which influences this association. There is always the possibility that IL-6 -174 SNP is not directly responsible for insulin resistance and there is linkage disequilibrium with any other responsible variant in distant regulatory site in promoter region, explaining the inter-ethnic variations.
Adipose tissue is the source of 30% of IL-6. Some studies suggested the role of adiposity in modulating the association between IL-6 genetic variability with T2DM risk.4,18 In overweight impaired glucose tolerant (IGT) Finnish subjects, simultaneous polymorphism in IL6 C-174G and tumour necrosis factor alpha (TNF-a) G-308A showed a 2.2-fold increase in risk of T2DM than neither of SNP, although risk was not higher in simultaneous SNPs as compared to G-308A SNP alone showing a gene-gene interaction.19 In our study, TNF-a G-308A SNP was not estimated and effect of simultaneous polymorphism could not be ascertained.
Individually, IL-6-597 G/A, TNF-a -308G/A and IL-10 -592C/A do not show any association between SNP and risk of T2DM in Indian population but genotypes combination of IL-6-597 GA and TNF-a -308 GG increased the risk of T2DM up to 21 times and triple combination of IL-6-597 AA, TNF-a -308 GG and IL-10-592 CA increased the risk to 314 times. The presence of minor allele A in all 3 genes increased the risk up to 1.41 times in Indian population showing strong gene-gene interaction.20 The presence or absence of certain haplotypes in some ethnic groups may be responsible for positive association or lack of it with T2DM. Our study reported for the first time the allele frequency of IL-6 C-174G SNP in Punjabi Rajput Pakistani Asian patients and positive association with T2DM.
IL6 C-174G SNP functionally affects IL-6 promoter activity leading to increased transcriptional activity and raised serum IL-6 which is a contributing factor in pathogenesis of T2DM.10,21 Varying results are reported in this regard. Various IL-6 producing cell types may respond differently to various risk factors like inflammation, obesity, insulin resistance or yet unidentified parameters and thus altering the impact of SNP. This hypothesis is supported by the finding that IL-6 -174C allele was associated with significant elevation of IL-6 expression after coronary artery bypass surgery, although IL-6 levels were same in both genotypes before surgery. It indicates that probably stress led to an altered impact of SNP on IL-6 expression.22 Similarly, C allele was found to be associated with reduced serum levels of IL-6 after long-term exercise. No difference was reported between genotypes before exercise training programme indicating gene-environment interaction.8,23 These interactions may be the cause of inter-ethnic variations.
On multivariate regression analysis in our study, serum IL-6 was a strong predictor of IR along with raised BSF and serum insulin in obese T2DM patients in our study (r=0.91, p<0.03). On sub-grouping the study and control group based on genotypic profiling; CC, GC and GG genotypes did not differ from each other in relation to IR and serum insulin levels. Our findings were supported by other studies.4,19,24,25 Contrary results are also reported with positive association of SNP and IR.7,12 IL-6 -174 SNP was found to be associated with insulin (F) in some studies23 while in our study this association was insignificant.
A recent study indicates the higher BMI in IL-6 CC genotype but greater reduction in weight in CC genotype as compared to GG genotype by low-fat diet/virgin olive oil diet for 3 years. The effect of gene variant on obesity indices was reversed by low-fat diet indicating a gene-nutrient interaction.11 The gene-gene and gene-diet interaction may be the cause of inter-ethnic variations in association of genotypes with BMI and dyslipidaemia.
Future studies with larger sample size of all ethnic groups of Pakistani population are required to reach a definite conclusion about the prevalence of this SNP in our country. There are co-existent multiple SNPs in promoter region of IL-6 gene which can influence the impact of this -174 SNP at transcription and translation, hence the serum levels. The study of all the haplotypes of IL-6 gene was beyond the scope of our study. Moreover, there might be undefined/undiscovered SNPs that could be held responsible for altered functions and expressions of studied SNP. Our findings can be substantiated by further studies on larger sample size.

We are grateful to Mr. Aqeel Younis for his contribution to the study.
Disclaimer: None
Conflict of Interest: None
Source of Funding: The study was supported by a grant from the Higher Education Commission (HEC), Pakistan.

Fistulotomy versus fistulectomy for simple fistula in ano: a retrospective cohort study