Gout is a chronic rheumatic disease resulting from accumulation of monosodium urate crystals in tissues. The most important risk factor for the disease is hyperuricaemia. Precipitation of uric acid in the joint in the form of monosodium urate crystals is the main factor responsible for triggering attacks of arthritis. Tophi occur as a result of urate crystals that precipitate into joints and surrounding tissues. Tophi can erode the bone where they are located and cause compression in soft tissue due to a mass effect. The following case report describes a case of cubital tunnel syndrome developed in association with tophaceous compression and resolved with surgical decompression in a patient with chronic gouty arthritis.
Keywords: Gout, Cubital tunnel syndrome, Entrapment neuropathy, Uric acid.

Gout is a chronic rheumatic disease generally seen in men over 50 years and is characterised by acute monoarthritis beginning from the first metatarsophalangeal joint.1 The prevalence is reported to be 9% in men and 6% in women older than 80 years.2 Factors triggering acute attacks of arthritis include high protein diet, and use of alcohol and diuretics. Tophi seen in long-term disease are generally located in the elbow, forearm, Achilles tendon or the external ear, and can give rise to various symptoms by compressing the surrounding tissues.3,4 There are only a few cases reported in literature regarding cubital tunnel syndrome caused by tophi in the elbow.3-5 Even though conditions such as pain, numbness and muscular weakness in the forearm are rare in patients with gout, cubital tunnel syndrome caused by tophaceous compression should still be considered

A 63-year-old male patient with multiple co-morbidities such as hypertension, diabetes mellitus and coronary artery disease, presented to our clinic with arthritis in multiple joints in September 2014. He had been diagnosed with gout 15 years back but had not been followed up and treated regularly. He had past history of surgery due to duodenal obstruction one month prior after which the joint pain had subsequently worsened. Physical examination revealed swelling and increased temperature in both knees, both ankles and the first metatarsophalangeal joint. Mobility in the tibiotalar joint of the left foot was significantly reduced and painful. Tophi were present in bilateral second metacarpals and the left elbow. The patient described numbness in the region of the left ulnar nerve supply, but no sensory loss nor muscle weakness were noted. Laboratory investigations included erythrocyte sedimentation rate (ESR) of 115 mm/h (N:0-20 mm/h); C - reactive protein (CRP) of 23.65 mg/L (N:0-5 mg/L); urea 70.4 mg/dl (N:7-25 mg/dl); creatinine 1.51 mg/dl (N:0.5-1.40 mg/dl); and uric acid levels of 8.6 mg/dl (N:2.6-6 mg/dl). Magnetic resonance imaging (MRI) of the left elbow joint revealed tophi compressing the ulnar nerve (Figure). 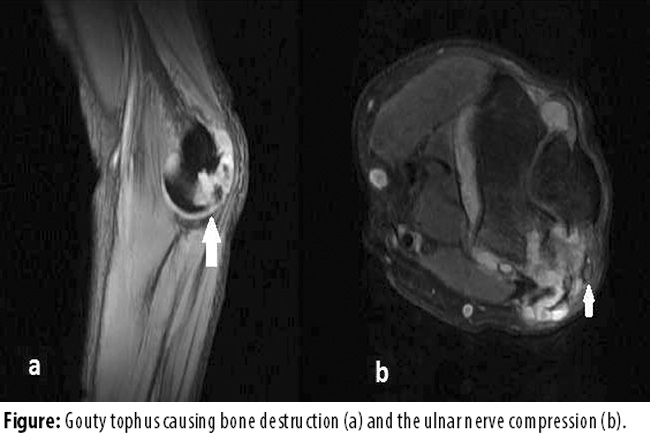 Ulnar entrapment neuropathy affecting both sensory and motor branches was determined by electromyogram (EMG) and nerve conduction studies. Nerve conduction velocity was 39 metres per second (m/sec) on the left and 55 m/sec on the right. Joint symptoms were severe and non-steroidal anti-inflammatory drugs were contraindicated. The patient was therefore started on steroid therapy and the tophi were later surgically excised. Ulnar neuropathy-related symptoms resolved entirely 2 months after treatment and no recurrence was observed at follow-up which lasted for one year.
Formal informed and written consent was taken from the patient prior to the reporting of the case.

Gout occurs due to excessive production or decreased excretion of uric acid. It is characterised by recurring attacks of arthritis and deposition of monosodium urate crystals in the tissues. Although tophus is generally anticipated in the late period, there are reports in literature of presentation with tophi even on the first attack.6 Tophi are typically located in the olecranon bursa, Achilles tendon, first metatarsophalangeal joint and ear, although atypical locations such as the tarsal tunnel, second metacarpal and wrist flexor tendons have also been reported.5,7
Data concerning entrapment neuropathies associated with gout generally involve carpal tunnel syndrome. The syndrome in these patients develops in association with either tophaceous compression or gouty tenosynovitis.8,9 Entrapment neuropathies other than carpal tunnel syndrome in gout are rare and are generally reported in association with tophaceous compression.5 Cubital tunnel syndrome, the second most common entrapment neuropathy of the upper extremity, occurs due to compression of the ulnar nerve in the elbow. Symptoms include pain in the elbow and forearm, and paraesthesia which worsen at night in the 4th and 5th fingers. Symptoms are aggravated by elbow flexion.8 Weakness, atrophy, and claw hand posture in the fingers may also be seen in advanced cases. Tinel\\\'s and Froment\\\'s signs may be positive.9 Diagnosis in patients with positive physical examination findings is made with EMG/NCS. Our patient had paraesthesia in the 4th and 5th fingers, however, no muscular atrophy or claw hand deformity was observed.
Nakamichi and Akizuki described tophi causing cubital tunnel syndrome.3,4 To the best of our knowledge, the available data are limited to these cases. As in our case, Nakamichi et al. determined tophus in the distal cubital tunnel. They reported an easing of symptoms with surgical resection of tophus that was not seen at X-ray.3 Akizuki et al. determined deposition in the epitrochlear groove. They recommended surgical resection as the first therapeutic option for preventing irreversible nerve damage. In addition, they emphasized the need for medical treatment for the prevention of recurrences.4 Jacoulet et al. reported double tunnel syndrome involving cubital and carpal tunnel syndromes.11 Carpal tunnel syndrome was associated with gouty tenosynovitis, and cubital tunnel syndrome and with epitrochlear deposition. They reported that the patient\\\'s paresthesia symptoms disappeared following neurolysis of both the ulnar and the median nerve, while atrophy of the intrinsic muscles remained unchanged. We performed EMG/NCS and MRI of the elbow for nerve compression probably caused by tophi visible at elbow examination and for differential diagnosis. The region of entrapment was identified with EMG, while ganglion cyst, osteophyte and lipoma differentiation was achieved with MRI"

Gout-related tophi leading to entrapment neuropathy are rare. Chronic gout patients presenting with cubital tunnel syndrome findings should be cautiously evaluated for tophaceous compression. Surgical decompression of the ulnar nerve leads to amelioration of symptoms. Early diagnosis is important in order to prevent damage to the intrinsic muscles of the hand and avoid complications.
Disclaimer: None.
Conflict of Interest: The authors declare no conflict of interest.
Funding: None to declare.