Objective: To assess ten-year and lifetime estimated cardiovascular disease risks in non-atherosclerotic subjects.
Methods: This cross-sectional study was carried out at the National Institute of Cardiovascular Disease, Karachi, from July 2014 to March 2015, and comprised male and female subjects with multi-ethnic background, aged 20-79 years and having non-atherosclerotic disease. SPSS 22 was used for data analysis.
Results: Of the 437 participants, 174(39.8%) were men and 263(60.2%) were women. The overall mean age was 42.65±11.45 years. The mean age of men was 43.3±12.1 years and that of women was 42.2±10.8 years. Moreover, ten-year and lifetime risk assessment rates were higher in men (50[28.2%] and 86[49.4%] respectively) compared to women (28[10.6%] and 84[31.9%], respectively).
Conclusion: Urdu-speaking Pakistanis were found to be at higher risk from atherosclerotic cardiovascular disease.
Keywords: Cardiovascular disease, ASCVD risks, Pooled cohort equation, Pakistani population. (JPMA 67: 494; 2017)

Cardiovascular disease (CVD) is one of the major causes of death across the world.1,2 South Asians have relatively high risk of CVD compared to other regions and its prevalence is higher in young age groups and women.3,4 Prevention requires major action to reduce the adverse consequences of risk factors for cardiovascular disease. For assessment of CVD risk, a number of risk assessment tools are available such as Framingham risk score (RiskFRS),5 Prospective cardiovascular Munster (PROCAM) score,6 systemic coronary risk evaluation (SCORE),7 QRISK,8 World Health Organisation (WHO) risk tool (RiskWHO)9and Joint British Societies risk tool (RiskJBS).10 However, these tools misjudge the atherosclerotic cardiovascular disease (ASCVD) risk among South Asians.11,13Unfortunately, the large proportion of the adult population with ASCVD presents without clinical signs or symptoms. For the primary prevention and minimising the risk, the strategy followed by the American Heart Association (AHA) in 2013 guidelines has introduced the pooled cohort equation, i.e. risk estimator published jointly by the American College of Cardiology (ACC) and the AHA (Risk ACC/AHA).14,15 The new equation now predicts 10-year risk of both coronary heart disease (CHD) and stroke (ASCVD). The pooled cohort equation includes a list of classical cardiovascular (CV) risk factors, namely, age, gender, high-density lipoprotein (HDL)-cholesterol, systolic blood pressure (SBP) and whether the individual is treated for hypertension, race, smoking status and diabetes status. When risk is calculated, the output includes the 10-year and lifetime risks for developing a first cardiovascular event, namely nonfatal myocardial infarction, nonfatal stroke, fatal CHD or fatal stroke. The score is specifically applicable to those without evidence of cardiovascular disease and those without unusually high risk (e.g. familial hypercholesterolaemia).14 The current study was planned to estimate 10-year and lifetime risk in non-ASCVD subjects with diverse ethnic backgrounds.

This cross-sectional, observational, single-centre study was carried out at the National Institute of Cardiovascular Disease (NICVD), Karachi, from July 2014 to March 2015. The study was conducted using International Council on Harmonisation of Technical Requirements for Registration of Pharmaceuticals for Human Use (ICH) good clinical practice (GCP) guidelines.16 The sample size was estimated with 95% confidence level and 5% margin of error with an expected population at risk of 10,000. Both male and female subjects aged 20-79 years, with presence or absence of diabetes with or without hypertension (if hypertensive whether on treatment or not), and those with systolic blood pressure and presence or absence of smoking were included. Subjects with clinically evident CVD and ASCVD, and pregnant and nursing mothers were excluded. The study was approved by the institutional ethics committee, and all participants gave informed consent.
Demographic, clinical and para-clinical data was recorded and completed by trained cardiologist residents. Participants\\\' anthropometric and blood pressure (mm Hg) measurements were taken. Blood pressure was measured by switch automatic mercurial sphygmomanometer (Omeron). Body mass index (BMI) was calculated as weight (kg) divided by height (m2). Waist circumference was measured at 2-3cm above the umbilicus, or waist circumference at the middle of the nipple and top of thigh. BP was measured in a sitting position and resting blood pressure was measured 3 times using an automated blood pressure monitor using the mean of last two readings for analysis. We define hypertension as systolic blood pressure > 140 mm Hg. Blood pressure categorisation was made without regard to the use of antihypertensive medication. Electrocardiography (ECG) findings were collected on the ECG machine as per the standard guidelines. For biochemical test, blood was drawn at the baseline examination after an overnight fast (12 hours), for cholesterol (total cholesterol, HDL) and triglyceride measurements. Cholesterol was determined according to the ATP-III guidelines.17 We defined dyslipidaemia, as total cholesterol > 240 mg/dl, HDL cholesterol < 40 mg/dl (for persons with or without diabetes).
The Ethnic group of Pakistan population is defined as18
u Punjabi: Ethnic group from the province Punjab (Pakistan) also known as the land of five rivers. Punjabi language is spoken throughout the province of Punjab.
u Pushtuns: They are generally referred to as Pathans, are the natives of West Indus River. Their unique code of conduct is based on tribal structure and referred to as Pushtunwali.
u Sindhi: Sindhis are the inhabitants of Sindh (Pakistan), the province exists along the Indus River and got exposure due to Indus Valley Civilization.
u Baluchi: The people belonging to the land referred to as Baluchistan (Pakistan), situated on the South West side of Pakistan. It is the largest province of Pakistan The population of Baluchistan constitutes 6% of Pakistan\\\'s total population.
u Urdu Speaking: After Indo-Pak partition, communities migrating from South East Asia (India). The uniting factor is the Urdu language
u Miscellaneous: Rest of people from northern areas of Pakistan including Gligit, Baltistan, Kashmir and others.
Traditional risk factors were defined as:19 Obesity: BMI > 30; Overweight: BMI=>25; Abdominal obesity: Waist to hip ratio (w/h) >1 in male and >0.8 in female; Dyslipidaemia: triglycerides >150 and/or cholesterol >200 and/or low-density lipoprotein (LDL) >160 and/or HDL <40 for males and <50 for females and/or history of taking anti-hyperlipidaemia drugs; Hypertension: currently taking antihypertensive medications and/or SBP >140 and/or diastolic blood pressure (DBP) >90, by taking the average of 3 measurements; Diabetes mellitus: history of using hypoglycaemic agents and/or fasting blood glucose (FBG) >126 and glucose tolerance test (GTT) >200; and smoking: consumption of 10 cigarettes per day, at least for 3 months.
The 10-year predicted risk for ASCVD events among the participants was estimated using pooled cohort equations. The study samples were assessed into 2 groups: those with low predicted 10-year risk (10-year risk <7.5%) and those with high predicted 10-year risk (10-year risk >7. 5% or diabetes mellitus).
The lifetime predicted risk for ASCVD was estimated using a previously published algorithm based on the aggregate risk factor burden. The lifetime predicted risk for ASCVD was again divided into two lifetime risk groups i.e. <39% (life expectancy was 10 years as per pooled cohort so only lifetime risk was calculated) and >39% (10-year risk was calculated due to the factor of age by equation).14
Statistical analysis was done using SPSS 22. Quantitative variables like age, gender, BMI and total cholesterol were presented as mean and standard deviation (SD). Qualitative variables like diabetes, smoking and hypertension were presented as frequencies and percentages. Data was controlled for effect modifiers also. 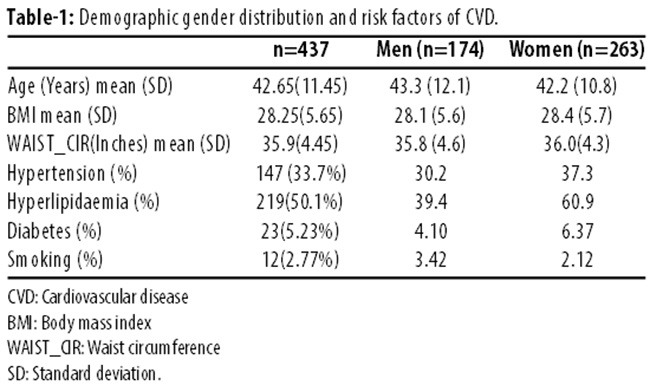 Various studies have been conducted in the West which have underestimated CVD risk by risk assessment models in the individuals of South Asian origin.20,21 Our estimation of 10-year and lifetime ASCVD in non-atherosclerotic Pakistanis was in line with an earlier study involving South Asians based in America.19 The cardiovascular risk scores (pooled cohort equation) assessed in this study is a contemporary model used in other countries as well. Using pooled cohort equation in Pakistani without ASCVD, 10-year risk was found to be more in males (28.2%) as compared to females (10.6%) whereas lifetime risk was 49.4% in males and 31.9% in females. Namratha et al. in their Mediators of Atherosclerosis in South Asians Living in America (MASALA) study found 10-year predicted risk in males and female to be 49% and 13%, respectively.22 The findings of the MASALA study were different as compared to Pakistani population as different South Asian populations were included. Monira Hussain et al.23 stated that migration was associated with changes in lifestyle, psychosocial interaction, dietary habit, climate, culture and living conditions, which ultimately may influence the CVD risk profile. There is a concern about the use of 7.5% number in a pooled cohort equation to determine the use of statin therapy so that more patients will be treated with this drug.24
In our study, we found significantly higher BMI in both genders in high-risk groups. According to the AHA, obesity defines as a major risk factor for CVD.25 Unfortunately, the risk is further stressed when obesity has a predominant abdominal component.26 In the current study, waist circumference in the high-risk group was significantly higher when compared to the low-risk group. The study also evaluated estimated risks in different ethnic groups. As per the results, moderate intensity statins were required in Urdu speaking, Punjabis and Sindhi participants who had 5-7% cardiovascular risk as compared to other racial groups.
In previous studies, significant differences in SBP and total cholesterol are strong risk factors associated with the Asian population. For SBP, this is partially explained by a stronger association between blood pressure and cerebrovascular events, which occur more frequently than coronary events in many Asian populations.27
Pooled cohort risk equations can be useful in clinical practice to predict risk estimates and to observe disease incidence. In the reasons for geographic and racial differences in stroke (REGARDS) study, over-prediction of atherosclerotic cardiovascular disease risk was noted in short-term follow-up in multi-ethnic atherosclerosis patients. The predicted atherosclerotic cardiovascular disease risk was reported to be systematically higher (25%). A second potential reason for the reported overestimation of atherosclerotic cardiovascular disease risk using the pooled cohort risk equations is the high prevalence of statin use in contemporary cohorts.28 At baseline, 29.5% of the REGARDS participants with a 10-year atherosclerotic cardiovascular disease risk of 10% or greater, the group of overestimation of atherosclerotic cardiovascular disease risk has been most pronounced, were taking statins. However, the pooled cohort risk equations were well calibrated in the subgroup for which these equations were designed to be used, providing assurance of their clinical utility.
On the basis of risk estimation of data, the South Asian population is at risk. This study provides important and new information in South Asian population with the help of pooled cohort equation.
One of the strengths of this study is that it was the first ever study to report the cardiovascular risk calculated by pooled cohort equations in different ethnic groups who did not have any known cardiac event.
However, there were limitations as well. This study is limited to only Pakistani ethnic groups. With language barriers, the issue was the importance of health confidentiality, reliability and quality. With no known diseases and symptoms, subjects were not willing to participate, which limited the sample size, follow-up, and positioned the patients who were at high risk.

Urdu-speaking Pakistanis were found to be at higher risk from ASCVD. Risk prediction is significant to know for avoiding the silent death. Early recognition of CVD risk factors, adoption of a healthy lifestyle and appropriate pharmacological therapy in high-risk population are the need of the time.

Authors are thankful to Dr. Ali Yasir (Metrics Research, Pakistan) in assistance of manuscript writing and paper publication.
Disclaimer: None.
Conflict of Interest: None.
Source of Funding: None.