Objective: To evaluate the change in the levels of anti-Mullerian hormone, adiponectin, weight loss and fertility parameters in obese women with or without polycystic ovary syndrome, following 12 weeks of supervised aerobic exercise.
Methods: This study was conducted from August 2013 to October 2014 among obese women with or without polycystic ovary syndrome referred to Obstetrics and Gynecology clinic, Mansoura University Hospital, Faculty of Medicine, Mansoura, Egypt. Patients were classified into three age-matched groups; group A had controls, group B had patients with polycystic ovary syndrome and group C had obese women. Anti-Mullerian hormone, adiponectin, follicle-stimulating hormone, oestrogen, fasting insulin, fasting glucose, homeostasis model of assessment of insulin resistance, antral follicle count, hirsutism score, weight, menstrual cyclicity and ovulatory function were assessed at baseline and following 12 weeks of supervised aerobic exercise. Statistical analysis was performed using SPSS 17.
Results: Of the 90 patients, there were 30(33.3%) in each group. The mean age was 28.7±3.84 years in group A, 27.9±4.1 years in group B and 27.6±5.7 in group C. The 30(33.3%) participants who responded to aerobic exercise interventions showed significant improvements in reproductive function), with lower baseline anti-Mullerian hormone levels, greater weight loss and higher adiponectin level compared to the the 30(33.3%) participants who did not respond to the exercise programme. Weight loss, fertility hormones, follicle-stimulating hormone, prolactin, oestrogen, antral follicle count, baseline anti-Mullerian hormone, and adiponectin were significantly correlated to the improvement in reproductive function (p<0.05 each). The change in anti-Mullerian hormone and adiponectin levels correlated significantly with physical activity level in both responders and non-responders (p<0.05). In women with anovulatory syndromes, there were significant improvements in ovarian process with an ovulation rate of 13(43.3%) and a restoration of menstrual cycle with a rate of 17(56.7 %) following 12 weeks of supervised aerobic exercise.
Conclusion: Moderate aerobic training for 12 weeks had a positive significant effect on reproductive functions via modulating adiposity, the levels of adiponectin, anti-Mullerian hormone and fertility hormones.
Keywords: Polycystic ovary syndrome, PCOS, Aerobic exercise, Anti-Mullerian hormone, AMH, Obesity. (JPMA 67: 499; 2017)

Many studies reported good reproductive functions among women with optimal body weight (BW) compared to those with obesity who are more likely to experience reproductive problems, including menstrual disorders, infertility, anovulation and maternal complications during pregnancy.1-6
Polycystic ovary syndrome (PCOS) is the most common cause of anovulatory infertility in women of reproductive age, affecting about 7% of this population. The aetiology of PCOS is closely linked to obesity and abdominal adiposity that are considered to worsen the clinical presentation, particularly menstrual irregularities and hyperandrogenism.6,7 Recently, it was reported that new roles of adipokines such as leptin, adiponectin and resistin emerged in the field of fertility and reproduction by regulating the functions of gonads and the hypothalamic-pituitary axis.8,9
In PCOS patients, the levels of adipokines are still controversial; a few reports have summarised the effects of adiponectin on the reproductive organs, either at a molecular level or for clinical relevance.10,11 lower level of adiponectin was reported in obese women with or without PCOS compared with healthy control subjects of a similar body mass index (BMI).12,13 Similarly, serum anti-Müllerian hormone (AMH) levels were reported to measure ovulation rates in overweight and obese women with PCOS women, whereas it released from the granulosa cells into both pre-antral and antral follicles.14 It was reported that women with significantly lower baseline AMH levels experienced menstrual improvements compared with those who have menstrual disorders with higher AMH levels. The decline in serum AMH levels was correlated with age, the number of antral follicles and the ovarian response to hyper stimulation.15,16
Weight loss via exercise or diet is considered one of the most important targets in lifestyle modification programmes capable to induce an improvement in reproductive function among obese women with PCOS.17 Exercise interventions of moderate activity are one of the most important lifestyle modifications that positively influence on fertility and assisted reproductive technology (ART) outcomes.18 It was shown that implantation rates, pregnancy and a reduction in the risks of miscarriage were reported among women undergoing intra-cytoplasmic sperm injection (ICSI) following exercise training for at least one hour three times per week.19 Also, low to moderate exercise was also associated with increased implantation and live birth rates in women undergoing ART.20 Studies of the effects of 12- to 24-week lifestyle interventions comprising diet, exercise and/or behavioural changes in overweight infertile women with or without PCOS,2,21 showed a significant improvement in ovulatory, menstrual regularity and reduced risk of miscarriage compared to pre-intervention.22
Little is known about the effects of supervised aerobic training (SAT) on the level of AMH and adiponectin which may have a role in improvements of reproductive function in obese women with or without PCOS. The current study was planned to evaluate the effect of supervised aerobic exercise (SAE) interventions for 12 weeks on adiposity measures, AMH and adiponectin levels, and to study the possible correlation with adiposity, clinical and hormonal parameters in PCOS and normo-ovulatory women.

This study was conducted from August 2013 to October 2014 among obese women with or without polycystic ovary syndrome aged between 20 and 35 years referred to Obstetrics and Gynecology clinic, Mansoura University Hospital, Faculty of Medicine, Mansoura, Egypt. Diagnosis of PCOS was established according to Ferriman-Gallwey scores.23 Based on the presence of elevated serum fertility hormones, disorder in biochemical hyper-androgenism, presence of chronic anovulation and Ferriman score of >8. Women with an ovulatory infertility were diagnosed according to irregular periods, normal fertility hormones and regular sexual intercourse.24
Based on obesity and PCOS diagnosis, participants were classified into three groups: group A were controls with BMI of 20-29 kg/m2, group B had PCOS and BMI of 30-35 kg/m2), and group C had obese women with BMI of 30-35 kg/m2). The control group consisted of healthy women with male, tubal or unexplained infertility. They had regular ovulatory cycles (25-35 days), no endocrine abnormalities, and had normal ultrasonic ovarian morphology. Patients with presence of ovaries, no previous ovarian operation, adequate visualisation of ovaries on transvaginal sonography and no current hormone therapy were included.
Participants with normal BMI, other concomitant diseases such as diabetes, viral infections, current and previous drug administration that affected hormonal levels were excluded.
This study was approved by the ethics committee of the Rehabilitation Research Chair (RRC), King Saud University, Saudi Arabia. Informed consent was obtained from all participants.
Participants were subjected to training interventions programme of treadmill walking, 45 minutes three times per week for 12 weeks. Each individual\\\'s training intensity was calculated as the training heart rate (THR) based on the subject\\\'s age and predicted maximum heart rate and resting heart rate according to Karvonen\\\'s formula, [THR = resting heart rate (HRrest) + (maximum heart rate (HRmax) - HRrest) × training fraction (TF)], where TF was 65% to 75% for the moderate intensity used in this study. Each exercise session consisted of three phases, i.e. warm-up, active and cool-down phases. The cool-down phase continued for 10 to 15 minutes during which the workload gradually decreased until HR and blood pressure (BP) nearly returned to their resting levels. Throughout the training session, the subjects were monitored by a portable heart rate monitor to keep the exercise intensity within the pre-calculated training heart rate for each subject.25,26
Total energy expenditure scores of each patient were calculated from total daily activities collected using pre-validated questionnaire.27 For each participant, energy scores were calculated based on duration, intensity and frequency of physical activity (PA) performed in a typical week.
According to the response of reproductive functions to exercise interventions, the participants were classified into two groups: responders and non-responders. Responders were characterised by improvements in ovulatory function, menstrual status such as change from irregular cycles to regular cycles or an improvement in consecutive intercycle variation comparing with non-responders and baseline data.
Comprehensive physical examinations, Ferriman-Gallwey scores,27 and anthropometric measurements such as BMI, waist circumference (WC) and waist-to-hip ratio (WHR) were estimated in all participants. Serial transvaginal ultrasonographic scans were performed to monitor ovulation at baseline, every 4 days, and successively daily until ovulation in case of a dominant follicle with a mean diameter of >12mm. Retrospectively, ovulation was identified by a decrease in follicular dimensions and liquid in the cul-de-sac, and was confirmed by plasma phosphorus (P) and serum oestradiol concentrations assessed before the expected menses on the basis of ultrasonographic results.
Overnight fasting blood samples were taken in the early follicular phase (day 2-3 after the last menstrual period) from all patients and controls for hormone measurement. Serum samples were extracted and stored at -20°C. Assays of serum follicle-stimulating hormone (FSH), oestrogen (E2), prolactin (PRL), adiponectin and AMH, and a transvaginal ultrasound examination for assessment of antral follicle count (AFC) were performed at baseline, 3 weeks and 12 weeks of following moderate aerobic training programme.
Serum FSH and E2 were performed by using mini VIDAS technique and corresponding kits (bio-Mérieux® France). The results were measured and calculated according to the instructions of kits. Serum levels of AMH, PRL, and total adiponectin were determined by enzyme-linked immunosorbent assays (ELISA), (using Beckman coulter Inc., United States; EIA kit, No; 500730, Cayman chemical co., United States; and ADIPOA; ALPCO Diagnostics, Salem, United States kits, respectively).
Homeostasis model of assessment of insulin resistance (HOMA-IR), fasting glucose-to-insulin ratio (GIR) (mg/1024 U), and free androgen index (FAI) were calculated according to standard laboratory assays in all participants before and after each exercise training periods.
A personal daily diary comments such as any adverse effects, together with their severity, duration and any possible cause-effect relationship with the interventions, and the quantity of menstrual bleeding, which was evaluated subjectively by using a rank analogue scale that ranged from 0 (absence of menses) to 5 (normal uterine bleeding) and 10 (severe uterine bleeding) were collected for each participants.
AFC for all participants were counted and calculated during the early follicular phase (cycle day 2 or 3) by using transvaginal ultrasound scanner assay (Philips 11*E; with a 5 MHz probe). In each ovary, the total number of small follicles (2-8 mm) was counted, whereas the sum of the follicle counts in each ovary gave the total follicle count.
Statistical analysis was performed using SPSS 17. The data was evaluated and tabulated as mean and standard deviation (SD). Repeated measure analysis of variance (ANOVA) and Pearson\\\'s correlation coefficient were used to evaluate and compare significance of the relationships between the studied parameters. P<0.05 was considered significant. 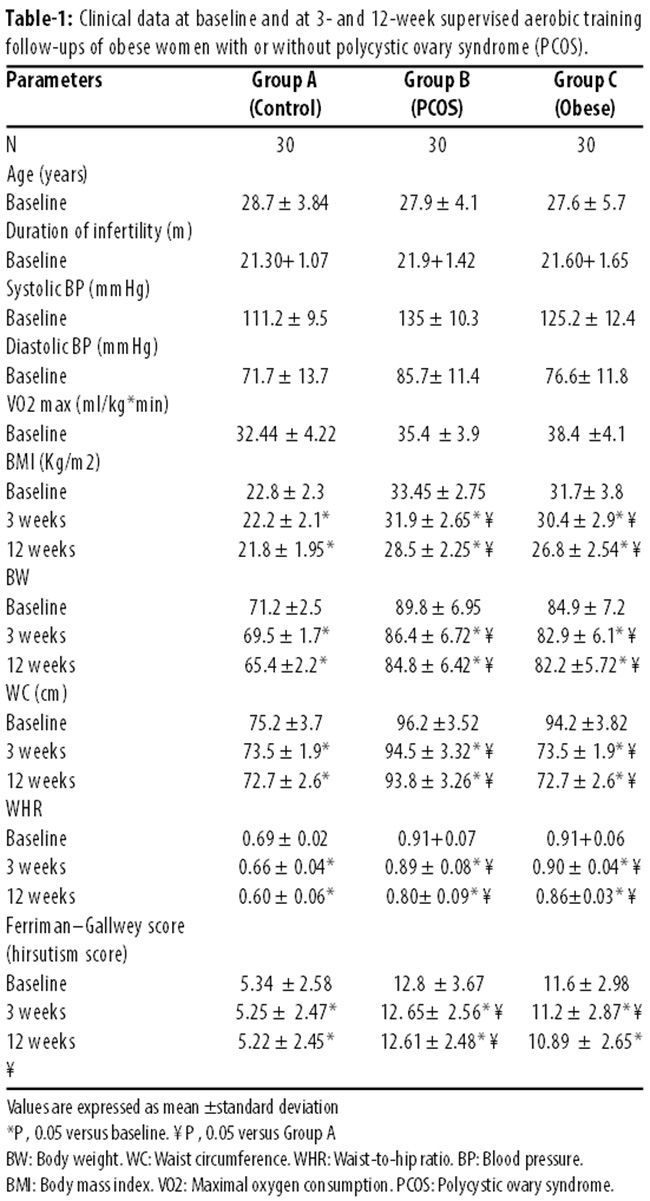 There was significant correlation between the change in BMI, blood glucose, FI, HOMA-IR, FSH, PRL and E2 and the improvement in AFC, ovarian volume, and hirsutism score towards AMH and adiponectin serum levels of responder group compared to non-responders (Table-3). 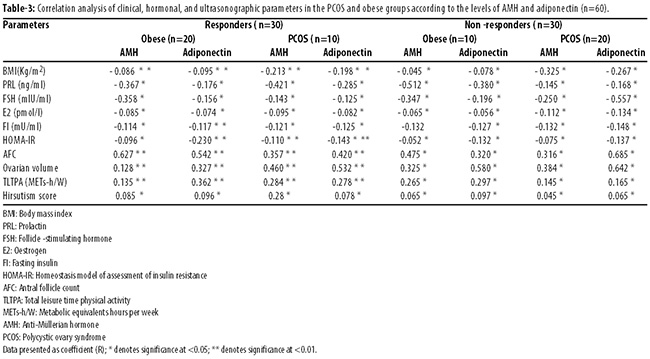 There were 30(33.3%) participants in the responders group, including 20(66.7%) obese and 10(33.3%) PCOS patients. Similarly, there were 30(33.3%) non-responders, including 20(66.7%) PCOS and 10(33.3%) obese patients.
In the responders group, women showed significant improvements in reproductive functions such as increase in ovulation rates and improve in menstrual cyclicity. Also, 8(26.7%) women had enhancement in ovulatory and menstrual cyclicity (4(50%) amenorrhoeic women regained a cycle, 3(37.5%) improved cycle length variation and 1(12.5%) improved cycle length); 17(56.7%) women showed an improvement in menstrual cyclicity (9(52.9%) with regular cycles, 5(29.4%) with improving in cycle length, and 3(17.6%) with improving in cycle length variation); and 5(16.7%) women showed an improvement in ovulation.
The change in anthropometric, hormonal, and clinical data was significantly correlated in patients who responded to the improvement in reproductive function. In the responders group, there was a significant reduction in BMI, AMH, PRL, FI, HOMA-IR, whereas FSH, E2, adiponectin level and AFC count were significantly higher compared to the non-responders group. The obtained data was confirmed with higher significant rate (p< 0.01) of leisure-time physical activity (LTPA) in responders compared to non-responders (Figures-1 and 2). 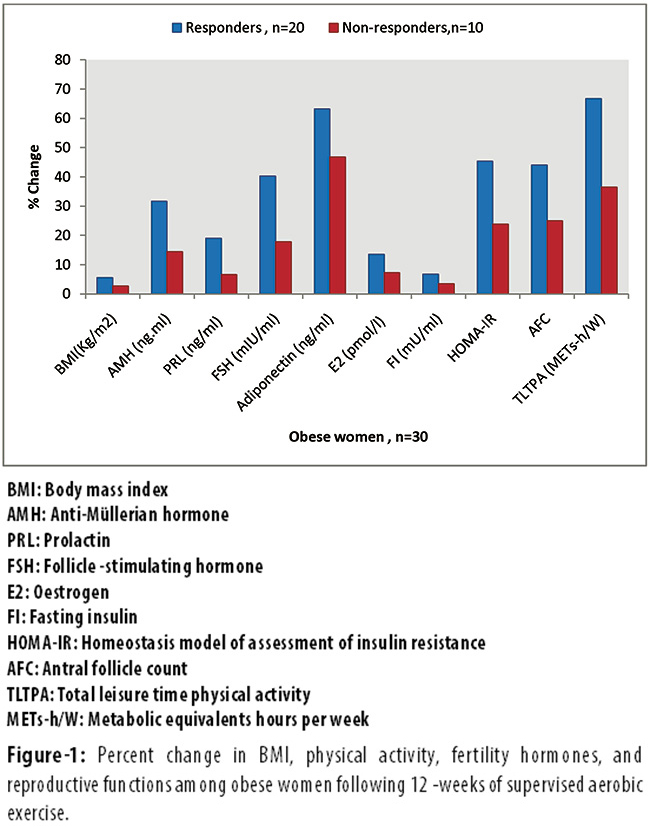 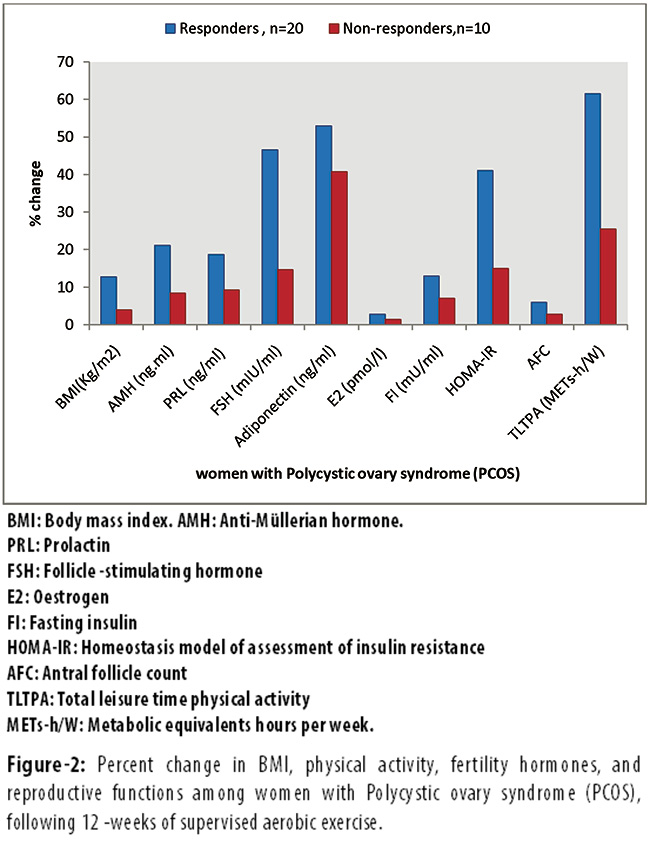 Moderate aerobic training for 12 weeks had a positive significant effect in improving reproductive functions via modulating adiposity, the levels of adiponectin, AMH and fertility hormones of obese infertile women with PCOS. Also, adiponectin and AMH could be useful as markers for the prediction of ovarian response to non-drug exercise interventions.