Objective: To assess awareness and attitude of medical students about organ donation.
Methods: This cross-sectional study was conducted in 2014 at King Abdulaziz University, Jeddah, Saudi Arabia, and comprised medical students. The participants were asked about their religious and other beliefs towards organ donation, their reasons for not donating organs, and their personal opinions about organ donation through a questionnaire. SPSS 21 was used for data analysis.
Results: Of the 481 participants, 250(52%) were females, and 231(48%) were males. The overall mean age was 21.36±1.63 years. Besides, 437(90.9%) students knew what organ donation means, 433(90%) supported organ donation, and 90(18.7%) knew someone who had donated an organ. Moreover, 245(50.9%) participants were willing to donate their organ to their family alone, 198(41.2%) were willing to donate to any deserving patient while 439(91.3%) rejected that religion precluded organ donation, and 354(73.6%) did not know about the grafting of organs from a man to a woman and vice versa.
Conclusion: Awareness and attitude towards organ donation were not up to the mark among the participants.
Keywords: Organ donation, Awareness, Attitude, Saudi Arabia. (JPMA 67: 534; 2017)

End-stage organ failure can be treated by organ transplant. Therefore, the need for the donation of organs has increased.1 For multiple reasons, there is an increasing demand for transplants, but there is a shortage of organs due to fewer donations.2 Although there have been a lot of improvements in the system of organ donation (OD) in the United States, more than 90,000 patients were still on waiting list for kidney transplant, while the overall figure was 116,705 patients for all organs including liver, heart, lung, pancreas, etc. as of July 2010.3 In Saudi Arabia, there has been some development in the system of OD, but discrepancy exists in different areas of the country; for instance, more than 70% of organ donations come from the central region.4 Literature shows that many precious lives have been lost due to non-availability of donated organs.5
The rate of organ donation is high in those countries where \\\'opt-out\\\' option (a person has to inform formally that he/she does not want to donate his/her organ) is in practice as compared to the countries where \\\'opt-in\\\' option (a person has to inform formally that he/she wants to donate organs) exists. This law is favoured by the majority of sample population in a study conducted in Austria.6 There is a need to change legislation policies to make organs more available.
There is an opinion encouraging financial incentives to increase the number of donors, but in a German study, majority of the participants were not in favour of direct financial incentives.7 Lack of organs for donation is a worldwide issue which needs attention by governments and healthcare professionals.8
The role of health professionals is important because they are the first link between the patients and the donors, or the donor\\\'s family.9 There is evidence suggesting that healthcare professionals\\\' attitude can play an imperative role in rates of organ donations, promotion of organ donation campaigns, and its successes.10
It has been studied extensively that the knowledge and attitude of medical students towards organ donation play a vital role. Yet, it is found that there are certain misconceptions and lack of knowledge in healthcare professionals, especially medical students, that must be addressed properly.11 In this context, it becomes imperative that our medical students must have sufficient knowledge and very positive attitude towards organ donation, particularly due to certain ethical issues in society.
The current study was planned to assess the awareness and the attitude of a sample of medical students in Saudi Arabia towards OD. This study would help to develop a policy to enhance organ donation trend in the young generation.

This cross-sectional study was conducted in 2014 at the Faculty of Medicine, Jeddah and Rabigh campuses of King Abdulaziz University (KAU), Jeddah, Saudi Arabia, and comprised medical students who were between the second and sixth year of their education. The students\\\' opinion was sampled by a questionnaire.
The questionnaire contained information about their age, gender and the year of study, with several items assessing their awareness and attitudes towards OD. The questionnaire also contained items about their religious and other beliefs towards donation, their reasons for not donating organs, and their personal opinions about donation.
The sample size was calculated by SurveyMonkey sample size calculator12 by taking population size of 2,000 medical students (there were 1,500 male and female medical students in Jeddah campus and 200 male students in Rabigh campus), the confidence level of 95% and margin of error at 5%. The calculated sample size was 323, but we included all those students who returned the completely filled questionnaire. The participants were selected from each class by convenience sampling method, and ethical approval for the study was obtained from the Research Ethics Committee of KAU\\\'s Faculty of Medicine, Rabigh.
Descriptive analysis was done to determine frequencies and percentages. SPSS 21 was used for data analysis. 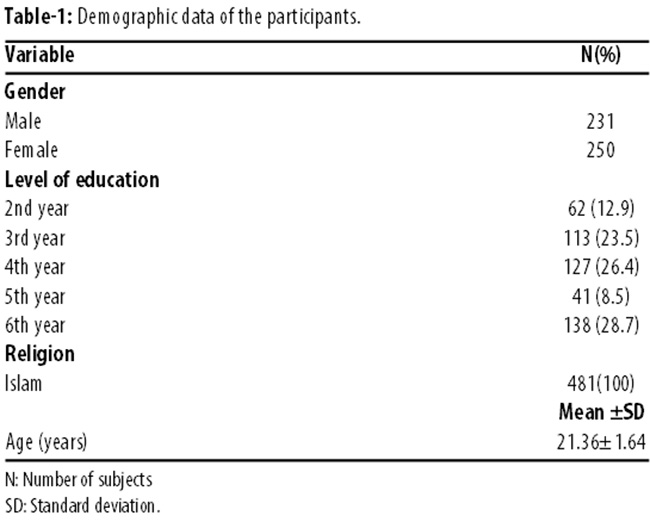 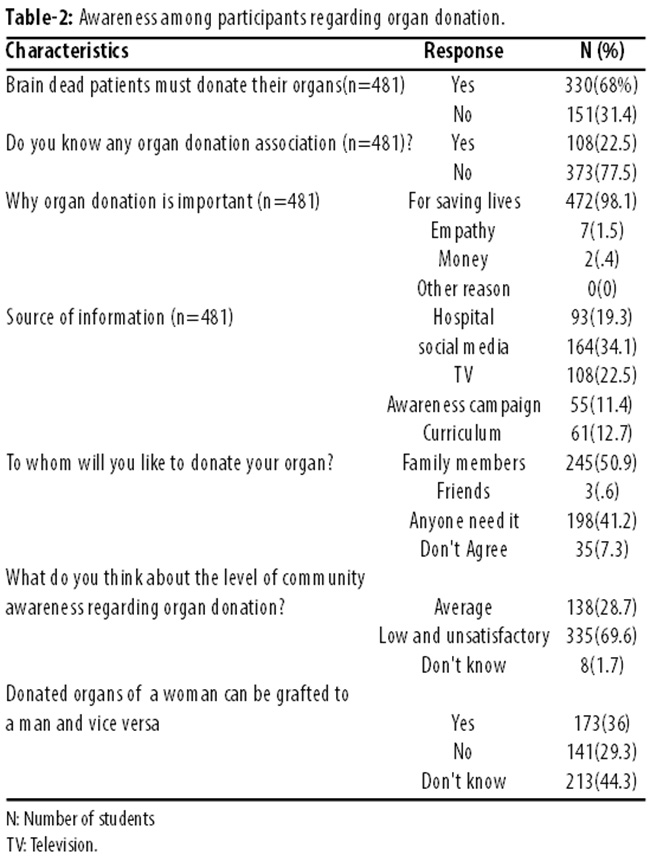 Apart from that, 433(90%) supported OD, whereas only 24(5%) had OD cards. Moreover, 439(91.3%) participants did not think that religion precluded organ donation while 271(56.3%) were of the opinion that having a cardiovascular condition or diabetes mellitus was a contraindication to become an organ donor (Table-3). 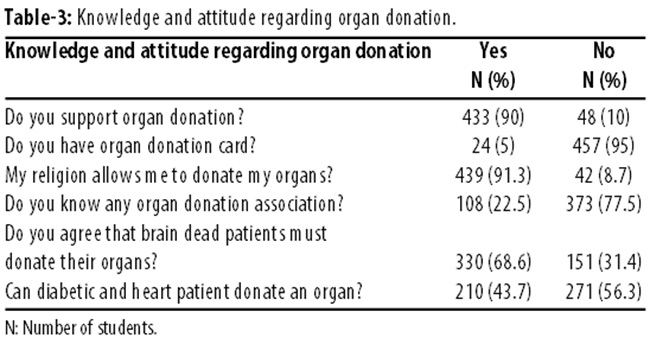 Furthermore, 153(31.8%) participants agreed to donate organ(s) while 328(68.2%) had several reasons for not donating organ(s), like several participants had never thought about OD, 72(15%) said their family would not allow them, 43(9%) wanted to keep all their organs intact while 10(2%) each pronounced religion and medical history for not donating organs (results not shown in tables).

Despite the positive attitude of medical students towards OD in the current study, there existed a few misconceptions and lack of knowledge about organ donation; for instance, 66% of the students had never thought about it. These findings were similar to a study conducted at the University of California, where it was found that medical students had lack of knowledge about OD in spite of addition of donor procurement elective in the curriculum on the initiative of the students.13
In practical life, the actual number of organ donors is considerably lower than the number of patients needing an organ transplant. This discrepancy creates a challenge for the health professionals and organ procurement agencies concerned for patients care to need organ transplants.2,8
It is also suggested that there is a need for new strategies for increasing the number of organ donors so that more patients can receive transplants. Our results emphasise the concern that medical students are noncommittal about becoming donors or have doubts about the process of becoming a donor. In our study, the knowledge of our students was not up to the mark; for example, the majority did not even know about organ grafting from a male to a female or vice versa. A recent study observed that although the knowledge of medical students about organ donation was not up to the mark, it was improved by introducing new teaching strategies.14
Another interesting finding in our survey was the role of media in enhancing awareness among students, as the majority of them had knowledge about OD from media. The literature supports this finding. A study in the United States observed that there was a 21.2-fold increase in public registration for OD after a social media campaign on Facebook.15 However, a medical student must have a better knowledge about organ donation, but there are certain deficiencies in the curriculum as only 12.7% of the students got knowledge about organ donation from the curriculum. This concept was highlighted in a study which emphasised that medical students\\\' knowledge and attitudes could be improved by developing a curriculum with stress on the information pertaining to organ donation.16
In a study conducted in France, even first-year medical students were fully aware of OD, transplantation and the problems associated with those issues. In that study, 91.7% students were willing to donate their kidneys to their relatives, while 81.1% agreed to donate their organs after death.5
The two-thirds of our participants (68.6%) were in favour of brain-dead patients donating their organs, but only 31% were ready to donate their own organs.
Attitude towards organ donation is less favourable in Asian countries, mostly due to cultural norms. This opinion is highlighted in a study in which students\\\' attitude in Japan and China was not very much positive, although it was more positive in Japanese (43.6%) than Chinese students (35.9%).17 In a study carried out in Turkey, the attitude of medical students was less positive with only 17% students willing to donate their organ(s) without any hesitation, while 41% were ready but with some queries, and 40% were willing, with only 12.5% without any reluctance to donate organ(s) to their relatives. The possession of organ donation card was even worse as only 1.2% of students had donation cards.18 The situation was far better in a study conducted in Puerto Rico in which about 72% participants had a positive perception about organ donation, and 23% had OD card.19 In an Iranian study, 78% of health care professionals had a positive attitude towards OD, and 25% were carrying the OD card.20
In the Netherlands, the attitude of students was quite positive towards organ donation; 80% were ready to donate, and 59% were registered for organ donation.21 Interestingly, it was observed in a study conducted in the United Kingdom that even the knowledge of junior doctors about OD was limited, although they had more positive perception of it.22
The students in our study had a few misconceptions regarding OD, which might be corrected by making the processes of signing organ donation cards convenient, publicising how to sign up for the donor registry and providing education to rectify the misconceptions related to organ donation. If medical students and other healthcare professionals are convinced about ODs and they register for it, they can be the role models for the public and help make organ donation campaigns more successful.
Literature shows that the situation of OD is better in countries where legislations are good, and healthcare professionals and the public as have better education and understanding of it. But still, the matter needs further exploration and discussion to improve the situation in the future.

Awareness and attitude towards OD were not up to the mark among medical students. There is a need for awareness campaigns for medical students as well as for the public.
Disclaimer: None.
Conflict of Interest: None.
Source of Funding: None.