The effect of bariatric anaesthesia on postoperative pulmonary functions

Objective: To evaluate respiratory function in the post-operative early period of patients undergoing bariatric surgery using the sleeve gastrectomy technique.
Methods: This prospective, observational study was conducted at Bülent Ecevit University Health Application and Research Centre, Zonguldak, Turkey from June to December 2014, and comprised patients with planned bariatric sleeve gastrectomy under general anaesthesia. Participants were visited 12-24 hours before the operation to record accompanying diseases and demographic data. Before the operations, respiratory function test, maximum expiratory pressure, maximum inspiratory pressure and arterial blood gas assessment tests were done and recorded as T0. After one hour of the operation, Aldrete scores >9 and the above-mentioned tests were repeated and recorded as T1. SPSS 18 and MedCalc 12.2.1.0 were used for statistical analysis.
Results: Of the 76 participants, 60(78%) were women and 16(21%) were men. The overall median age was 39 years (inter-quartile range: 32-47 years). The mean and median values for forced expiratory volume in 1 second, forced vital capacity, maximum inspiratory pressure, maximum expiratory pressure and the ratio between partial pressure of oxygen in arterial blood and fraction of inspired oxygen at T0 were 101±17, 102±17, 66 (interquartile range: 59-74), 114 (interquartile range: 100-138) and 379±49, respectively, compared with 78±18, 76±18, 53 (interquartile range: 48-59), 85 (interquartile range: 73-95) and 331±49at T1 (p<0.001 each). Also, 38(50%) participants were given sugammadex and 38(50%) were given neostigmine. At the end of the test, sugammadex (odds ratio: 5.80; 95% confidence interval: 1.26-26.69; p=0.024) and pre-operative ratio between partial pressure of oxygen in arterial blood and fraction of inspired oxygen (odds ratio: 1.04, 95% confidence interval: 1.02-1.06; p<0.0001) were found to correlate significantly.
Conclusion: Impairment of respiratory function was found during the early post-operative period.
Keywords: Bariatric surgery, Anaesthesia, Pulmonary functions, RFT, Sugammadex. (JPMA 67: 561; 2017)

Obesity is one of the most significant health problems in the modern world. According to 2014 data from the World Health Organisation (WHO), there are 1.9 billion overweight and 600 million obese people over the age of 18 years worldwide.1
Obesity affects many systems and, as a result, is known to cause diseases such as diabetes mellitus (DM), chronic kidney disease (CKD), cardiovascular disease, obesity hypoventilation syndrome (OHS), asthma and sleep apnoea-hypopnoea syndrome to occur more often.2-4 Obesity affects respiratory functions through mechanical pathways. Excess fat around the neck, upper airways, chest wall and abdomen forms a mechanical barrier around the lungs, reducing the normal compliance of the diaphragm and chest cage. Additionally, collapse of alveoli linked to closure of the small airways, particularly in the basal sections of the lungs, and increased pulmonary blood volume leading to imbalanced ventilation perfusion, cause hypoxia.5
For treatment of obesity, methods involving diet, exercise, and behavioural changes, as well as pharmacotherapy, are primarily recommended. However, despite these methods being used for most patients, they are typically unsuccessful. Therefore, surgical techniques are important. Studies have shown that surgical techniques produce successful results for obesity treatment.6 Under bariatric anaesthesia, patients undergoing laparoscopic abdominal surgery may have disrupted respiratory functions in the early postoperative period.7 This disruption occurs as a result of reduced diaphragm compliance, linked to increased intra-abdominal pressure due to the gases used to expand the laparoscopic field of view, and the fact that muscle agents used in anaesthesia negatively affect respiratory muscles in the post-operative period.8,9 In recent years, sugammadex has been used in anaesthesia practice to antagonise the effects of muscle-relaxing agents like rocuronium and vecuronium.10 Compared with neostigmine, sugammadex is associated with early wakening and a more rapid recovery by patients.11
The current study was planned to evaluate respiratory function in the post-operative early period of patients undergoing bariatric surgery using the sleeve gastrectomy technique, and to determine the factors that could negatively affect respiratory functions.

This prospective, observational study was conducted at Bülent Ecevit University Health Application and Research Centre, Zonguldak, Turkey from June to December 2014, and comprised patients with planned bariatric sleeve gastrectomy under general anaesthesia. Ethical approval was obtained from the institutional ethics committee. Written informed consent was obtained from all participants. All procedures involving human participants were in accordance with 1964 Helsinki declaration and its later amendments. Patients having a body mass index (BMI) >40 kg/m2 and aged between 18 and 60 years were included. Patients who had a previous history of obesity surgery or chronic respiratory disease, renal and/or hepatic dysfunction, malignant hyperthermia, were pregnant, or had an allergy or contraindication to narcotics, neuromuscular blockade agents, sugammadex, neostigmine, or other medications used during general anaesthesia were excluded.
To measure the respiratory function of the patients in the study, the respiratory function test (RFT) and arterial blood gas (ABG) analysis were conducted, and maximum expiratory pressure (MEP) and maximum inspiratory pressure (MIP) were assessed. For all patients, RFT measurements and evaluations were completed by a pulmonologist, while MIP and MEP measurements were completed by a physical therapy and rehabilitation expert. Patients were visited 12-24 hours before the operation to record accompanying diseases and demographic data. Before the operations, RFT, MEP, MIP and ABG assessment tests were completed and recorded as T0. One hour after the operation, Aldrete scores > 9, RFT, MEP, MIP and ABG assessment tests were repeated and recorded as T1. RFT measurements were obtained using a SpirolabIII® (MIR, Rome, Italy) device. Spirometry was completed in accordance with the guidelines of the American Thoracic Society (ATS).12 All of the tests followed a standardised procedure, with the patients sitting upright, and involved use of a nose clip with a minimum forced exhalation time of 6 seconds after maximum inhalation. The best values of each forced expiratory volume in 1 second (FEV1) and the forced vital capacity (FVC) from at least three acceptable forced expiration manoeuvres were used for analysis. The FEV1 and FVC values were expressed in litres. Respiratory muscle strength was measured by the maximal respiratory pressures, MIP and MEP,13 using an analogue manovacuometer Micro RPM® (CareFusion, San Diego, California, United States). The MIP and MEP values were expressed in centimetre of water (cmH2O).
No patient was given premedication. During the operation, mean arterial pressure, heart rate, peripheral oxygen saturation, bispectral index (BIS) values and adductor muscle and nasopharyngeal temperatures were monitored and recorded. For neuromuscular conduction monitoring, a train-of-four (TOF)-Watch® SX device (Organon Teknika BV, Boxtel, Netherlands) was used. The temperature of the operating room was adjusted to 21-25°C. Patients were covered and care was taken that the skin temperature of the thenar region did not fall below 32°C.
All of the patients were administered the routine bariatric anaesthesia protocol of our clinic. While muscle relaxant agents were administered according to ideal body weight (IBW), all of the other anaesthetic agents were administered according to corrected body weight (CBW). IBW was calculated according to the formula14 — 22 × height (m)2 — while CBW was calculated using the formula IBW+40% × IBW. All of the patients had anaesthesia induction with 1 mcg/kg (CBW) intravenous (IV) fentanyl and 2 mg/kg (CBW) propofol. When BIS values were 40-60, TOF-Watch device calibration was completed, and three consecutive single twitch control values were recorded. Rocuronium [IV; 0.6 mg/kg (IBW)] was administered, and the TOF value was allowed to reach 0 (TOF0). After TOF0, the patients were intubated. Anaesthesia maintenance for all patients was 50:50% oxygen and nitrous oxide (O2/N2O), and 2% sevoflurane was titrated to ensure the BIS values were between 40 and 60. During the operation, when the TOF value was 25% (TOF25), one-fourth of the induction dose of rocuronium was repeated. At the end of the operation, patients were left until TOF25 was reached. When TOF25 was reached, sugammadex [IV; 2 mg/kg (current body weight (CBW)] or neostigmine (IV; 0.03 mg/kg) and atropine [0.01 mg/kg; CBW) were administered. When the TOF values of all of the patients were 90% (TOF90), they were extubated. The time between TOF25 and TOF90 was recorded in seconds (TOF25-90). The time from the beginning of surgical incision to the last skin suture was termed the surgical duration and was recorded. After the skin sutures were completed, anaesthetic gases were terminated in both groups. The time from anaesthesia induction to cessation of gas was termed the anaesthesia duration and was recorded. The time from the cessation of anaesthetic gases until a modified Aldrete score (MAS) > 9 was reached was recorded as the recovery time. After the operation, the patients were transferred to the post-anaesthesia care unit (PACU). All of the patients were administered 1 mg/kg tramadol IV for post-operative pain control at the end of skin incision. For 24 hours, post-operative tramadol was administered by patient-controlled analgesia. Visual analogue scale (VAS) scores of pain were recorded; when VAS >4, a non-steroidal anti-inflammatory analgesic agent was added and recorded.
The FVC, FEV, MIP, MEP and ABG parameters were compared during the early post-operative period with the basal values before the operation.
Descriptive statistics of the categorical variables were given as numbers or percentages; continuous variables were provided as means ± standard deviation (SD) or as medians (minimum-maximum). Chi-square test was used to evaluate categorical variables. The paired t-test or Wilcoxon signed-rank test was used to compare the means/medians of variables as appropriate. Predictors of post-operative normoxemia among the post-operative patients were identified using univariate and multivariate logistic regression analyses. SPSS 18 and MedCalc 12.2.1.0 were used for statistical analysis. P-values were two-sided; p<0.05 was considered statistically significant. 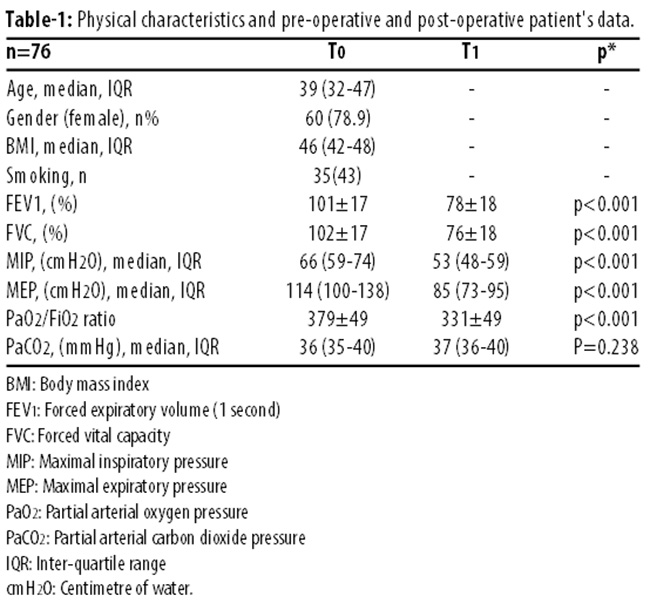 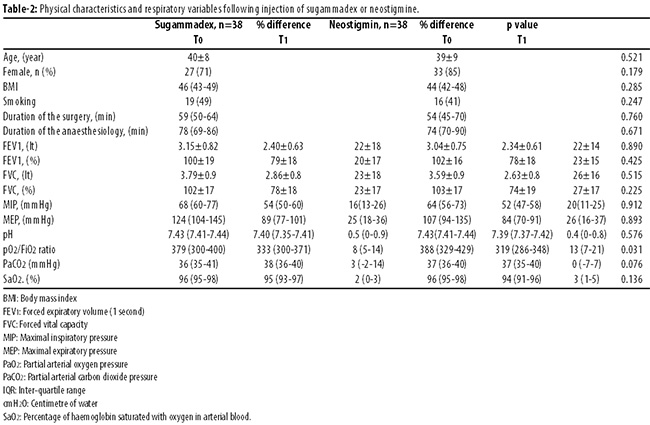 Impairment of respiratory function was found during the early post-operative period in patients undergoing laparoscopic bariatric surgery. In these patients, early awakening and recovery from anaesthesia may be beneficial for respiratory function. Sugammadex is a very new agent. More randomised, controlled studies using different doses of sugammadex, and including larger samples, are required in the future to illustrate the effects of this agent on post-operative respiratory function.
Disclaimer: None.
Conflict of Interest: None.
Source of Funding: None.