Road traffic crash related injured and fatal victims in Karachi from 2007 to 2014: A time-series analysis

Injuries and deaths due to road traffic crashes (RTC) are major public health concern. The Road Traffic Injury Research and Prevention Center, collects RTC data on injuries and fatalities from five emergency departments in Karachi. Data generating process (DGP) for RTC from 2007 to 2014, for monthly number of fatal and injured victims were analyzed using autoregressive integrated moving average and vector auto regression, time series models. Results provide strong evidence that the DGP for the current levels of the number of fatalities and injured owing to RTCs are significantly influenced by the own past history of the two series. The analysis with the impulse-response function also indicated that there is a slight seasonality pattern in the number of injured and fatalities. The similar behaviour and association of the two variables suggest that certain conditions e.g. road conditions, weather, volume of vehicles, and accidents might be persistent in time in Karachi.
Keywords: Road Traffic Fatalities, Injuries, Karachi, Pakistan.

Deaths and injuries due to road traffic crashes (RTCs) are a serious global public health concern. In 2013, RTCs killed 1.25 million people globally, with ninety percent of RTC mortality brunt was borne by low and middle countries like Pakistan.1 Globally, RTC fatality rate has been reported as 17.4 per 100,000 population1. Pakistan is categorized as part of the Eastern Mediterranean region, in which RTC fatality rate was reported as 19.9 per 100,000 population, which is second highest, after the African region\\\'s rate of 26.6, and compares unfavourably with the rate of 17.4, globally.1 Among all age groups, RTCs are the ninth leading cause of death, while among the 15-29 age group it is the leading cause of death globally.1
The World Health Organization (WHO) reported 7,636 RTC fatalities in the year 2013 for Pakistan. However, for Pakistan, WHO\\\'s estimated road traffic fatalities for the same year were 25,781, with a 95% confidence interval of 20,979 to 30,582. And estimated rate per 100,000 population to be 14.2, for the year 2013. Numerous studies have been published using Karachi\\\'s Road Traffic Injury Research and Prevention Center\\\' (RTIRPC) data from the years 2007 to 2014, describing the correlates, and morbidity and mortality burden of RTCs.2-9 However, time series analysis has not been conducted using RTIRPC\\\'s unique dataset. Which entails deciphering trend, seasonal variation and structure of data in terms of autocorrelation.
In this study we provide results from the time series analysis of RTIRPC\\\'s data on the monthly numbers of fatalities and injured individuals for the eight-year period from 2007 to 2014.

Established in September 2006, Road Traffic Injury Research and Prevention Center (RTIRPC) has been collecting road traffic crash (RTC) injuries and fatalities data in Karachi. RTIRPC is a public-private partnership in Karachi, financed by community and corporate donors to study road traffic crashes in the most populous city of the country. This RTC surveillance project is a collaboration between Jinnah Post Graduate Medical Centre (JPMC), Aga Khan University Hospital, and NED University of Engineering & Technology, and was notified by the Ministry of Health, Government of Pakistan.
RTIRCP collects RTC data from the emergency departments of five major public and private hospitals in Karachi: Jinnah Postgraduate Medical Center, Civil Hospital Karachi, Liaquat National Hospital, Abbasi Shaheed Hospital and the Aga Khan University Hospital. Data pertaining to all injured and fatal victims of RTCs brought/admitted to these hospitals are recorded either directly from the victims and/or accompanying persons and then collated at the RTIRPC project office located at Jinnah Postgraduate Medical Center. Additional information is also obtained — where needed — from ambulance drivers, police and eye-witnesses to ensure accurate recording of all pertinent information. Data collectors are available at these five sites on 24/7 basis and work in three shifts to ensure that information pertaining to all RTCs victims gets properly collected and recorded. We analyzed the data generating process for RTC data in terms of monthly number of individuals who were injured or had died from January 2007 to December 2014, using STATA 14. The two monthly series of 95 numbers of both, fatal and non-fatal victims were analyzed for time trends using Autoregressive integrated moving average model (ARIMA), and Vector auto regression (VAR), time series analysis models.
The RTC data in terms of yearly number of fatalities and injured individuals from January 2007 to December 2014, are shown in Figure-1. 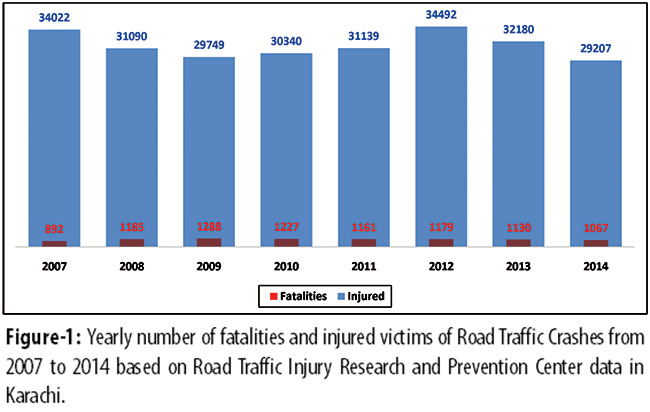 For years 2007, 2008, and 2009 there were 693, 222, and 14 records respectively, for which codes for disposal status from emergency departments were not assigned; hence, were not included in the analysis. The 95 monthly numbers of both fatal and non-fatal i.e. injured victims were used for time series analysis, as two series of time. Based on the results from the Dickey-Fuller test, we could not accept the null hypothesis of the presence of unit roots for any of the two variables.

Table 1 shows the results from these tests along with the p-values for both time series of the number of fatal and nonfatal/injured. Therefore, we concluded that both series were stationary. 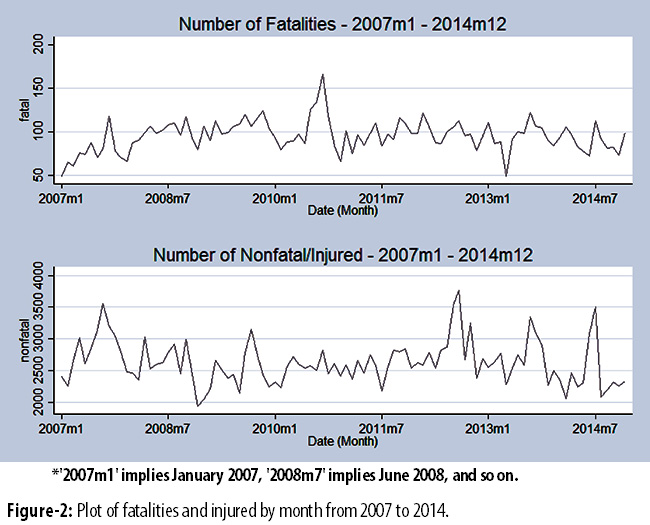 Figure-2 shows the plot for the two variables as a visual support for our conclusion on stationarity. No lags were added to the Dickey-Fuller tests because the error terms for the auxiliary regressions for the test did not have serial correlation.
Autoregressive integrated moving average (ARIMA) models: We first modeled fatalities time series, and the correlogram for the series is presented as Figure 3-A.

The correlogram indicates that we could fit an ARMA (1,1) model. However, that model did not fit well because there seemed to be a common factor (for AR1 and MA1) in the model. We decided to fit a series of ARIMA models considering the first and second lags. We also included the same models with nonfatal/injured as an explanatory variable to detect whether there could be association on the occurrence of the two kinds of RTA victims. All the models were fitted for the full sample to compute the Akaike (AIC) and Shwarz (BIC) information criteria. As an additional tool for deciding about the best model specification, we also fitted the models for a subsample (2007m1, 2013m12) to compute the minimum square errors (MSE) for the in and out of sample forecasts. The lower the information criteria and the MSE the better the model. Based on the AIC and BIC the three best models include nonfatal as an explanatory variable and correspond to the AR1, MA2, and ARMA (2,1) structures. By looking at the MSE we observed that the \\\'latest\\\' performs better in terms of in and out of sample forecasts, so we decided to select that model because it also had more structure. The results above have two main implications: The ARMA (2,1) structure indicates that the DGP for the number of fatalities tend to be strongly related to the level of the series in previous periods. The main impact occurs for the first two periods and then decays close to zero. This can be seen in the graph for the impulse-response function in Figure 3-B. The second implication is that the positive significance of \\\'nonfatal\\\' implies that there seems to be a contemporaneous association between the number of fatalities and injured. To better address this association, a Vector autoregression (VAR) model would be appropriate. We next modeled number of non-fatalities/injuries time series, and the correlogram for the series is presented as Figure 4-A.

The correlogram, which also indicates an ARMA (1,1) structure, but similar to the case for fatalities, the coefficient estimates for the AR1 and MA1 terms are not both individually significantly different than zero; only AR1 is. After an inspection of the potential ARIMA and ARIMAX (when an ARIMA model includes explanatory variables) models for nonfatal we were down to three specifications that we decided to evaluate using the information criteria and the MSE. The information criteria and the MSE favour the AR1 model with fatal as an explanatory variable. The model\\\'s impulse-response function is presented as Figure-4-B. The results indicate that the association with the previous period number of nonfatal/injured is smaller compared to the model for \\\'fatal\\\', and the effect of a shock in the current period decays quicker in this case.
Vector autoregression (VAR) model: the observed association between the two series was next analyzed using the VAR model. We selected the VAR model with lags 1 and 12. This model was selected after a comparison with a couple of other models i.e. VAR (1) and VAR (2). 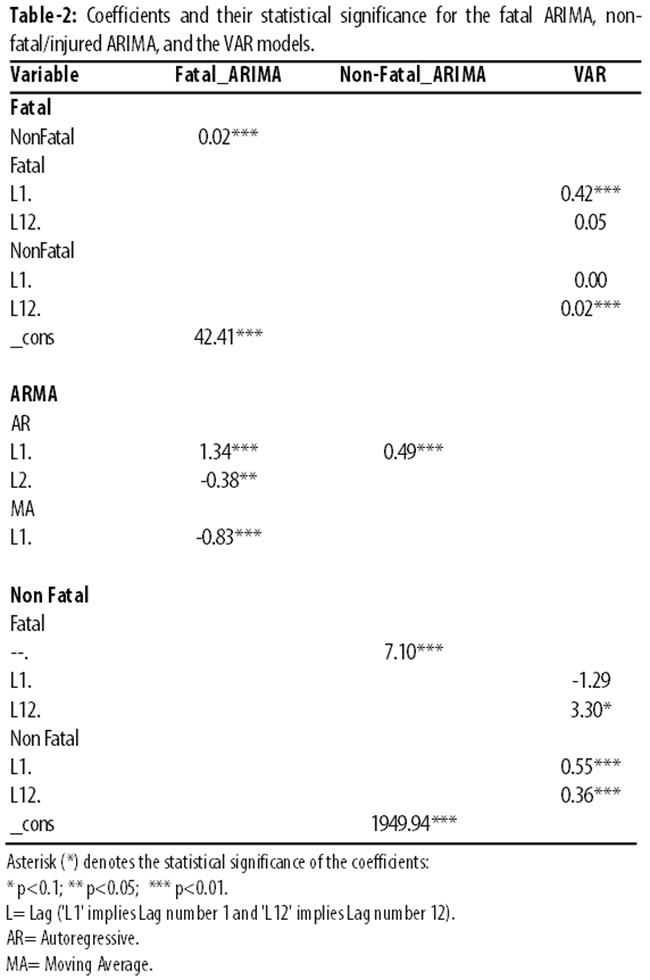 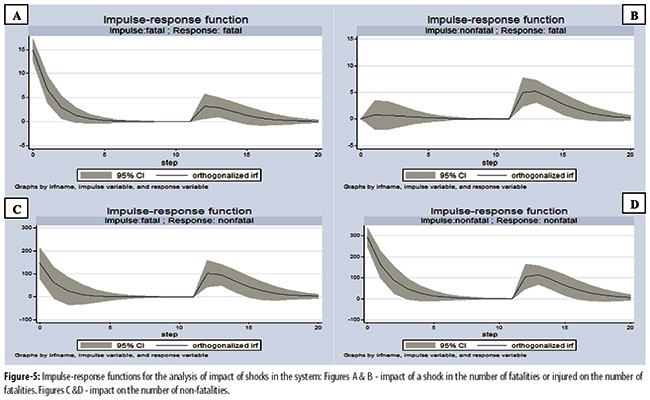