The advent of three-dimensional (3-D) movies in recent decades and their increasing influence on movie viewership have caused them to generate more revenue than two-dimensional (2-D) movies.1 However, the concept of motion images in cinemas is not new; the first commercial movie was released in 1922 in Los Angeles,2 and since then many different techniques have been adopted to make imaging more realistic and appealing.3
However, the "Pokemon Incident" of 1997 caused a stir when a number of Japanese children developed seizures, after watching the famous Pokemon TV show.4,5 It can also not be ignored that gaming console giant Nintendo had "issued a warning that their new hand-held devices should not be viewed in stereoscopic mode by children aged 6 years and under."6 Besides, related issues by other notable tech giants6 may have provoked scepticism towards the wide spread use of 3-D technology.
It is now an accepted fact that stereoscopic images (3-D images) cause an "intense eye accommodation activity"7 such as headaches, nausea, blurred vision, diplopia, asthenopia and visually-induced motion sickness(VIMS), which is characterised by tiredness, headache and soreness of the eye,8,9 collectively known as the 3-D vision syndrome.8,9 The phenomenon of the 3-D vision syndrome has been strengthened by researches conducted in Rome, Italy. The study by Solimini et al. reported frequency of headache, tired eyes and double vision among viewers of 3-D movies and these symptoms were also found positively associated with watching 3-D movies.3 Another study also reported significant presence of eye strain, difficulty in focusing, headache and fullness of head among viewers of 3-D movies.10
The concept of watching 3-D movies was introduced comparatively late in Pakistan, with the first 3-D cinema opening in Karachi only a few years back. Its rousing success gave way to a few more of them propping up in the city, which continue to attract a large viewership. After a thorough literature search and with the best of our knowledge, no substantial data is available on this topic (3-D vision syndrome) in our region. The current study was planned to assess the 3-D vision syndrome among the viewers of 3-Dmovies.

This cross-sectional study was conducted at the Ziauddin University, Karachi, from July to November 2015, and comprised viewers of 3-D movies. In Karachi, there are a number of cinemas but the 3-D facility is available only in few of them. For this purpose three cinemas with facility of 3-D cinema were identified and informed written permission was taken from the management of these cinemas after explaining the purpose of this study. Formal approval was taken from the institutional ethics review board.
The sample size was calculated by using the World Health Organisation\\\'s (WHO) sample size determination software. Keeping confidence level (CI) at 95%, proportion of VIMS 54.8%3 and precision 0.05, the sample size was calculated as 387. However, to avoid data wastage more than 400 individuals were taken into account. Viewers of 3-D movies of both genders from 10-60 years of age and who had seen the 3-D movie within 2 hours were included in this study; the reasons were that the symptoms associated with viewing 3-D images would be present for only a short time and so the respondent might have difficulty in accurately recalling the symptoms. However, those who did not remember the movie title, watched an incomplete movie and those whose general health prior to the movie was not well were excluded from the study as the condition prior to the movie might influence the symptoms associated with watching the movie. Non-probability purposive sampling technique was used both for selection of cinemas and study participants. Study participants were informed prior to data collection about the purpose of the study. Formal consent was obtained from all participants; those who refused to participate were excluded.
Data was collected using a self-administered structured questionnaire. This questionnaire was adopted after informed permission from another study by Solimini AG et al.11 However, certain modifications were incorporated according to our circumstances. A pilot survey was conducted for further improvement in the questionnaire among 50 individuals and these were not the part of original sample of the study. There were four sections in the questionnaire with four to six questions with close-ended options in each section. The first section was about demographic details; second was about health-related individual characteristics specifically to assess visual fatigue reasons and symptoms; the third section was about 3-D movie vision characteristics; and the fourth section was about health assessment before, during and after watching 3-D movies.
Data was analysed using SPSS 20. All qualitative variables were presented as frequency and percentages and all quantitative variables were presented as mean and standard deviation (SD). Count regression analysis was applied with some individuals. Three-D movie characteristics were taken as independent variables and the number of 3-D vision syndrome symptoms during and at the end of the movie as dependent variables. Association was presented as odds ratio (OR) with 95% CI.P<0.05 was considered significant. 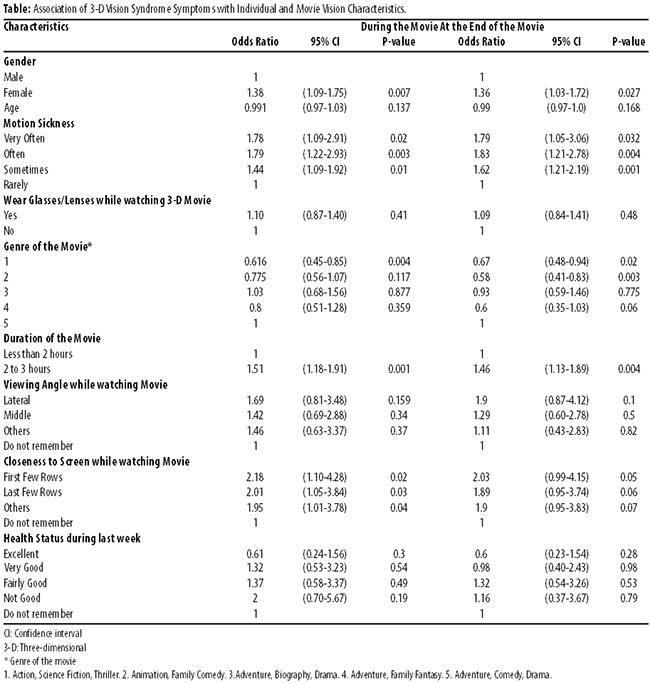 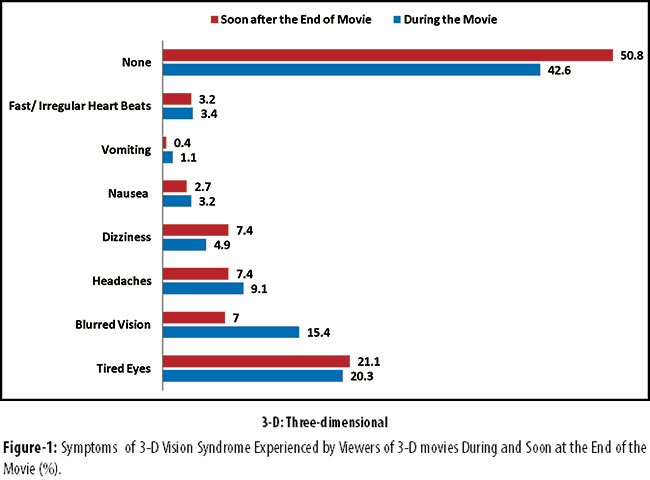 A total of seven symptoms were included in 3-D vision syndrome and these symptoms were further counted together to assess the presence of all symptoms during and at the end of movie (Figure-2).

The results were consistent with our study objective and showed the occurrence of symptoms associated with the 3-D vision syndrome; the findings were also more or less similar to those reported in other researches.3,10-13 However, it is important to note that the resulting symptoms were only associated with watching a 3-D movie that would subside, and could not be classified as something pertaining to a disease or a medical condition.3,10 Tired eyes, blurred vision and headaches were found to be the top 3 symptoms occurring among viewers (Figure1); this goes on to show that visual fatigue has a substantial positive correlation with the viewing of 3-D imagery as confirmed by other researches.14-16 Symptoms of dizziness, vomiting, palpitations were noted to a lesser degree but were also significant, reaffirming the role of VIMS with 3-D visuals.
The reason for collecting data directly from 3-D cinemas was due to the fact that the data could be collected right after the movie ended, and so would provide more authenticity to the recollection of symptoms, when filling in the questionnaire as opposed to Solimini et al., where data was collected from those students and co-authors enrolled in university courses who had seen a 3-D movie within the past 6 months.3 The questionnaires administered to the respondents were short and well designed, did not take much of the respondents time and kept their interest going as opposed to Solimini et al. and Kuze et al., which made use of the Simulator Sickness Questionnaire (SSQ), which took a substantially longer time to fill.10,12 The data provided through the questionnaire sought to link 3-D viewing with associated symptoms of visual fatigue and VIMS.
The research conducted is the first of its kind in Karachi, and provides a base for similar researches to be done on 3-D motion images. However, the research has had its fair share of limitations. The size of the data sample was small compared to other researches to find out 3-D associated symptoms.3,4,10 A number of respondents from younger age groups had difficulty comprehending some of the questions and hence might have provided unreliable data. Another missed aspect was to find out whether the viewer enjoyed the movie or not; this would play a major role as the level of concentration could directly be associated with the onset of symptoms, this was thoroughly covered in Solimini et al., through a 5-point Likert scale.3The questionnaire was self-administered and no observational study was done, which might subject the outcome to bias. Due to constraints, it was also beyond the scope of this research to make use of the SSQ. The SSQ consists of a pre- and post-questionnaire that is divided into an oculomotor factor, disorientation factor and a nausea factor. It could have provided a more comprehensive symptom checklist which would have strengthened the study. Conversely, the outcome of this study may open new research avenues for future researchers as the topic itself is at growing trend.
Future researches on 3-D viewing, especially in Pakistan, should work towards an analytical study design in which the effects between 2-D and3-D movies can be compared. The use of the SSQ questionnaire is also recommended to provide more validity to the results. An analytical study between animated and non-animated 3-D movies should also take place. Researches can also include the effects of lighting and screen size in a 3-D cinema; variations in which can have an effect on the symptoms. As reported that "women with susceptible visual-vestibular system may have more symptoms when watching 3-D movies",10 a similar study should also be conducted on children of younger ages to see its effect on them.

There were symptoms associated with viewing 3-D motion images, which might not seem to be a source of great concern. But as more 3-D movies are being produced and released, there is a possibility that it might be hazardous in the long run, with people developing life-threatening ailments. With 3-D developers working tirelessly to provide the most realistic experience for its audience, they should also \\\'realistically\\\' try to work towards providing a symptom free experience for its viewers.
Disclaimer: None.
Conflict of Interest: None.
Source of Funding: None.