Normal urinary flow is a complex and synchronised process, dependent upon a number of different factors including detrusor contractility, urethral resistance and both autonomic and voluntary nerve innervations, and may even be influenced by abdominal straining. Micturation patterns have also proven to be affected by age, gender, neurological conditions, physiological state and circadian rhythm.1,2
A simple and descriptive measurement of urinary flow rate and general voiding function is provided by uroflowmetry (UFM). This provides not only specific measurements, but also gives a graphical representation of the patient\\\'s stream, and has played an important role in diagnoses and management of various urological ailments for decades.3 It may also be used as a rapid screening tool, alongside measurement of post-void residual (PVR) volume, for the effectiveness of voiding.
Uroflowmetry assessment has been standardised,4 and can be performed in standing, sitting and even crouching positions.5 However, there is much controversy regarding whether or not there is any positional variation on urinary flow rate. In our study, compared the uroflowmetry parameters in healthy male individuals with no known urologic or neurologic pathology, in both sitting and standing positions.
Absolute values of maximum flow rate (Qmax) and PVR are commonly used in clinical decision-making without interpreting the position of patient. The current study was planned to identify whether position of patient needs to be taken into account when interpreting uroflowmetry.

This descriptive, cross-sectional study was conducted at the Department of Urology of Indus Hospital, Karachi, from October 2013 to March 2014, and comprised healthy volunteers. Approval was sought from the institution review board). Young males aged between 18 and 45 years were included using non-probability, convenience sampling. Informed consent was obtained from all participants. Individuals with known neurological deficits, diabetes mellitus, bladder outlet obstruction, urological cancer, or any history of lower urinary tract stone disease were excluded. Sample size was calculated using mean of 19.8 ml/sec and 23.8 ml/sec, and standard deviation (SD) of 7.4 and 7.7 ml/sec in standing and sitting positions,6 respectively, keeping power 90 and alpha 2.5 (2-sided) for rejection of null hypothesis.
Volunteers fitting the inclusion and exclusion criteria were selected from clinics and hospital staff. After obtaining informed consent and giving detailed instructions, the volunteers were asked to come on 2 consecutive days at approximately the same time. One reading was taken in the standing position and the other in the sitting position. The individual values of Qmax, average flow rate (Qave), voiding volume (VV) and PVR were recorded, and transferred to a standardised proforma, along with the volunteer\\\'s name, age and weight and contact info. On completion of this first cycle of testing, the volunteers were advised to undergo the same procedure, in the alternative position (sitting and standing, respectively) on the following day during the prescribed time period, and the process was thus repeated. Each volunteer had been reminded via telephone calls and text messaging for the second test.
SPSS 17 was used for data analysis. Shapiro-Wilk test was applied to check the normality of the quantitative variables like age, weight, height, PVR and UFM parameters. Paired t-test or Wilcoxon test was used to compare UFM parameters (Qmax, Qave, VV and PVR) between the standing and sitting voiding positions. Mean ± SD was calculated for age, Qmax, Qave, and PVR in both positions. P<0.05 was considered statistically significant. Post-stratification with respect to age was done using analysis of variance (ANOVA). 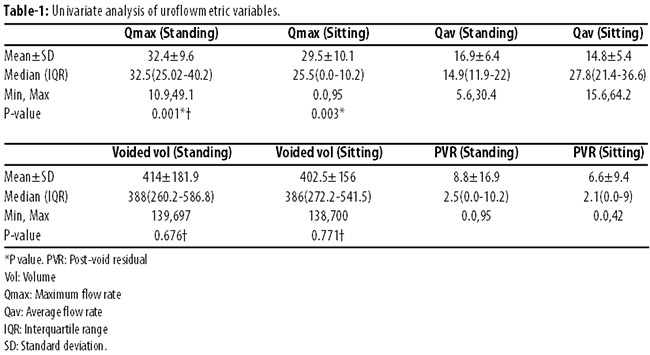 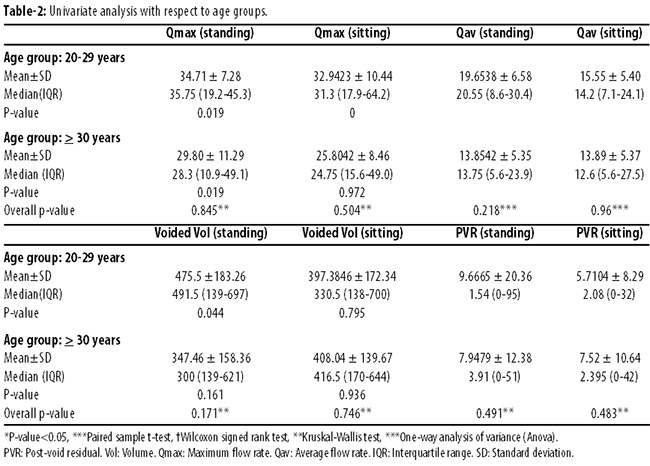 Our study was conducted to assess if a change in voiding position had clinical influence on urinary flow rates. A number of studies have been performed addressing this issue; however, no consensus has yet been established on which position is better in either males or females.
In contrast to our results, studies by Yamanishi, Aghamir and Unsal showed no statistically significant difference in the voiding parameters between sitting and standing positions. Yamanishi and colleagues7 evaluated 21 healthy male patients in five different voiding positions, including standing, sitting, lateral, supine and prone. They reported no difference between standing and sitting position in terms of uroflowmetric parameters. However, they reported relatively significant differences between prone vs supine and prone vs lateral positions, respectively.
In another study, Aghamir et al.8 evaluated 10 healthy males\\\' uroflowmetric parameters in standing and sitting position. Though they also found no difference between different voiding positions in healthy people compared to our study, this is relatively smaller sample group, which could explain the difference in results.
These findings were further supported by Unsal et al.,9 who evaluated the uroflowmetric parameters and PVR of 44 healthy males in standing and sitting positions. This sample group is comparable to that of our study; however, they used maximum flow rate of 15 mL/sec as cut-off point, which was not the case in our study. In another study by the same authors,10 no difference was observed in uroflowmetric parameters in standing and sitting positions while PVR was significantly lower in sitting position, in the 10 benign prostatic hyperplasia (BPH) patients included in their sample.
In a Turkish study conducted on 30 men by Eryildrim et al.,11 a significant difference (p<0.0001) was found between uroflowmetric parameters in both standing and sitting positions, and described improved flow rates in sitting position (31.3±1.2 ml/sec) as compared to standing (26.8±1.3 ml/sec). This study also focuses on a smaller sample size, but focuses on relatively similar age groups. El-Bahnasawy and Fadl12 found that flow rates were higher and PVR lower in sitting than standing position in younger group (age 50 years or less) and BPH patients with higher flow rates (>15 ml/sec) in their cohort of men accustomed to voiding in sitting position. The sample size of this cohort was of 94 patients; however, it focuses on a higher age group, and includes patients with obstructive urinary flow.
Our results are supported by the findings of Uluocak et al.,13 which demonstrated that boys generated lower voiding detrusor pressure in sitting position compared to standing/squatting which were mutually similar; Qmax was correspondingly lower in sitting compared to standing. However, that study focused on children of an average age of 11 years, with non-neurogenic bladder dysfunction. On the other hand, our study included only healthy males, whose mean age was 29 years.
It is also interesting to note that our results are also seconded by those from other parts of our geographical location. In a study on 61 young male participants, Choudhury et al.6 found significant lower flow rates at sitting position (19.8 ± 7.4 ml/sec) than standing position (23.8 ± 7.7 ml/sec), but PVR was still not different between the groups. This similarity with the results of our study could also be attributed to the similarity of cultures and traditions of the participants of both groups.
To exclude the confounding factors of disease process, we inducted only healthy male individuals with no prior lower urinary tract disease, or history of instrumentation. Our results showed significantly lower uroflowmetric parameters in sitting position, with a difference in median Qmax of 7ml/sec and Qav of 1.9ml/sec, respectively. However we found no statistical difference in either voided or postvoid residual volumes among the two positions. Furthermore, we observed that higher maximum flow rates were significant in both age groups, whereas Qave was only significantly higher in our younger age group, with respect to standing position. Our findings of lower urinary flow rates in the sitting position can be explained by a study conducted by Bockus et al.14 Their study reported that sitting position stretches the puborectalis muscle which slightly closes urogenital hiatus, thus causing slight obstruction at urogenital hiatus during micturition, at sitting position independent to presence or absence of any bladder outlet obstruction. This relation can also be correlated anatomically, as described by Rad et al.15 It was found that the average angle between rectum and anal canal was 92° while sitting and becomes 132° when the patient gets to squatting position. This change in angle may lead to the relaxation of puborectalis muscles leading to an easier bladder and bowel evacuation.

The standing voiding position in healthy people influenced uroflowmetry findings, and was associated with higher flow rates. However, different voiding position had no effect on the residual urine volume. This difference was more apparent in younger individuals.
We identified a clinical parameter which should be taken into account when interpreting uroflowmetry. Further studies in patient population are required to find out whether this is true for clinical setting.

Disclaimer: The abstract of this study was presented at the Pakistan Association of Urological Surgeon\\\'s annual Urocon on January 26, 2014.
Conflict of Interest: None.
Source of Funding: None.