Dietary practices and severity of depression. Comparative study among housewives and working women in Karachi

According to current statistical data, the total population of Pakistan is 201,995,540 with women population 98,287,400 (48.66%).1 Women\\\'s social participation has recently increased the number of working mothers, resulting in changes in dietary patterns. Also, working women and housewives can have dissimilar work stresses as well as time limitations resulting in different inclinations for diet, therefore, their habits can influence health outcome.
Depression is described by prolonged and constant unhappiness, lack of interest in pleasurable events, increased or decreased desire for food, disorganised sleep and tiredness, lack of concentration and capability to perform at job as well as at home along with the feeling of uselessness.2-4 This disorder is widespread among women as compared to men.4 The mean overall point prevalence shown by a study is 33.62%.5 Crude estimate for males was18.1% and for females it was much higher at 42.2% in Karachi in 2000.6 It is also extremely co-morbid with eating disorders.7 Various studies emphasise that people with depressive illnesses have unhealthy and improper diet.8
Many studies have highlighted that working women demonstrated higher levels of anxiety as well as depression due to excessive stress at home and work along with a higher level of frustration at work.9 In other studies, the reverse was noted showing that employed females had better emotional status.10,11
The present study focused on educated group expecting basic understanding of healthy diet for this age group. The current study was planned to compare the severity level of depression experienced by the two groups of participants. Moreover, the effects of dietary practices on depression among these groups were also compared. This study tried to manifest the importance of healthy eating by showing the influence of eating practices with maintenance of stable psychological health as well as the effect of doing a job outside the home on overall health status because more working women were witnessed as having none or mild severity of depression.

This comparative, cross-sectional study was conducted at the University of Karachi (UoK) and the Dow University of Health Sciences (DUHS), Karachi, from January to April 2015, and comprised females belonging to middle socio-economic status. Convenience sampling technique was used. Housewives and working women aged between 35-45 years were included. The sample size was calculated using online software OpenEpi (version 3.02), using cross-sectional sample size formula. Considering 95% confidence level with 80% of power, the total calculated sample size was 578 with 289 for each group. We added 4% of non-respondents and therefore rounded up the total sample size to 600, 300 each in the category of housewife and working women.12 Female teachers and doctors employed in the DUHS and UoK comprised working women while housewives were residents of Staff Town of UoK and relatives of male doctors. Dietary practices were recorded in a structured questionnaire through interview. The Patient Health Questionnaire-9 (PHQ-9) was used to measure the levels of depression in the sample.13 Depression levels were calculated by allocating numbers of 0, 1, 2 and 3 to the preferred options by participants, i.e.: not at all, several days, more than half the days, and nearly every day, respectively. PHQ-9 overall score for the nine options covers 0 to 27; for example, the score of 16 states that 3 items scored 1, 2 items scored 2, and 3 items scored 3. Scores of 5, 10, 15 and 20 show mild, moderate, moderately severe and severe depression, respectively. In other words, minimal is 0-4, mild 5-9, moderate 10-14, moderately severe 15-19 and severe 20-27. During analysis it was observed that none of the study groups responded to the questions in PHQ-9 which could be cited under the category of severe depression; therefore, the category of severe depression was not included in calculation. SPSS 21 was used for data analysis. P<0.05 was considered significant.

Dietary habits had affected the severity of depression in the study participants, especially working women, and better health in context of severity of depression was noted in them.
In the category of women who showed none/minimal depression, the highest number of participants was of those who consumed 3 meals [18(14.5%) housewives and 114(52.8%) working women], 8 or more glasses of water per day [16(16%) housewives and 94(48%) working women] and having fast food occasionally [20(12%) housewives and 76(44.7%) working women]. But at the same time a significant difference was noted in minimal category, between housewives and working women having two and three meals per day as well as taking fast food once a week (p<0.001). The results of fruit and fish/poultry consumption were not significant when compared between the study groups. Although, surprisingly, high number of women with none or minimal depression was witnessed in participants who rarely consumed vegetables. However, among those, the working class was more in number(Table-2). 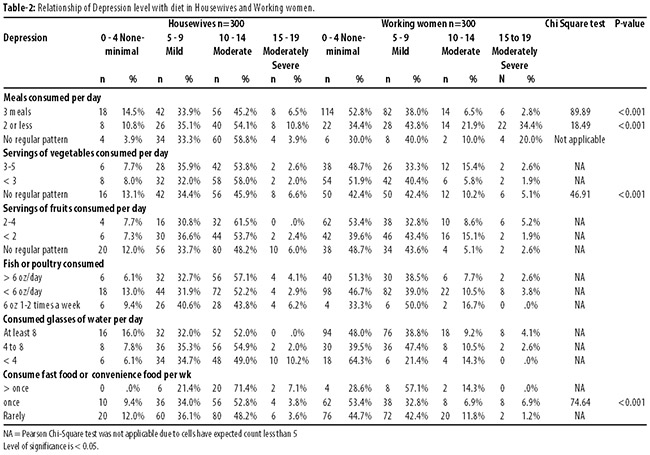 Overall, more housewives were seen depressed, with the result being significant (chi-square=159.63, p<0.001). The frequency of none or minimal depression was higher in working women as compared to housewives. Furthermore, a majority of housewives had moderate depression. Very few women in both groups exhibited moderately severe depression. The percentage of mild severity was also comparable (Table-3).

The occurrence of depression was noted in the female population in Karachi, showing increased severity in housewives equal to 35.6%.14 This finding was in coherence with our study results.
In our study, it was observed that housewives are more depressed than working women, whereas another study indicated significantly higher degree of depression in working mothers than their counterparts. Although working women had higher education and socio-economic levels, they showed high depression levels mainly due to stressful life events. The reasons advocated that working mothers had less time for making friends and enjoying leisure time. On the other hand, non-working mothers were constantly engaged in children and by household tasks, whereas working mothers could not share this family bonding.15
Another study finding also revealed that housewives were more depressed than working ladies as they underestimate themselves for less prominence and admiration, therefore, not satisfied with their status and as a result more depressed than working females.16 Another study showed that housewives, despite being educated, suffer from low self-esteem as compared to working women.17
Association of traditional diets with higher depression levels in women were also identified in a study done in 2010.18 Almost similar results were obtained in our study where none or minimal depression category had a greater number of working women as compared to housewives and higher number of housewives showed moderate depression. However, mild depression was observed in more working women (Table-3). In another study, housewives were noted to be at a greater risk of prenatal depression.19
In our study, we observed that more working women had normal PHQ-9 score as well as better dietary habits as compared to housewives. This demonstrated that being a working woman helps in maintaining improved mental health and diet preferences.
However, advance studies with bigger samples and a prospective design are needed to measure association of dietary practices with depression in the two groups.

Though differences were observed in dietary habits of both the study groups, being a housewife was the main reason of exhibiting moderate depression compared to working women who mostly exhibited none or minimal depression in most of the categories of dietary practices.

We are grateful to Mr. Syed Arif Ali, lecturer at the Department of Research at the DUHS, for his help in the statistical analysis.