Cerebral Autosomal Dominant Arteriopathy with Subcortical Infarcts and Leukoencephalopathy (CADASIL) is a disease which manifests as migraine headaches and transient ischaemic attacks (TIA) between the ages 40 and 50 years.1 It is an inherited disorder, with mutations in NOTCH3 gene. The abnormal NOTCH3 receptor protein accumulates in cerebral arteries and result in ischaemic manifestations of the disease.2,3 CADASIL has a worldwide distribution. The prevalence of CADASIL has been estimated as 1 per 100, 000 in United Kingdom,4 1.98 per 100, 000 in the west of Scotland,5 and 4.1 per 100, 000 in central Italy.6 Besides migraine and recurrent strokes, patients suffer from dementia and psychiatric disturbances.7 Most patients experience migraine attacks for a long time, which are followed by TIA and strokes. Eventually, frontal lobe involvement and symptoms of subcortical dementia are often experienced.8 Gait apraxia, urinary incontinence and pseudobulbar palsy have also been noted in CADASIL patients.2 Difficulties in diagnosing CADASIL have been well appreciated due to the heterogeneity of genetic defects.9 Nevertheless, it remains important to correctly diagnose CADASIL from other more common causes of stroke, as risk reduction through modifiable risk factors can be more effective in \\\'benign\\\' causes of stroke, whereas more concrete treatment options needs to be explored for genetic defects causing stroke in CADASIL-like diseases.

MRS and MRSI in CADASIL patients

Magnetic resonance imaging (MRI) is a valuable tool for imaging brain parenchyma, but carries the disadvantage of missing pathology on the molecular level. Magnetic resonance spectroscopy (MRS) overcomes this difficulty by measuring metabolite concentrations along with taking images of the area examined. The method is suitable for measuring levels of different metabolites in vivo,10 and has been used to study CADASIL patients. A big advantage of MRS is that it is a safe non-invasive technique,11 which can be performed to detect early molecular changes before any detectable structural magnetic resonance findings.
According to our knowledge, articles focusing on MRS in CADASIL patients have not been reviewed. This review was planned to summarise the metabolic profile of brain regions in CADASIL patients. Six articles were found on PubMed database, Scopus and Google Scholar over the 1998-2010 period using the search terms "metabolites", "spectroscopy", and "CADASIL".

Imaging technique and metabolite findings of the studies under review were compared (Table). 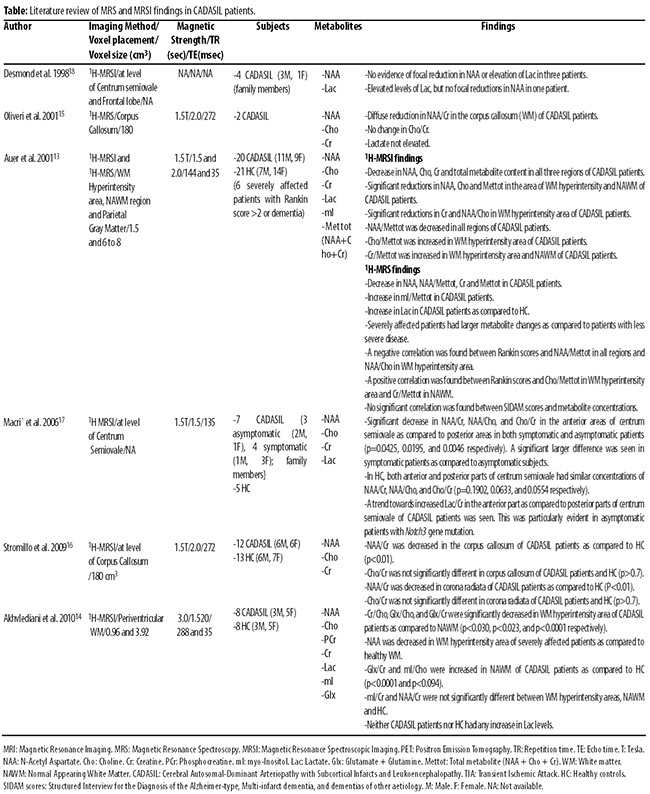 Individual metabolites have been elaborated below:

N-Acetyl Aspartate (NAA) is a marker of axonal integrity. It is made and stored in the neurons and regulated by hydrolysis in the oligodendrocytes. Decreased amount of NAA in the brain has been viewed as a reduction in neuron number or viability. Non-viability is difficult to assess from NAA alone, since decreased NAA have been recorded in viable neurons as well,12 reflecting neuronal or axonal dysfunction.
The absolute concentration of NAA has been found reduced in the white matter (WM) hyperintensities,13,14 normal appearing white matter (NAWM) and the parietal gray matter of CADASIL patients.13 NAA/Creatine (NAA/Cr) was found decreased in the corpus callosum,15,16 corona radiata,16 and anterior portion of centrum semiovale of CADASIL patients.17 NAA/Choline (NAA/Cho) was also found decreased in the anterior portion of centrum semiovale,17 and WM hyperintensities of affected patients.13 Desmond et al. in 1998 reported no significant change in NAA in the centrum semiovale and the frontal lobe in CADASIL patients.18

Human neurons have a great capacity to increase glucose transport, and support glycolysis and respiration in a glucose-rich environment. The energy pathways are largely stimulated by glutamate (Glu). Lactate (Lac) produced from the glucose contributes to only a minor fraction of the total amount found in the brain. Lac is an energy-rich molecule for the brain. High blood Lac causes a large influx of Lac into the brain tissue, which is particularly evident in strenuous exercise.19 The converse is also true. Although, glucose acts as a major source of energy in the brain, Lac acts as a valuable substrate when high concentrations are available in the blood,19 for example in conditions leading to increased anaerobic glycolysis.
Increased Lac in WM hyperintensities,13 and in the anterior portion of centrum semiovale as compared to the posterior portion has been recorded in CADASIL patients.17 Desmond et al. in 1998 found no change in Lac in the centrum semiovale and frontal lobe of three affected patients, but a rise in Lac in the subcortical WM of right sided frontal lobe in one patient.18 Akhvlediani et al. in 2010 found increased concentration of the ratio (Glu + Glutamine)/Creatine (Glx/Cr) in NAWM of CADASIL patients. They also found a decreased concentration of Glx/Cho in WM hyperintensities; however, neither the patients nor the healthy controls had any significant rise in Lac concentration.14
CholineCho is a molecule which is linked to lipid metabolism and formation of membranes. Increased turnover of lipid metabolism results in higher peak of Cho recorded during MRS.20 A fall in Cho peak has been shown to signify an ischaemic event of even a short duration in a brain of normal neuronal integrity.21
In CADASIL patients, a decrease in Cho concentration has been found in the parietal cortex, NAWM and WM hyperintensities.13 The ratio Cho/Cr has also been found decreased in the anterior part of centrum semiovale of CADASIL patients.17 In the corpus callosum, Cho/Cr was not significantly changed in affected individuals.15,16 Similarly in corona radiata, Cho/Cr was not different in patients and healthy controls.16 Although a decrease in Cho was found in WM hyperintensities, an increase was noted in the ratio Cho/(NAA+Cho+Cr), signifying a greater fall in NAA and Cr peaks.13

Cr is a rich source of energy for cells. Creatine kinase is an enzyme which links Cr to phosphate, making it a good reserve of energy in the brain tissue. Cr is actively transported into tissues like muscles and brain, requiring a great amount of energy.22
A decrease in Cr concentration has been found in regions of WM hyperintensities, NAWM, and parietal gray matter of CADASIL patients.13 The ratio Cr/Cho was significantly decreased in WM hyperintensity regions of CADASIL patients as compared to healthy controls.14 However, the ratio Cr/(NAA+Cho+Cr) was increased in both normal and abnormal appearing WM.13

Myoinositol (mI) is abundantly found in the human brain, mainly in the glial tissue. It functions as an important osmolyte and its levels vary in different diseases. An increase in mI signifies increased turnover of cell membranes or damage to myelin encircling the neurons.23 In CADASIL patients, a trend towards increased mI/Cho has been found in the NAWM of the brain (p<0.094).14 An increase in the ratio mI/(NAA + Cho + Cr) has also been seen in the WM hyperintensity regions.13

Magnetic resonance has improved our understanding towards CADASIL disease. Although CADASIL patients usually present with symptoms in their 40s or 50s, but MRI can show the signs of disease much earlier. The patients and their families have been extensively evaluated with MRI for early diagnosis of disease. Ischaemic lesions in the cortical and subcortical areas have been noticed in CADASIL patients. The WM regions are among the most commonly affected areas. In 90% of patients there are hyperintensities located in WM regions of brain on T2-weighted MRI images. They are more numerous in periventricular WM compared to superficial WM.1 Hyperintensities also occur in brainstem and basal ganglia. Many patients show hypointensities on T1-weighted images. It is clear that different parts of the brain have different vulnerability to ischaemia in CADASIL disease.1 Ischaemic lesions are predominantly found in the periventricular regions and the centrum semiovale. Additional lacunar infarcts are often seen in WM and basal ganglia.24,25
MRS has the added advantage over MRI of focussing at a molecular level. The beauty of MRS and MRSI is evident from the findings of reviewed articles, illustrating changes in metabolite levels in NAWM areas on an MRI scan. WM hypertintensities in the external capsule and temporopolar region have been widely accepted as pathognomic for CADASIL,26 but MRS goes beyond to detect changes in normal-appearing regions. MRS thus forms an ideal tool for detecting pathology earlier on in the disease progression of CADASIL patients.
Other modalities, including positron emission tomography (PET) and Doppler sonography have been useful for detecting reduction in cerebral blood flow in CADASIL patients.26 A trend towards reduced blood flow in NAWM has also been documented.27 Autopsy findings of CADASIL patients are often in congruence with the imaging results, demonstrating lacunar infarcts in WM and deep-seated grey matter, with sparing of cerebral cortex.26 In spite of these advances and successes in imaging CADASIL patients, testing for genetic alterations remain the gold standard for diagnosing CADASIL.28
With limited research on metabolite levels in CADASIL patients, it is not possible to make generalisations. Currently, we have a good set of data, but more research is needed to understand the mechanics in greater depth. Present research suggests that NAA/Cr decreases in corpus callosum, and NAA, Cho and Cr decrease in WM hyper-intense regions, NAWM and parietal grey matter. Isolated findings from a small number of manuscripts, with a small number of patient populations covered by each, requires further research to validate these results.
It is fair to rely on genetics for a definitive diagnosis, since imaging studies do not yield a similar diagnostic value. However, currently drugs targeting affected genes are not in our knowledge, and usually a considerable amount of time is exercised in developing such gene-targeting therapies, which are often not always successful. Hence, many times clinicians rely on therapies targeted for delaying the disease progression or causing a remission. Understanding the pathogenesis on a molecular level using MRS and MRSI is a big step towards detecting disease onset, mapping its progression, and aiming towards stopping the pathways dedicated to leave the patient with a stroke.

MRS is a valuable tool for detecting subtle abnormalities in CADASIL patients. Normal-looking brain regions on MRI show abnormal metabolite concentrations on MRS. Decreased levels of NAA in the regions like centrum semiovale, corona radiata, grey matter and WM suggest neuronal dysfunction. There is a dire need to perform and interpret spectroscopic data in more patients to better understand this disease.