Sexual self-esteem in mothers of normal and mentally-retarded children

With the birth of a mentally-retarded baby, a family may be negatively influenced from different aspects.1 In such conditions, mothers may particularly blame themselves instead of accepting and supporting the baby, something which may lead to negative self-esteem resulting in disturbing the couple\\\'s relationships and endangering their sexual satisfaction.2 Both high sexual satisfaction and sexual self-esteem play an important role in promoting one\\\'s sexual, mental, and physical health, and one\\\'s public well-being condition has linked into their sexual, mental, and physical health status in such a way that they should be taken into account in evaluating their general health.2 However, some researchers have considered the sexual self-esteem not only as an important component in sexual identity but also as a physical image in psychological well-being.3 Sexual self-esteem refers to one\\\'s desirable or undesirable feelings toward her sexuality4 which includes emotional response to her evaluating thoughts, emotions, and sexual behaviours.5 Sexual self-esteem also shows the female\\\'s evaluating herself as a sexual partner6 and has a basic role in individuals\\\' ability to preserve a close relationship with their spouses and enjoy having sex with them.7
Various studies have investigated the effect of different life experiences on decreasing sexual self-esteem. For example, some studies have indicated that the disabled women enjoyed lower degrees of sexual self-esteem, sexual satisfaction, and life satisfaction compared to healthy women.3
However, the effect of having a mentally-retarded child on the mother\\\'s sexual self-esteem is an area of study which has not yet been dealt with in Iran or abroad. Thus, this study is an attempt to compare the sexual self-esteem and its components in mothers with normal children and mothers with mentally-retarded children in Qaen city, in 2014.

This was a case-control study which was conducted in Qaen city, Iran, during 2013-2014. The sample included two groups: the first group was selected based on convenient sampling method and included all the sixty mothers with one mentally-retarded girl student at elementary school level, and the second group consisted of 60 mothers with normal girl students from elementary school level who were chosen from among a total of 5800 mothers, from 23 elementary schools, based on multistage randomized sampling method.
The inclusion criteria were as follows: the ability to read and write in Persian, having only one mentally-retarded child regarding the case group, having at least one normal child regarding the control group, claiming informed consent to participate in the study, being in the age range of 20-60 years, and not suffering from mental disorders. To observe the research ethics, first, the participants were briefed about the study and the informed consent was obtained. Then, they were asked to fill in the sexual self-esteem questionnaire.
The forty-three item questionnaire (Zeanah & Schwarz, 1996) included five subscales of skill and experience (13 items), attractiveness (9 items), control (5 items), moral judgment (11 items), and adaptiveness (5 items), the reliability of which has been estimated through Cronbach Alpha as 0.93, 0.94, 0.88, 0.85, and 0.85, respectively. The construct validity of the questionnaire has been investigated through its correlation with Rosenberg\\\'s self-esteem scale as 0.44, 0.56, 0.45, 0.38, and 0.45 for the above-mentioned subscales, respectively.9
The questionnaire has been validated in Persian in Iran. The validity and reliability of the questionnaire were also confirmed by Garousi et al.9 Moreover, its validity and reliability were obtained by content validity and Cronbach Alpha over 0.70.10 Further, in another study, its validity and reliability were estimated through content validity and Cronbach Alpha over 0.70.11 In this study, the reliability of the questionnaire was 0.98, and that of its aforementioned subscales were determined 0.94, 0.89, 0.74, 0.91 and 0.85, respectively, through Cronbach Alpha.
To conduct the study, after obtaining written permission from Education Office in Qaen, we administered the questionnaires to the target population. Then, the collected data were analyzed employing t-test through SPSS software version 15. 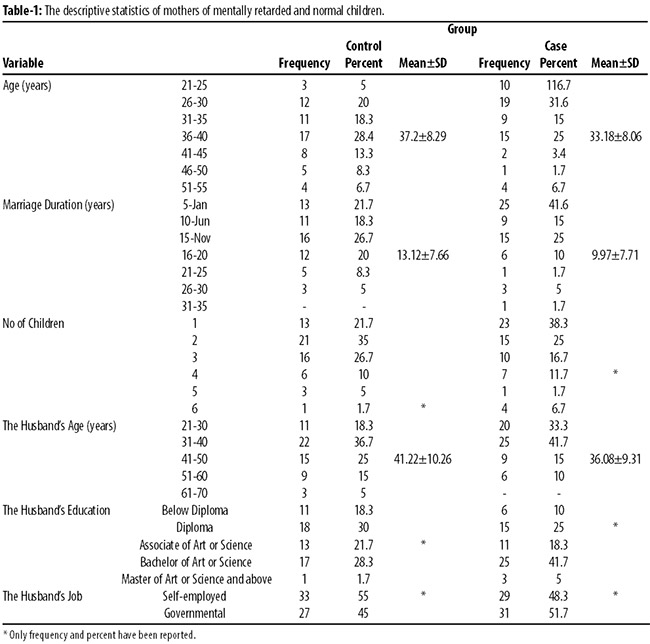 Table-1 shows the descriptive statistics in case and control groups with respect to the mean age, marriage duration, the number of children, the age, education, and job of husbands in mothers with normal children and that of the mentally-retarded ones. 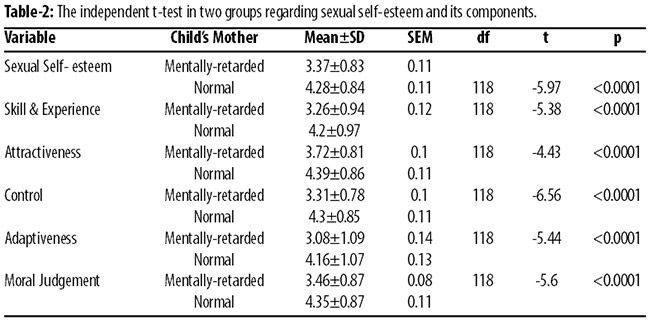 The findings showed that there was a significant difference between mothers of normal children and the mothers of children with mental retardation regarding sexual self-esteem. To put it another way, the mothers of normal children possessed a higher degree of sexual self-esteem in comparison with the mothers of children with mental retardation. Although we found no research directly relating to our study, the findings were in line with those of some similar studies.3,8 Probably, a mentally-retarded child can cause stress for the parents especially for the mother who is responsible for the child\\\'s parenting, and the stress induced can negatively influence marital satisfaction, the couple\\\'s sexual relations, and consequently their sexual self-esteem. Instead of accepting the children, the mothers blame themselves for having such children and have negative self-esteem. Probably, the mothers with mentally-retarded children show negative emotional reactions which affect the parents\\\' self-concept and sexual self-esteem, leading to less enjoyment in their sexual relations lest their next children will be mentally-retarded.
The results of this study also showed that there was a significant difference between the components of sexual self-esteem in mothers of normal children and the mothers with mentally retardated children. In other words, the mothers of normal children significantly achieved higher scores in five components of sexual self-esteem. We found no research that could directly compare with our findings, but it can be said that stress can negatively influence the woman\\\'s sexual performance and sexual self-esteem if not accompanied by effective stress-coping strategies in the mothers of children with mental retardation so that these mothers will evaluate and consider themselves as bad sexual partners for the husband. In such conditions, these mothers may have various ideas regarding their beauty, may not be satisfied with the husband, may fail to control their sexual thoughts, emotions, feelings, and behaviours, and difficulty in adopting moral values with their sexual behaviours/beliefs. Moreover, they may not be able to adapt their sexual experiences with the husband\\\'s desires. Naturally, when these problems appear for the mothers, they can negatively influence not only the mother\\\'s sexual performance but also that of her husband. It is concluded that sexual self-esteem in mothers with mentally-retarded children is lower compared with that of their normal counterparts. Thus, it is recommended that preventive teaching be employed to improve the low sexual self-esteem of these mothers.
In this study, several factors were not taken into consideration, which could be regarded as some limitations affecting the outcomes. The instrument used to collect data was related to self-evaluation questionnaires in which there is some sort of bias, and the husbands\\\' ideas regarding cognitive components and its subcomponents have not been included. Moreover, due to some cultural issues, the participants showed some sort of shyness in responding to some items of the questionnaire as some questions aimed at private and personal issues. Besides, the sample in the case group was decided upon based on convenient sampling and included only 60 mothers. Hence, the sample size was to some extent limited, through which investigating some other demographic variables affecting sexual self-esteem such as age, education, and socio-economic status was not possible. Similarly, the researchers could not include other individual (e. g., thoughts, emotions, and feelings), physical (e. g., beauty), and social factors (e. g., family and social support).

Disclaimer: None.
Conflict of Interest: None.
Funding Disclosure: None.