Thrombotic microangiopathy (TMA) often needs detailed investigations to identify the etiology especially in patients who present with multisystem pathology.
Causes of TMA include thrombotic thrombocytopenic purpura, haemolytic uraemic syndrome, drug-induced TMA, HELLP syndrome, systemic infections and autoimmune disorders amongst many.
Considering gravity of TMA, the time window between presentation and treatment is narrow, and multiple treatments are often initiated simultaneously based on clinical suspicion.
Our patient was a 43 year old female, known diabetic with a history of intracranial haemorrhage (managed conservatively). She presented to the ER with complaints of high grade fever, haematemesis and melena. These complaints were preceded by nausea, vomiting and diarrhoea. Her physical examination was unremarkable with all systems intact.
The initial labs showed anaemia (Hb=7.1g/dl) and thrombocytopenia (plt=84*10^9/L) with 7% schistocytes on peripheral smear. Creatinine was 4.01mg/dl, serum lactic acid was 40.8mg/dl and urine dipstick showed ++ WBCs. Patient\\\'s PT, aPTT, LDH and haptoglobin were in normal range. A working diagnosis of urosepsis with MAHA was formulated. Patient\\\'s mental status started to deteriorate soon after admission. PLEX (plasma exchange) was initiated on a strong clinical suspicion of TTP (pentad of fever, MAHA, thrombocytopenia, renal failure, mental changes). Strikingly, LDH was normal and stayed unremarkable throughout her clinical course casting a doubt on the diagnosis of TTP. ADAMTS13 levels were not done because of inavailability. On Day-2, blood cultures showed E.coli ESBL (non O157:H7 on serology) sensitive to meropenem, which was started.Even after daily sessions of PLEX for 5 days, mental status failed to improve and platelets kept declining with a nadir of 31, and PLEX and steroids were eventually stopped. Due to ESBL sepsis, rituximab was not attempted. 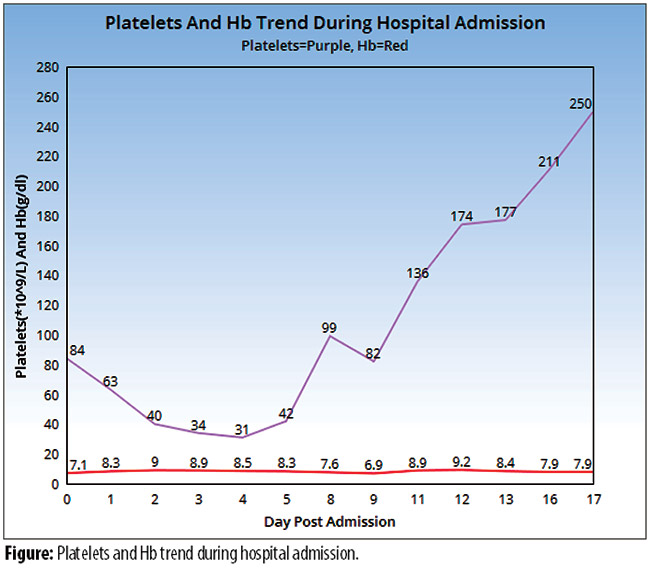 By week-2, she started to show rapid clinical improvement with blood work indicating resolving sepsis and AKI, with rising platelets.
Patient was discharged on Day-17 in a stable condition.
This case highlights how Non O157:H7 E.coli ESBL induced sepsis could produce a classical pentad of TTP-HUS. With the management of HUS being mainly supportive and little evidence about the positive role of antibiotics1 and PLEX,2 E.coli ESBL sepsis needs aggressive management with appropriate antibiotics. In our patient, TMA induced by this particular Non O157:H7 strain of E.coli responded to meropenem.
Another interesting phenomenon is the development of DIC induced secondary TTP which can independently cause TMA and renal failure.3
Possibility of non H7:O157 E.coli ESBL producing a TTP-HUS picture should be considered in patients presenting with classic TTP pentad.

Hysteroscopic Myomectomy can lead to intrauterine adhesions and infertility