Objective: To determine the frequency of neck pain and its association with risk factors among software engineers.
Methods: This descriptive, cross-sectional study was conducted at the Dow University of Health Sciences, Karachi, from February to March 2016, and comprised software engineers from 19 different locations. Non-probability purposive sampling technique was used to select individuals spending at least 6 hours in front of computer screens every day and having a work experience of at least 6 months. Data were collected using a self-administrable questionnaire. SPSS 21 was used for data analysis.
Results: Of the 185 participants, 49(26.5%) had neck pain at the time of data-gathering, while 136(73.5%) reported no pain. However, 119(64.32%) participants had a previous history of neck pain. Other factors like smoking, physical inactivity, history of any muscular pain and neck pain, uncomfortable workstation, and work-related mental stress and insufficient sleep at night, were found to be significantly associated with current neck pain (p<0.05 each).
Conclusion: Intensive computer users are likely to experience at least one episode of computer-associated neck pain.
Keywords: Ergonomics, Musculoskeletal pain, Neck pain, Risk Factors, Software engineering. (JPMA 67: 1009; 2017)

Many studies conducted in different parts of the globe suggest that among different work-related musculoskeletal disorders (WRMSDs) associated with computer use, work-related neck pain (WRNP) is more prevalent in computer users. Literature revealed that the studies attesting to this fact were conducted in Nigeria (33.9%),1 Turkey (21.6%),2 Estonia (51%),3 Sweden (50%),4 Finland (20.7%),5 Iran (54.9 %),6 India ( 45.2%)7 (58.5 %),8 (48.6%)9 and Pakistan (16.8%).10
Neck pain has been established as a disabling condition which runs in periods of remission and relapses. It is a cause of significant movement restrictions in computer users in their late 20s.11 Most cases follow an episodic course during the lifetime.12 On the basis of clinical symptoms and signs, the most frequently presented neck pain cases are of trapezius myalgia (38%), tension neck syndrome (17%) and cervicalgia (17%), whereas myofascial pain syndrome (MPS) of neck and shoulder,13 and development of myofascial trigger points (MTrPs) on trapezius have also been suggested to be causal pathways for pain.14 Different individual, psychosocial, physical and environmental factors are thought to play roles in the origination of neck pain.12,15
Numerous studies have been conducted regarding prevention and management of neck pain arisen from computer use. Maintaining proper posture remains a vital element in the prevention of neck pain. Several interventions have been proposed to rectify the postures of computer users through self-efficacy, including internet training16 and real-time visual feedback.17 Nevertheless, education regarding posture has its role in preventing adverse postures and movements.18 Proper rest breaks, physical exercise, adequate sleep and relaxation at home are effective strategies to cope with the overall health problems among frequent computer users such as software professionals.19
Use of an external keyboard has shown to be beneficial in reducing the neck and shoulder pain.20,21 In environments where external devices are not available a 12° incline placed on a standard height desk may be the most desirable peripheral for portable computers for improving head and neck posture,22 whereas setting the monitor tilt angle at 130° in a notebook computer has shown to significantly reduce the neck and shoulder discomfort.23 Rest, physiotherapy, nonsteroidal anti-inflammatory drugs (NSAIDS) and muscle relaxants have also been reported to show significant improvements in WRNP in computer users.10
Within the information technology (IT) sector, software professionals are frequent victims to computer-associated neck pain.7,8,19,24,25 They spend long hours every day in front of their computer screens engrossed in stressful mental work, which, if not given consideration to proper precautions, may lead to debilitating consequences, such as pain, paraesthesia, subjective weakness in upper extremity,26 decreased conduction velocity in peripheral nerves,26 and even disturbances in the postural balance.27
Because of the paucity of the evidence in Pakistan, there has been a need to get a glimpse of the true picture of WRNP in the country and its associated risk factors in order to develop better strategies for prevention and provision of quality treatment to all the computer users. The current study was planned to find associations between computer-associated neck pain and its potential risk factors, which would also be helpful in paving way for the future prospective studies. This study was basically directed towards software engineers since they spend more time with computers than most other users, thus are more susceptible to neck pain and all the variables and risk factors could best be studied by gathering data from this group of population.

This descriptive, cross-sectional study was conducted at the Department of Physiotherapy, Institute of Physical Medicine and Rehabilitation of the Dow University of Health Sciences, Karachi, from February to March 2016, and comprised software engineers from 19 different locations within the city. Participants were selected using non-probability purposive sampling technique. Approval was obtained from the institutional review board prior to data-collection. Data were collected through a self-administrable questionnaire after obtaining a written informed consent from all the participants. A considerable amount of literature from Google Scholar, PubMed and PubMed Central had been reviewed in order to go through all the existing evidence and to design a structured questionnaire based on previous findings. Care had been exercised in the questionnaire formulation to make questions simple, productive and also to make them cover all the important variables to further explore the potential risk factors. The minimum sample size was calculated using OpenEpi by taking the frequency of neck pain as 31% with margin of error as 7% and the confidence interval (CI) as 95%.7
Software engineers with at least 6 sitting hours of working at computer every day and having a work experience of at least 6 months were included. Software designers, developers, coders, project managers, quality assurance professionals were all considered software engineers. Young adults aged 20-35 years of either gender were included to rule out any age-related degenerative pathology which could mimic postural neck pain. Questionnaires missing crucial information were excluded, while only obvious facts which could be found by analysing existing information were filled in by the researcher. SPSS 21 was used for data analysis. Chi-square test, as a test of significance, was applied to find association between neck pain and potential risk factors. P<0.05 was considered statistically significant. 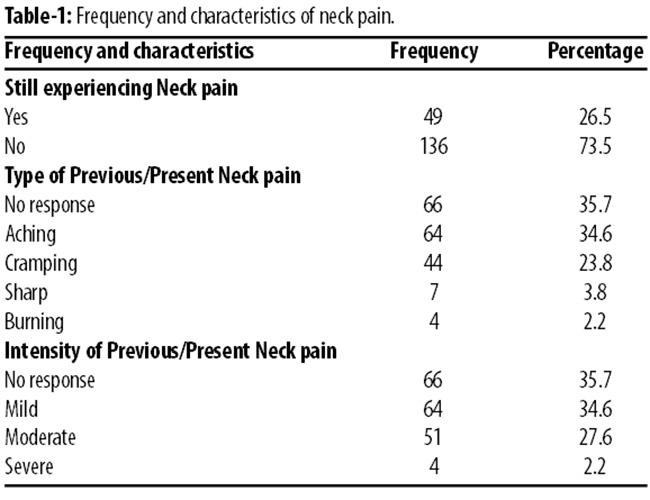 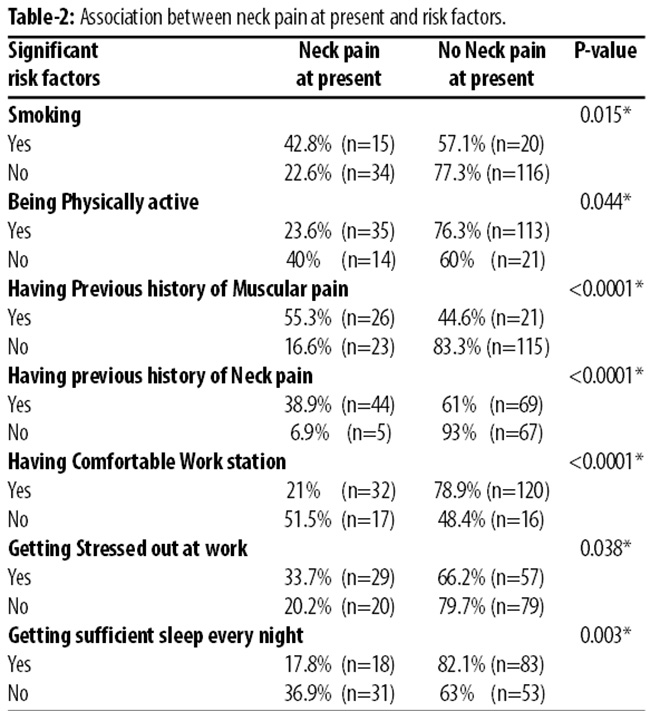 The results of this study showed that neck pain frequency at present was only about one-fourth of the total sample size, which are in contrast to the results of other recent studies conducted in South Asia, reporting neck pain to be the most common musculoskeletal disorder in software professionals.7,8,24,25 However, our study also showed that a majority of the software people had suffered from neck pain at some point in their career which indicates that relapses are likely to occur in neck-pain sufferers.
Out of the 21 potential risk factors, seven were found to be significantly associated with neck pain which are also supported by evidence from the literature, i.e. smoking,28 physical inactivity,29 previous history of any muscular pain, especially in the neck,28 poor workstation design24,28 and mental stressors.30 Insufficient sleep can be considered as a novel finding of this study, however, previous studies have found higher perceived exertion and mental tiredness to be associated with neck pain.4,24
Other than risk factors, significant features of neck pain included stiffness in neck and upper back, numbness in the upper extremity, and restricted neck movements in all planes. Among the types and intensities, aching type and mild intensity were most frequently reported. Some associated factors, albeit previously proven, were found insignificant in this study, presumably because of its relatively smaller sample size. Nevertheless, they are intentionally being discussed as this refutation might have some scientific implications. The factors which were proven insignificant included forwarded head posture, elevated keyboard and mouse levels, and lean and obese body types.
Despite the fact that meticulous effort has been put into this research study and from the literature review to the result analysis every step has been taken very cautiously, this study has certain limitations. Since this study has been carried out on a limited number of subjects in the city of Karachi only, we cannot claim to have found the true picture of neck pain in the entire country. Secondly, organisational discipline in the majority of the settings demanded that the researcher should not have direct access to the subjects/employees, which left a slight possibility that a few subjects might have filled in inappropriate information out of misunderstanding. Therefore, demographic risk factors which have been proven in previous studies, such as female gender, middle to older age and increased body mass index (BMI), were not used to draw associations in this study because of the risk of inaccurate information provided by the subjects.
However, the data from the target population were sufficient to be generalised to all the computer users and could reflect that people who spend six or more hours against computer screens every day, are more susceptible to getting neck pain. Moreover, their chances of getting neck pain would increase significantly if they smoked, had previous history of any muscular pain or had uncomfortable workstation. Mental stress, physical inactivity and not getting sufficient sleep could merely be a reflection of an excessive workload. To a first approximation, one can infer that decreased workload in effect can reduce the chances of acquiring neck or any other muscular pain as it has already been established that a high perceived exertion and psychological stress could manifest as neck pain and other symptoms in the neck and shoulder.4,30

Intensive computer users, i.e. software professionals, are likely to experience at least one episode of computer-associated neck pain. Smoking, physical inactivity, previous history of any muscular pain (especially in the neck), poor workstation design, mental stressors and insufficient sleep played key roles in the development of the neck pain.
Acknowledgments: We are grateful to all the participants, especially Mr. Affan Hasan, whose dedication had been instrumental in the collection of data.


Disclaimer: None.
Conflict of Interest: None.
Source of Funding: None.